December 3 2015
56
The popular American television channel CNN, giving the story of the Russian airbase Khmeimim (Syria), spoke about some of the "fears" of the American air force. The fact is that the C-400 air defense systems, deployed by Russians in the region, can “accidentally” shoot down US military aircraft. Where exactly are they shot down? Well, of course, over the territory of Turkey! 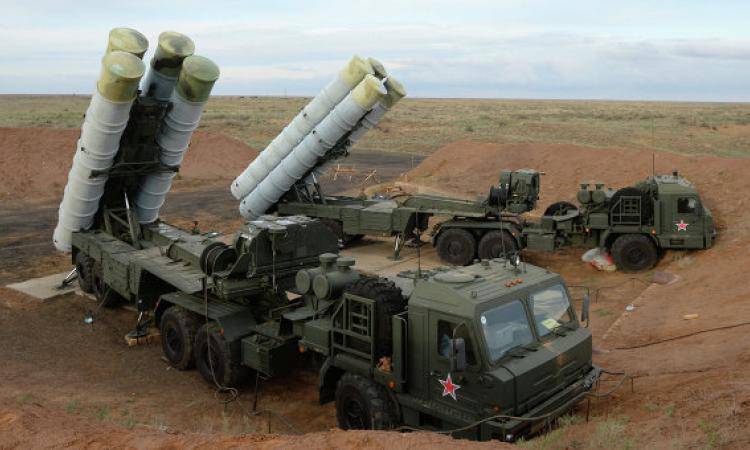 On Wednesday last week, the agency said, it became known that Vladimir Putin approved the request of the Ministry of Defense to deploy S-400 complexes at the Khmeimim airbase. SAM during the day was deployed military transport aviation from the suburbs. This was reported to the agency by a representative of the Aerospace Forces of the Russian Federation.

The C-400, together with the Fort complex of the Moskva missile cruiser, will ensure the safety of the flights of the Russian air group and will destroy any targets that pose a danger to it.

Gazeta.ru reminds that the day after the Su-24 catastrophe, Russian Defense Minister Sergei Shoigu said at a board meeting that in response to Turkey’s actions, C-400 Triumph anti-aircraft missile systems would be deployed to Syria.

“We placed it for the first time abroad, although for several years it has been serially supplied in several divisions a year to the Russian army and has been widely used at large operational-tactical exercises, such as, for example,“ Center-2015 ”this year. The capabilities of this complex are very large, roughly speaking, we can see with its radar all air targets within a radius of the order of 500 km, if it is located in Hmeimim, that is, we can see the territory of Turkey on 250-350 km, depending on the terrain ” - told Viktor Murakhovsky, a member of the advisory council of the Military Industrial Commission, to Gazeta.ru.

The military expert stressed that it makes no sense to deploy more than one division of this system in Syria, since it will block all Syrian provinces bordering Turkey: Latakia, Idlib and Aleppo.

In addition, the expert noted the presence of missiles at the air defense system with a range of 300 km (depending on the type and height of the target). And this is quite enough to get 150 km inland Turkey. According to the expert, the Turkish side should not forget about placing C-400 on the basis of Hamim: this warning is “very serious”.

December 1 became aware of the US reaction to placing C-400 at Hamim.

The experts who spoke on CNN, whose opinion leads "InoTV", they suggest that from now on American planes will have to change routes and coordinate with the Russian side.

“A serious increase in tension,” the representative of the US armed forces described the tactical move of Russia.

Retired US Colonel Cedric Leight believes that the C-400 is one of the most efficient air defense systems in the world. From the position in Latakia, these complexes will be able to fire on aircraft located in the area of ​​the Air Force Base in Turkey, the official said.

The expert is convinced that the American military aircraft will have to change tactics and routes of convergence with the targets. In addition, they will have to coordinate with the Russian side to ensure that they are not knocked down by the C-400.

The US official also admits that, since the attack of the Turkish Air Force on the Russian Su-24, the Turkish side has apparently been trying to stay away from Russian aircraft.

A spokesman for the US State Department, E. Trudeau, said that if the goals of the United States and Moscow coincide, and if Russia is "committed to the fight against IG, then Washington will" engage in dialogue with Russia.

The correspondent of CNN believes that the appropriate dialogue between the two sides, perhaps, "is already underway." General Dunford, Chairman of the Joint Chiefs of Staff, concluded the first telephone conversation with his Russian counterpart.

In addition to the United States, the North Atlantic Treaty Organization also became interested in the C-400 system in Syria. It can be assumed that someone already sees how the “aggressive” Russians surround the peacefully sleeping NATO countries.

Placing the C-400 at Khmeimim airbase is a "part of the strategy" of Russia, according to which Moscow is deploying modern air defense systems near all NATO borders, said NATO Secretary General Jens Stoltenberg at a briefing in Brussels during a meeting with foreign ministers of the member countries.

"Over the last long period of time, we have seen that Russia is deploying modern weapons both in Syria and in the eastern part of the Mediterranean, as well as near the borders of NATO in other parts of Europe," Stoltenberg quotes. RBC.

“We see this in the north, in the Baltic Sea, in particular in Kaliningrad, as well as in the Black Sea and in the Crimea,” the Secretary General said. “And this is part of the strategy, according to which Russia seeks to establish a no-fly zone and close space.” And NATO responds to this: “For this reason, we are expanding the training of our forces. For this reason, we have increased our military presence in the eastern part of the alliance. And for this reason we are discussing here how to further adapt our forces and develop further deterrence of aggressive Russia. ”

And what about Turkey, near which the "aggressive Russia" was entrenched?

Her actions were predicted by the former Russian journalist Yevgeny Kiselev, who has been working in Ukraine in recent years. “Turkish troops can carry out a march on tanks to the base area of ​​the Russian S-400 air defense system and seize it, ”he said on the air of“ UkrLife ”. According to him, which leads "Free press", from Khmeimim airfield to the Turkish border "three hours by tank".

This “forecast” is answered by the chief editor of the magazine “National Defense” Igor Korotchenko.

“We came to Syria seriously and for a long time,” the expert told the Free Press. “Two of our bases will now be located there - naval and airborne. "Assumptions" of various political losers that Turkish tanks will invade Syria are absurd. "

According to Korotchenko, Russia in Syria is conducting an anti-terrorist operation, and, in addition to the leadership of Syria and Iran, has been indirectly supported by France, which has entered into an agreement on intelligence sharing with Moscow.

“Russia is acting completely legitimate and will stop supporting the Syrian army only after the most important areas of Syria are freed from jihadists,” the military expert concluded.

Facing the fact that C-400 complexes in Syria were deployed and activated, Washington quickly showed a tendency to negotiate with the Russians, rather than crawl. A different policy shouldn’t have been expected from a tired Barack Obama, who thinks more about the climate on the planet than about the “answer” to Moscow, and can’t wait for his successor to sit on the throne in the White House. Or shift.

As for Turkey, there is no “tank march to the base area”. 27 November стало известноthat after the incident with the Su-24, the Turks, in agreement with Russia, stopped even the flights of the Air Force over Syria. What kind of base “grabs” are here! Such tank trips will remain the fruit of some journalists' inflamed brains.

Observed and commented on Oleg Chuvakin
- especially for topwar.ru
Ctrl Enter
Noticed oshЫbku Highlight text and press. Ctrl + Enter
We are
Situational analysis of the death of the MH17 flight (Malaysian Boeing 777), made on the basis of engineering analysis from 15.08.2014Syria: Americans scare themselves, and Asma Asad buys chairs
Military Reviewin Yandex News
Military Reviewin Google News
56 comments
Information
Dear reader, to leave comments on the publication, you must sign in.