Part of 2. The mystery of the death of the youngest general

December 10 2015
14
And then there were liberation marches throughout the territory of the Soviet Union. The Chernyakhovsky army was actively involved in many significant events: the Kiev, Proskurov-Chernivtsi, Zhytomyr-Berdichev, Rivne-Lutsk operations, forced the Dnieper and the Desna. 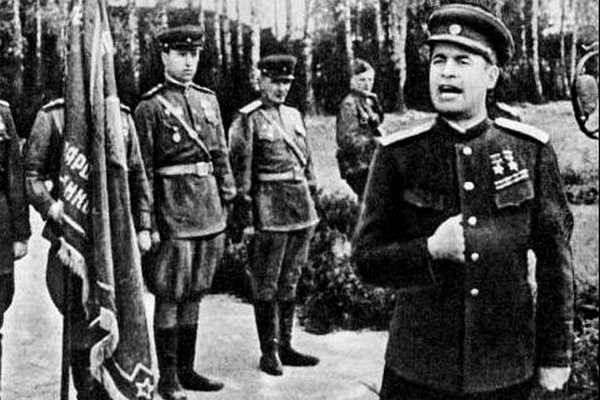 Ivan Danilovich was the youngest commander in the Soviet army for all history its existence. Shortly before his death, he could receive the title of Marshal of the Soviet Union. Marshal of the Soviet Union A. M. Vasilevsky, noting the rapid growth of Soviet military art during the war years, particularly noted Ivan Chernyakhovsky as one of the best examples of the growing up of young generals. According to historians, in the orders of the Commander-in-Chief, the name Chernyakhovsky was mentioned 34 times, which in itself is a record.

But it did not happen.

Official sources managed to find out that Chernyakhovsky died on the way to Victory. On the circumstances of his death tell a lot of generals and officers. In principle, the picture looms the same. But there is one small exception. The driver of Chernyakhovsky Nikolay in his description of the last day of the life of the general says that they changed places on the road: Chernyakhovsky sat down at the driver's seat and himself ruled the car. A shell fragment hit the driver’s seat and was, in fact, destined not for Chernyakhovsky, but for his driver. 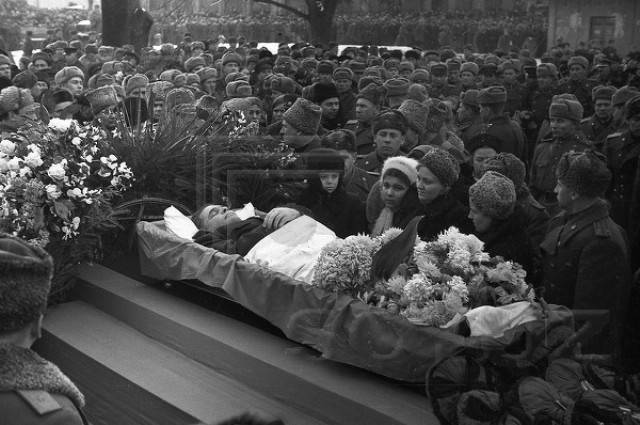 In April, 1945, a journalist for the newspaper Tow, wrote in his diary: “... Everybody loved him - and now this is a ridiculous death. Kilometers behind the 10-15 from the front line, where Ivan Danilovich Chernyakhovsky often visited, a random shell exploded. A large shard, passing between the two adjutants seated behind them, hit the general in the back. The injury was fatal. The funeral train from Insterburg (East Prussia) headed for Vilnius, which was recently liberated by the troops of the 3 Belorussian Front. Here, on the main street, in a small square, they buried Ivan Danilovich ... ”

But why did a lot of rumors arise around the death of a general? Perhaps, people could not reconcile with his early death and in every possible way searched for the reasons. But none of these discussed versions was blasphemous and ridiculous, as it happened in our days.

In post-perestroika times, publications began to appear, based on the most incredible circumstances of the death of a general. But we will not cite them: not one of the facts is based on official documents. For example, the famous journalist Viktor Baranets, in his article published in the newspaper Komsomolskaya Pravda, found a former driver tank T-34 (but he didn’t give his name), who claimed that the T-34 tank had hooked the general’s car on the road, a conflict ensued during which the thirty-four commander was killed, and the tank crew opened fire on the commander’s departing car. But in confirming his allegations, the journalist cites only one memory, not two at least, as is usually the case in witness testimonies. Maybe, for the sake of time, the journalist tried to distort the truth, who knows. Most of all, the journalist was not given rest by a “single” shot, which supposedly rang out from the side of the advancing Soviet troops. And so no one began to understand why this happened, and the NKVD officers were rampant. So the journalist finishes his publication. It never occurred to him that the allegedly shooting crew of the T-34 tank had been arrested and given under martial law to a tribunal that would have shown no condescension to the supposedly “killers of the general”. And it is unlikely that any of them would survive to this day.

The memory of General Chernyakhovsky is not left alone. I will give just two examples. Ivan Danilovich finished his last journey in Vilnius, where he was buried. But in the 1992 year, at the insistent demand of the Lithuanian authorities, the remains of Chernyakhovsky were decided to be transported and reburied in Moscow, at the Novodevichy cemetery.

But the memory of the general is still not left alone. The monument to General Chernyakhovsky, erected by the Polish authorities in 70-s, has been demolished today. This year, in September, the monument to the general, located in the town of Penenzhno, not far from those places in East Prussia, where 18 February 1945 died Chernyakhovsky, was dismantled. The main motive is Chernyakhovsky’s involvement in the arrest of Craiov’s army soldiers. With such a basic postulate, the Polish ambassador to the Russian Federation, Katarzyna Pelczyńska-Nalecz, spoke in her justifying speech, saying that "Chernyakhovsky certainly fought against fascism during the Second World War."

The Polish Ambassador to the Russian Federation deliberately kept silent about the fact that the Germans simply passed Poland during the war years and established numerous death camps there. However, as the fact of his birth, which would hardly have happened, if the Germans would continue to remain on the territory of Poland. And what would happen to Poland in general, do not defeat the Soviet troops of the German invaders ...

The Russian side responded strongly to these actions of Poland. And how else. Indeed, in this area, one after another, the monuments to the perished Soviet soldiers are being consistently demolished. Correspondents said that in different Polish cities there were already a dozen cases of vandalism in relation to the memory of the dead Soviet soldiers. Poland takes away from the face of the earth any mention of exploits, valor and honor, and in return tries to impose on its generation a new ideology of lies.

Heated by the authorities, the local so-called elite of scientists consistently collected the evidence base for Chernyakhovsky. On the atrocities of the Nazi invaders in this regard, Polish historians have chosen to keep silent. Although how can they be called scientists after such frauds!

For the first time, the dismantling of the monument to Chernyakhovsky in Poland was started in 2007, but the disputes around this “project” of the Polish authorities took a hard turn and the authorities decided to postpone this matter.

It depresses one. When the dismantling of the monument began today, not a single person stood up in defense of history, to which, in fact, every person born in Poland has an affiliation. After all, they owe their lives to their parents, who survived thanks to their freedom from fascism.

Indicative is another fact of political cynicism. The Polish authorities, at the request of the Russian veteran organization from the city of Kursk to transfer the dismantled monument to them, responded that the cost of all the work on dismantling the monument is 18 thousand dollars. If the veterans are ready to pay such a sum, the Polish side can return the monument. In the meantime, the remains of the monument was taken to the warehouse. The question of preserving the monument remains open.