Despite the resolutions adopted by the UN Security Council regarding the “Islamic State” banned in Russia and the war formally declared by Washington and its allies to a terrorist monster, the latter not only maintains control over significant territories of Syria and Iraq, but continues to expand into Libya, Yemen and other countries Near and Middle East.

IG managed to establish very close cooperation with the Taliban in Pakistan and Afghanistan, Boko Haram and Al-Shabab in Africa. The Islamists continue demonstrative mass executions of prisoners and hostages, they threaten with new terrorist acts all over the world, with invasion of the countries of Central Asia and the Caucasus. 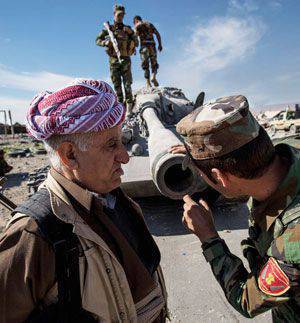 Not only people from Arab and Muslim countries, but tens of thousands of citizens of the United States, the EU, the CIS, and Russia are fighting in the ranks of the IG today. Unfortunately, a significant part of the Arab-Sunni population in the occupied territories of Syria and Iraq came under the influence of the radical Islamist ideology and supports the ISIS in the fight against the central governments of these countries. Foreign sponsors of the Islamists used the growing contradictions between the Sunnis and Shiites (Alawites) in Syria and Iraq and provoked clashes in Damascus and Baghdad.

IG opposition from the western coalition is minimal. According to the Pentagon, over the past year, the air forces of the international coalition under the auspices of the United States destroyed about six thousand militants of the IG by rocket-bombing and Kurdish militia forces, freeing only a few percent of the occupied territories. During the same period, tens of thousands of volunteers and mercenaries joined the ranks of the IG. The threat of taking Baghdad and other Iraqi cities remains. As most American military experts admit, the war against the IS gains a protracted nature and can be waged for many years.

A fundamental change in the situation was made by Russia, which, in cooperation with Iran, the troops of Assad and the Lebanese Hezbollah, in October 2015, launched a large-scale military operation against the Islamic State and other Islamists in Syria. The Russian Aerospace Forces have already destroyed hundreds of IG facilities - warehouses weapons and ammunition, command posts, headquarters, other elements of the military infrastructure, hundreds of terrorists were killed and wounded. Created real prerequisites for the liberation of the occupied territories.

The secret of vitality IS

The IG was created by radical Islamist groups of the Salafi-Wahhabi type with the support of the intelligence services of the Persian Gulf monarchies based on one of the Al-Qaida cells in the so-called Sunni triangle of Iraq as early as during the occupation of this country by the United States and its allies (approximately in 2006 year). The goals of the IS sponsors were to create a counterweight to the new Arab-Shiite authorities in Iraq and to hinder the possible strengthening of Iran’s position in this country and the region as a whole. It was significantly strengthened by the military-political associations of former Iraqi military personnel and representatives of other security forces, who fought against the occupying forces and the central government in Baghdad mainly by terrorist methods.

With the beginning of the civil war in Syria, the IG extended its activities to this country and first in alliance with other Islamist associations such as Jabhat al-Nusra, and then independently managed to control significant territory and important strategic facilities (sections of the state border, cities, oil fields, and . P.). The ranks of the IG joined the smaller Islamist groups of Syria and even units of the opposition Free Syrian Army. Washington and its Western partners for a long time tried not to notice the growth of the military potential of the IG in the hope of its active participation in the overthrow of the Assad regime.

In the summer of 2014, taking advantage of the uprising of the eight Sunni provinces of Iraq, the IS fighters, practically without fighting, marched victoriously through the north-west of the country, took the second most significant Iraqi city of Mosul and established control over a third of the country’s territory. Regular units of the Iraqi armed forces trained by American instructors could not provide any serious resistance to the militants and fled in panic, leaving them with the arsenals of the most modern heavy weapons. Already in July, 2014-IG announced the creation in the occupied territories of Syria and Iraq of a new Sunni state - the Islamic Caliphate with Iraqi Abu Bakr al-Baghdadi (pseudonym) at the head.

The leaders of the IG, based on the Shari'a as a set of laws, immediately began to form new authorities, power structures and other structures (education, health, life support). Financial investments of Wahhabi funds, trade in arms, oil and oil products, museum artifacts, hostages, extortion at the borders, bank robberies and other sources allowed the Islamists to form an annual budget of several tens of billions of US dollars and not only cover their direct expenses, but also start paying wages and pensions to civilians.

By the beginning of 2015, this group had become the vanguard of international terrorism and the striking force of radical Islam, and its leader may well claim to be the new Osama bin Laden. Common sense dictates that in the fight against this evil the community should unite efforts, but the reality is that it turned out to be again, as it was on the eve of World War II, politically and ideologically split. The United States declares that the main threat is not IS, but Russia and Ebola. Washington and its allies are fighting the IG in accordance with the policy of double standards. Terrorists are divided into good and bad, profitable or unnecessary.

Difficult situation in Iraq. The policy of the American occupying forces and the puppet government of Nuri al-Maliki, which was repressive against the Sunni Arabs for several years, led to the revolt of the Sunni provinces and their support of the IG. Heydar al-Abadi, who replaced Nuri al-Maliki as prime minister, has so far failed to restore the trust of his fellow Sunnis. And his panicked appeals for help to Washington and Tehran only heightened the hatred of the Sunnis to the central authorities. Rocket-bombing attacks by the coalition air force inflict insignificant damage to the IS personnel, but at the same time destroy the infrastructure and lead to civilian casualties. The number of opponents of Baghdad in Iraq is only multiplying.

So far, Washington’s desire to initiate a peacekeeping operation (humanitarian intervention) under the UN mandate with a wider involvement in the coalition against the IS of Russia, China, India and one of the key regional powers - Iran, is not visible. Difficult to fight double game monarchies of the Persian Gulf. Formally, they entered into a coalition and even signify their participation in the Air Force raids on Islamist positions, but non-governmental organizations and various Wahhabi funds continue to feed the IG, Jabhat al-Nusru with everything they need, recruiting new militants around the world.

Without debunking the radical Islam that has become an attractive ideology for many, stopping the influx of jihadists from all over the world, without depriving the IG of support from the local Sunni population, without blocking military, financial and any other outside help, it is unlikely that it will be possible to achieve a turning point in the fight against a terrorist monster the future.

According to official data of the FSB and the Ministry of Internal Affairs of Russia, today already about two thousand Russians and up to five thousand people from the CIS countries are in the ranks of the IG in Syria and Iraq. It is possible that some of them will return to their homeland for subversive and terrorist activities. The preventive arrests and detentions of dozens of recruiters and militants carried out by the Russian special services in October confirm these fears. As in many other countries of the world, in Russia there is a renaissance of Islam, which is accompanied by the spread of radical, extremist views. Some foreign centers are trying to use it to penetrate into Russia and the CIS countries, organizing subversive activities.

Successfully countering the threat of the spread of radical Islam and the international terrorism that it generates in Russia, the CIS countries, and the world as a whole can only be achieved through joint efforts. Much help in the fight against this evil can be provided by Muslim communities, which arguably, on the basis of the tenets of the Koran and other theological treatises, expose criminal Islamist groups that have nothing to do with the real values ​​and culture of one of the main world religions.

Ctrl Enter
Noticed oshЫbku Highlight text and press. Ctrl + Enter
We are
Terrorist monster does not give upA side child of capitalism. The phenomenon of "Boko Haram"
Military Reviewin Yandex News
Military Reviewin Google News
45 comments
Information
Dear reader, to leave comments on the publication, you must sign in.