December 2 2015
141
Once, at the dawn of perestroika, we enjoyed watching the programs of the ATP. The team assembled by Vlad Listyev was young, energetic, interesting. Watched all. Both young and not so.


In 90, there were generally people who were capable of anything. People who could make the feat. But immediately behind this feat is treachery. There was such a time. Everyone decided to the best of their understanding of what is good and what is bad. Some time was ground. Turned into dust. Some were sent into oblivion, political or informational. Some endured to the top. But there are those who have long been visible in the foam of this very time. Decades.

I will not talk about former idols today. Those who were always favored by the authorities and ate a tasty meal. Those who broadcast on TV, sang songs in the same place, received awards from the hands of the first persons. And when it came time to choose, they chose the other side.

In our youth, we are all radicals. This is normal. Moreover, it seems to me that radicalism must be at this age. Only young people can throw everything and "behind the fog and the smell of the taiga" rush into the unknown. Only young people can engage in apparent stupidity, which was recognized long ago by older generations. And, most importantly, the young ones prove that this is not nonsense. "All unnecessary for scrap - collect scrap metal!" This is the slogan of the young. Then they build, but aged. Sophisticated and rooted.

One of the "forever young", those who can not become an adult, in the Ukrainian media space was Matvey Ganapolsky. Once Russian, and now Ukrainian journalist and radio host. Despite his already solid retirement age, youth and radicalism are not released. Clutched in the brain of Matthew tightly. And then there's the Ukrainian events. Well, the Russian Ukrainian could not not stand in the pose of a fighter with Russia. Place of birth requires. Lviv. 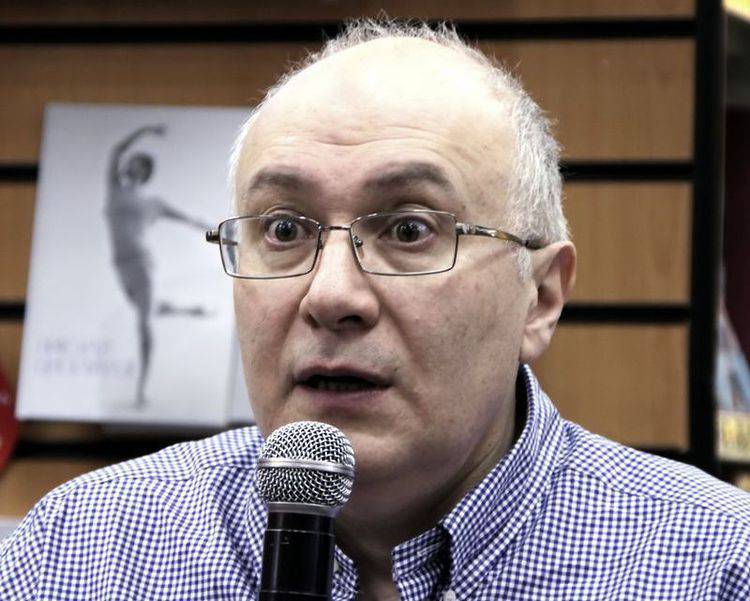 And Ganapolsky issued a terrible Ukrainian secret. No matter how much Russia builds bridges and doesn't lay cables to the Crimea, the ukropatriots will destroy all this. They will blow up, dig up, steal as a last resort. So the Crimea will never be completely Russian. Crimea will never live in peace.

“Ukrainian saboteurs are likely to try to destroy the Russian energy bridge to the Crimea. Well-known TV presenter Matvey Ganapolsky did not rule out this on the Ukrainian TV channel News 1. According to the journalist, whatever Russia built for the improvement of the Crimea, it will all be blown up or stolen, reports "Russia 24".

I had to talk to experts. It was with those who once thoroughly studied the possibility of the destruction of submarine cables or bridges. There are such experts. And the thought of a possible cable break in the head was still.

Let's start with the bridges. In principle, it is possible to blow up the bridge. But only when he will not be completely protected, or the guards will be gathered from the nearest psychiatric clinic. On the one hand, it seems to be a huge structure. And the more, the theoretically easier to destroy. And on the other?

To destroy the bridge span, it is necessary to lay a huge amount of explosives. And lay not anyhow where, but strictly in certain places. Experts know such places. And they know what needs to be done to prevent this from happening. Yes, and you need to deliver a mine on something. Just what will it give? Yes, almost nothing.

It is clear that the protection will be not only above-water, but also underwater. To do this, absolutely not worth keeping under water a bunch of divers. Technical tools fully cope with the task. And the boats of protection will prevent any attempts by scuba divers to get close to the supports.

And the most important thing. You have to be a true, mock ukrom to be sure that Russia, having built, will leave such an object unattended. No, so it would be a beauty, the ribbon was cut, and home. And then Ukrainian patriots are beginning to crawl out of the reeds like jabunyaks ...

No, have seen enough. So in Ukraine can be absolutely calm. We are not stingy with security, especially considering that this is Ukraine by the side.

Even more ridiculous is the thesis of cable break. Matvey, did you even see this cable? This is far from the electrical wiring that runs your home from the computer to the outlet. And the voltage there will be no 220 volts at all. So Ukrainian scissors will not help here. Well, they are not adapted for cables.

Even an explosion that saboteurs can organize will not work. And everything from simple, but very important details. The cable is specifically designed for this impact. That is, armored from the heart, for the most I can not. But this is not the most important thing.

The cable laying method looks even more fun. Straight balm for the soul of an underwater saboteur. Pan Ganapolsky somehow did not think about why a country like Russia could not independently lay a cable? Do we have such ships? Or designers can not come up with technology?

And you know, dear sir, we really do not have such ships. Well, Russia was not engaged in laying underwater cables. Not our topic. But China was engaged. And successful. And they laid these cables quite often and far enough.

Now I will reveal the secret for the Ukrainian patriots. The Chinese ship does not just throw the cable to the bottom of the Black Sea to the depths of 10 meters. It is also the bottom of the "plow". Exactly. Like a regular farm tractor in sowing. Only here he has a special plow. The bottom opens two and a half meters and already in this trench puts the cable.

And at the end of the process, this nasty ship also “flushes” the trench with bottom sediments. That's about. He dragged, buried and hid. At a depth not only underwater, but also under the pallet.

And now I will present as an amateur, of course, the actions of underwater saboteurs of Ukraine to destroy the cable. So, a group of specially trained patriots from Odessa or Mariupol moves forward underwater to the cable passage. Submarine mini-boats (well, someday there will be such in Ukraine) are loaded to the eyeballs with shovels and picks. On a leash, sea torpedoes are pulled to use them somehow, if the underwater fleet no.

And Russian frontier guards drink vodka at this time and play the balalaika. Sometimes throwing steam engines into the furnace (and what other engines can be on Russian ships after the shutdown of Motor Sich?) Stolen from Ukraine Donetsk anthracite.

And begin ukropatrioty tear cable. In the sense of digging. And then zrada from the Black Sea. The sand beneath again falls into this ditch. Well, not on the air work excavators. Patriot sand to the side, and the sea back into the ditch. So they fight with each other. The patriot has already grown gills. How else? In scuba air something cat wept.

And the Russian border guards continue to drink vodka and play balalaikas. And they were joined by employees of other special forces. Feast of the mountain stands.

In the end, the ukropatriots understand that fighting the sea is not worth it, but it is worth using the appearance of the gills. And they create a new state at the bottom of the Black Sea! Ukrainian Atlantis. Where there will be no public debt. There will not be, at first, of course, old-age pensioners. There will be no international laughter on the next decision of the Rada. And there will be universal grace.

Experts after reading this article smiled mischievously. Okay, they say, write. All the same, the rest can not be written. But in fact, that's right. In addition to balalaika and feast. Cannot be in service. A balalaika today in Russia can be counted on the fingers.

Ctrl Enter
Noticed oshЫbku Highlight text and press. Ctrl + Enter
We are
Results of the week. “When a lot of people look stupid, it starts to look normal.”Results of the week. "From eight in the morning to ten - a feat"
Military Reviewin Yandex News
Military Reviewin Google News
141 comment
Information
Dear reader, to leave comments on the publication, you must to register.