How did grant grandees decide to use truckers ’protest actions?

December 2 2015
229
From recent:
RBC: “Truckers came to protest in Novosibirsk with shorts in their hands.”


Novosibirsk news: "The truckers took off their last pants."

Urban Internet portal of Kirov:
"The Kirov truckers riot: the very first thing that will rise in price is food." 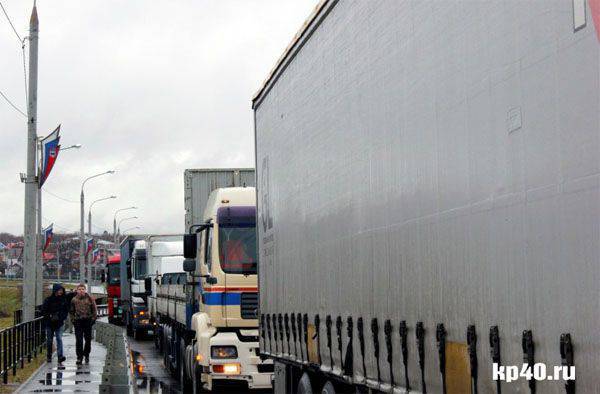 Rosbalt: "Truckers block routes in the south of St. Petersburg."

In general, the list of such publications can go on and on.

Reference Information:
The system “Plato” (abbreviation of the phrase “payment per ton”) is a system for collecting payments from trucks with an allowed maximum mass of more than 12 tons. It was announced that from November of the current year, 15 is implementing a similar system to compensate for the damage caused by the movement of multi-ton trucks on the roadway within the Russian Federation. Until February, the 2016 fee is paid at the rate of 1,53 RUB / km, then a two-fold increase in the fee is planned - up to 3,06 RUB / km.

The Platon system is implemented and controlled by RT-Invest Transport Systems, whose 25% shares are owned by Rostec State Corporation, and the share of private investors is 75%.

If the owner of the truck does not pay for the system “Plato”, then fines await him: 40 thousand rubles for individual entrepreneurs, 450 thousand rubles for legal entities. Earlier it was reported about the collection of fines and drivers, but the Ministry of Transport such statements, which appeared in the press, refuted.

It should be noted that the very idea of ​​introducing “pay per ton” appeared more than two years ago, when the government came to the conclusion that the number of trucks registered in the Russian Federation (at that time about 1,72 million) and transit freight vehicles (about half a million) weight over 12 tons leads to serious consequences for the transport infrastructure, and they (the consequences) are not covered by the collection of the transport tax for such vehicles. As a result, the experience of several European countries (for example, Germany) was taken and that Plato appeared, which excited both the owners of heavy trucks (business representatives) and ordinary truckers.

It is possible to understand both of them. Indeed, it is difficult for representatives of the “long-range” sphere to remain calm if the new system is capable of bringing additional costs to almost all types of entrepreneurship, somehow connected with the need for automobile freight. New costs can lead to the so-called “optimization” of both the budget of entrepreneurs and the income of drivers (significantly or not so significantly), and this in turn can lead to higher prices. That is why it is necessary to develop an optimal solution with the involvement of interested parties in the discussion. And this decision, in which, as they say, all the sisters are in earrings. Finding a compromise in this situation is extremely important.

However, in this situation, attention is drawn to the fact that due to the spin of truckers during protest actions, forces begin to appear that have nothing to do with the freight industry. But the absence of any relation to the system of “long-range” and entrepreneurial activity connected with it does not prevent these “mysterious” persons from expressing, perhaps, much more dissatisfaction with the notorious “Plato” than the discontent expressed by the truck drivers themselves. And we are talking not so much about the dissatisfaction of “mysterious people”, as about their obvious desire to rake up the heat with someone else’s hands - to provoke truck drivers to new, even more large-scale actions under the slogans like “Go to Moscow!” "Give 100 trucks under the walls of the Kremlin!" And all in the same spirit.

Evidence that the truckers ’protest action is being tried to use in their own interests people who really care about the fate of the truckers themselves and their employers from the Russian business environment are interesting photos. On the eve, such a collage of several photos appeared on the Internet, for example: 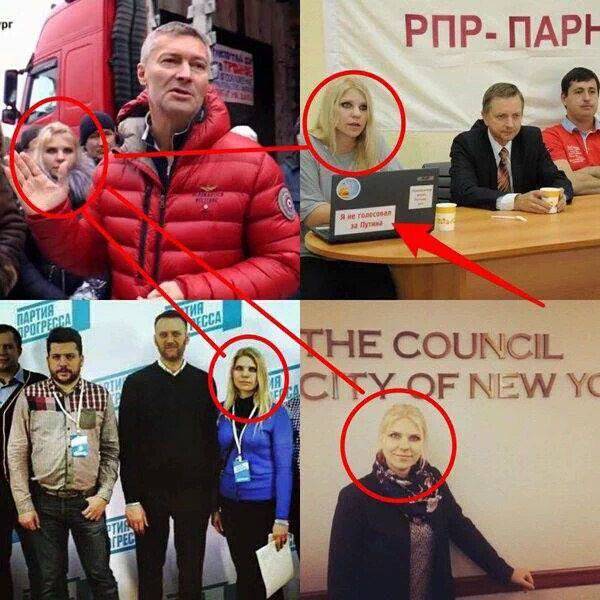 As can be seen, a blond girl appeared in the medium of truckers, who was previously noticed both at the meeting of the RPR-Parnas political council and at the “Progress Party” meeting chaired by Mr. Navalny, and even in the New York City Hall.

Lively interest in the problems of truckers showed, as it turns out, Mr. Navalny himself. Somewhere in the intervals between the urge for interest in the personality of the Prosecutor General of the Russian Federation and the statements of the President of Turkey, Mr. Navalny suddenly expressed concern about the situation with the introduction of a system of payment for the operation of the roadway by heavy loads. Yes, as expressed! Immediately with appeals almost to the barricades! .. The Moscow branch of the Progress Party decided to organize "mobile teams of legal assistance to truckers", as the party leader told everyone Mr. Navalny:

I also inform you that the Moscow branch of the Party of Progress yesterday decided to organize mobile legal aid teams for truckers on the 30 number. We will protect their rights in conflicts with "law enforcement agencies", if such are.

Moreover, the chief forest specialist in Russia decided to write an appeal to truckers and prepared a series of leaflets. And will there be any performances with an armored car? 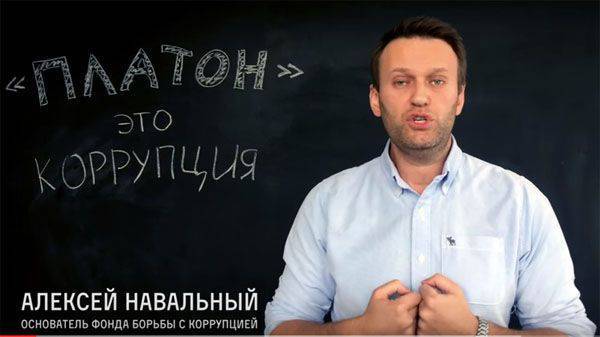 Naturally, the Dozhd TV channel and other representatives of the media with an original orientation were involved in forcing the situation. In their plots, in principle, no one specifically talks about what Plato is, and that such a system operates in a number of countries, including Austria, Belarus, Hungary and Germany (by the way, the same liberal "comrades" like to compare the roads of Germany with the roads of the Russian Federation ...), but in these plots there is one promise: everyone, you understand, rebel, no discussions and compromises - drive trucks to Moscow! ..

And this is Sergei Gulyaev, who declared himself coordinator of the protests of long-distance truckers in St. Petersburg, and his appeal to the "coordinated".

And who is friends with Mr. Gulyaev? Well, for example ... 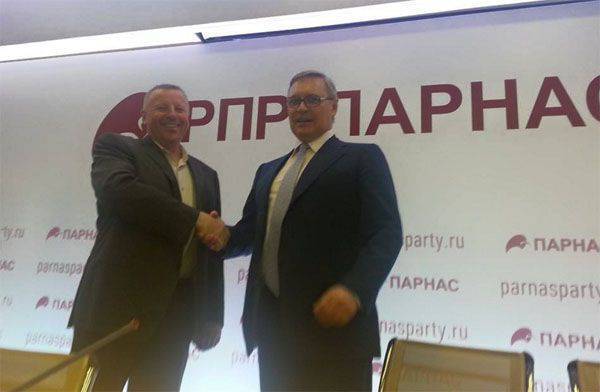 As you can see, Gulyaev feels great in the company of a man who brings proposals for sanctions lists in relation to the Russian Federation overseas ...

In many ways, personally to me (the author of the material), this resembles the situation with the problems of the presence of nickel deposits in the area of ​​the Khopersky Reserve. One of the companies expressed a desire to lead the development of the field, which was discovered during Soviet times. Then the mind had enough reserve zone not to destroy. In our time, the question has become acute. In the Volgograd and Voronezh regions, genuinely popular protests began against the very possibility of mining nickel on Voronezh chernozems feeding millions of Russians (and not only Russians) with bread. But the moment came when popular protests suddenly attempted to “saddle” all those workers from the camp of all kinds of Parnassians and Pegasuses. In the cities, under the guise of “We Are Against Nickel”, meetings of Yabloko and Progressors began to gather. Under this shop, even the followers of Mr. Mavrodi decided to get close again “closer to the people”, and their flags began to appear in the crowd of protesters.

In general, what it is all about ... Besides, in this situation, people who are really interested in settling the situation with the introduction of a payment for heavy loads and in search of a compromise in general should think carefully and still learn how to separate flies from cutlets. If the forces that feed on NCOs with other agents or act as grant eaters and perceive the same truckers only as a tool, are going to stick to the protests, then you need to understand who benefits from it, and draw appropriate conclusions on this basis ...