December 3 2015
70
The Chinese philosopher Lao-Tse said more than once that ... the most direct and obvious ways actually "lead not to the right place." That is, the obvious impact on society too is not the best, so one should not prohibit, he said, but ensure that people themselves realize that “a noble husband does not do this.” Why such a preface? But to what: we have many problems with different countries and they are solved in different ways, but there are many ways to solve and some of them are not so obvious, although they can be very effective.


And now the story goes about how in the fall of 1979, I, a school teacher in one remote from the regional center Zaplutalovka, which lay at the distance of 14 km from the highway, had to be on it to go through our Russian black soil, to the “native village”, where my wife and little daughter were waiting for me. On the back is a backpack, in the hands of a bag with provisions - because in the village, then, without farming, it was hungry, but where did the teachers who came from the city get from, the economy? 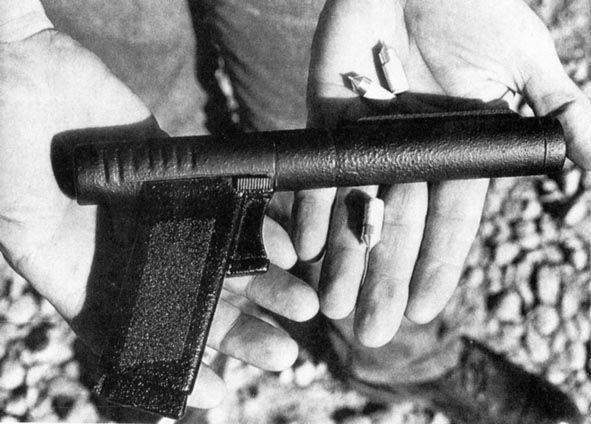 I usually walked, kneaded the dirt with my feet and ... cursed, since no one heard me. And then I thought that it would be necessary to spend this time with benefit! History I was already interested in weapons and weapons myself and decided that I needed to come up with ... a fundamentally new pistol, based on what I know about pistols in general. At that time, I knew that a pistol from a military weapon had long ago turned into a status weapon, that those who have it very rarely have to use it and the “case” is usually solved with two or three first shots, and no one and does not lead. In any case, I read about it in the journal Foreign Military Review, and this idea sunk into my head.

And if so, I thought then, then drag on the side of a whole kilogram of milled high-quality steel is completely useless. That to demonstrate the status, a plastic pistol without a bolt and all other parts will fit, but only a solid "monoblock" of plastic, having the shape of a pistol (and beautiful and ergonomic!) In which the bullets and propelling charges should be directly in the barrels, maybe seven, and maybe nine. Moreover, the trunks connected in one unit, would simultaneously be a one-time shop with electric ignition of charges. Shoot them all - threw it away! Shot a part - passed in the training unit, dostrelyvat! Well, the shooting mechanism is the simplest, galetny type with battery power in the handle.

I prepared the outline and description of the pistols and (I remind you that it was the autumn of 1979 of the year!) I sent the defense minister to Ustinov, normal, at that time. Already in spring in March came the answer from the head of a certain military unit number ... (Research Institute of the USSR) where it was written that “your proposal“ pistol ”was considered, but the proposed construction is no better than the Makarov pistol, there is an analogue - a“ four-barreled international ”pistol and it is possible that the barrels adjacent to the GOST used from the polypropylene you declare are softened ... with intensive shooting. Then my technical knowledge was only enough to admire - it’s necessary to have an analogue of “four-barreled international (and I haven’t heard of that!). Well, now I could say that “comrade experts” “melted finely”, because the same question was asked to the Australian designer O'Duaeru, who proposed his bullet pistol a little later, and also from plastic. So he calculated that when firing from several trunks, even the most intense, it is simply impossible to raise the temperature to critical values! 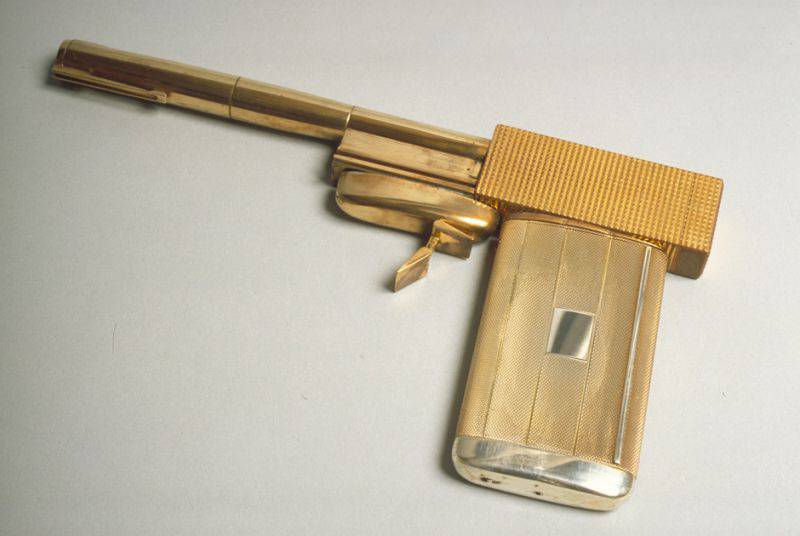 The famous golden pistol Francisco Scaramanga was made of pens and lighters.

13 years have passed, everything has changed, and in 1993, I transferred my project to the commercial venture firm Zeyf, which sent it for examination to Tula. The local specialists made a remark that the hole of the barrel for the block of barrel chambers is too large and dirt can get there! How? After all, the unit is worn attached to the gun, and during the replacement you can already make sure that the dirt does not fall, is not it? But ... "experts are specialists." After such a response, “Zeif” considered that the risk exceeded 50% and did not bother with this development. More years passed, the design of the weapon became more and more improved, now it’s a shooting computer made in ZD technology. After all, modern technology makes it possible for the gun itself, and the blocks of barrels for it to do just that. Moreover, such a gun can be noiseless, have a bullet of a smaller caliber than the barrel, which would block the exit from it to the gases. A bullet of greater length (see fig.) Is a bullet-arrow and in front of you is a block of trunks for firing under water. A gun in both cases one, which is very, very convenient. It is inconvenient to seal it so that “where it is not necessary” does not get water, but in principle this can be done. There are already plastic blocks with electric ignition in security systems, so eventually, probably, a whole plastic gun will appear. 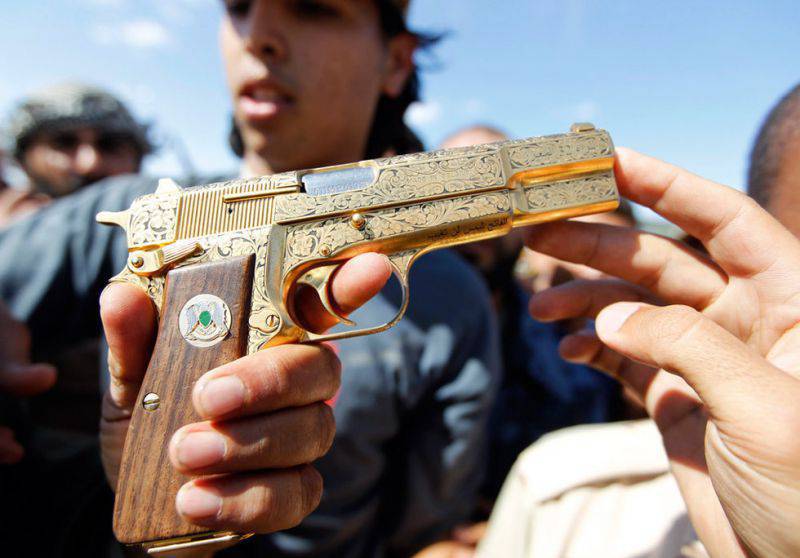 The golden gun of President Lukashenko’s son. They say that he does not part with him. That little child will grow ...

At about the same time I read about the design of a ceramic gun that detectors do not see at airports. Make it difficult, but the goal is worth it. "And what if you make a gun out of paper?" - I thought, and ... did. And not only did, but also tested, then I published the magazine “Tankomaster” and in one of the numbers I described in the article “shooting model for diorama photography”, that is, with smoke, fire, which was very popular at that time. So, there this shooting device in a simplified version was just described: a tube, a flashlight bulb in it with a crushed glass, two wiring, a battery, a button and that's it! I glued the tube out of the ordinary drawing paper, the plug too. Of course, this is not all know-how, but in principle, everything is so! The test bullet was ... bone from a beef mosle, taken out of borsch and ground on a lathe. Behind her, there were four “wings” of razor blades. I also read that the standard NATO target looks like a bar of plasticine 30 cm thick. I had to buy several boxes, mix them all in one color and cut a block of the right length. Then I loaded my pipe, squeezed it in a vice on the edge of the table, installed a clay block at the opposite end of the room and ... pressed a button. Babakhnulu so that I almost deaf, and the tube of paper is not torn! The bullet didn’t break through the block from a distance of five meters, but I had to search for it for a very long time, so my path inside the clay turned out to be so tortuous. So, God forbid, she would get into something else ... 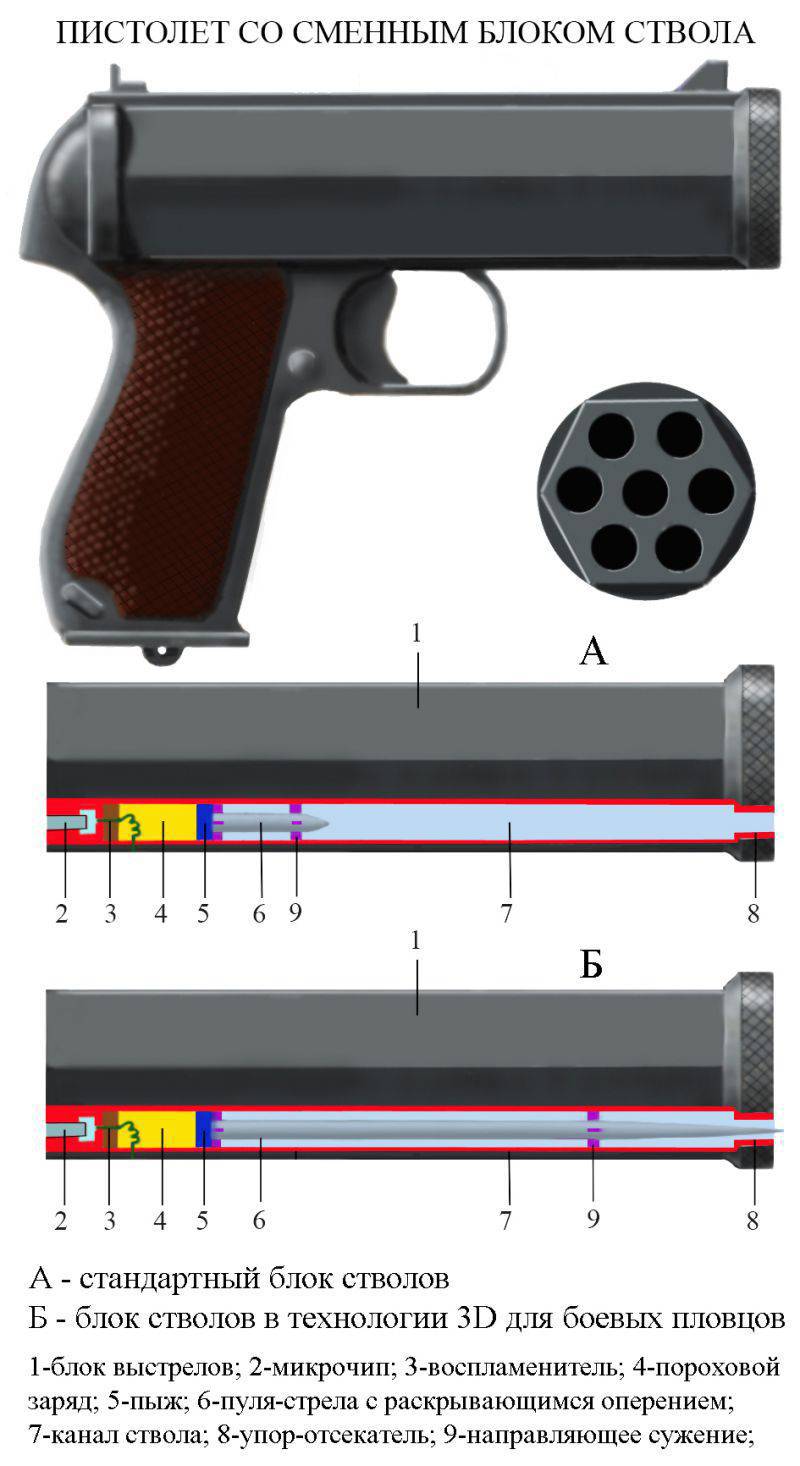 Well, now let's see what this construction opens up prospects today. Suppose that our scout (spies, because they are only “there”), goes “there” with a mission. It is clear that he does not have a weapon and it is generally difficult even to imagine a more law-abiding citizen. But suddenly he receives an order to urgently eliminate the just-appeared inventor of the hyper-atomic bomb, or his goal, and at all, “Dr. Evil.” Question: where will he take the weapon? Of course, such situations for our residents are certainly provided for. There are people who will deliver everything to them, but ... “you want to do something well, do it yourself!” Anyone who is dedicated to your secret can easily sell you!

And here you have with you a set of "young technician": step-by-step instructions, paper, glue, the simplest shooting mechanism, the shape of the viksinta for casting bullets from lead ... In a word, a complete set for making a "paper gun". More than four trunks he did not need. And all non-working voids in it are filled with a mixture of potash nitrate with sugar. The igniter is a match head, covered with a piece of scotch. Made, painted in pink with flowers, charged and ... bang-bang ... "Dr. Evil" killed! Then he walked away, brought the lighter to the igniter, and now a handful of ashes remained from the pistol, which cannot be evidence! There are no traces of the passage of the bore on the pool, there are no fingerprints on the weapon, and there is no weapon itself - that's all! Task completed!