December 2 2015
13
To date, a large number of different robotic complexes have been created in our country, which are used by the armed forces and security forces for solving various tasks. Scientists and designers of such technology do not stop at what has been accomplished and continue to work in a promising direction. A few days ago, information appeared about some of the current plans of the United Instrument Making Corporation, which is responsible for the creation of new robotic systems.


On November 30, Rostec Corporation published data on new work in the field of robotics, and also cited some statements by Alexander Kalinin, Director of the Innovation Development Department of United Instrument Engineering Corporation. It is reported that at the present time, specialists of the defense industry are working on the creation of new technologies, which in the future will become the basis for promising projects of robotic complexes. It is planned to develop a number of new systems that will significantly increase the effectiveness of robots, as well as expand their capabilities in solving various tasks.

It is argued that thanks to new technologies, promising robots will have almost human capabilities. They will be able to independently navigate the terrain, build a route, observe and detect targets, and also solve some other tasks. All this will increase their real effectiveness on the battlefield, as well as reduce the likelihood of detection due to a sharp reduction in the number of any radiation capable of unmasking equipment. 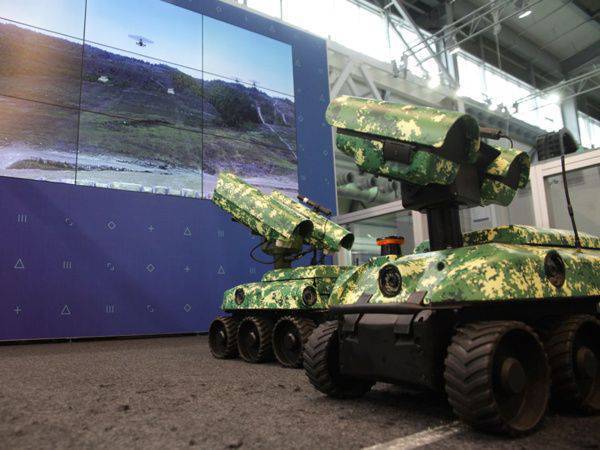 Prospective robotic complexes will relate to the so-called. third generation. According to A. Kalinin, the principal difference between third-generation robots and older systems is the ability to independently perform the assigned tasks without human intervention. At present, several domestic enterprises that are part of or related to the defense industry are engaged in this area. There is already some success in the research of artificial intelligence, machine learning, technical “vision” and intelligent automated control systems.

Russian specialists have already been able to “teach” experimental robotics to interact with each other, including through the joint solution of certain problems. Such technologies are tested on various non-military platforms, such as quadrocopter drones or quad bikes. According to A. Kalinin, in the future such technologies can also be used to control other vehicles or combat vehicles. Such control systems can be installed both on a passenger car and on a tank.

Now available technologies allow robotic systems to work without operator participation and in an automated mode to solve a certain range of tasks. So, receiving data from the air surveillance, the land robot can independently build its route, taking into account the situation. It is possible to self-identify obstacles and ambush detection. In addition, such systems do not depend on satellite navigation systems: if the satellite signal is lost, the robot will use its own sensor systems. Technologies are also being developed that will allow the technology to build a three-dimensional map of the area.

A. Kalinin notes that in the future, robotic systems based on similar technologies can be used in various fields. Robots will be able to conduct reconnaissance and surveillance, as well as patrol open and closed areas. It will be possible to collect various information, including the creation of maps of the area. The solution of transport problems is not excluded. If necessary, promising equipment will be able to obtain the necessary weapons or special equipment for military purposes. For example, a robotic platform can carry electronic warfare or other similar equipment.

An important feature of the third generation of robotic systems will be to reduce their own radiation. Due to independent work without constant communication with the operator via radio, it will be possible to significantly reduce the radiation level of the robot. In this way it is planned to reduce the likelihood of its detection by means of electronic reconnaissance. As a result, the robot will not be so noticeable on the battlefield, which will also affect its combat survivability.

Not so long ago, the United Instrument-Making Corporation completed work on the Unicum project, which is the first significant step in a promising direction. In mid-October, the UIC reported that the Unicum system successfully passed the tests, was recognized as ready and accepted by the customer. The automated control system "Unicum", allegedly, will significantly improve the performance of robotic systems by reducing the role of the operator when performing certain tasks.

According to reports, the Unicum system is capable of automatically controlling 10 robotic complexes at the same time. The control system is responsible for the coordinated work of robots on the battlefield and independently resolves some issues. Thus, it is able to assign roles within the group, as well as to manage it, taking into account the particular circumstances of the situation. Also, automation is able to independently send robots to the most advantageous positions and search for a target. At the same time, the operator is responsible for the attack of the detected targets, and the console displays all the necessary information.

The Unicum system can be used in various fields. Its capabilities are of great interest to the armed forces, law enforcement agencies and other potential customers. It can be used both for combat missions and for maintaining law and order or for other non-military purposes. For example, there is the possibility of using "Unicum" during public events or during search and rescue operations.

In the spring of this year, the launch of the development of the URP-01G tracked robotic platform was announced, which could become the basis for specialized equipment for various purposes. On this machine it will be possible to mount various combat modules with the necessary weapons, as well as other special equipment. According to the developer’s plans, the URP-01G platform will be able to carry up to two tons of payload. In the future, it is planned to equip this complex with automated controls built on the basis of the latest technologies. This will reduce the role of the operator in performing certain tasks, and in some cases even eliminate his participation.

In recent years, Russian experts have created a fairly large number of robotic complexes for various purposes. Some equipment of this class has already reached mass production and is used in the army or security forces. After completing some projects, the United Instrument Making Corporation starts others. As follows from recent reports, the most relevant at the present time is the subject of autonomous robotic systems capable of performing all tasks without human intervention. Some studies in this area have already been done, and the first practical results in the form of ready-made systems should appear in the next few years.

Ctrl Enter
Noticed oshЫbku Highlight text and press. Ctrl + Enter
We are
Rostec presented the first Russian drone at the Innoprom exhibitionRussian Arms Expo-2013: exhibits and statements
13 comments
Information
Dear reader, to leave comments on the publication, you must to register.