Soros Tchk, or On the outgoing trajectory

This “stop list” was approved by the Resolution of the Council of Federation of the Federal Assembly of the Russian Federation 8 in July of the current year. He draws attention to the activities of the Open Society Institute (Soros Foundation).

Information about the decision was sent to the Ministry of Justice of Russia for the inclusion of these organizations in the list of foreign and international non-governmental organizations whose activities were considered undesirable in the territory of the Russian Federation. 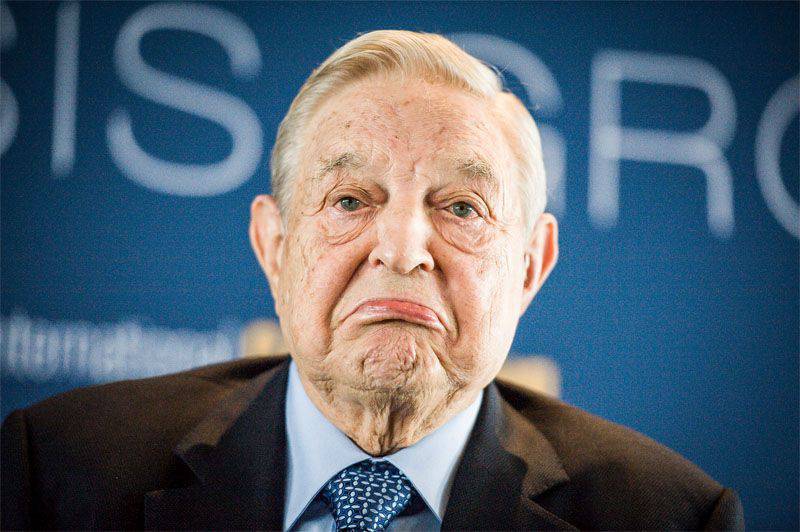 Of particular interest is not so much the decision of the Prosecutor General of the Russian Federation, as the reaction to this decision from the so-called ultra-liberal public. The ultra-liberal mass, as if by a wave of a magic wand, began to publish materials about how much Mr. Soros since the opening of funds in the territory of the Russian Federation “benefited” scientists, teachers and students with grants, how many universities received generous funding in 90, and in general - how many at his expense was "vyhozheno homeless puppies and kittens" ... Notes appeared on the Web that, if it were not for Soros, in Russia there would not have been dozens of so-called Internet centers, public organizations, youth projects . In general, everything turned into something like “Hands off Soros and his boundless love for Russia!”

And Soros’s love for Russia is truly “unlimited”, and the statements about it from the liberal panopticon are quite understandable ... The fact is that the very ultra-liberal environment for which the concepts of receiving Grant and bad-mouthing Russia have actually flowed from one another, synonymous. At the same time, Soros tried to invest in Russia (and now does approximately the same thing in other countries, including Ukraine) in projects that promised quick enrichment with minimal investment. Soros is always where something bad lies; always where social tensions and the actual lack of a coherent structure of power; always where there is talk of total privatization involving fraudsters of all stripes, always where you can earn on human errors in terms of the consumer society as the highest socio-economic value.

By the way, not all Russian grant-eaters nurtured by Mr. Soros recall that the Soros funds officially stopped their work even 12 years ago - in the 2003 year. In order not to exaggerate the activities aimed at promoting their own interests, in the Russian Federation continued the work of the "daughter" of the Soros Foundation. The activities of the “daughters” were carried out according to the same rules: to create an environment of tension, to look for a reason for liberalization in all areas of activity at any cost, so that the owner had the opportunity to pump profits or at least receive the “fashioned” properly supporters of his ideas.

This activity of Soros organizations, hiding behind the burqa of charity and altruism, was called threatening to the foundations of the constitutional system of Russia in the Prosecutor General’s Office of the Russian Federation. It was difficult to expect that Mr. Soros himself would take it calmly. 85-year-old George Schwartz (namely, the real name of the “combinator” sounds like this) through his Russian grant-eaters announced that he was “alarmed” by the decision of the Prosecutor General’s Office of Russia, and that he didn’t think about the constitutional system of the Russian Federation ...

Of course, I did not think ... Of course, Mr. Soros at all times treated Russia with “trepidation and reverence, for some reason, filling it with the tools to achieve his financial and lobbying goals. Of course, Mr. Soros thought exclusively about the people and the Russian Constitution in August 1998, when a few days before the default was declared in Russia, he made a statement that the IMF should no longer make any concessions regarding Moscow, and that in Russia, you must immediately take the path of large-scale devaluation. After the default of August 1998, how many new millions of people were earned in the impoverishment of the people by the caring "friend" George Soros, he does not tell us.

But he reports how he invested in the publication of new Russian textbooks. Those people, who themselves or their children studied in 90-e-2000-x from textbooks published at the expense of Soros, perfectly remember that this literature simply flooded schools and libraries. The focus of this literature (especially textbooks stories) well known. Well, if someone forgot ... these are the very publications in which the subject of the Great Patriotic War was given less attention than the subject, for example, "Stalin's bloody repression" and stories about the "Soviet machine of oppression of Eastern European states."

In fact, the Soros offices killed several birds with one stone: they forged the image of "patrons"; enriched themselves, enriching the old George, sowed a new field with the seeds of Russophobia and frank rejection of the national system of values.

In 2014, Soros actively supported Maidan, engaging in the process of attracting European Union billions to Ukraine, in order to be able to take bingo again. On the account of Soros and the constant statements that Ukraine should be delivered by the West lethal weapon. Such words say that Mr. Soros is one of those who, in controlled chaos, feels like a fish in water, trying to spread this chaos under the guise of humanistic ideas.

In this regard, only one thing is surprising - that the activities of the Soros structures were recognized as undesirable in Russia just now.

If the decision of the Prosecutor General’s Office of the Russian Federation is not to the Soros’s foundations, then let them fill a vacant niche, for example, in the USA, where one of the headquarters of the Open Society Institute is located. You can, for example, engage in the publication of textbooks on the history of the colonization of America for the indigenous population of the country ... Or donate grants to American students who will study history using textbooks published in modern publishing houses of the Russian Federation ...

And by and large old George to his age is harmful to think exclusively about filling his pockets and bleeding people. At that age, it would be worth thinking about something else ...

Ctrl Enter
Noticed oshЫbku Highlight text and press. Ctrl + Enter
We are
George Soros and his position in the context of the Ukrainian crisisGeorge Soros on Ukraine and Russia: the West made a number of strategic miscalculations
Military Reviewin Yandex News
Military Reviewin Google News
50 comments
Information
Dear reader, to leave comments on the publication, you must to register.