Davutoglu advised Russia to be cool

December 2 2015
151
Turkish Prime Minister Ahmet Davutoglu explained directly what he expects from Russia, and also made it clear that the Russians should be cool. Speaking about the special economic measures of the Russian Federation undertaken in relation to the Republic of Turkey, he noted that not only Turkey has interests in Russia, but Moscow is also economically dependent on Ankara. 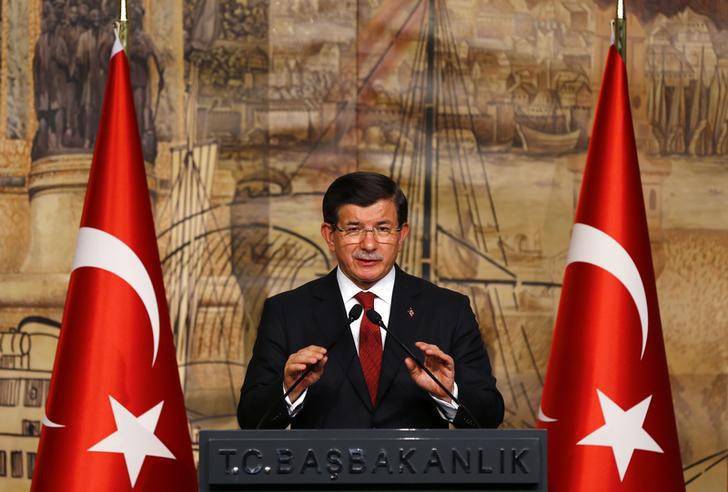 28 November, Vladimir Putin signed a decree on the use of special economic measures against Turkey. The president introduced banning or restricting Turkish organizations to work in Russia, importing certain types of goods from Turkey and decided to suspend visa-free agreements between the two countries (from January 1, 2016).

“To establish that tour operators and travel agents should refrain from selling to the citizens of the Russian Federation a tourist product involving visiting the territory of the Republic of Turkey,” the decree says.

In addition, the government is instructed to “take measures to impose a ban on charter flights between the Russian Federation and the Republic of Turkey”.

Recall that Turkish President R. T. Erdogan did not make a formal apology to Russia for the Su-24 plane shot down by the Turkish Air Force on the Syrian border. Last Saturday, only the expression “disappointment” from this incident was heard from his mouth, the newspaper "Sight".

Another representative of the highest authorities of Turkey, Prime Minister Ahmet Davutoglu, seemed to have taken to compete with the president in the rigidity and categoricalness of the statements.

After meeting with NATO Secretary General Jens Stoltenberg, held on November 30 in Brussels, the Turkish Prime Minister said that before the incident with the Su-24 Russia had been informed three times about the principles of the protection of Turkish airspace. Then Davutoglu directly said that the violation of the air borders of Turkey are violations of the borders of NATO.

Turkey will not apologize to anyone for defending its borders, Ahmet Davutoglu said.

“Protection of national borders is not only the right of Turkey, but also the responsibility of its government, of which I am the head. This is one of the main tasks of the government. Therefore, no one has the right to expect an apology from us for defending our airspace, ”the premier said.

As for Russia's economic reaction (in the form of sanctions) to an incident in the sky, the Turkish prime minister explained everything the day before: he made it clear that the Russians were behaving incorrectly.

At the same time, Davutoglu noted that his priority task is to reduce tensions between states and prevent repeated incidents.

According to the Turkish Prime Minister, the priority for Ankara is to maintain open communications with Russia and coordinate activities in Syria. In his opinion, the crash with the aircraft showed that "the air operations of two separate coalitions in the same space can always lead to similar incidents."

Thus, let us add on our own, Ankara made it clear to Moscow that “repeated incidents” are quite possible if the Russians continue to persist and beat the militants with a “separate coalition”. Here the American line is easily visible: there can be only one coalition, and only the United States can lead it. Turkey is a member of NATO and has its own interests in the region, and Russia will have to reckon with them.

It is obvious that Davutoglu and Erdogan behave defiantly precisely because they feel behind their backs the power of NATO and the overseas hegemon, whose political interests in the Middle East largely coincide with the Turkish strategy. Ankara wants to overthrow B. Assad in Syria. Back in 2013, the warlike Erdogan called out the legitimate president of Syria is a “butcher” and a “murderer,” so the Turkish perseverance and belligerence should not be surprised.

The White House has forgotten about its recent statements - that Assad should remain in power for some time, and then there will be elections and the “transitional political process” will begin. Today, Obama, known for his selective memory and commitment to double standards, is again in favor of Assad’s departure.

November 30 Barack Obama met with Vladimir Putin in Paris, on the margins of a conference on climate change. A White House spokesman told Reuters that President Obama, in a conversation with Putin, insisted on leaving Bashar Assad from his post.

So, the motto of Hillary Clinton "Assad must go" again in action. This predictable turn in foreign American policy undoubtedly inspired both militant Erdogan and his political partner Davutoglu. Pointing to NATO and explaining to the Russians everything about the Turkish border, the latter also criticized the economic measures taken by President Putin against the Republic of Turkey. Neither Erdogan nor Davutoglu seems to be willing to understand that the friendship with Russia to Turkey would be beneficial in every sense, but the “partnership” with IG, whose fighters quietly walk back and forth across the said Turkish border and haggle over the cheap smuggled oil will not bring Ankara to anything good.

Radical Islamism, today at war with Assad, tomorrow will turn against Erdogan and his minions. In the United States, Islamists, too, will not forget to strike. Historical examples are available. Nevertheless, Turks and Americans continue to divide the terrorists into good and bad - and even do oil business with some of them.

A few words in conclusion.

On November 30, deputies of the Turkish parliament passed a vote of confidence in the new government of the republic. On the vote in the Majlis in support of the Cabinet, formed by Prime Minister Ahmet Davutoglu, 315 from the 550 deputies spoke, reports TASS.

The agency reminds that following the results of the parliamentary elections held a month ago, the Justice and Development Party (its chairman - A. Davutoglu) regained its ruling status and the right to independently form a cabinet. According to the constitution, the new government will work for four years.

Thus, parliamentarians, though not by an overwhelming majority, expressed approval of the aggressive line that Davutoglu and Erdogan pursue in their foreign policy.

Observed and commented on Oleg Chuvakin
- especially for topwar.ru
Ctrl Enter
Noticed oshЫbku Highlight text and press. Ctrl + Enter
We are
Turkey and Greece. Cold War airspaceSituational analysis of the death of the MH17 flight (Malaysian Boeing 777), made on the basis of engineering analysis from 15.08.2014
Military Reviewin Yandex News
Military Reviewin Google News
151 comment
Information
Dear reader, to leave comments on the publication, you must to register.