December 1 2015
77
November 30 Barack Obama met with Vladimir Putin in Paris. The meeting took place on the margins of the conference on climate change issues on the planet. The American president regretted the incident with the Russian Su-24, shot down by the Turkish Air Force. The conversation of the two presidents lasted about half an hour. 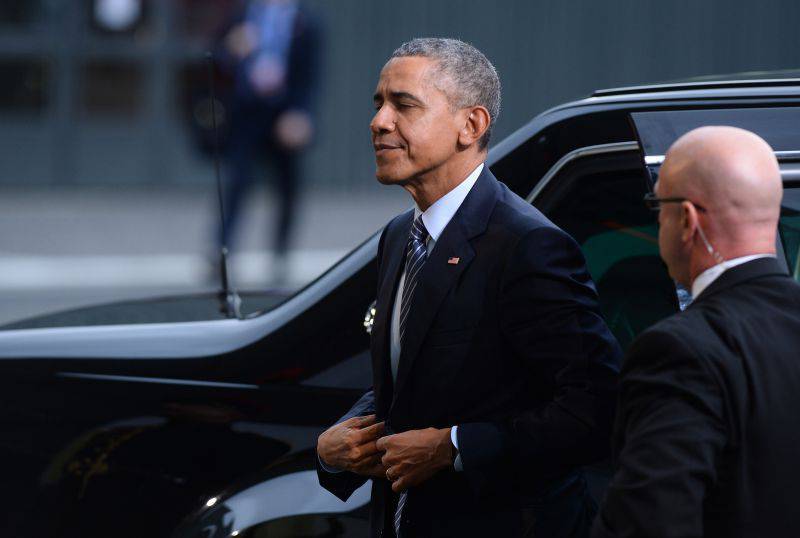 The prince of this world

A White House spokesman said, according to Reuters, that the leaders of the United States and the Russian Federation discussed the situation in Ukraine and the Syrian crisis. According to the official, President Obama insisted on leaving Bashar al-Assad from his post. This withdrawal would be part of a political transition process. In addition, notes "Lenta.ru", B.H. Obama pointed out the importance of resolving the conflict in Ukraine through diplomatic channels. He further stressed that sanctions against Moscow could be lifted if Russia fulfills the Minsk agreements.

At a meeting with V. Putin, the American president expressed regret over the incident with the Russian Su-24, reports TASS. This was reported to journalists by the press secretary of the Russian president, Dmitry Peskov.

"Obama expressed regret over the incident with the Russian plane, which was shot down by the Turkish Air Force in Syria," the agency Peskov said.

Peskov clarified that Putin’s separate meeting with Obama was agreed on the morning of November 30. She took about half an hour. According to the press secretary, it "was quite intense."

The American president, reports TASS, also noted the importance of applying air strikes against the militants of the "Islamic state" in Syria, and not against the rebels fighting against B. Assad.

The activity of communication between the presidents of the Russian Federation and the United States has increased significantly in a fortnight. November 15 in Antalya (Turkey) Obama and Putin held an 20-minute conversation on the margins of the G20 summit. The conversation went on in private. The parties discussed the situation in Ukraine, the war in Syria and the fight against "IG". After the meeting in Antalya, presidential aide Yury Ushakov told reporters, it became clear that the leaders of Russia and the United States "still disagree on the tactics" of the fight against IG, they write "Vedomosti".

Judging by the current meeting (and despite Obama’s “regret”), we’ll add, Russia and the United States differ in the same way on the Syrian issue as before. It looks like the Turkish incident greatly influenced the decisions of the White House and State Department strategists. If recently Obama and Kerry were inclined to leave Assad in power for some time (the period was about six months), then after the Turkish strike on the Russian plane, the statements became tough again, in the style of Hillary Clinton: Assad should leave.

It is clear that in such conditions, the "partners", despite the terrorist attacks in Paris and the appeals of F. Hollande, will not create a broad coalition to fight the "IG". Climate issues occupy the head of the White House much more than the threat of international terrorism, which concerns Europe. The weaker the competitors and opponents of the United States, the better for the United States. Adhering to this strategy, the United States enriched in its time in the First and Second World Wars. Apparently, they expect to remove the cream from the new global war. With one well-known condition: a war should not cross over the ocean, to reach Washington.

At the moment, everything that infringes Russia and Syria in the Middle East, Obama and his generals will secretly approve. The next president will behave in the same way, even if it is D. Trump, who is not inclined to direct anti-Russian rhetoric. Neither economic nor political competition has been canceled by anyone in this cruel world, and billionaire Trump understands this perfectly well. The struggle for finance, influence, resources, including water, will only escalate.

In this context, the assumptions of those military experts and analysts who say that a strike on a Russian bomber that did not fly into Turkish airspace was foreseen and even coordinated with the White House and NATO are quite appropriate (Turkey is a member of the North Atlantic Alliance back). Without counting on propaganda support from Europe and the United States, R. T. Erdogan, covering up the smuggling business of his son Bilal, associated with the “oilmen” from IG, probably would not have dared to strike at the Russian military plane.

“Regret” by Barack Obama, who called on Assad’s departure on the fields of the climate conference (that is, besides, what Erdogan calls for), looks therefore fake and deceitful.

In fact, one should assume that Washington would not have objected if several more strategic enemy aircraft had dropped near the Syrian-Turkish border. The Americans themselves, recognizing the inefficiency and even the selectivity of their strikes, including the columns of IG trucks, feel uneasy when analysts oppose the success of Russians to their “successes”. In addition, Washington continues to divide terrorists into good and bad, calling some militants "IG", referring others to "rebels" fighting for "democracy" and against Assad. And if the Russians hit "good" goals, the Americans are indignant on a par with the Turks.

Recall that in Paris, the UN World Climate Conference. The forum is attended by heads and government representatives of nearly one hundred and forty countries. The goal of the climate summit is to adopt a new multilateral climate agreement. After 2020, it should replace the outdated Kyoto Protocol.