Peter Connolly on the Celts and their Arms (Part 3)

December 11 2015
25
Diodorus paid attention to the great length of Celtic swords, especially when compared with the considerably shorter Greek or Roman swords. At the same time, judging by their findings in 450 - 250. BC, the blades of Celtic swords reached about 60 cm, that is, no longer than those of the Etruscans and Romans at that time. Longer swords appeared only at the end of the 3rd century. BC, they used them until the 1st century. BC. 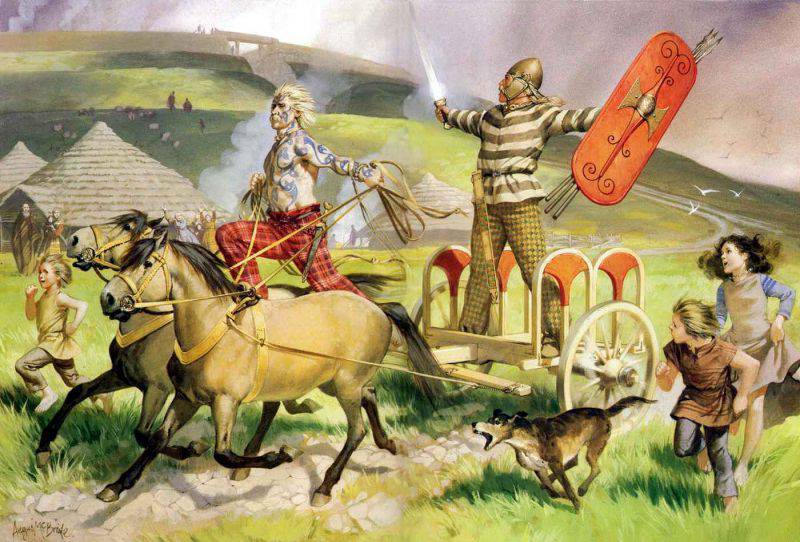 The Celts were big posers and boasters! Figure by Angus McBride.

Celtic swords are found by archaeologists in large quantities. They are considered in accordance with the adopted system of periodization of the Laten period and are accordingly typologized. Thus, the swords of the laten I phase belong to the period 450 - 250. BC. and they have a blade length from 55 to 65. See. Although there are single samples in 80, see. They are all double-edged, have a pronounced edge and belong to the piercing-cutting type. A characteristic feature of this type of swords is the specific shape of the tip of the scabbard, which has the shape of a stylized letter U. Daggers have blades of different shapes: from broad, almost triangular, to narrow, like a stylet; their length is 25 - 30 cm. 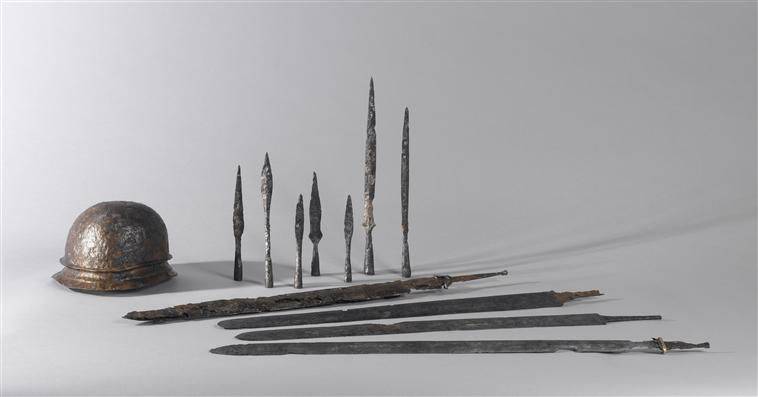 During the late II phase (ca. 250 - 120 BC), the blades of the swords stretched out. Now it was weapon just for the chopping blow. The tip of the blade acquired a rounded shape, the length began to reach 75 - 80 cm, and the weight of the 1 kg along with the handle. The tip of the scabbard has acquired a different shape. From the lake at the village of La Tennes in Switzerland, these swords get almost hundreds, and although some local differences can be noticed, it is clear that all of them belong to this period. Sheaths (usually from iron) were made of two bands. The front was a little wider than the back, and skirted around the edges. Their mouth was strengthened by a decorative overlay, and the tip strengthened their construction below.

The latex III phase (120 - 50 BC) is distinguished by the fact that the length of the blades increased even more and reached 90 in some swords. See Long swords with a rounded tip and iron sheath of this type are most often found in Britain. 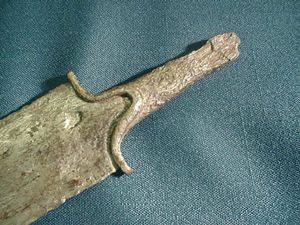 The shank of the Celtic iron sword.

It seemed that the Celtic triumph in Europe would have no end, but the conquest of Gaul by Julius Caesar in 55 BC put an end to him. In Britain, the Celtic subculture existed even 150 years. The blades of the swords of this time (phases of late IV) are shorter than those that were before - 55 - 75, see. The sheath received a forked tip in the form of a very flat inverted letter V. 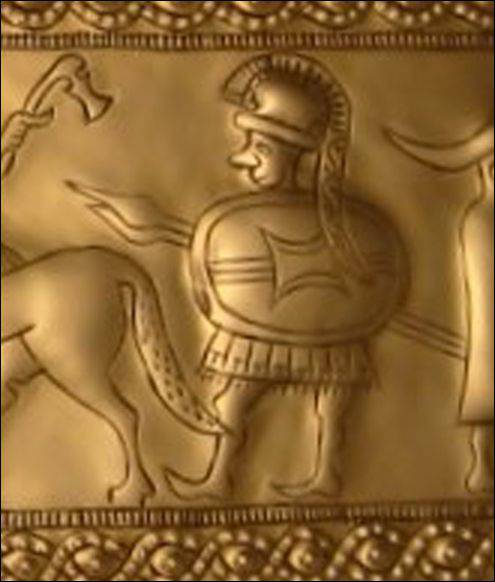 Celtic warrior with a shield and spears with tips of characteristic shape. Illyrian Sithylum from Vache (fragment). Bronze. Around 500 BC. er National Museum. Ljubljana

Handles of swords were made of wood, covered with leather and therefore they practically have not reached our time. The traditional form of the handle was in the form of the letter X, a kind of memory of the “antenna” swords of the Hallstatt era. Sometimes they were made in the form of a human figure with arms raised upwards. The late influences of latein IV swords were often influenced by Roman influence, as shown by the discovery of a sword in Dorset. 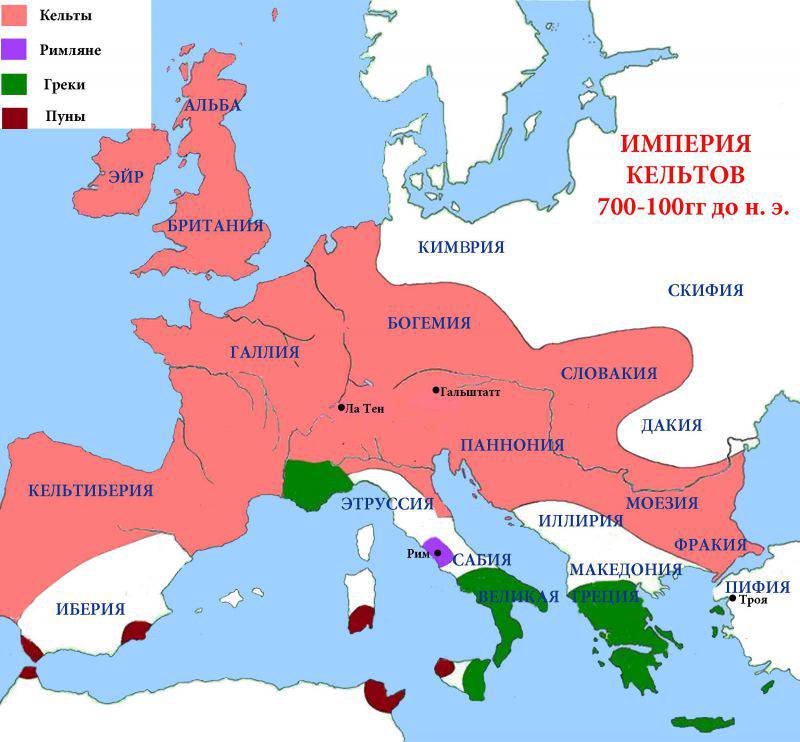 Diodorus wrote that the Celtic swords were worn on the right side, hanging them on an iron or a bronze chain. The length of such a chain ranged from 50 to 60 cm, and on one side there was a ring on it, and on the other a hook. Peter Connolly believes that all this was arranged somewhat wrong, since the description is confusing. In any case, the chain was, the ring was, the hook was, and how we really had to decide in the course of field experiments. Well, the belts themselves were made of leather, and several such belts were again taken from the lake at La Ten. 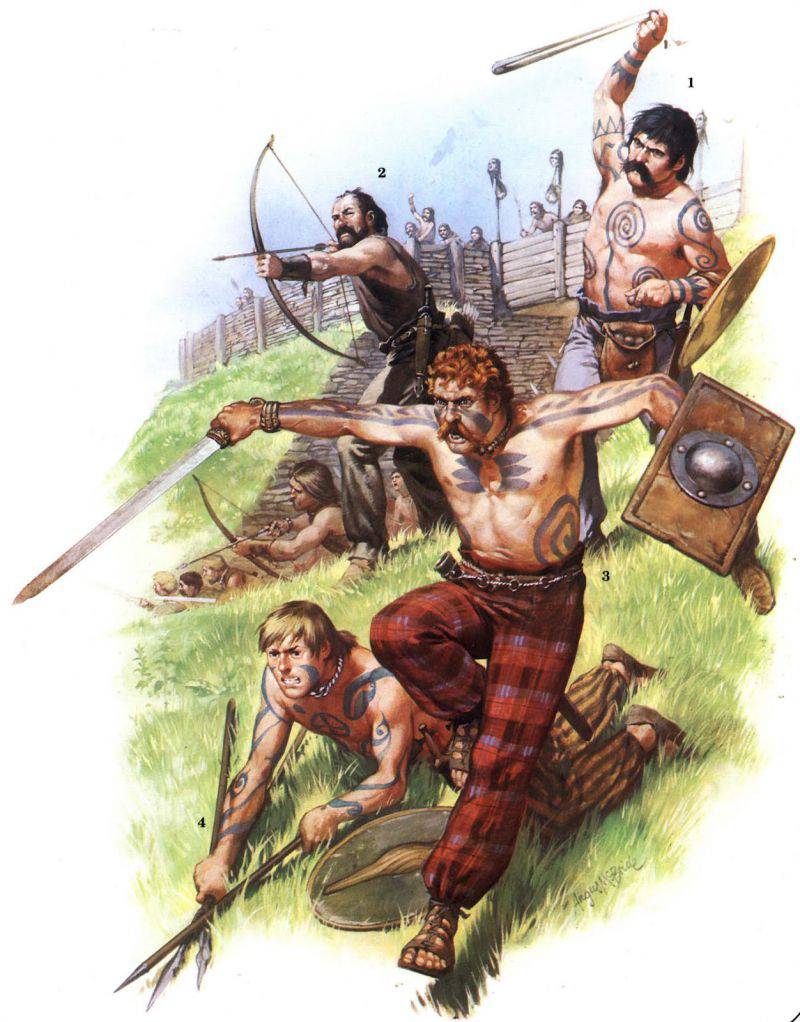 It was customary to talk about Celts as warriors who fought, above all, with swords. But Diodorus gives a description of the Celtic copies, and their tips are regularly found in graves. And here, according to Connolly, the question arises: if there are so many tips, then ... it means that the Celts fought not so much with swords, as with spears. Found three spears with a length of 2,5 m and this is clearly not a dart! Darts are also found, but many tips are very large, which are not suitable for them. And Diodorus calls the sizes of the tips of the copies: 45 cm and more, and these were actually found, and one did have the length 65 cm! 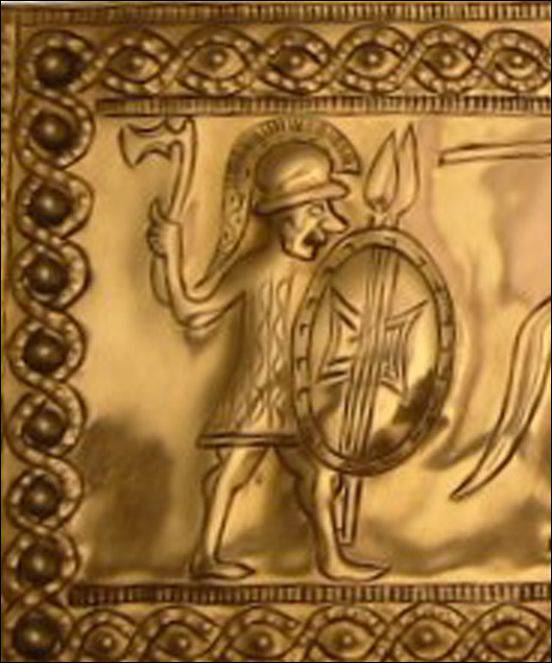 Their form was rather unusual: at first they expanded at the hub, then gently narrowed to the tip. Wavy tips are also known, about which Diodorus reports that they inflicted especially dangerous wounds. It is also known that the Celts also adopted something from the Romans and, in particular, their famous pilum darts. They are found at the site of the excavations of many Celtic settlements in southern Europe.

At the same time, Connolly believes that Diodorus is very exaggerating when he reports that the Celtic shield was as tall as a man. In La Tennes, the remains of three shields were found approximately at 1,1 m high. Three shields discovered by archaeologists were made from oak wood. In the center, the thickness reached 1,2 cm, and at the edges was smaller. The two preserved traditional vertical rib, characteristic of Celtic shields. Umbon above the recess to accommodate the handle covered his hand from the blow. At the same time, they were of different shapes, ranging from a simple metal rectangular strip nailed onto a shield and its edge at the location of the handle, to umbones resembling butterfly wings or a bow tie with a knot (bulge in the middle). A number of umbons resemble the Roman ones: this is a flat base with holes for rivets and a hemisphere above it. 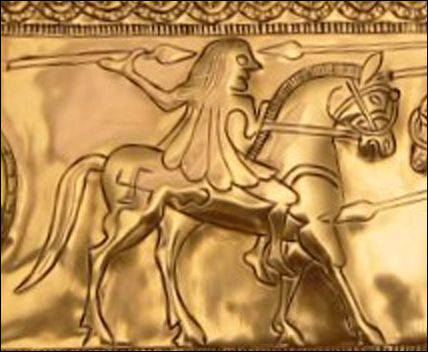 Rider with a spear. Illyrian Sithylum from Vache (fragment). Bronze. Around 500 BC. er National Museum. Ljubljana

Were the shields covered in skin? A tree covered with nothing would have cracked from the blows of the sword - such is the opinion of Peter Connolly. However, there are also shields without stitching and, in his opinion, they were made specifically for burial. But the shields, which have skinning and leather or metal edge along the entire edge - obviously fighting. Such a shield could have a weight of 6-7 kg - wooden base 4 kg, plus leather 2 kg, plus 250 g Umbon.

The Battersea Shield, found in the Thames, is one of the most famous examples of ancient Celtic art found in the UK. This is a wooden shield, covered with a thin sheet of bronze in the laten style. The shield is kept in the British Museum, and its copy is in the Museum of London. Shield dimensions: length - 77,7 cm, width 34,1 – 35,7 cm. Refer it to 350 - 50's. BC er Well, they lifted it from the bottom of the River Thames in London in 1857, during the excavations at the Chelsea Bridge. The Battersea Shield is made of several pieces held together with rivets hidden under decorative elements. The decor is in typical Celtic Laten style and consists of circles and spirals. The shield is decorated with red enamel and looks very beautiful, but its bronze sheet, as archeologists say, is too thin to provide effective protection in battle, and there are no combat damage on it. Therefore, it is believed that this shield was thrown into the river as a sacrifice.

The obvious similarity between the Roman Scutum and the Celtic Shield suggests that they have a common origin. But Celtic is more ancient and judging by the findings of the same umbons, it is clear how it was improved. Most of the Celtic shields have the shape of an oval, and early Roman scutums have the same shape, and with the same vertical edge. But there are differences. For example, the Roman shields found in Egypt in the Fayum oasis, the dimensions of which almost completely coincide with the dimensions of the Celtic shields (height 1,28 m and width 63,5 cm), were made using a completely different technology. If the Celtic ones are made of a single piece of wood, then the Roman ones are made of three layers of birch plates, 6-10 wide, see. They were glued to each other perpendicularly to each other, and they were also pasted on top from above. The handle is horizontal. Polybius, however, reported that they were glued together from two rows of plates, and were covered with a coarse cloth and then skin on top. 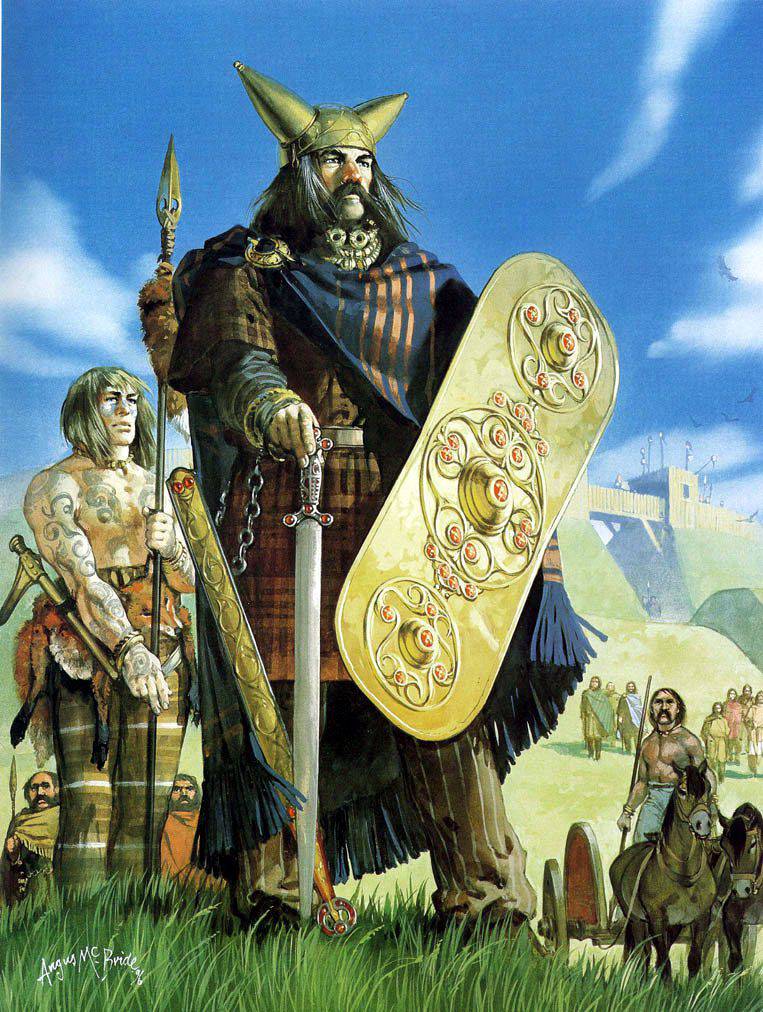 Celt in Waterloo Helmet and with the Battersea Shield. Figure by Angus McBride.

Peter Connolly reports that he made a replica of such a shield, and its weight turned out to be equal to 10 kg. At first it was considered incredible, because it was very difficult to use it. However, then almost the same shield was found in England, and it became obvious that these were not accidental finds, but that “it was so”. And, by the way, it became clear why the same Diodorus believed that the Celtic shields were worse than the Roman ones. After all, even though they were of the same design, it should be noted that the shield made of “plywood” will always be stronger than all-wood. 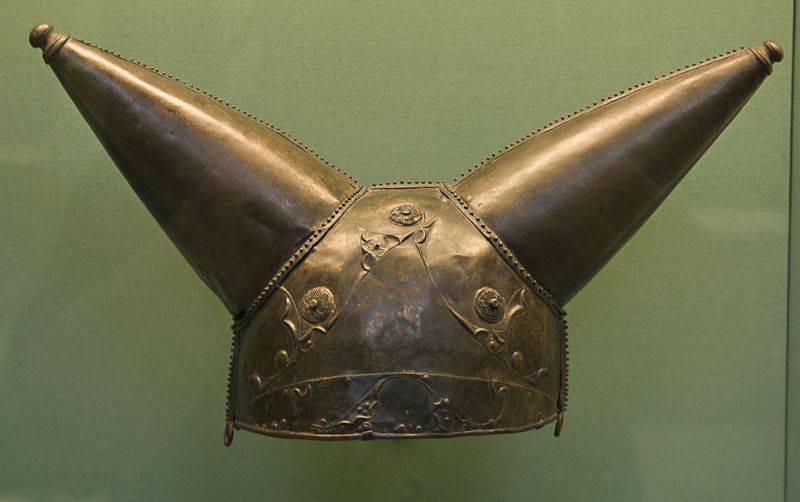 Another original find found in the Thames at Waterloo Bridge was the helmet, known as the “Waterloo Helmet”, painted today in the British Museum. It was made approximately in 150 - 50. BC. Initially, this helmet had a brilliant golden color and is decorated with red glass rods. It was hardly used in battle, and probably was a ceremonial headdress. Helmet is the only horned helmet in Europe. It was made of sheet bronze in parts, and then they were all joined together with bronze rivets. The decor on the front of the helmet is repeated on the back.

However, the shields of the Celts, judging by their images, could be rectangular, and hexagonal, and round. Diodorus reports that they were decorated with bronze patterns, but most likely they were simply painted with colors, and the bronze shields with a pattern on the surface were most likely ceremonial rather than combat destinations. 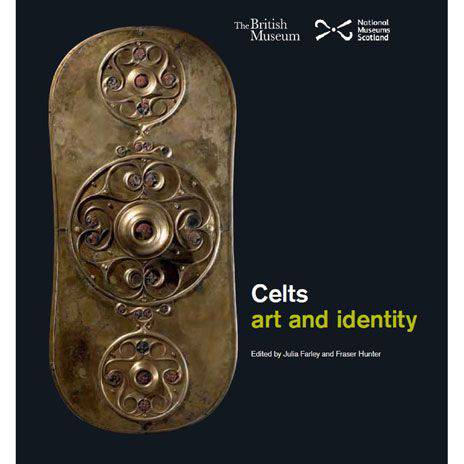 The “Battersea Shield” is very popular in England. For example, his image adorns the cover of this calendar for 2015 a year worth 40 pounds sterling.

Ctrl Enter
Noticed oshЫbku Highlight text and press. Ctrl + Enter
We are
Peter Connolly on Celtic helmets and chain mail (Part of 4)Peter Connolly on the Celts and their Arms (Part 2)
25 comments
Information
Dear reader, to leave comments on the publication, you must to register.