December 1 2015
24
While the attention of the world remains chained to the Middle East and specifically to Syria, an event has occurred in the other hemisphere that is hardly worth ignoring. Speech on the official announcement of the final results of the presidential elections in Argentina. These results should not be overlooked, if only because recently Argentina has become one of the largest Latin American trade and economic partners of Russia, which resulted in a significant increase in trade turnover between the two countries.


Thus, over the past five years, the volume of mutual trade between the Russian Federation and Argentina increased by almost 27%. This is an impressive figure, given the well-known economic difficulties that have recently been faced by the Russian Federation. After the introduction of retaliatory sanctions of the Russian Federation against the EU, the USA and a number of other Western partners, Argentina became one of the major suppliers of agricultural products to the Russian market. Volumes of delivery of Argentine fish and seafood to Russia increased by more than a third in the last two years. But why Russia itself can not provide the domestic market with its own fish products? - this is a separate question ...

The overall level of trade remains at a modest enough level for countries such as Russia and Argentina (just over 1,5 billion dollars), but there were (before the same announcement of the results of the presidential elections in Argentina) there was every reason to believe that the substantial growth in bilateral trade would continue. Agreements were made on the supply of mineral fertilizers, ferrous metals, fuel, electric motors, and paper to Russia by Argentina. In the spring of this year, Moscow and Buenos Aires signed a memorandum of understanding and cooperation in the field of nuclear energy. Rosatom actually got the right to work on the construction of a reactor at the Argentine nuclear power plant. In addition, Russian companies have increased their presence in the market for the maintenance of hydroelectric power plants in Argentina.

Russia and Argentina have managed to increase the volume of military-technical cooperation. The Ministry of Defense of the Latin American country purchased helicopters from the Russian Federation (Mi-171Е) and sea tugs for the needs of the Air Force and Navy, respectively.

Now a real Mkhatov pause is hanging in the air, after the completion of which it is far from a fact that cooperation between Moscow and Buenos Aires will follow the same path of mutual benefit and adequate perception of each other - as real partners. I do not want, as they say, to say something unkind, but some concerns about the further development of Russian-Argentine contacts arise.

The main reason for these fears is that Christina Kirchner leaves the presidency of Argentina and instead of her, the candidate from the country's opposition party Republican Proposal, former mayor of Buenos Aires, president of the Boca Juniors football club Mauricio Macri, becomes the head of state. . 10 December he will take office.

Makri went to the second round of presidential elections, where he beat rival Daniel Scioli, representing the Front for Victory party - a political force headed by Christina Kirchner. As a result, Makri - 51 with an odd percentage of the votes, Scioli - 48,6%. This is despite the fact that in the first round Scioli scored more than the other votes (37,08% versus 34,15% in Makri).

The new president of Argentina is a man who, in fact, built his entire election campaign on the basis of contradictions with the party of Christina Kirchner and the candidate of this party, Scioli.

From the October statement by Russian President Vladimir Putin, in which he addressed Christine Kirchner:
Whoever wins, I expect, he will support the course you have taken to strengthen multi-dimensional partnerships with Russia.

It should be noted here that Vladimir Putin was somewhat cunning. Certainly, from the point of view of strengthening those very many-sided partner relations with Russia, the victory of Christina Kirchner, the continuer of the party course, would be considered more positive. After all, if Scioli won, one could at least be sure that the reversal of Buenos Aires’s relations with Moscow at 180 degrees is definitely impossible. But now there is no point in talking about what would happen if Scioli won, for the simple reason that he lost the election.

Where it is more relevant to consider the question of who is Mauricio Macri? As the saying goes, hoo from mr. Macri? 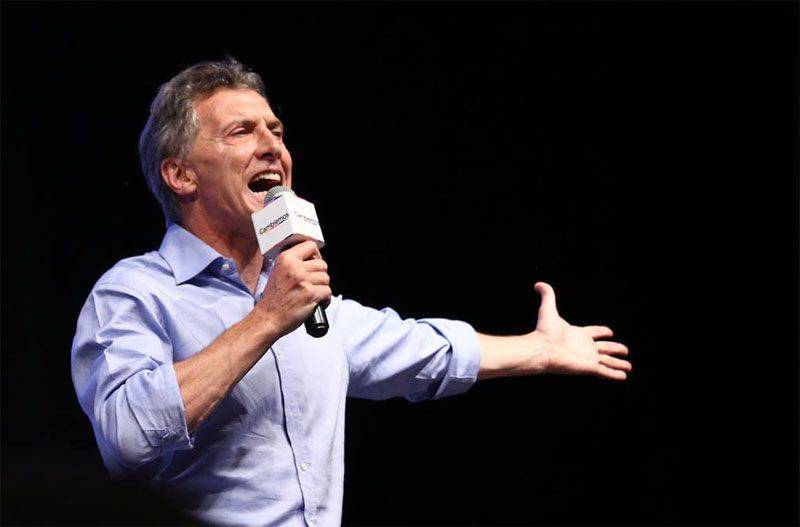 If you follow his campaign promises and statements during the election campaign itself, you can catch the following trend: Makri is an ardent supporter of warming relations with the United States of America. His statements that he would return Argentina to the “world”, where the world means the USA and its allies, met with warm support among young people (voting in Argentina can be done from 16 years), thanks to which he received a majority in the elections. The young generation of Argentines, apparently decided that if there are slogans about friendship with the United States, the American banks will abandon their claims to Argentina, as a result of which, even with a relatively stable macroeconomic situation in the country, Argentina has repeatedly been declared or tried to declare bankrupt, hanging with pocket agencies default rating.

The main goal of Makri is that Argentina should not suddenly appear among the BRICS member countries, and the possibility of such membership has recently been talked about very actively. This goal seems to be pursued by the main foreign partners of the Argentine Republicans - the Republican Party of the United States, which, perhaps, more of the Argentine supporters of Macri rejoiced at his victory in the presidential race.

It should be noted that Makri also has what is called a grudge against the center-left political forces of the country - the forces of the outgoing president, Christina Kirchner. The fact is that at one time Macri, who is a representative of the Argentine oligarchy, was faced with the need to “actively share” with the state budget in the implementation of his business projects. The left-centrists demanded this of him, which clearly hurt the future president of the country. Is revenge planned? .. In fact - yes. Immediately after the election victory, Makri announced a revision of the attitude to the social sphere in the country, greater economic liberalization with an active search for foreign (first of all, of course, American investors).

But the intra-Argentine clashes themselves are not at all what is primarily interested in this situation. The main interest is how abruptly the course of the new authorities of Argentina will change, and there is almost no doubt that it will change. Of course, the policy of supplying the same shrimp or beef to Russia is not the aspect that the new leader of the country will review (he needs it? ..), but the issues of strategic partnership, including the energy and military-technical sphere, are hardly republican friends from the United States will be developed with Russia in the future, even if the Makri himself wants it badly ...