United Europe is preparing another trip to the east

December 2 2015
111
For three months in the European Union, an administrative branch has been created, created exclusively for the information war with Russia. The official name of the group is East StratCom Team, which is short for Eastern Strategic Communications Team. In Russian - "Eastern Group of Strategic Communication." The purpose of the group, announced in open documents, is proactive communication of the policies and activities of the European Union near its eastern borders and beyond. Original in English: in the Eastern neighborhood and beyond.

Hitler first came up with the European Union, but the rest didn’t like it

Having learned that a united Europe has started some kind of strategic event not only near, but also further its eastern (that is, our western) borders, the eastern person becomes annoyed and uncomfortable. Where is this "next"? The authoritative British newspaper The Guardian, based in Manchester in the 1821 year, lists that Armenia, Azerbaijan, Belarus, Georgia, Moldova and Ukraine are “near” the borders of the European Union and that Russia itself is (“next”) - Russia itself, release from 25 Jun 2015). So far, Armenia, Azerbaijan and Georgia have no common border with the European Union. But he already considers them as his patrimony and is going to dispose of them in a different way than at home, but, let's say, like that of a mother-in-law at a dacha. More specifically, the European Union is going to “oppose the propaganda of Russia” through the promotion of “European values” in these countries.

Drang nach Osten (drang nah osten, “rush to the east”) is the blue dream of Europe. Over the past ten centuries, at least once a century, the peoples of Europe gather and go east with wars. In the Middle Ages, Western people simply robbed, killed and burned eastern people alive. Later they did the same, but since 1812, in the West, the conviction has taken root that “an enlightened Europe brings civilization” to Russians. Europe’s attempts to “civilize” the Russian people ended very sadly for the “civilizers” in 1814 and in 1945. But Russian is also not in vain. Is it again?

To find out what the united Europe has prepared for us this time, we turn to the original source. This is an official document of the European Union in English with the index Ref. Ares (2015) 2608242 - 22 / 06 / 2015. The publication date is alarming, exactly 70 years from the day when the European Reich went east. This document is called Action Plan on Strategic Communication, in translation - Action Plan for strategic communication.

Item 1. Situation. The use of mass media has played an important role in the political, economic and security processes that have affected the European Union’s eastern neighbors over the past year and a half. 20 March 2015, the Council of Europe recognized and stressed the need to accept the challenge of continuous disinformation campaigns of Russia and obliged the High Representative of the Union for Foreign Affairs and Security Policy (Federica Mogherini. - Note of the author) in cooperation with the EU member states and the EU administration to prepare an action plan for strategic communications no later than June.

Item 3. Goals
1. Effective clarification and promotion of EU policies and values ​​in Eastern European countries.
2. Strengthening the influence of the media and support for independent (from Russia. - Approx. Author) publications.
3. Increasing the criticality of the audience in relation to misinformation from external sources and improving the EU’s ability to counteract such activity.

Item 4. Leading principles.
The first and most important thing is the formation of positive and effective messages in the media in relation to the EU policy in this region.

The above are only the first four points of the plan (with large abbreviations). But the general idea is easy to understand. United Europe has once again come to grips with us at the highest level. No matter how we continue to "dodge", the next "civilization" we can not escape. At least through the media, NGOs, social networks and the Internet. Having understood that we will again be proactively (a euphemism for the word “forcibly”) “civilized”, it is necessary to figure out what awaits us this time. What kind of “values” will we be vaccinated and grind a united Europe?

In any state, the capital is not only the administrative, but also the spiritual and cultural center of the country. The capital is a mirror of the state, smaller in size, but no less capacious in its content. The spirit of the people, its traditions, continuity and culture are intertwined and visibly present in any capital. The largest and most developed state in the European Union is Germany. Its capital is Berlin. 16 June 2001 to December 11 2014 Berlin rules burgomaster Klaus Wowereit - German politician, chairman of the Federal Council of Germany in 2001 — 2002, homosexual. With 1993, Wowereit openly lives with his “friend” Jorn Kubitsky. This is the “European value”, the right of homosexuals to civil marriage.

It seems to some that it is a trifle. Who cares about who does what at home on the sheets? Intimate life is a personal matter of each person. But civil marriage is the foundation of society. Civil marriage gives the right to the adoption and upbringing of children. No matter how hard homosexuals try, they cannot create children in a natural way. And artificial insemination and surrogate "motherhood" are not available to every ordinary psychopath. But in the European Union, a juvenile justice system was invented. To withdraw children from normal families and give them up for education with this.

Another European value is the struggle for the purity of the race. So far only in zoos, but who knows what will happen next. After all, Western Europeans never thought that Slavs were people. They even invented a special “scientific” definition about us, “subhumans” (Untermensch). In 1941, under the banner of the Third Reich, following the hordes of European armies, the Einzatzkommando (“target groups”) and the Sonderkommando (“special groups”) moved east. Their goal was the physical destruction of "subhumans." The USSR got four Einsatz groups, formed according to the geographical principle: group “A” - the Baltic countries; "B" - Smolensk and Moscow; "C" - the area of ​​Kiev; "D" - the southern part of Ukraine. Group "A" exterminated 249 420 people, "B" - 45 467; “C” - 95 000; “D” - 92 000.

Last year, European bureaucrats thought that the giraffe Marius came into existence as a result of the mating that was unacceptable from the point of view of European rules on race purity. In the morning of February 9, 2014 in a zoo in Copenhagen (Denmark) Marius was called in with a piece of rye bread, and when he trustingly pulled his face towards him, he was shot in the head with a rifle. Then Marius was butchered and fed to the lions in front of 4 — 5-year-olds. 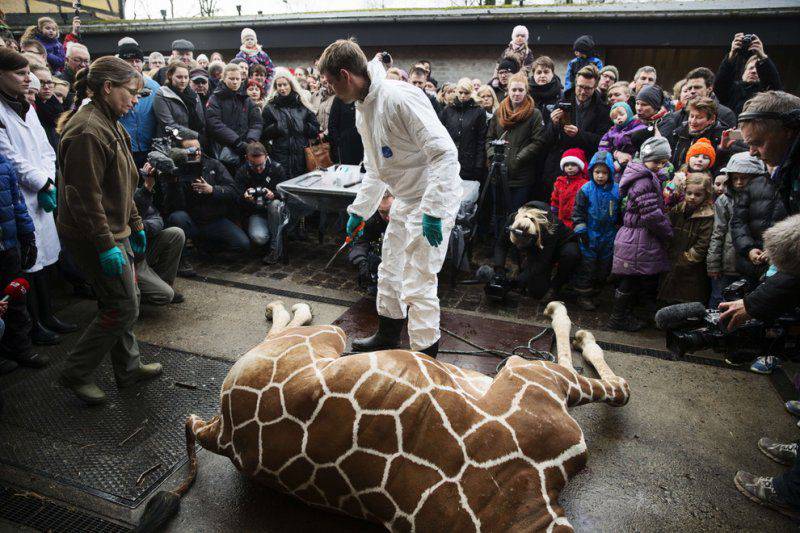 9 February 2014, Copenhagen Zoo. Young European "humanists" will know in a minute what the giraffe consists of

You can talk for a long time about European values, but not worth it. There is no point in trying to be an “expert” and sort out the manure varieties. And it is so clear that the European values ​​in Russia will perhaps be accepted by Tolokonnikov, Pavlensky and others like them. As soon as he realizes what he is talking about, any normal person will desperately resist European values ​​to the last opportunity. Nevertheless, the united Europe had already gathered the Einzatskommandu, appointed the “Gruppenführer” and clearly indicated the way to the east.

ACTION PLAN ON STRATEGIC COMMUNICATION (in English)
Ref. Ares (2015) 2608242 - 22 / 06 / 2015
1. Context
It has been noted. 20 March 2015, “stressed disinformation campaigns He was in charge of strategic communication. ”
The European Council further refers to the “establishment of a communication team” as “a first step in this regard”. A start-up team (East StratCom Team) has now been established (see point 5.a)
StratComTeam in cooperation with the EU institutions and the Member States. It has been noted that it’s not a problem. StratCom Team

3.Objectives of the Action Plan
This can be summarised as:
1.Effective EU policies and values ​​towards the Eastern neighborhood;
2.Strengthening of the overall media environment including support for independent media;
3.Increased public awareness of disinformation of activities by external actors and potential activities.

4.Effective communication to the wider public - guiding principles
EU strategic communication towards the region. It can, over time, have a positive impact on their daily lives. It should be noted that this message should not be seen. It is clear that there is no need to explain the rules.
This is a positive narrative. Where necessary, the EU should also be prepared to anticipate and respond to disinformation relating to the EU.

5. Key areas for action
a) Increase EU Strategic Communication capacity
Inline with the European Council of 2015, a start-up team has been established within the EEAS, with contributions from EU institutions. 1 September 2015.
The EU is focusing on its efforts in the Eastern Partnership. The team will be subject to disinformation campaigns. The EU’s Member States and the EU Member States.
It will focus on specific issues, including local issues. It will be coherent with the EU community efforts and the EU Member States.
b) Work with partners and development of networks
This is a keynote to the East Stratcom Team. Amplification. Assignment to the Eastern Neighborhood.
It will be a number of countries that have been approved by the EU. In parallel, he will be developed in the region. Contacts will also be maintained with civil society actors.
c) Communication activities on EU funded programs, projects and activities in the Eastern Neighborhood
Understanding of the EU’s international community’s policies and activities. projects. Stratcom Team identified.
d) Support for freedom of the media and freedom of expression
In the United States of America, it’s not. The EU will work closely together with regard to freedom of expression, assembly and association.
e) Public Diplomacy Initiatives in the neighborhood
It’s not a problem. ”It’s not a problem. the EU. Support for the Erasmus Plus program.
f) Capacity building for journalists and media actors
The EU will support the development of the environment and the community of the Nenets-2015. This will be an opportunity to make it easier to exchange business practices. It is important that the EU will consider it. Coordination on the ground. It will encourage you to take care of your local reform efforts.
g) Supporting pluralism in the Russian language media space
The EU will ensure that communication is available in local languages. Consideration will be given to the European Endowment for Democracy (EED)
Feasibility Study on Russian Language Media Initiatives. A number of Member States are In the meantime, it’s not a problem.
h) Engagement with Civil Society
He said that he would like to take a look at the civil society forum.
i) Increase awareness, develop critical thinking media
Awareness of disinformation activities among the general public. EU Member States and partner states at all levels. This is a field of media literacy. The actors should encourage self-regulation of the media.
j) Strengthen cooperation in regulatory issues in EU Member States
During the meeting of the European Regulators of the Audiovisual Media Services (ERGA).

Ctrl Enter
Noticed oshЫbku Highlight text and press. Ctrl + Enter
We are
Results of the week. "Professor, his tail fell off!"Strangulation: the context, conduct and consequences of the American naval blockade of China
Military Reviewin Yandex News
Military Reviewin Google News
111 comments
Information
Dear reader, to leave comments on the publication, you must to register.