December 1 2015
108
In Washington, they made it clear to the Turks that flirting with terrorists would not be good. An unnamed representative of the White House, quoted by the Wall Street Journal, said that "the rules of the game have changed." “Enough is enough,” the official explained. “The border needs to be closed.” This man called the threat “IG” “international” and specified that it passes “through Turkish territory”. Moreover, the Turks are recommended to increase the contingent of troops on the 60-mile segment of the border with Syria. 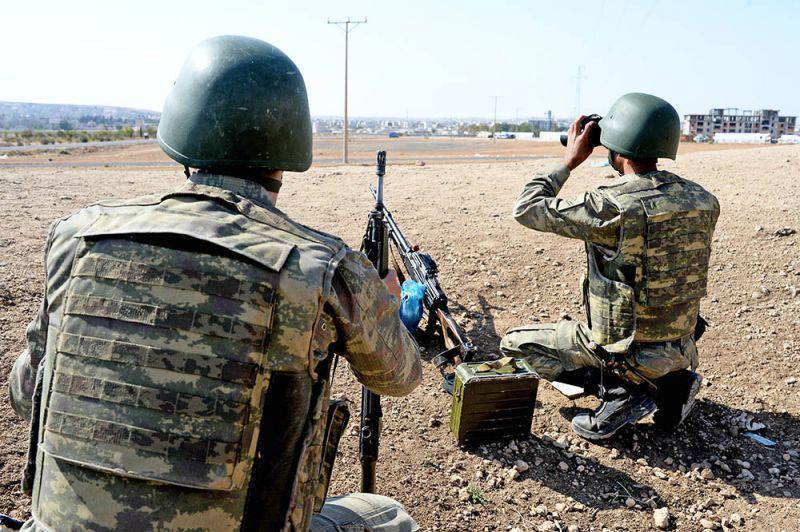 Correspondents write about it "The Wall Street Journal" Adam Entus, Gordon Labold from Washington and Dion Nissenbaum from Istanbul.

The Obama administration insists on Turkey deploying additional troops along the border with Syria to close the 60-mile segment of the border. It is this area in question, according to US officials, that is used by the Islamic State militants.

Officially, the United States did not indicate "a certain number of soldiers." However, according to a Pentagon representative, more than 30.000 troops may be required to close the border on the Turkish side. Only a cordon would require more than 10000 soldiers, one unnamed official remarked.

Turkish officials have already said that they agree with tightening border controls. Some measures are supposedly being implemented. However, according to Ankara, the Pentagon’s estimates regarding the number of troops on the border are too high. For some reason, Ankara does not give its own ratings.

In exchange for more active actions against the "Islamic state", Ankara wants to get more financial assistance from Europe: after all, the Turks have to "deal with its 2,2 million Syrian refugees." Also, the Turks want to create a safe zone in Syria - the implementation of the idea that the Obama administration "put aside", finding it "too risky and difficult."

American officials believe that the deployment of Turkish forces near the border, including infantry and artillery units, would be a real obstacle to the main transit routes used by the militants of the Islamic State. At the same time, this measure would put an end to the flow of foreign fighters moving to Europe.

Back in July, the US and Turkish leaders reached agreement in principle on joint efforts to counter the militants’s frontier, but the implementation of the plan was under threat due to friction between Turkey and the US, as well as some disputes in the Obama administration. The United States was preparing airstrikes against the militants together with the Syrian rebels, but this plan stopped because of the Russian airstrikes and the likely air chaos. The plan was again on an urgent agenda because of the terrorist attacks in Paris. But the Turks shot down a Russian military aircraft, and this added new complications.

US officials are now saying that Turkey should substantially increase the density of its troops along the border, in particular, between the two border cities, which, according to US intelligence, the Islamic State uses as transit points.

“The rules of the game have changed. Enough is enough. The border should be sealed to the castle, - said a senior official from the Obama administration to Ankara. “This is an international threat, it comes from Syria and passes through the territory of Turkey.”

Turkish officials respond that they are ready to take the necessary measures, but under the condition that the United States will also take measures. "Turkey is determined to clear 98 of the border between Kilis and Jerablus from Daesh," said a Turkish senior official. He added that no one, including the American partners, needed to give advice to the Turks or make warnings.

Combined with the deployment of Turkish military forces at border points, the United States, in principle, agrees to provide air support for the coalition of rebel forces that is fighting the Islamic State in Syria. Turkish officials consider these very ground operations inside Syria, with the support of the United States, a priority, the publication points out. But the chiefs from the Pentagon doubt that Turkey will be able to collect a sufficient number of rebels in northern Syria who could not fight not with the Assad regime, but with the "Islamic State", especially if we recall the support for Assad by the Russian air forces.

As for the safe zone, both the Pentagon and the White House have long opposed the creation of this formal territory. US officials say it would drag Washington into the war.

As the magazine notes, American officials warned Ankara: it may face the “significant” objection of the European powers if it cannot block the borders of foreign fighters who are seeking to return to Syria from Syria. Paris attacks became a "wake-up call" for the Turks and showed that "they do not control this problem".

At the recent G20 summit, Barack Obama told Recep Tayyip Erdogan that Turkey should act quickly. The border area must be cordoned off to reduce the risk of new terrorist attacks in Europe and beyond.

During the meeting, Mr. Erdogan, responding to Obama, agreed on the need to prevent the movement of Islamic State militants across the Turkish border.

The Turkish President does not like the fact that ethnic Turkmens came under Russian airstrikes. Mr. Erdogan warned Russia, saying that such attacks should be stopped.

US officials say that in recent months, Turkey has taken some steps to "slow down" the flow of foreign fighters, including closing the main border points along the country's border with Syria.

However, these “some steps” are incomparable with the effectiveness of the actions of the Kurds. As an example, US officials point to the success of the Syrian Kurdish forces who cordoned off the border on the eastern banks of the Euphrates River in Iraq. The operations carried out there by the Kurds made it possible to almost completely block the flow of foreign fighters.

The Turks object to this: they say, Washington itself is not able to reliably close the American-Mexican border. And the Americans need to understand from this how difficult such operations are.

US officials were "annoyed at this comparison," the magazine notes. “If we were at war with Mexico, we would close this border,” said a senior official from the presidential administration.

By the way, let us add, the question of blocking the Turkish-Syrian border, through which the militants of “IG” freely move, was sharpened by none other than Francois Hollande. After the terrorist attacks in Paris, the topic of militants in Europe has become truly “topical”, and the French president wants to take action not in words but in deeds. A "case" is just on the Turkish border.

A few days ago, F. Hollande offered to take measures and close the border between Turkey and Syria. “He proposed to take concrete measures to close the border between Turkey and Syria. We actively support this and are open to agreeing on practical steps, of course, in cooperation with the Syrian government, ”said Russian Foreign Minister Lavrov at a press conference after talks with his Syrian counterpart Walid Moallem. "We are convinced that, having closed this border, we will largely solve the tasks of eradicating terrorism on Syrian soil," the newspaper quoted Lavrova "Sight".

And it’s not at all surprising what the Russian foreign minister said about Turkey. He noted that Moscow and Damascus are accumulating more and more questions to Ankara about her interest in actually normalizing the situation in Syria.

Syrian Foreign Minister Walid Moallem also expressed his opinion. He said that Turkey supports the terrorists operating in Syria and in general "has been beating Syria in the back for five years."

And it would be strange to think, we note in conclusion that Ankara, which for years 5 “beats Syria in the back,” would suddenly now abandon its long-term strategy aimed at overthrowing Assad. Recall that in 2013, Erdogan called Assad is a "butcher" and a "killer."

Observed and commented on Oleg Chuvakin
- especially for topwar.ru
Ctrl Enter
Noticed oshЫbku Highlight text and press. Ctrl + Enter
We are
Results of the week. "Professor, his tail fell off!"Results of the week. “I told him, he said: the taverns and women would be brought to Zugunderra!”
108 comments
Information
Dear reader, to leave comments on the publication, you must to register.