November 30 2015
56
American analysts, who are in opposition to White House politicians and hawkish congressmen, believe that the “voice of reason” in the world today is not the advanced democracy in the person of the United States, but the Kremlin, and specifically Putin. The bloodthirsty politicians of the West organize confrontations and unleash wars, and the Kremlin’s master does not believe in their “peaceful ideas”. And it is reasonable. In this context, the well-known publicist P. Buchanan, criticizing the attitude of the West towards Russia, points to B. Obama’s lack of a clear position regarding the Turkish “provocation” perpetrated by R. T. Erdogan. And such inattention of the White House to the strategy may lead to war with Russia. At least its risk is great. 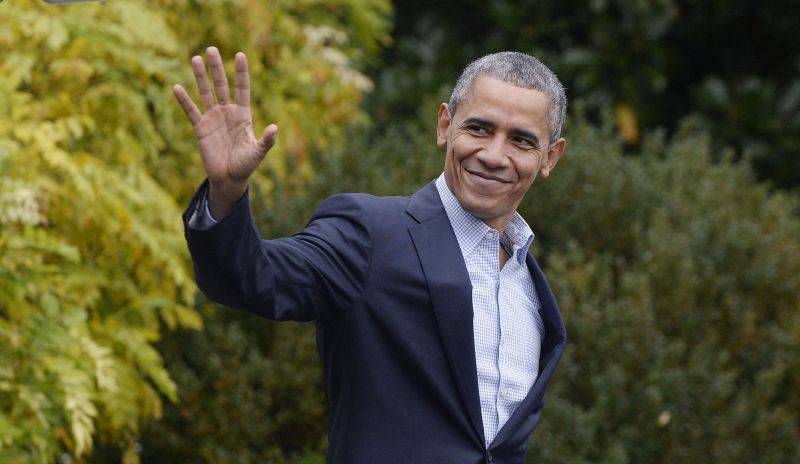 B.H. Obama walks, thinking about the climate and the future of the planet

Theorist of social systems and the writer Norman Pollack in the journal "Counter Punch" writes that historical a parallel for Syria today is the Spanish Civil War of the late 1930s. The only difference is the breadth of the conflict, the arrangement of “figures” on the “board” and, of course, ideology.

Nazism Pollack declares a factor driving US aspirations. Capitalist Washington wants to confront left-wing alternatives in the world. Obama is the same Franco, only his focus zone is deeper and there are more influence instruments. The United States, the European Union and NATO are not meant to destroy revolution or communism as such (there are practically none, Moscow follows the capitalist path, it is far from socialism), but Russia, and even better, China. After all, Moscow and Beijing are “blocking” the statesman’s global “hegemony”, which wants to remain the vanguard of the militarized capitalist system, based on the suppression of left-wing socio-economic movements and governments.

US policy - ordinary totalitarianism. And the future that Obama and others like him represent is based on totalitarianism. Everything that prevents US domination in Asia, in Latin America, in Africa, in any third world countries, the West in the face of its “hegemon” should “keep in check”. All the "third" should be backward, not be able to live autonomously, should be isolated from each other, and ideally - to obey and even "servile" before the bosses from Washington. In the postmodern world, there is no place for people like Assad, not to mention Fidel or Che. And Washington would be better to flirt with the "IG" than with states that reject religion as the basis of social organization.

Further the publicist passes to Putin. He does not consider the owner of the Kremlin to be suitable for “democratic world leadership,” since the KGB is an organization that suppresses freedom. However, at a time when global confrontation is approaching, Putin is largely a “voice of sanity”, contrasting with Western slogans and institutions like the “domesticated” UN, IMF, World Bank, and trade agreements like the Trans-Pacific Partnership.

The author writes that Putin, as well as Comrade C, "are free from any illusions" with regard to the West. They do not believe in the construction by the West of "truly peaceful relations." Obviously, the Western powers headed for provocations, which confirms both the downed Russian bomber and the fact that the IG has not been defeated by the West. This grouping has opportunities for further expansion.

As for the downed aircraft, this action was planned not by Erdogan, but by the United States and NATO, a publicist believes. The plane was shot down in order to prevent a single response to the terrorists "IG" of Russia and the West, which was scheduled after the Paris attacks. EU and US leaders wanted to avoid a rapprochement with Russia "at any cost." Obama, this cross between Franco and Ribbentrop, “waited a while coquettishly,” and stabbed him in the back. Again, Putin was right in saying that he was stabbed in the back; the only question is who directed the hand.

Famous Writer Patrick Buchanan in the Journal "The American Conservative" writes that the decision of Turkey to shoot down the Russian military aircraft Su-24 was a "provocative and significant action."

It is impossible to believe that the pilot of the Turkish F-16 hit a Russian plane with a rocket without the permission of President Tayyip Erdogan. And one has to ask the question: “Why did the Turkish autocrat do this? Why is he at risk of colliding with Russia? ”

The publicist has the answer. Erdogan is probably far less indignant at the intrusion into his airspace than Putin’s success in supporting the Syrian regime of Bashar al-Assad, "whom Erdogan hates." Angry Erdogan and Russian strikes on the positions of the "Turkmen rebels" in Syria - after all, the latter are eager to overthrow Assad.

And what about Washington? Did he give Erdogan a “green light” to fire on the Russians?

These are very important questions, the author believes.

Turkey is a US ally in NATO. And if Russia strikes back, Ankara can immediately refer to Article V of the NATO Treaty and demand participation on its side in the war with Russia.

By the way, Putin could not be intimidated. Twenty-four hours later, his airplanes, ships and artillery had already struck the same Turkmen "rebels" and their jihadist allies, Buchanan said.

Politically, the Turkish attack on the Su-24 probably served to prevent a possible alliance between Russia and France, which could jointly bomb IS, which would lead to a "diplomatic turn" in the world.

And now it has become quite obvious: in the civil war in Syria, Turkey is taking the side of jihadists, and Russia is in a different camp, with Iran and Hezbollah, standing behind the Syrian regime.

But which side would Washington be on? There is no answer, since the strategy and decisions of President Obama seem to remain a mystery.

The threat of direct conflict with Russia, which is currently fighting, supporting the Assad regime, is great. American presidents have so far avoided confrontation with the 45 years of the Cold War, says Buchanan. However, now "a military clash with Moscow can become a reality." Does the White House see this?

A publicist shows on another possible battlefield between the forces of NATO and the Russian Federation. In the south of Ukraine power transmission towers were blown up - those that supply electricity to the Crimea. A state of emergency was declared on the peninsula. Russia said it would not buy products from Ukraine from now on and would think about stopping the supply of gas and coal. Meanwhile, Ukraine is dependent on Russian supplies of fossil fuels. Moscow’s hopes of lifting the sanctions on the United States and the EU, introduced after the “annexation of the Crimea”, seem to be in the past.

Coordinated these events - downed aircraft and undermining of power lines? Did Washington give "good" to Erdogan, did he sanction the Ukrainian strike on the Crimea?

Vladimir Putin has answer options. The Russian army and pro-Russian rebels in southeastern Ukraine are able to occupy Mariupol on the Black Sea and establish a land bridge to the Crimea within a couple of weeks, a publicist is sure. In Syria, Russians can succeed much faster than American or French forces.

And if Washington poddakivat Turks and help the "rebels" who are at war with the Syrian army, he at one point may be "face to face" with Russia. Has anyone wondered where this road leads?

It’s not for nothing that we add, far-sighted analysts in the West have persuade their presidents and prime ministers abandon Turkey to NATO and take Russia into the alliance instead. However, these analysts forget the purpose for which the North Atlantic Treaty Organization was created. They forget the purpose for which NATO created military bases throughout Europe, including Eastern. The main enemy of NATO has not changed, and this bloc is by no means a “defensive” force, as its general secretaries keep saying.

In addition, the global "hegemon" is not going to give up its dominant position on the planet. And therefore, any provocations that weaken competitors and strategic opponents will be publicly or tacitly welcomed. Erdogan knew that his White House anti-Russian actions would be pleasant. And Erdogan knew that NATO was behind him.

Ctrl Enter
Noticed oshЫbku Highlight text and press. Ctrl + Enter
We are
Geopolitical mosaic: militants run from Aleppo, and Buchanan said Obama's wars are naive, and America will have to get out of the Middle EastSyria: democracy or peace?
Military Reviewin Yandex News
Military Reviewin Google News
56 comments
Information
Dear reader, to leave comments on the publication, you must to register.