November 30 2015
19
The management of InfraTech told about the completion of the test cycle of its new thermal sights and nozzles for small weapons... Tests of the products of the Moscow company took place at the training grounds of the Russian Ministry of Defense. Among the tested novelties was the IT-615 thermal imaging sight, built on the basis of an uncooled microbolometric matrix with a resolution of 384x288 pixels and a 50 mm objective lens. For the first time this sight was shown at the international exhibition "ARMS & Hunting 2014", which took place at the Gostiny Dvor exhibition complex in Moscow.


The InfraTech Research and Production Company, which specializes in the production and development of night vision devices, was established in 1997 in the course of the reorganization based on one of the first private companies in the field of night technology in our country - SPE “RETRON” in 1991 year. Currently, InfraTech is successfully operating in the civilian market, while prior to 2004, most of the company's products were exported to the United States, the United Kingdom, Germany, Japan, and a number of other countries.

In today's realities Infratech NPK LLC is a Moscow-based company with a modern production and technical base and highly qualified personnel. The company has its own design office, mechanical production, assembly shop, technical control and testing department. During its existence, the company has created a huge number of innovative products that satisfy civilian consumers and professionals. Today InfraTech creates, manufactures and supplies consumers with specialized devices for solving various tasks: night photography and video surveillance; night patrols and protection of objects; night navigation on sea and river vessels; hunting and observation of the animal world; technical support of law enforcement agencies (MIA, FSB, MES) and special forces of the Russian army. 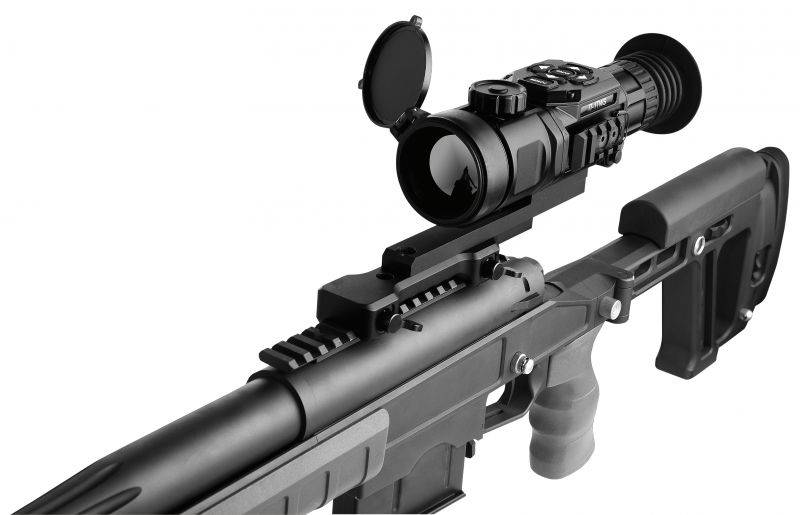 For these purposes, the company “InfraTech” mastered the production of monoculars, sights, night set-top boxes and nozzles for daytime optical and collimator sights, diode and laser infrared illuminators, special brackets for attaching devices to firearms and other accessories for night vision devices.

According to the manufacturer’s website, this thermal sight can be used for all-weather and round-the-clock surveillance, night hunting, search and rescue operations and support of security forces operations. The sight was created on the basis of the French matrix manufactured by Ulis, which has a resolution of 384 x288 pixels. The pixel size has been reduced from 25 µm to 17 µm compared to previous models. It should be noted that 17 μm is the most advanced technology for producing thermal imaging matrices. In essence, this means that a larger number of microbolometers can be positioned on the same area in the matrix, due to which IR-waves are captured better. The sensitivity of such devices increases by 30-40%.

Thermal Sight IT-615 is considered one of the best thermal imaging devices on the Russian market. Almost immediately, all made sights were sold out, after which the manufacturer switched to selling them only by pre-orders. The undoubted advantage of the new steel sizes. The sight has an exceptional compactness (dimensions 235x65x63 mm with a weight of only 0,65 kg) and provides decent image quality and complete noiseless operation, which is achieved due to the absence of a curtain.

The thermal sight IT-615 is made in an airtight, water- and dust-proof case (temporary sight under water is allowed) from light and high-strength aluminum and magnesium alloys, the sight is filled with nitrogen. The sight has the ability to recognize the temperature difference to 0,05 degrees. According to the information available on the network, the sight provides recognition of the growth 170-cm of a figure at a distance of 1500 meters, the range of aimed shooting is 600 meters. In this case, the shooter has the ability to select different types of sighting marks of different colors.

The sight is not difficult to control, the available digital menu has visual icons that facilitate the work of the shooter. The sight is powered from two lithium batteries of a fairly common size RCR123A or CR123A, which provide the sight for up to 5 hours. It is also possible to operate the equipment from a remote power supply or mounted battery pack. The sight is easily installed on different models of small arms, including those made in large calibers (.50BMG, 12,7 × 99 mm NATO). It can also be used for conducting hand-held observations as a monocular or as a telescope in the presence of a tripod.

Also, the Moscow company InfraTech was created on the basis of a thermal imaging nozzle IT-615TH, which is compatible with various types of optical sights and calculates in the future to produce a simplified budget version of the thermal sight. The principle of operation of a thermal imaging pre-objective nozzle IT-615TH is to obtain an infrared image of objects located on the ground, in real time. The device is able to work equally efficiently, both day and night, without the need for external lighting.

The detector device is able to detect a source of thermal radiation even in conditions of poor visibility and complete darkness. Often, the use of traditional night vision devices is significantly complicated under poor meteorological conditions. At the same time, InfraTech thermal objective pre-objective attachment allows detecting targets even in bad weather (heavy rain, snowfall, fog), as well as recognizing objects through dust curtains and shrubs. It is possible to use the device in the presence of light interference, including the recognition of targets located near bright light sources. At the same time, the sight is not afraid of “flare-ups”, unlike night-vision devices (NVD), which work on EOC. According to the InfoTech official website, the recommended price for the 615 IT thermal sight is 580 thousand rubles, the thermal imaging pre-objective nozzle IT 615ТН - 598 thousand rubles.

The successful design of the thermal sight, which was originally developed for the civilian market, primarily for hunting enthusiasts, aroused keen interest among the Russian military. For four months, the IT-615 thermal sight passed a test cycle at the sites of the Russian Ministry of Defense. As part of the tests, thermal imaging sights and thermal imaging nozzles of InfraTech were tested for dusting, long shooting, and work in extreme temperatures from -50 to + 50 ° C, in conditions of fog and high humidity. About testing this product to journalists RIA News Vadim Pavlov was told by the deputy general director of InfraTech. 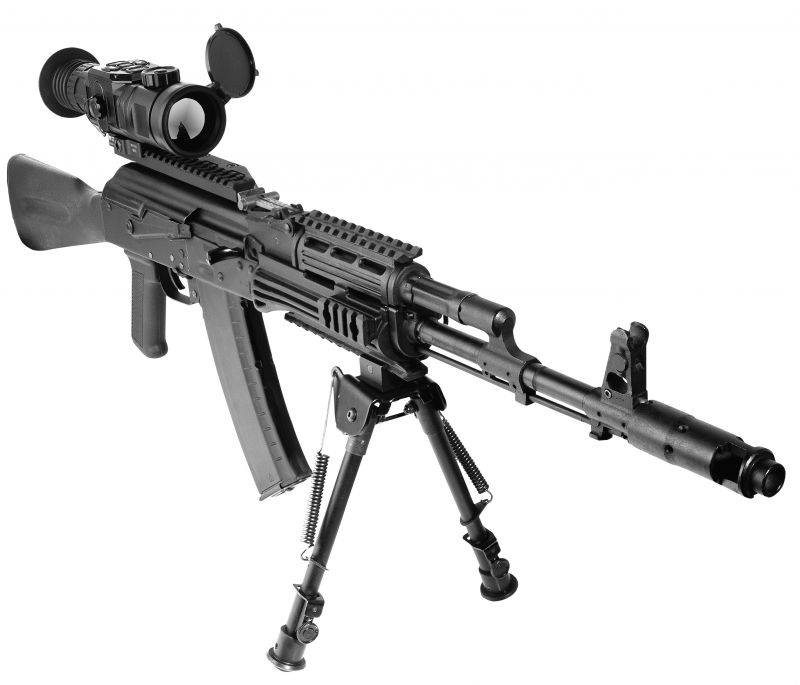 “The design of the sights presented by us is compact, lightweight, airtight. In addition to IT 615, we presented another innovative product - thermal imaging pre-objective nozzle IT 310TPN, which has no analogues in our country. This attachment allows you to fire a sniper rifle at a distance of 1,5 kilometers ”- told reporters to RIA Novosti. The X-NUMX thermal imaging sight can be used with various types of small arms, such as the Dragunov sniper rifle (SVD) and Vintorez BSS, the Kalashnikov machine gun, the Pecheneg single machine gun and other models of modern Russian weapons. So now it remains only to wait for all the formalities to be settled and the results of the tests will be a formal decision on the adoption of devices for service.

However, the presence of foreign components in the InfraTech sights, in particular the microbolometric matrix, which the Russian developer uses in his product, can be an obstacle on this path, according to the specialized weapon portal All4shooters.com. On the other hand, at present, a number of Russian enterprises (Angstrem OJSC, Cyclone Central Research Institute OJSC, AV Rzhanov Institute of Semiconductor Physics SB RAS) have intensified their work in this direction in order to get rid of dependence on imported components .

Ctrl Enter
Noticed oshЫbku Highlight text and press. Ctrl + Enter
We are
Double-barreled pistol of American Arms Double Barrel Derringer and its variantsModern Russian sights for small arms
19 comments
Information
Dear reader, to leave comments on the publication, you must to register.