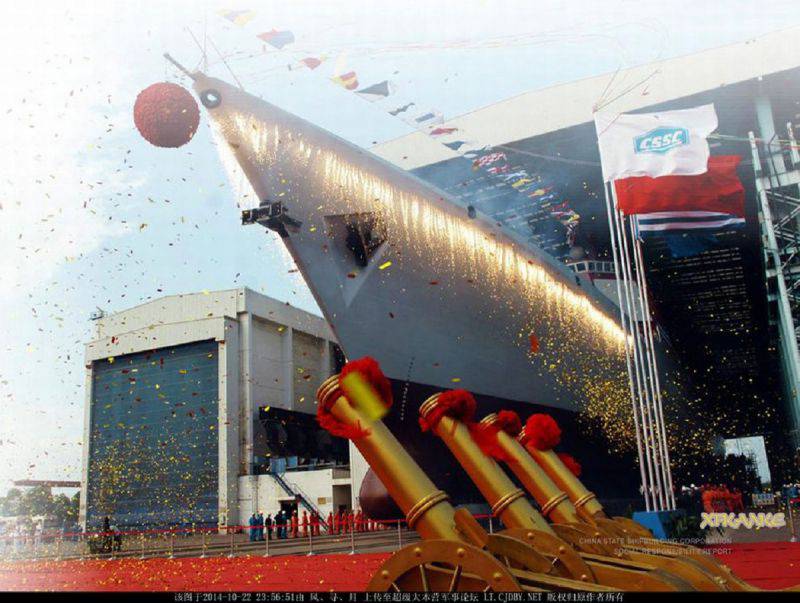 Demonstrative patrols of the South China Sea in the area of ​​the Spratly archipelago by the destroyers of the US Navy's URO, passing naval exercises of the “anti-Chinese bloc” in the Indian Ocean, as well as constant work on the modernization and updating of the naval forces of Japan and Australia with American funding and technical support, - all this testifies to the accelerated pace of the formation of a broad anti-Chinese coalition, which, according to the American plan, it will soon have to control the fleet and the Air Force of the Middle Kingdom at once in two strategic directions, which was described in detail in our analytical review of the reasons for conducting the Malabar-2015 exercises.

The most important sign of the growing military and strategic presence of the West in the Asia-Pacific region and the Indian Ocean is the rapid renewal of the Royal Air Force and fleet Australia, which are signing with American defense corporations more and more contracts for the purchase of military equipment that, for a "quiet" distant power of the Southern Hemisphere, can carry out tasks of strategic importance at a considerable distance from the Australian coast. One example of such significant acquisitions is a contract for the supply of 8 P-8A Poseidon anti-submarine aircraft, the first of which is already at the assembly stage in Kansas, the other is the purchase of the MQ-4C Triton marine reconnaissance UAV. Theoretically, the Australian fleet would have had enough modernized versions of the P-3C “Orion” anti-submarine aircraft with a flight speed of 500 km / h to control the territorial waters of Australia and the adjacent sections of the Pacific and Indian Oceans, but practically Australia needed 2 times faster, more advanced and more expensive machine “Triton” will generally allow observation within the limits of Western Asia and the Far East. Why do you think so serious aviation for such a provincial state? Of course, to support the US naval strategy in remote areas of the oceans. Naturally, the well-established economic ties in the Asia-Pacific region force both states to closely interact in almost all areas of foreign trade, but this does not apply at all to military-technical cooperation and geostrategic views, which Australia has diametrically opposed to Chinese and fully corresponds to American ones. 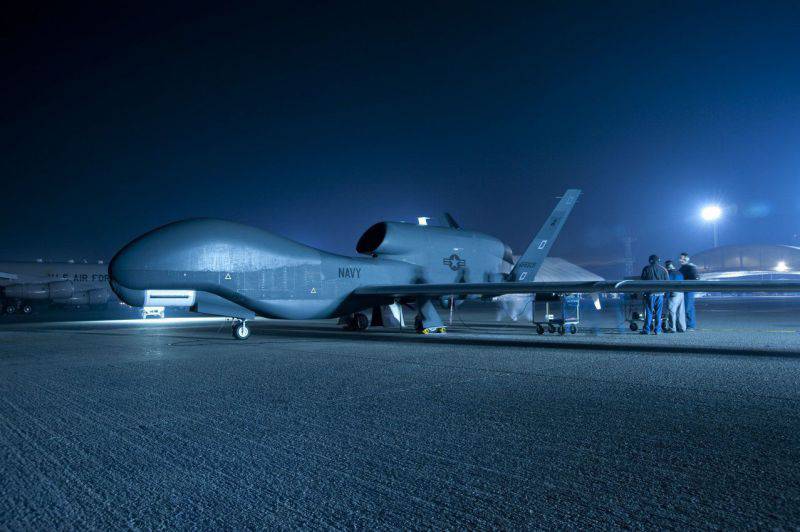 The unmanned strategic reconnaissance aircraft MQ-4C “Triton” purchased by the Royal Australian Navy are capable of conducting reconnaissance flights in the oceanic theater of attack in a radius of about 5000 km, covering almost the entire Indian and most of the Pacific Oceans. Installed on board radar with AFAR AN / ZPY-3 has a synthetic aperture mode, thanks to which at a distance of 100-200 km capable of detecting small surface targets, including logging and periscopes of submarines, targets can be clearly identified. "Tritons" will create a lot of inconvenience for the actions of the surface and submarine fleets of China on any of the marine SN, which creates difficulties in the formation of the concept of "three targets"

Recent years have clearly shown that the United States is trying to rally the largest team of the “anti-Chinese bloc” in the APR, and in part they succeeded in this by attracting India, Australia, Japan, the Philippines, and partly Vietnam.

Not being an official military-political alliance, the “anti-Chinese bloc” represents a rather formidable military structure in the regions of its influence, which has numerous advantages over the Chinese Navy and Air Force. In particular, this is achieved at the expense of the Indian Air Force and Navy, which is armed with more than 200 Su-30MKI and several hundreds of the most powerful anti-ship missiles "BrahMos" capable of destroying more than half of the Chinese naval personnel with a single prepared MRAU; the armed forces of the Chinese Navy until today were only subsonic C-801 / C-802 anti-ship missiles, which were no different from the American "Harpoons" and did not pose a serious threat to the Aegis system. Su-30MKI, and now French “Rafali” together with American-based carrier-based multi-purpose fighter aircraft F / A-18E / F “Super Hornet” are capable of providing advantages over long-range air combat over Chinese aircraft, since a small percentage of Chinese fighters are now it is equipped with PFAR / AFAR airborne radars, and the three vehicles listed above are all equipped with a PAR radar, and the Rafali MBDA Meteor long-range missiles can also be used. For a very long time, the PRC slowly and surely lost its parity with the group of these states, which ultimately threatened the strategic influence of the Middle Kingdom in the region.

But by the end of 2015, there was a real enlightenment in the situation that would again force the US, Indian and Japanese Navy to look at the Chinese fleet with caution, and the Air Force to think ten times before getting into trouble with the Chinese fighters.

WHAT WILL BECOME A “BONE IN THE THROAT” FOR AN ANTI-CHINESE UNIT?

Looking through information on modern Chinese squadron destroyers URO X. 052C and 052D once on the Internet, I came across a comment from a reader that "American" Arly Burke "will eat them without salt." So, now I can only upset all fans of the American fleet.

In 20 November, information and photographs from the PRC appeared, where in one of the shipyards (Jiangnan or Dalian) a completely new sample transport container completely different from the TPC for anti-aircraft missiles was loaded into UVPU at 052D Ave. HHQ-9. The constructive arrangement of stiffeners on the container is typical of TPK for anti-ship missiles, and not for SAMs (rings are assembled in double groups on both sides of the WPK, in the SAMs the rings are evenly distributed on the body of the WPK, for example, TPK for HQ-9 or 48НХXUMUMЕ missiles). This says only one thing: the Chinese Navy is moving to a new promising anti-ship missile YJ-6, which will give the fighting ships high impact capabilities, which Chinese sailors could only dream of earlier. 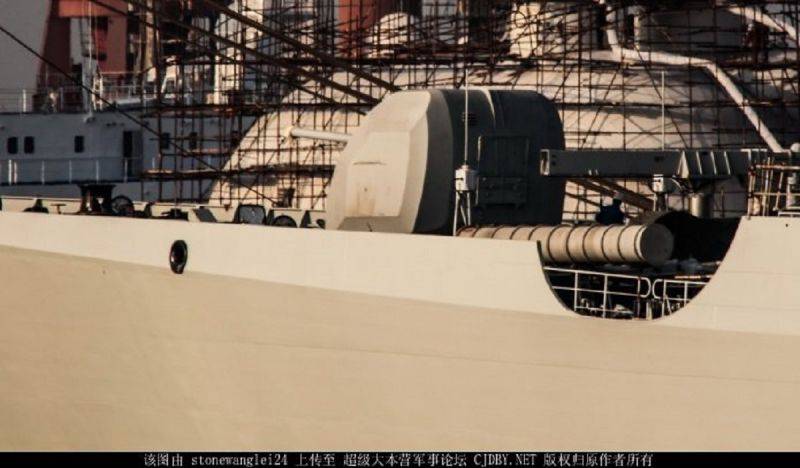 In the photographs presented by the Chinese Internet, one can find clear differences between TPK for ZUR HQ-9 (top photo) and TPK for RCC YJ-18 (bottom photo), the number and arrangement of rings of two TPK are radically different 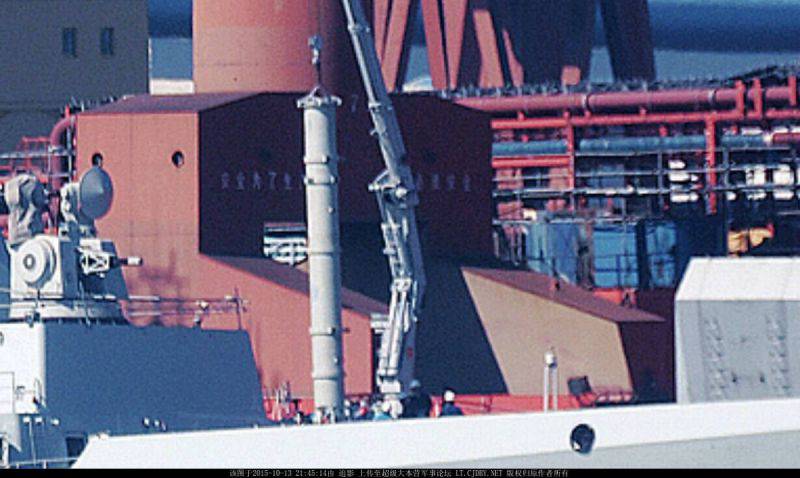 Destroyers of the 052D project, unlike 052С, are equipped with two universal built-in launchers for 32 anti-aircraft missiles or anti-ship missiles each. Ammunition from 64 missiles or anti-ship missiles can be represented completely in any ratio, and therefore the type 052D can successfully perform not only the functions of defense, but also anti-ship tasks. PKR YJ-18 - Chinese analogue of the Russian PKR 3М14Е “Caliber-NK”. The rocket has similar LTH, so on the march of the flight speed can reach 1100 km / h, and when approaching the target - to 3000 km / h; YJ-18 is capable of performing anti-aircraft maneuvers just a few meters from the water surface, where the decimeter AN / SPY-1A MRLS has considerable difficulty tracking targets due to interference and reflections of the S-band from the water surface. 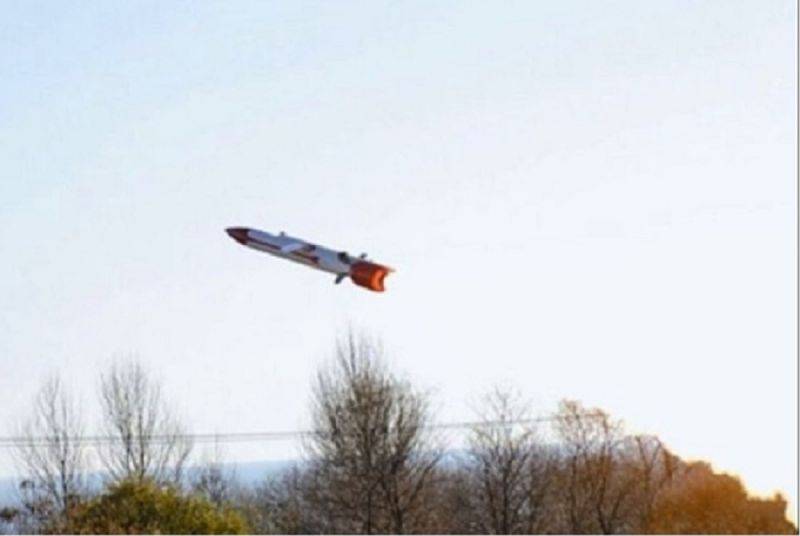 Start-up RCC YJ-18, in the work of a powerful solid-fuel accelerator

In spite of the fact that American EMs of the Arleigh Burke class and Ticonderoga class cruisers have the MK2 UVNX 41, in which 96 and 122 TPK cells, respectively, which can accommodate any number of inconspicuous LRASM anti-ship missiles, the American ships will have There are much less chances to survive in the confrontation with the Chinese fleet, because the YJ-18 strike will be delivered much faster, and it will be much harder to repel it than the Chinese intercept American LRASMs or Harpoons. The only task that now presents to Chinese shipbuilders is the unification of all types of ships, including 052S destroyers, 054 Ave frigates and 056 aprons corvettes, to use YJ-18 anti-ship missiles, which will allow the Chinese KUG to split into smaller connections that can and independently solve marine percussion problems, if the theater is extensive. It is also necessary to increase the naval composition of the PRC Navy, because the most modern EM Ave 052D in the fleet is now only four, and 052 Ave - six units; the pace is not impressive.

Another important event is the contract for the purchase of 24 Su-35С in the configuration of the VKS of the Russian Federation. 6 of the full Su-35С links, equipped with the Irbis-E H035 radar and AL-41Ф1 TRDDF, will be transmitted. Apparently, the aircraft will be used to carry out the most complex and dangerous air operations over the South China Sea and near the borders of Taiwan and the Diaoyutai Archipelago, where the appearance of American F-22A fighter jets is possible. And also will serve as benchmarks for the modernization of the deck fighter J-15S.

Improvement of the Chinese Air Force may occur at a more rapid pace, quite unexpectedly for all Asia-Pacific states and the United States. Internet resource "defensone.com" recently brought an important news about the creation by Chinese engineers of a complex structural stealth material based on varactors - semiconductor diodes installed under the thinnest envelope of capacitors and resistors. The coating belongs to the group of nanomaterials, since its thickness is less than half a millimeter. It is stated that the material is light enough and only slightly reduce the thrust-to-weight ratio of modern Chinese fighters, while the effective dispersion surface indicator will decrease dozens of times.

New radio absorbing material can be used in any structural elements of existing and developed Chinese aircraft and some types of missile weapons, which will greatly reduce the capabilities of modern radar facilities of the US Armed Forces and their allies. Considering that the Su-35C in the Chinese Air Force is already a huge problem for the Japanese and Americans, giving it a radar signature of the image intensifier in 0,7 — 1 and XXXX (2 — 1 and M2 with some weapons on the suspensions) will not even allow the Raptor to conduct equal long-range air combat, as well as pre-detect airborne early warning, on which the air forces of self-defense today make huge bets. As Chinese experts have stated, the newest material exhibits the greatest radio-absorbing qualities against DM (S) - the wave range on which most modern radar detection and targeting functions, including the famous AN / APY-2 and AN / SPY-1 (station data are the basis of the DRLO in the Air Force and Navy of Japan and the USA).

I was frankly annoyed by the reaction to our national tragedy by the representative of the Chinese Foreign Ministry, Hong Lei, who called the Turkish aggression “an accident”, no one expected such tolerance, but this was simply unacceptable and disgusting on the part of China, a strategic and ideological partner), but the delivery of 35С and the support of the Chinese military industrial complex for us now is an expedient and very profitable step, because the PRC today continues to control every step of the naval forces of the main global aggressor in the southern strategic direction, where we can We still do not have a living.

Ctrl Enter
Noticed oshЫbku Highlight text and press. Ctrl + Enter
We are
Malabar-2015 naval exercises will accelerate the global militarization of EurasiaUpdate the Russian Navy. In the gland. Part of 1
Military Reviewin Yandex News
Military Reviewin Google News
39 comments
Information
Dear reader, to leave comments on the publication, you must sign in.