The attack on the Russian bomber was an attempt by the West to seize the military initiative in resolving the Syrian conflict.

November 30 2015
37
The active involvement of Russian aerospace forces in the fight against international terrorist groups operating in Syria did not inspire Western politicians and military strategists. Moreover, the effective actions of our pilots forced the foreign ministers of the pro-American coalition to sit down at the negotiating table in Vienna, together with the foreign ministers of Russia, Iran and China. 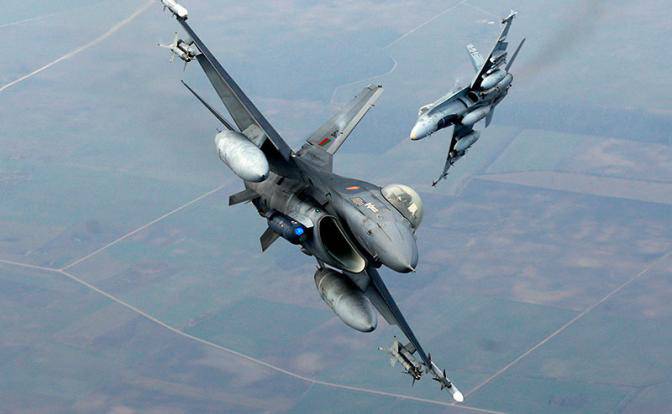 Turkish President pushed into the line of fire

While diplomats checked their lists (who should be bombed and where), evaluated the prospects for a political settlement of the Syrian crisis, the leaders of the North Atlantic Alliance made their direct military conclusion - Russia seized the initiative in the Middle East, and its containment regime becomes again relevant.

This was noticed by the Russian permanent representative to NATO, Alexander Grushko. In early November, he shared his observations on the Russia 24 channel. Soon the military alliance ceased to hide intentions. At the Berlin Security Conference-2015, NATO Deputy Secretary General Alexander Vershbow said for the first time publicly: “After the collapse of the USSR, the West instead of restraining Russia directed efforts to develop friendship and partnership with it and Eastern European countries, but current events require a return to containment policy.”

Vershbow admitted that these approaches resemble the times of the Cold War, but the challenges of the times force the Western allies to "be strong enough that others would fear attacking us." Commander-in-Chief of the NATO Joint Armed Forces in Europe, American General Philippe Breedlove clarified the position that the alliance no longer views Russians as partners.

At the G20 summit in Belek, Turkey, US President Obama already knew about the moods of the American generals. Therefore, at his short meeting with Vladimir Putin, it was not about joint actions against terrorist groups, but about how to avoid military clashes of military pilots of our countries in the skies of Syria. Among other things, we agreed to share information on which echelons, where and when the aircraft will operate.

At the summit, Barack Obama had meetings with his closest allies. A message flashed across the web, as if the Turkish president had asked the American for permission to destroy Russian aircraft in his border area. Obama seems to nod a Turk in response. Like it or not - now it does not matter. Firstly, it is quite obvious that the Turkish authorities had reasons for dissatisfaction with Russia. After all, our military seriously destroyed the plans of the Turks, and even hit their thieves' income. Secondly, subsequent events showed that the actions of the planes of the western coalition in the Turkish border area were not just coordinated, but even joint.

This was noticed by a military expert, an expert in the use of the Military Space Forces, Alexei Leonkov. He noted that the attack on the Su-24М2 of the Russian HQ had been planned in advance by Turkey and its military partners. “Our plane was waited in ambush by Turkish interceptors, a sabotage and reconnaissance group disguised as local Turkomans was located on the ground, the crews of CNN and FOX were delivered in advance ...”, I quote REGNUM.

It’s not so easy to accurately ambush a high-speed target. One aircraft does not provide this maneuver. The Turks had reliable assistants, even a few. As the military expert says, the operation developed as follows: “The US Air Force Boeing E-3 Sentry AWACS plane took off on November 24 from Preveza airbase in Greece. The second E-3A Saudi Air Force took off from the Riyadh airbase. Both aircraft performed one common task - determining the exact location of the aircraft of the Russian Aerospace Force. They chose the "victim". The accuracy of the F-16CJ fighter aircraft was additionally provided by the Patriot US air defense systems deployed in Turkey, or rather their multifunctional radar. "

This was confirmed on Friday by the commander-in-chief of the Russian Aerospace Force Viktor Bondarev. According to him, “the way the aircraft F-16C exits into the zone of permitted launches, not following the chase curve, indicates that the fighter is pointing from a ground control point”.

Alexey Leonkov set forth in some detail the development of this multi-vector operation to destroy the Russian bomber. It was based on information that, by agreement of the presidents of the two countries, was shared by our military with the Americans.

Washington was informed in advance about “where, when and at what levels our pilots will work. The American side, which heads the coalition, which includes Turkey, knew about the place and time of our aircraft, and it was there that we received a blow at that time, ”Vladimir Putin admitted last Thursday at a joint press conference with the French president.

Instead of fighting terrorists, Americans fight for their leadership

In short, the operation was pre-planned and agreed. It was not by chance that after its completion, the Turkish president turned to allies for support and asked for an emergency meeting of NATO ambassadors to be convened. This meeting was to demonstrate the determination and unity of the North Atlantic alliance to Russia. Did not work out.

The reaction of our leaders was unexpected for NATO politicians. Instead of blaming and repenting, Moscow has utterly harshly defined its position - it is ready to sever relations with Turkey and punish her for the death of the aircraft and the Russian military, using all the possibilities of the Ministry of Defense.

In addition, French President Francois Hollande made a splinter among Western politicians. Demoralized by the terrorist attacks in Paris, he moved around the world, gathering a broad coalition to fight terrorist groups in the Middle East.

Admittedly, the mission of Hollande was initially a failure. First of all, because the Paris tragedy is less connected with the Middle East than with homegrown terrorists, of whom a dime a dozen bred in Europe. After the November tragedy, French investigators found the nests of terrorists in the Paris quarter of Saint-Denis, in the émigré district of Brussels, Molenbeek and even in the capital’s airports.

According to police prefect Philippe Riffaud, only at Charles de Gaulle airport, 57 workers were fired on suspicion of radical views. Here, after the introduction of the state of emergency in France, searches were carried out, copies of radical Islamist publications were found in workers' lockers. Other examples of the fact that the main terrorist threat to the Europeans are, above all, local migrants, more precisely, their children - in the second and even third generations have been revealed.

The French president decided to fight terrorism, gathering the leading nations of the planet under a single banner. And this was his second mistake. The fact is that the initiative in resolving the Middle East crisis and the destruction of terrorist groups has firmly passed to Russia. For a month and a half, its military did more than a coalition of sixty states headed by America in the two preceding years.

The world appreciated it. Today, the authority of the United States suffered a painful blow. Therefore, in Washington, the French President was met very coolly. To integrate with number two in a coalition with Russian Americans is somehow out of hand. In addition, the innocent Hollande did not take into account that the United States had already moved from partner relations to the containment regime of Russia - in other words, to confrontation.

Retired General John Allen, appointed by the White House as coordinator for US interaction with other countries in the fight against the IG grouping, just before the start of the Russian VKS operation in Latakia, told CNN on television that a confrontation between the US and the Russian Federation was possible in Syria.

It was substantively designated when the first bombs from Russian aircraft still did not fall on the heads of terrorists. The representative of the US State Department, Admiral John Kirby, informed the local media that the purpose of Russia in Syria is not to fight the “Islamic State”, but to destroy the “moderate opposition”.

After a week of work of our aircraft in the Syrian sky, the actions of the western coalition became systemic and coordinated. Turkish Foreign Ministry 7 October issued a statement, drawn up on behalf of the United States, Britain, France, Germany, Saudi Arabia and Qatar, in which Russia was called to stop strikes against moderate Syrian opposition objects and focus on fighting the IG

The reason for such informational pressure was explained by the former US representative to the UN, John Bolton. The retired diplomat told Voice of America radio station listeners: “The overall goal of Vladimir Putin is that Russia replace the United States as the main external force in the Middle East.” The answer from the American side, in Bolton’s opinion, should be to move away from Obama’s vague Middle Eastern policy: “We need to develop a new strategy, possibly involving the creation of a new Sunni state as an alternative to ISIL and breaking the Russian-Iranian axis.”

Against such a background, the French president, who signed the October statement condemning Russia's actions, came to Vladimir Putin to create a broad coalition in Syria. Admittedly, in this failed mission, the parties were able to save face - they agreed to exchange intelligence information. It was even possible to bring the positions together somewhat.

The topic is actively entered the Americans. They felt that the government forces of Syria could perform this work, and the Western coalition would remain out of work again. As the New York-based business newspaper The Wall Street Journal reported on Friday with reference to its sources in the State Department, "The United States is putting pressure on Turkey to deploy an additional few thousand soldiers along the border with Syria." This host should block the militants in Syrian territory.

US officials say that the additional contingent on the Turkish border, which will include infantry and artillery, can effectively block the key transit routes of Islamic terrorists and stop the flow of foreign fighters to Europe. “The rules of the game have changed,” the Wall Street Journal quoted the representative of the US administration. “There is a threat of an international scale, it comes from Syria and passes through the territory of Turkey.” The Turkish authorities understood the last message in their own way: they again started talking not only about closing the border, but also about the security zone in Syrian territory. Once again, the Turks confirmed their intentions to control the land where the Turkomans close to them live.

So instead of cooperation and interaction within the framework of the wide coalition proposed by Hollande, a new hotbed of contention is emerging today. There is another attempt to seize the military initiative in the Middle East. She definitely won't add peace and harmony ...

Ctrl Enter
Noticed oshЫbku Highlight text and press. Ctrl + Enter
We are
The attack on the Russian aircraft and the political situation in TurkeyStrangulation: the context, conduct and consequences of the American naval blockade of China
Military Reviewin Yandex News
Military Reviewin Google News
37 comments
Information
Dear reader, to leave comments on the publication, you must to register.