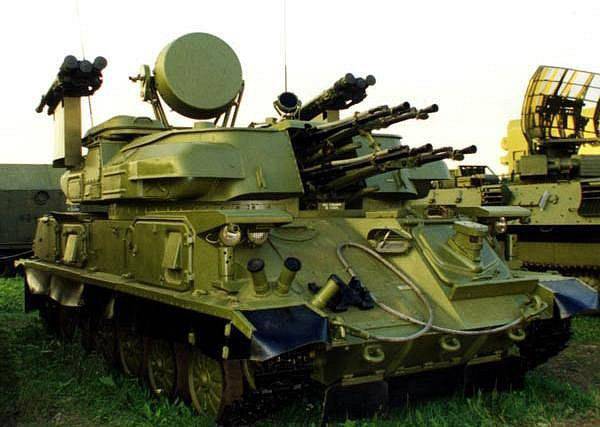 Once, in the distant cadet times, I was literally stunned by the work of the then new anti-aircraft gun. Moreover, this installation did not work on airplanes or helicopters, but on the old T-34 building at our training ground. Some kind of hybrid tank and ZSU. At first, we did not pay attention to these four trunks. Caliber such that ... One word - anti-aircraft gun. Though stuffed for that time.

Experts, probably, already understood that today they will speak about the good old "Shilka" and about her sister "Tunguska". It would seem that there may be interesting in these, though good, but long-obsolete installations. We also have "shell" and their ilk. Oh, we are protected by modern air defense of any range.

Frankly, and I thought so. Not yet visited the site of the Ulyanovsk Mechanical Plant. Still, it’s good that the Soviet and then Russian engineering thought did not receive an engineer like me. But she could. So, in Ulyanovsk, engineers are real. And they think like engineers. And to youthful impressions are not as sweet memories, but as an incentive to action.

I recall some information about the legendary "Shilka". This 23-mm quad ZSU refers to short-range air defense weapons. It is designed for air defense of combat formations of troops, columns on the march, stationary objects and railway trains from an air enemy attack at altitudes up to 1500 m and distances up to 2500 m. ZSU can be used to destroy mobile ground and surface targets at ranges up to 2000 m, and also targets dropped by parachutes.

Shilka in many ways weapon legendary. As many real wars as it went in its various modifications, probably not a single modern short-range air defense system. Yes, and so many victories no one. The power and simplicity combined into a single whole forced the pilots and aircraft designers to seriously engage in systems to counter this weapon.

It is clear that such systems were created. Enough effective, I must admit. And the pilots have learned new ways to work under the cover of “Shilkami”. And gradually, with the advent of the latest anti-systems, the opinion appeared that the air defense of the "battlefield" was not needed. Why work on an already attacking enemy, if it is possible to prevent an attack? It seems logical.

But logic is not always an assistant in military affairs. Moreover, many battles won just contrary to logic. Approximately the same happened with our "Shilka". 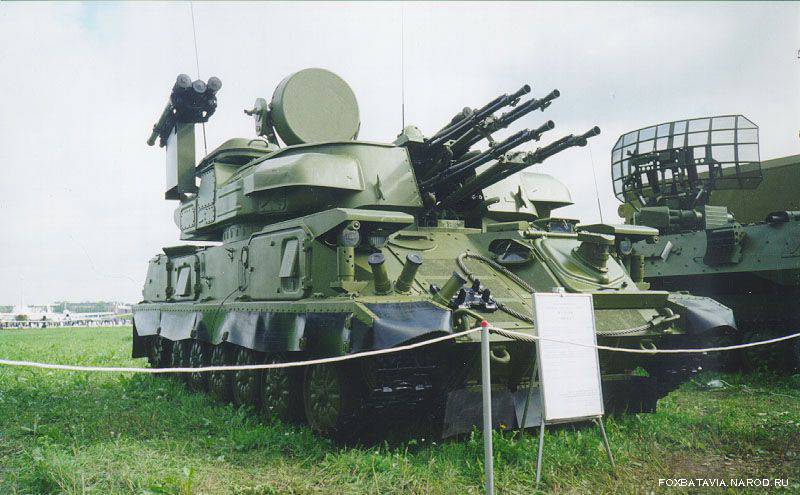 Modern warfare is fought using many flying objects. Starting from rockets and ending with small, one-time reconnaissance drones. Today, we almost see live strikes on the enemy. The drones allow you to see everything. So, the task is to destroy these small but very dangerous enemies. And the destruction of the rapid and effective. It was here that the machine checked over the years of wars and exercises was useful.

And the engineers of the Ulyanovsk plant carried out its modernization. Now "Shilka" has the best tactical and technical characteristics compared with previous versions. A more advanced fire control system has been developed and implemented:

- introduced the equipment for receiving and transmitting data for the exchange of information ZSU with a higher command post;
- the method of processing secondary information was changed from analog to digital;
- the radar station was replaced by a new radar of the same frequency range (all equipment, except for the transmitter, was transferred to the solid-state element base, and the noise protection system and the rangefinder were converted to a digital method of information processing);
- instead of the analog computing instrument, the instrument and the sighting transducer of coordinates, a high-speed digital memory system with high-capacity memory is used, made on a modern mass-produced digital computer;

The built-in simulator mode provides the ability to effectively train radar operators without using aviation. The introduction into the composition of the ZSU “Shilka” a set of equipment for firing anti-aircraft missiles of the “Igla” type allowed to increase the range of destruction of targets up to 5 km. 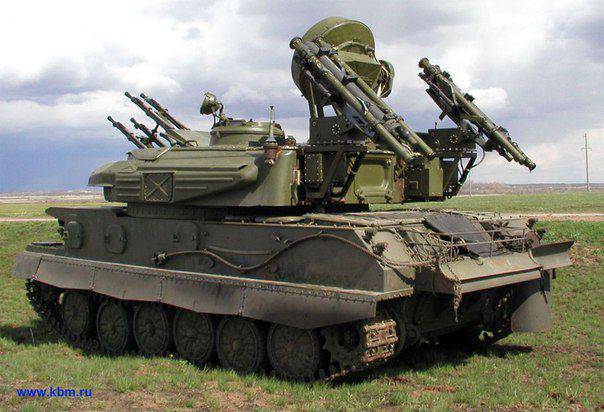 All this greatly increased the effectiveness of the ZSU in the fight against small targets. The same история happened with another "old woman".

Developed in the 70-ies of the XX century, the ZSU “Tunguska” is intended for detecting, identifying nationality and destroying airplanes, helicopters (including those that are stranded and suddenly appearing), as well as other low-flying targets, including those dropped on parachutes movement, from a standstill and from short stops. ZSU provides destruction of ground and surface targets. 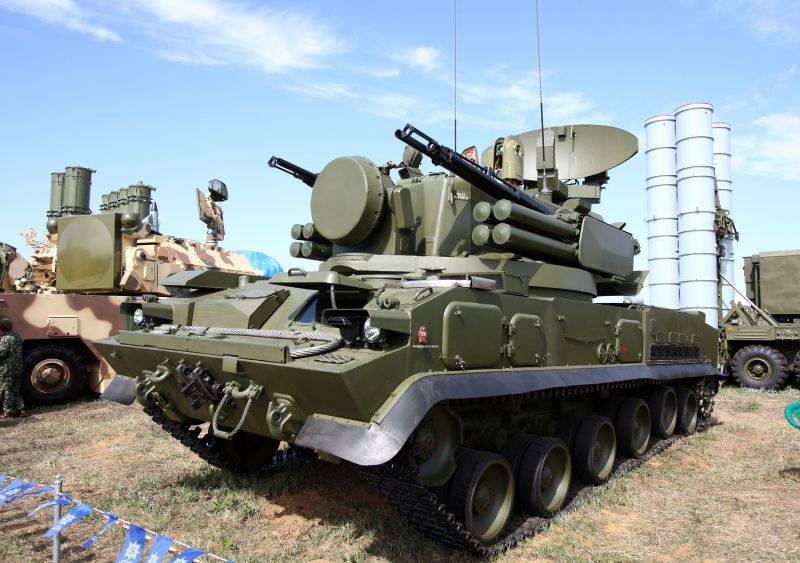 However, the "Tunguska" had a number of shortcomings that did not allow to fully realize its potential. Many years of experience in operating the ZSU 2C6 and 2C6М modifications have shown that they have insufficient noise immunity when firing rocket armament at targets equipped with optical interference. In addition, they are not equipped with automated equipment for receiving and implementing target designation from a higher command post, which reduces the effectiveness of the combat use of the ZSU battery for massive enemy raids.

Ulyanovsk engineers and designers have found ways to improve system performance. Moreover, this was achieved in several directions at once. Thus, a new missile with a pulsed optical responder was used and the missile control equipment was modernized, which made it possible to significantly increase the noise immunity from optical interference and increase the probability of hitting targets operating under cover of such interference. Equipping the missile with a radar non-contact fuse and increasing the operating time of the missile elements made it possible to increase the range of targets hit with a missile from 8000 to 10000 m.

The equipment for automated reception and processing of external target designation, which is interfaced with a battery command center over the radio channel, has been introduced in the ZSU. This made it possible from the command post to automatically distribute targets between the battery's ZSU (it includes six ZSUs), which significantly increases the effectiveness of the combat use of the ZSU with a massive raid of targets. Simultaneously with the ZSU, information about actions on the target is transmitted to the command post.

A gunner’s “unloading” system was introduced that automatically, speedy, two-coordinate target tracking with an optical sight, which greatly simplified the process of semi-automatic tracking while simultaneously increasing the tracking accuracy and reducing the effectiveness of the missile’s combat readiness.

But that's not all. Design thought went much further.

Television and thermal imaging channels with automatic tracking were introduced into the ZSU, which ensures passive target tracking and all-day use of rocket weapons. In a modernized digital computing system, a new calculator is used, which has high speed and large memory capacity, which made it possible to increase the frequency of solving problems and reduce calculation errors. At the same time, the functional capabilities of the CWS were expanded in solving combat and control tasks.

The radar system has been upgraded to ensure the reception and implementation of external target designation, the gunner’s “unloading” system operation, equipment reliability has been improved, and technical and operational characteristics have been improved. The target detection zone has been increased in height to 6000 m (instead of 3500 m), which made it possible to increase the zone of target firing with rocket weapons in height to 6000 m. A number of other systems that improve the tactical, technical and operational characteristics of ZSU have been upgraded. 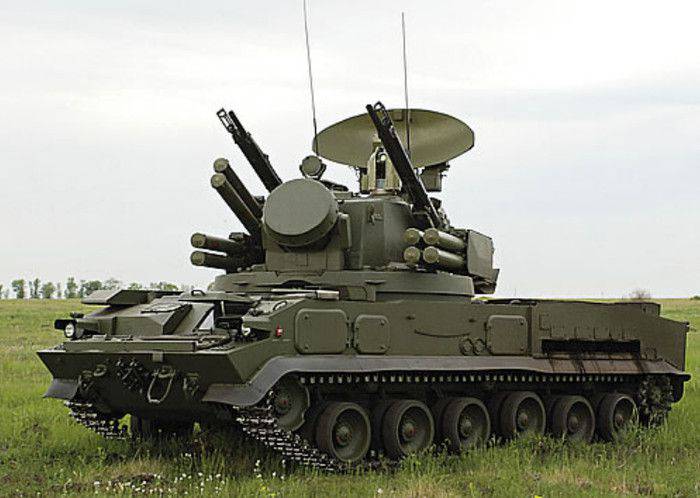 It is clear that any weapon is intended primarily to perform a certain kind of tasks. A weapon is born, modernized, lives for some time, and then replaced by another. More effective. But this example of modernization shows us that sometimes we reject the tested samples too early for scrap. And the most successful samples can be upgraded many times. And it will only benefit our army.

And I want to finish the article with a simple phrase. Providing combat work on the move and from a place, the ZSU Tungusk and Shilka, by the effectiveness of protecting army units and stationary objects covered by them from low-altitude air attack weapons, are unparalleled in the world today.

And who said there - the old horse does not plow deeply? Not only plowing, but also paving the furrow perfectly. I would like to congratulate the designers, engineers and workers of the Ulyanovsk Mechanical Plant on the victory. It is with a victory. This is the only way to perceive the revival of the old new systems. Systems that have been and remain the best in the world.

Ctrl Enter
Noticed oshЫbku Highlight text and press. Ctrl + Enter
We are
ZSU on the basis of tanksZSU-37-2 "Yenisei". Not a "Shilka" single
Military Reviewin Yandex News
Military Reviewin Google News
61 comment
Information
Dear reader, to leave comments on the publication, you must sign in.