Tricky comments. Why does Ukraine need a blockade of the Crimean coast?

December 1 2015
57
Our “friends” in the 404 country cannot sleep peacefully when they do not read daily reports about their victories in the construction of an independent state. This is a special case of addiction, when a new “dozniak” is constantly needed for the proper functioning of the system. And this is the last time a problem. 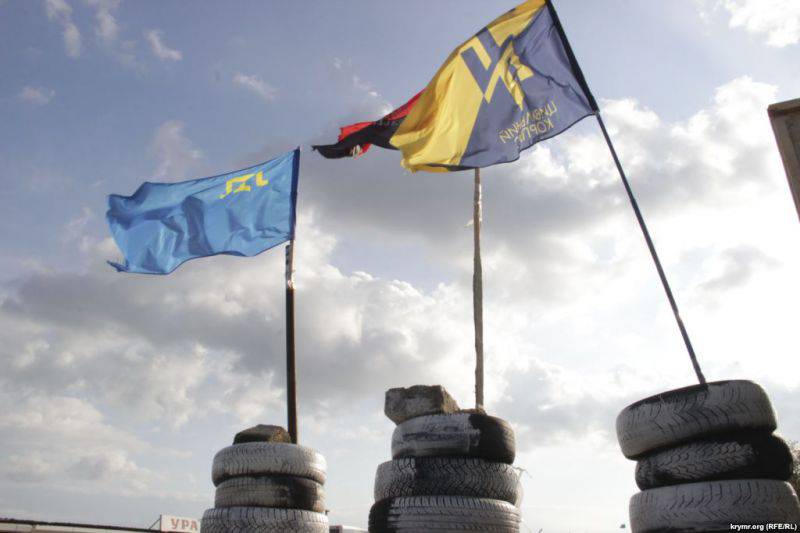 Turned off the light in the Crimea ... Again, not a victory, but a crime. Even the Germans are already openly writing about it. Products do not deliver. Again, not a victory. But Svidomo need to somehow support. Especially now. Payments are these. The US hryvnia has already passed on the black market for 26. Prices are rising. By the New Year holidays, train tickets will also become more expensive. Grannies in the loop climb from the inability to honestly pay the bills and at the same time at least something is.

In this situation, nothing remains but to declare a blockade of the Crimea also from the sea. Maybe even this in the eyes of the mythical world community will be a victory. What, in fact, did the dying ukronachalniki. The most peremoga peremoga stories Ukrainian Navy!

Of course, the Ukrainian Navy could not block the Crimea. Just because the Ukrainian admirals just do not have enough ships. Just physically is not enough. After all, at least one must raise the admiral standard. To thrill foes. And the admirals more than all that somehow keeps afloat. Even the main submariner does not want to go to his submarine fleet. Coward. Afraid that unauthorized dive. Forever and ever. The entire submarine fleet.

Thanks to the border guards. More precisely, their naval forces. It was the frontier service of Ukraine that stated that it was starting the blockade. Now armed with the most modern weapons motorboats and boats will block all "half-dead" Russian frigates, submarines and rocket boats. Imagine, is any cargo ship to the Crimea, and a number of times ... a missile strategic rubber boat. And three or four cyborg border guards. Frigates scatter on the nearest beaches. Submarines lie on the bottom and are silent in the sand. And this trifle, which is capable of squeezing it into some “Caliber” for some couple of thousand kilometers, simply raises white flags. Beauty!

True, according to rumors, zradniki appeared among the border guards. They do not want to swim far from the coast. And after all, what non-patriotic excuse came up with! We, like, do not know how to swim. And if any slope-tailing train specially prepared for sabotage can still pierce the side of the “ship” ... It's terrible to think.

I had to personally connect to the president. Fortunately, today there is someone to talk about this. The Turkish President also considers today. What and how much now will not go and will not float to Russia. Now they agree. Like a blockade coalition create. Maybe it will. The Turks are now too much to lose. More precisely, it seems that there is still something, but it is difficult to say how much the Russians will give up in the self-denial of Turkish resorts and goods. And this very word “bye” as there is an indefinite one at all.

Yes, and not going to block the Russian ships going to the Crimea with the goods. Blocking going zradnikov among Ukrainians. Well, the revolution can not knock out of the Ukrainian heads zhlobstvo. All for sale. So Ukrainian businessmen are delivering goods from the Sea Square. Barges, boats, everything that can stay on the water.

Now in the ranks of those who are blocking border crossings in the Crimea and those who blew up power lines, there is an active agitation. It is necessary for pseudokrymsky Tatars and PS activists to take part. Looking for those who know how to swim and agree to work on the oars.

The fact is that even after all the requests and persuasion Poroshenko did not give Jamilev a single boat. You can not squander the fleet. So, given the great history of the Ukrainians, it is necessary to remember the Cossacks. Build Cossack canoes. Russia and Crimeans in horror. Cossack prow, he's universal. Ukrainian historians have long proved it. Floats in the normal position - warship. Rolled over - a submarine ... True, the crew of submarine Cossack boats is an order of magnitude smaller than that of surface ships. But these are subjective reasons. Cossacks, too, did not know how to swim.

The introduction of the blockade in order to love you. Just remembering besieged Leningrad. Something there for the 900 days of the blockade was not born loved Germany. On the contrary, Leningrad citizens became a symbol of resilience. And the soldiers from this city were distinguished by courage and courage. Even now, the few who still live throughout Russia say with pride: "I survived the blockade."

After what happened in these few days in the Crimea, any local resident can also say the same. Proudly. For myself, for my family, for my land.

And the blockade ... Yes, I will not be me if independent businessmen do not find another way to deliver goods to Russia. What a patriot you do not be, anyway you ... In short, you want to eat. And to make money on this very “food” today can only be trading with Russia.

Sala Ukraine! Especially the most Ukrainian patriots from among the supporters of Dzhemilev and Chubarov.

Ctrl Enter
Noticed oshЫbku Highlight text and press. Ctrl + Enter
We are
Tricky comments. Again the old American record!Results of the week. “Why is the war going on? Do they not read newspapers? ”
Military Reviewin Yandex News
Military Reviewin Google News
57 comments
Information
Dear reader, to leave comments on the publication, you must sign in.