November 28 2015
233
The conflict between Turkey and Russia (as if due to the downed Su-24) is rapidly expanding, and now Moscow is preparing a package of economic sanctions against Erdogan, starting with the ban on importing harmful products and ending with the ban on tourist trips. 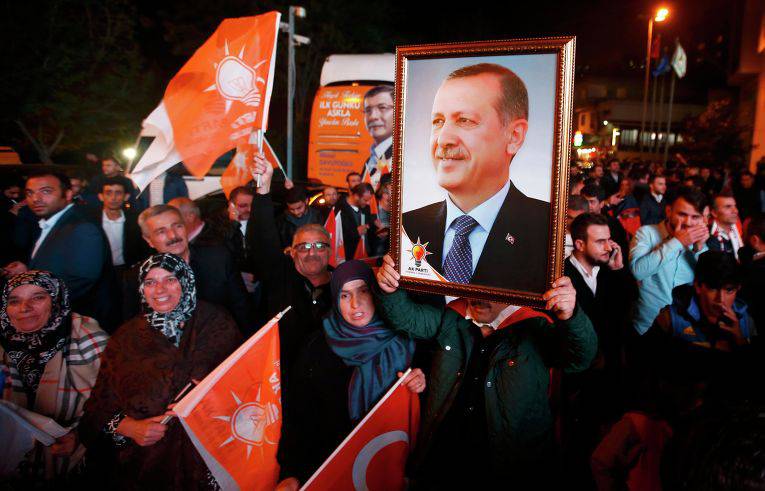 I involuntarily recall a very similar situation when in the summer of 2010 this same Erdogan was furious that Israeli special forces attacked the Turkish flotilla in the Gaza Strip (Mavi-Marmara raid on Wikipedia), and 9 Turkish Islamists were killed in a shootout. By the way, the same Islamist organization IHH, whose convoy with weapons Russian bombing for ISIS aviation last night.

In 2010, Turkey was so outraged that some small Israel took and stopped their imperial ambitions, not being afraid to stop the Islamists who violated the Israeli border, which immediately expelled the Israeli ambassador from Ankara, in one fell swoop ordered to stop all types of economic cooperation, stop flights and enter visas for Israelis.

Readers living in Turkey will not let me lie that this country has been raging the whole 2010 year. A wave of anti-Israeli demonstrations swept through Turkish cities, leaders called for Israel to declare war and return the greatness of the Ottoman Empire. In parallel, the Turkish court declared the entire military and political leadership of Israel war criminals. Turkish demonstrators in Istanbul carried fascist flags and shouted "Hitler was right!"

First, Russia is a much more serious player on the world stage than Israel. Secondly, the trade turnover between Russia and Turkey is five times more than between Turkey and Israel. Third, the attitude of the “Turkish street” towards Israel was initially quite negative due to the growing Islamization of Turkey. If in Russia the Turks see a strong neighbor, whom they dislike, but are forced to reckon with it, then Israel for them is not clear where the “education” which came from, which surprisingly managed to quickly turn into a regional superpower with a nuclear arsenal.

Thus, the Turks behaved too emotionally from the very beginning, underestimated Israel and the pro-Israel lobby in Europe and the USA.

Erdogan stopped all military cooperation between Israel and Turkey, and yet it was Israel that was one of the three main suppliers of weapons for the Turkish army, especially on equipment with modern technologies. Interrupting all contracts, the Turkish budget was short of one and a half billion (!) Dollars already paid in advance to Israeli military factories. In addition, maintenance of the already supplied equipment was discontinued, due to which hundreds of Turkish combat aircraft undergoing modernization turned out to be inoperative and the Turks hastily began to look for alternative partners, losing hundreds of millions again and again. By the way, all these senseless wastes imputed to Erdogan his opponents and the opposition.

Erdogan has banned Turkish travel to Israel, but the fact is that no Turkish tourism existed in Israel even before the conflict. Of the modest 10-15 thousands of Turks who visited Israel annually, 90% were businessmen, not tourists. As for the Israelis, they themselves stopped traveling to Turkey. The Israeli authorities did not cancel any tours, did not cancel the flights. They simply warned that there is a risk of Islamic terrorism in Turkey. And instantly, Israeli tourism to Turkey stopped on its own, because the Israelis did not want to go to a country where it was dangerous and where they were not expected.

All decisions of the Turkish courts were absolutely meaningless and not valid outside of Turkey itself, since Interpol is not authorized to deal with the leaders of the UN member states. The courts are sluggishly drawn to this day and the Turks are suing themselves, since there are no defendants or any legal basis for their prosecution. This is tantamount to, as if an aunt of the peace of some 147 plot Elektrougli Moscow region found Barack Obama guilty of the troubles of Russia.

Erdogan absolutely spontaneously even began to actively make friends with the leader of Syria, Bashar Assad, promising the latter all possible assistance in the fight against Israel. And by the way, everything between Turkey and Syria was not easy even in the best years because of the perception of the Syrians by the Turks as a breakaway region of the Ottoman Empire. However, acting on the principle of the enemy of my enemy - my friend, Erdogan ordered to cancel visas for Syrians to Turkey.

And a year has not passed since Turkey and Syria began to “make friends” against Israel, and Erdogan has already quarreled with Assad. There could not be a real union, if only because of mutual territorial claims and the Kurdish question. But Erdogan got millions of Syrian refugees who, taking advantage of free entry, rushed to Turkey, fleeing from the war.

If the conflict between Israel and Turkey were limited to “parochial” disassembly of two neighbors at the level of “oh, you are so - then I will forbid your chicken”, then the Americans would not intervene. A bit small. But in a situation where a project called ISIS got out of control of its creators, the conflict between two key players in the Middle East created a lot of problems. Each side bent its line and defended its own interests, creating problems for each other and the Americans. Israel was supported by some Syrian factions, Turkey by others, Saudi Arabia and Qatar by third parties. Then came Iran, whose presence in the Syrian war is not in the interests of either side.

The Americans and Europe put pressure on both sides, both on Turkey and on Israel. The general idea is that the conflict between the two countries harms the common position of the West on Syria. Israel was demanded to apologize to Turkey for the death of its citizens on that ship with the Islamists, and the Turks were obliged to return relations between the countries as they were before the conflict. As a result, Netanyahu made a lengthy statement that “... Israel regrets that Turkish citizens died and, for humanitarian reasons, will pay compensation to their families,” while not recognizing Israel’s guilt for their deaths.

Jews deceived us! - Erdogan exclaimed after two years of dismal negotiations with the Israeli delegation on the amount of compensation to the Turkish Islamists who died on that ship in 2010 year. After dozens (!) Of meetings and conferences, it was not agreed how much Israel would pay the Turks. Figures leaked to the press that the Turks wanted 5 million dollars for each family, and Israel was ready to pay only 100 thousand. Oh funny, is not it? East market. Then it turned out that the negotiators from the Israeli side were not at all authorized to decide anything. Several times people changed, amounts, terms. Now it's the end of 2015 of the year, and Israel has not paid a cent to the Turks. Well, who would doubt.

Formally, this was explained by the fact that the Turks first wanted money, and then were ready to go to the world. And the Israelis, who in the same measure did not believe Erdogan’s single word (“love and trust” are mutual here) dragged time. Many Turkish families, meanwhile, who watched the negotiations, were offended and refused to take money from Israel, as stated in the Turkish media, they say, stop the humiliating bargaining on our behalf with the enemy that we disdain to take money from them. The position of the families was held by many political parties in Turkey, who accused Erdogan of humiliating for Turkey a bargain about ridiculous amounts by state standards, while Israel did not even admit its guilt, and as a result is only ready to render incomprehensible humanitarian assistance to "poor Turks".

On the other hand, both the United States and its own opposition put pressure on Erdogan. The conflict with Israel had to somehow stop, but without losing face. A lot of words were said, a lot of recriminations were made, a lot of money was lost. Someone had to answer for all this.

The Turks thought and decided - and we will freeze the conflict! For the past six months, nothing has been heard about the courts against the leaders of Israel, or about compensation. No visas were entered into the Israelis by the Turks, the air traffic even expanded (now not only Turkish but Pegasus flies to Israel), trade increased from 2,6 billion dollars to 2009 year, that is, to conflict, to 5,7 billion in 2014 year. The Israeli ambassador somehow imperceptibly materialized in Ankara again, and the Turkish - in Tel Aviv. No apology has followed, compensation has sunk into oblivion.

Ctrl Enter
Noticed oshЫbku Highlight text and press. Ctrl + Enter
We are
About Stalin and KhrushchevWhat you didn't want to know about England
Military Reviewin Yandex News
Military Reviewin Google News
233 comments
Information
Dear reader, to leave comments on the publication, you must to register.