November 27 2015
196
The details of the attack by the Turkish Air Force of the Russian Su-24, as a result of which the aircraft of the Russian Aerospace Force was shot down, was presented by Commander-in-Chief of the Air Force of Russia Viktor Bondarev. According to Viktor Bondarev, the crew of the Su-24M with tail number 83 and the crew of the second front-line bomber in 9: 15 (MSK) received a combat mission to strike in the area of ​​Kepir-Mortlu-Zakhia in northern Syria. The plane with the crew in the person of commander Oleg Peshkov and navigator Konstantin Murakhtin took off, carrying the OFAB-4-250 270.


We present the full text of the statement by Viktor Bondarev, published on the official website Ministry of Defense of the Russian Federation:

Crews were assigned a duty zone in the air in the area of ​​the settlement. Maaret en Nuuman at echelons 5800 and 5650, respectively.
Take off from the airfield Hmeimim produced in 9 hours 42 minutes.

In 9 hours 52 minutes Su-24M entered and 34 minutes were in the detection zone of the Turkish Air Force's radar equipment.

20 minutes after the crew’s duty in the airborne zone, a command was received from the command post of the Khmeimim airbase to destroy the militants in a given area.

In the process of attacking the target, located at a distance of 5,5 km south of the Turkish state border, in 10 hours 24 minutes the crew of Lieutenant Colonel O. Peshkova completed the bombing, after which the F-16 Turkish air force took off from an air-to-air missile with an F-8 Turkish military aircraft that took off from the XNUMX airfield Avb, Diyarbakır, located in Turkey.

When analyzing the video recording of the air situation indicator, received from the command post of the Syrian Air Force and Air Defense, a mark of the air target was detected, flying at a speed of 810 km / h from Turkey in the direction of the state border with a course of 190 degrees.

After the Turkish fighter came close to the Su-24M aircraft at a distance equal to the missile launch range - 5-7 km, which indicates that the F-16 aircraft was over the SAR territory, the fighter performed a sharp maneuver to the right with a decline and disappeared from the air situation indicator screen.

In accordance with the materials of the objective control of air defense systems, the Turkish aircraft was in Syrian airspace 40 sec and plunged into its territory on 2 km, and the Russian bomber did not violate the state border of Turkey.

The launch of the rocket confirms the crew of the leading aircraft. After the combat use of the target and turning to the left for the course of 130 degrees, he observed a torch and a plume of white smoke to his left, which he reported to the head of the flight.

In 10 hours 25 minutes, the head of flights recorded the disappearance of the radar mark on the circular view indicator from the Su-24м aircraft. On his further inquiries and inquiries of the crew of the aircraft leading lieutenant colonel O. Peshkov. did not answer.

The required flight time of the F-16c from the airbase (Diyarbakir) from the ground position to the missile launch site is 46 minutes (of which 15 minutes are the preparation and take-off of the aircraft, 31 minute is the flight time to the launch line).

Thus, interception of the Su-24m aircraft from the ground position on the ground from the Diyarbakyr airfield is impossible, since the required flight time exceeds the minimum time to attack the target for 12 minutes.

At the same time, the results of the objective monitoring of the Syrian radar confirm that two F-16c are in the air zone from 9 hours 11 minutes to 10 hours 26 minutes during 1 hours 15 minutes at 2400 meters, which means that fighters are ready to take action ambush in the air over the territory of Turkey. 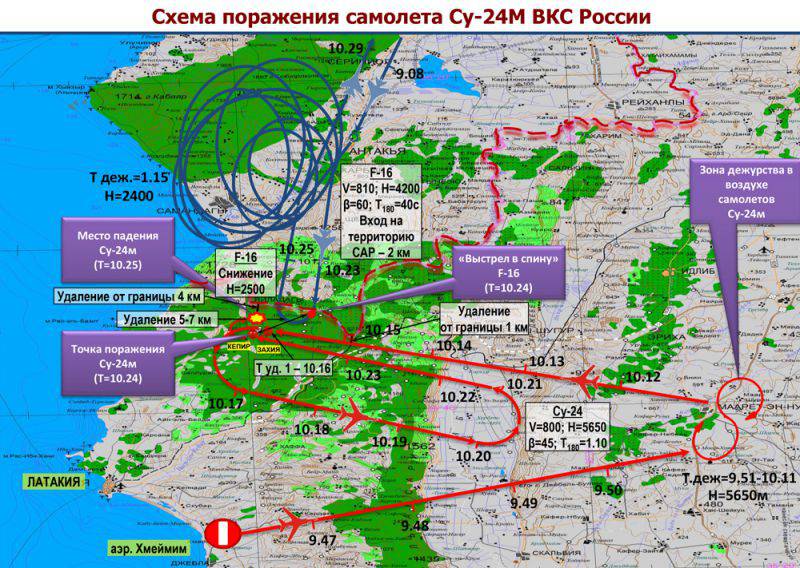 It should be noted that the termination of the maneuvering of the fighter aircraft in the zone of duty and the beginning of the rapid exit to the pre-launch point occurred in 1 minutes. 40 seconds to the maximum approach of the Su-24 aircraft to the Syrian-Turkish border. The way the F-16c aircraft emerges into the zone of permitted launches (not along the chase curve) indicates that the fighter is pointing from a ground control point.

The actions of the Turkish aircraft after the launch of missiles over the territory of Syria - a forced turn with a loss of height and departure below the lower boundary of the detection of air defense systems - also speaks of the perfidious and planned nature of the crew’s actions.

At the same time, the objective control of the Khmeimim airfield and the lead aircraft did not indicate a single request by the crew of the Turkish aircraft to our pilots at the previously agreed frequency.

The readiness of the Turkish media to cover the incident is amazing.

The air-to-air missile was hit by the Turkish Air Force's F-16 pilot in 10 hours 24 minutes and after 1,5 hours the video with the plane’s crash was posted on YouTube by a Turkish private broadcaster.

Perspective shooting allows you to determine its possible location. It is located on the territory controlled by radical terrorist groups of immigrants from the North Caucasus and the former Soviet republics.

The operator knew the time and place from which it would be possible to make exclusive shots.

The operational appearance of a gang of militants at the landing site and the publication of a video clip of this incident on the Internet in an hour and a half testify to the advance notice of terrorists about the upcoming provocation for its video documentation and posting of the footage on social networks of the Internet.

All these facts clearly indicate the advance preparation for the destruction of the aircraft and the informational coverage of these actions with the use of the Turkish Air Force, illegal armed groups, and Turkish news agencies, with the active support of the media.

In accordance with these agreements, information was sent in advance from the control point of the Russian Air Force at the Khmeimim airbase to representatives of the US Air Force indicating the areas of use of our Su-24M bomber pair and the occupied echelons.

Therefore, the statements of various officials of Turkey that they did not know the ownership of our aircraft are puzzling.
Moreover, the Turkish military leadership grossly violated all international laws on the procedure for protecting the state border in airspace.

I would also like to especially draw your attention to the fact that after the tragedy, there was no apology from the Turkish side, nor offers of assistance in finding and evacuating the crew. 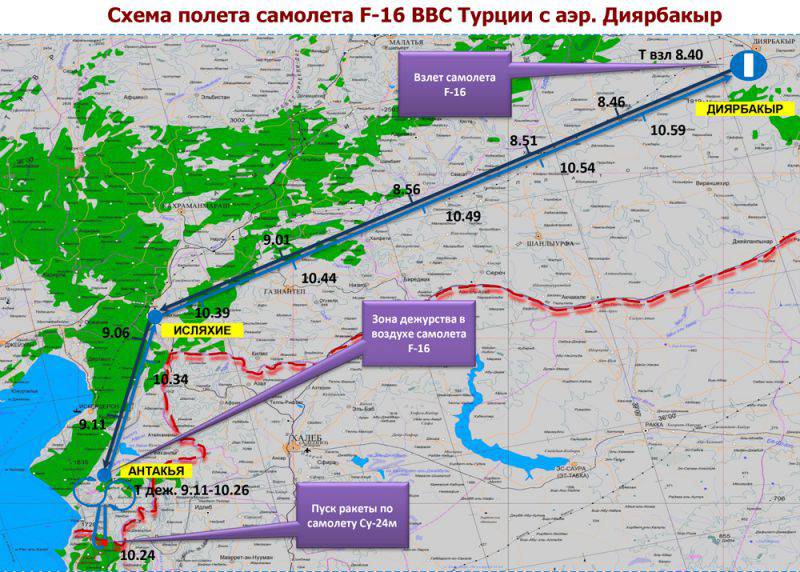 Colonel-General Viktor Bondarev, Commander-in-Chief of the Russian Space Forces of the Russian Federation, expressed his gratitude to all those who participated in the search and rescue operation, which resulted in the successful return of navigator Konstantin Murakhtin to the airbase Hmeimim.

In the final part of the briefing, Viktor Bondarev expressed condolences to the families and friends of the dead Russian servicemen: Lieutenant Colonel Oleg Peshkov and Private Alexander Pozychnich.

Victor Bondarev:
In conclusion, I want to say that I am proud of the pilots of the Aerospace Forces, the technicians, the commanders, the supporting personnel who perform combat missions in the framework of the fight against international terrorism in Syria.

And I want to express my deepest condolences to the families and friends of Lieutenant Colonel Oleg Peshkov and Private Alexander Pozychnich, who died saving our crew.

We will not abandon the family of our comrades and will provide them with all necessary assistance.

Ctrl Enter
Noticed oshЫbku Highlight text and press. Ctrl + Enter
We are
The new concept of the Russian Aerospace Force of the Russian Federation will include a radical response to the Turkish aggression against the Su-24MThe situation in the south-east of Ukraine. Chronicle of events. 3 May
Military Reviewin Yandex News
Military Reviewin Google News
196 comments
Information
Dear reader, to leave comments on the publication, you must sign in.