Reports on the progress of the Syrian army

November 27 2015
49
The Syrian army is developing an offensive in several directions at once. With the support from the air, as well as in contact with the militia, the Syrian military expanded the strip of the liberation operation in the area of ​​the village of Harasta (this is one of the suburbs of Damascus). This was reported to the press by the representative of the AF SAR Brigadier General Ali Mayhub. 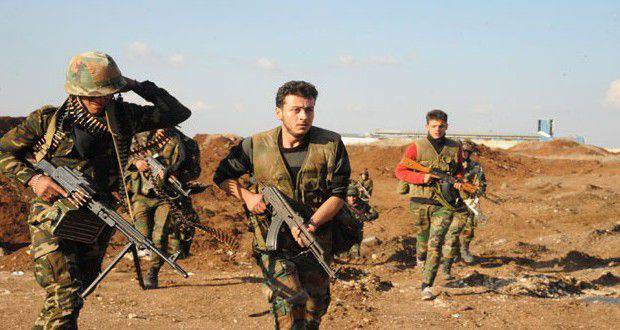 General Mayhuba quotes RIA News:
During the operation, the units of the terrorists, their strongholds are destroyed. Networks of tunnels detected, a large number of captured weapons and ammunition, demining from mines left by terrorists in the area. Destroyed tunnel length 250 meters in one of the areas in Haraste, which was used by terrorists in criminal activities.

The day before, a group of militants attempted to break through the front in the Palmyra region. Artillery fire and aviation the militants were eliminated.
Successfully operate units of the armed forces of Syria to the south and east of Homs. General Ali Mayhub notes that the positions of militants in these areas, along with several terrorists' vehicles equipped with large-caliber machine guns, were destroyed the day before.

Ali Maihub:
Units of the SAR armed forces fired at groups and command posts of terrorists in the areas of Jizi, Mkhin, Deir-er-Fol, Dolmer, Attag mountains, Ham Khel Abbat, livestock breeding station, Addag Al Homla and Assovanna. In the vicinity of Homs, the army inflicted heavy losses in manpower and equipment to terrorists.

According to the news agency SANA, the air forces of SAR and VKS of the Russian Federation attacked the ISIS terrorists near the settlements of Tel-Ahmar, Hmeima and Rasm al-Aboud in the province of Aleppo. As a result of the airstrikes, command posts were completely destroyed, as well as warehouses with weapons and ammunition, several units of military equipment.

In Latakia, Rashid Baghdash, military adviser to the terrorist group “Jaish al-Mujahaddin”, was liquidated, commander of one of the battalions Abbas Hijazi and a militant named Mumamad Salim, who was the leader of the Al-Firka al-Ulya gang associated with Jabhat al-Nusra .

According to the Syrian Armed Forces General Staff, during the week Syrian aviation destroyed the 673 object of terrorists in different provinces of the country. It is noted that in the north, a gang consisting of Afghan mercenaries was liquidated.

On the highway Sarmada - Bab al-Hawa destroyed a column of vehicles of terrorists.

On the eve of the official representative of the Armed Forces of the Russian Federation, Major General Igor Konashenkov said that the channels for the supply of weapons of terrorists in Syria from abroad are blocked.