Protests in front of the Turkish embassies in Sofia and Athens

November 28 2015
153
Whatever nonsense the Bulgarian politicians did, the Bulgarian people are and remain Slavic and Orthodox. And if someone has offended the elder Russian brother, the younger brothers will stand up for him. After all, good brotherhood is better than wealth.


26 November 2015 Several hundred protesters came to the Turkish Embassy in the Bulgarian capital Sofia. People condemned the criminal aggression of Turkey, whose November 24 pilot shot down a Russian Su-24M aircraft bombing terrorists in Syria. At the end of the rally, the protesters went to the Russian embassy. The priest of the Bulgarian Orthodox Church served a memorial service for the deceased pilot Oleg Peshkov and the marines Alexander Pozynic. Sympathetic Bulgarians laid flowers and wreaths near the fence of the Russian Embassy. 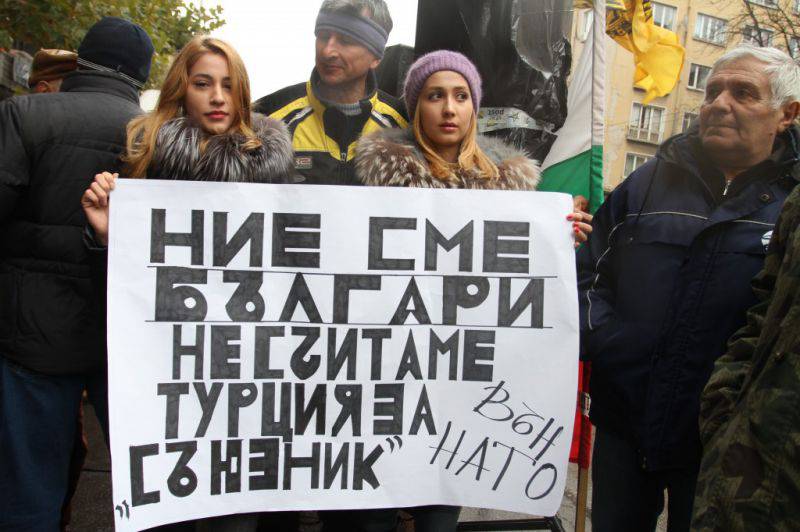 We are Bulgarians. We do not consider Turkey our “ally”. NATO is out! 26.11.2015. Protest in front of the Turkish Embassy in Sofia

At the rally in front of the Turkish embassy, ​​the leader of the nationalist party “Attack” and member of the Bulgarian National Assembly Volen Siderov once again reminded that many decisions in the Bulgarian policy are made under pressure from the embassies of Turkey and the United States. The current leaders of Bulgaria have no dignity and responsibility, they are unable to defend the sovereignty of the country, they resigned themselves to the dictates of the EU, NATO, the United States and the global financial backstage. Turkey has never been a partner of Bulgaria. Turkey has always had aggressive and provocative intentions towards the Bulgarians. In his book “Strategic Depth,” Turkish Prime Minister Ahmet Davutoglu officially announced Ankara’s claims to restore the Ottoman Empire in Eastern Europe. Now the neo-Ottoman imperialist Davutoglu openly boasts of his decision to destroy the Russian plane that fought against the terrorists in Syria.

In the Greek capital Athens, too, a procession and rally took place in front of the Turkish Embassy. The organizers of the action said: “We are in solidarity with the Russian president. Ankara's action is a stab in the back. This is a stab in the back not only in Russia. This is a backstab of the international antiterrorist coalition. We demand that the political leadership of Turkey and the direct perpetrators of this atrocity be held accountable. ” The violent reaction in Greece is also caused by the fact that the Turkish Air Force constantly violates the airspace of the country. According to the General Staff of the Greek Air Force, in 2014 there were 1269 cases, of which 14 flew over the territory of Greece, in January-October 2015 were 1233 and 31, respectively.

Like most other nations, the Bulgarian people are also politically, ethnically and religiously heterogeneous. In addition to the Bulgarians, there are Roma, Turks, Vlachs, Gagauz, Armenians, Jews, Russians and Ukrainians living in Bulgaria. The largest religious group in the country is Orthodox, but there are still Muslims, Catholics, Protestants, Jews and even Buddhists. Normal Bulgarians every year on May 9 come out with red banners and St. George ribbons to bow and lay flowers at the monument to the Soviet Army in the capital. But there are scumbags who strive to paint it with spray.

Whatever the internal differences of the Bulgarian people, throughout the European Union there is no state where they would love and sympathize with the Russians more. Whatever happens to Russia, at least half of the ethnic Orthodox Bulgarians would try to support it, as far as their strength is enough. And most of the other half at least sympathize with her and would not do Russia any harm even in words.

Unfortunately, the family has a black sheep. Among the Bulgarians there are russophobes. But is it in the Baltics or in Ukraine they are not? Or are Russian liberals and belolentochniki better than Bulgarian democrats? There are people for whom the glass is always half empty. What is it - a few hundred people for the one and a half million Bulgarian capital? But after all, in 12-million Moscow (and with suburbs - 15,5 million) in front of the Turkish embassy, ​​all 600 people came out to protest.

Half a glass is not at all as small as it seems to some. Especially in comparison with other glasses that are completely empty or full of bile and vinegar. Half a glass is a wonderful and very solid foundation that we all must develop and strengthen. So that in the united house of the Orthodox civilization there should be a full cup. 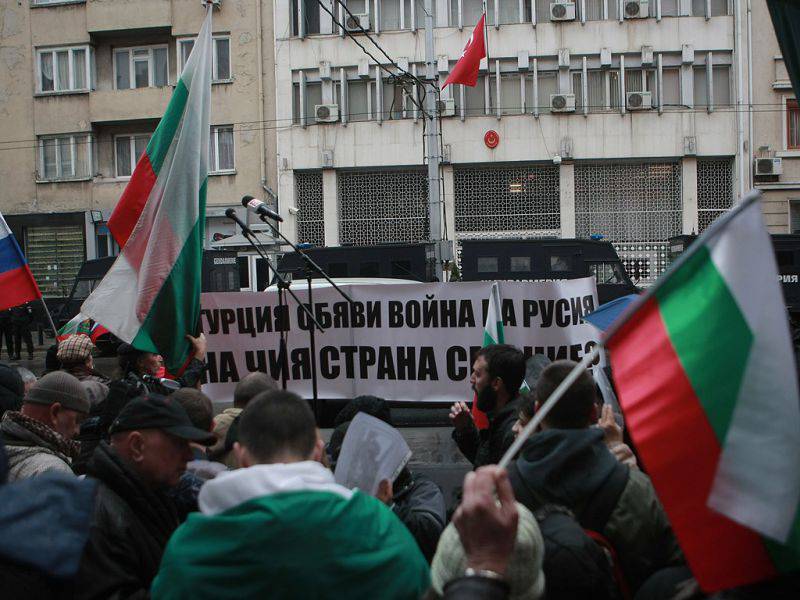 Turkey declared war on Russia. Whose side are we on? 26.11.2015. Protest in front of the Turkish Embassy in Sofia 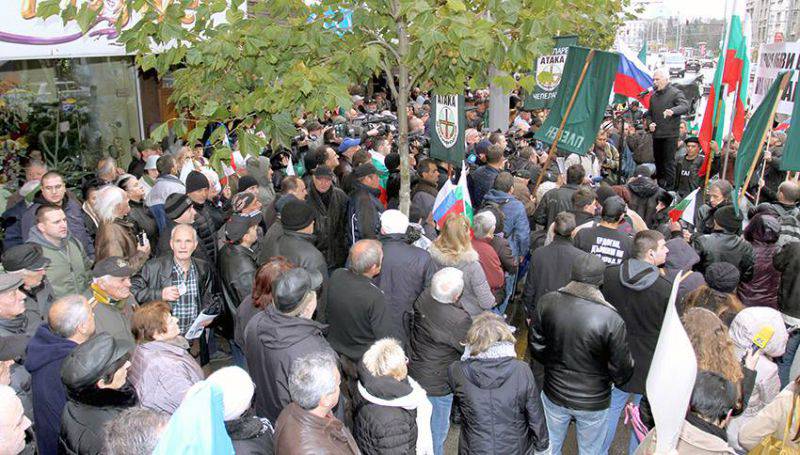 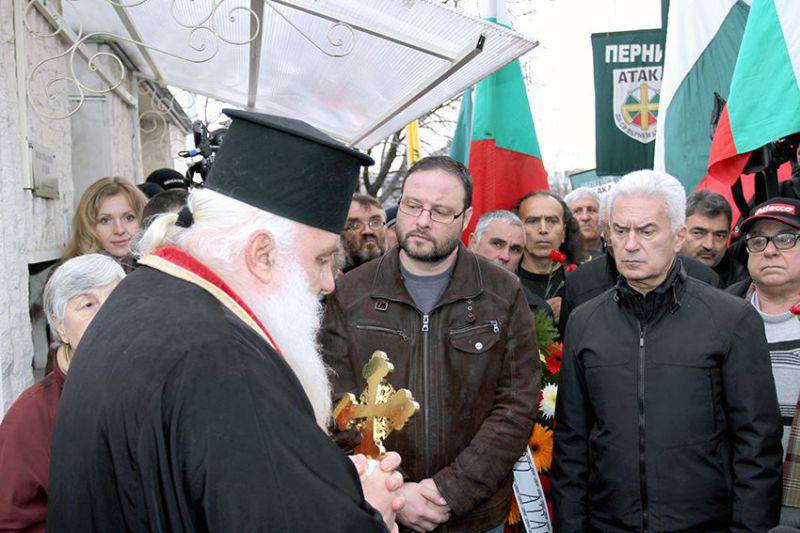 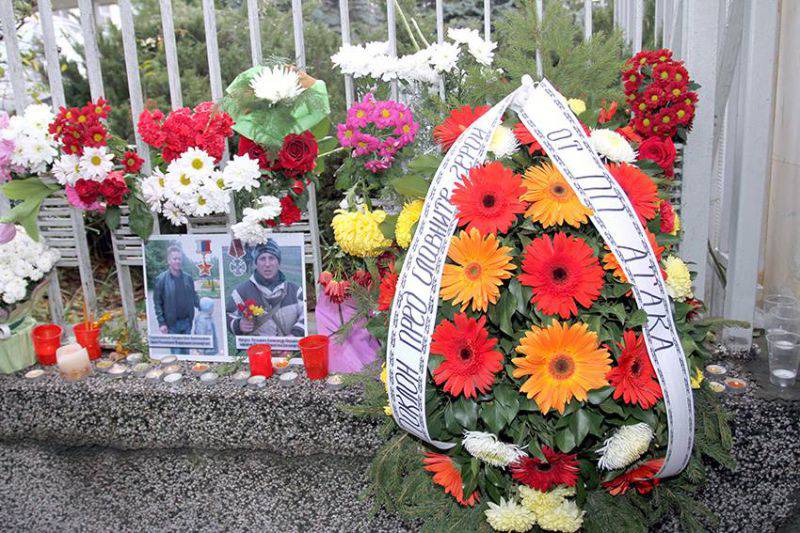 26.11.2015 Embassy of Russia in Sofia. Flowers and wreaths to fallen Russian heroes