Middle East alignment in the light of recent events

November 27 2015
90
The world has changed once again. The reason for us is more than sad, but I am sure that all those who should should learn a lesson from this tragedy. And those who should receive a lesson will receive. 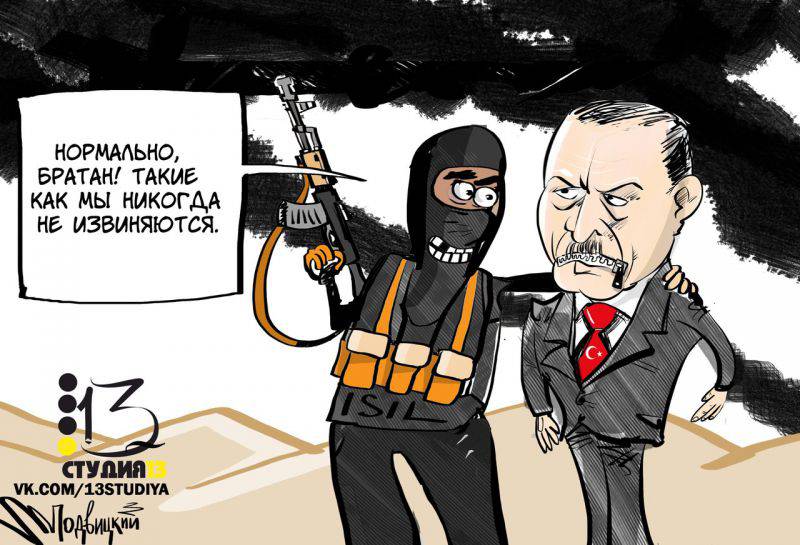 The situation in the Middle East becomes such that it is very difficult to predict its further change. Difficult, but not impossible.

Recep Erdogan finally played in the sultan of the Ottoman Empire, and thus greatly complicated the Middle East alignment. And more than a kind of NATO reaction confirms this. No one, except, of course, the United States, wants another round of complications with Russia. And this is good news. But the reasonable question: what's next?

Turkey had a chance to become a leading regional power in the “zero” years, when its foreign policy doctrine was based on a concept developed by the then foreign minister, now Prime Minister Ahmet Davutoglu. This concept was called "zero problems with neighbors" and proclaimed the need to strengthen partnerships with all nearby states - up to the normalization of relations with such problematic, from the point of view of Ankara, countries like Greece and Armenia.

In general, the duet Erdogan - Davutoglu began to turn out very well. One possessed a certain charisma based on Islam, the second possesses an extraordinary mind. Turkey developed cooperation with neighboring Arab countries - Libya, Iran, Egypt, Syria. Ankara’s revenues were in the billions of dollars.

But all good undertakings have destroyed exorbitant ambitions. At the end of 2009, Davutoglu openly stated in one of his speeches:

“We are called neoosmans - yes, we are neo-osmans, we are forced to deal with neighboring countries, and we will even go to Africa.”

This policy eventually led Ankara to actively participate in the "Arab Spring", during which Erdogan made a lot of mistakes. Finally, the Turks really hit their heads on the Syrian bridgehead.

In fact, Erdogan tried to create a confederation within the borders of the Ottoman Empire, and got a civil war with the Kurds, a conflict on the Syrian border and complicated relations with the United States. And, not having time to stop in time, ruined relations with Russia.

Erdogan was in an extremely difficult situation. The current Kurdish problem is a real threat to the integrity of Turkey. The United States has a project "Independent Kurdistan". The Kurds have actually received autonomy in Iraq, and they may also get in Syria. Turkey is in question.

In today's alignment in the Middle East, Turkey has no allies. Moreover, Turkey is actually surrounded by enemies.

After Iran’s withdrawal from the regime of forced isolation, many forces are betting on Iran. Although in fact Iran is not the Middle East, but it is there, as they say, with legs. And Iran, with its attitude towards the Kurds, is not an ally of Turkey. Moreover, some time after the start of oil and gas exports, Iran is able to put its armed forces in order and not yield to Turkey. Plus a fairly balanced policy. Well, we should not forget that Iran is a country with huge reserves of energy resources, which ranks third in the world in oil reserves and second in gas reserves. And about the potential of the Turks can only dream of.

Of course, Assad has already properly appreciated all the efforts of Erdogan in the collapse of Syria and the support of the Turkmen and ISIL. Yes, militarily, Syria is not the same today as the 10 years ago, but ... Russia. Which, by the way, is quite suitable for Iran.

Erdogan did plan to realize his non-Turkic ambitions in partnership with Qatar and Saudi Arabia. However, Turkey as a secular state does not have such weight in the eyes of traditional (and even more radical) Islamists in these countries. Moreover, the Muslim Brotherhood, represented by Erdogan, is absolutely unpopular with the Saudis. As demonstrated by the Egyptian events. And Erdogan clearly demonstrated how he realizes these ambitions during the “Arab spring”.

Both Saudi Arabia and Qatar have purely nominal armies. Nevertheless, being on the opposite pole from Erdogan, they create a kind of outpost on the path of Turkey’s imperial ambitions, arming Egypt. Many sources talk about direct and direct relations of Qatar and the SA with ISIS. But this is an oriental subtlety: supporting ISIS, which is the focus of radicalism, SA and Qatar do not want to see Erdogan use the fruits of terrorist victories. This, of course, is about the transit of oil produced by ISIS in Syria and Iraq.

The goals and objectives of Qatar, SA and Turkey are different. It's clear. IG and the Great Ottoman Empire-2 - things are absolutely incompatible, even geographically. Therefore, the SA and Qatar are not just not allies of Turkey, moreover, they are heavily arming his opponents.

When the Muslim Brotherhood came to power, Erdogan celebrated the victory. Together with his BM counterpart, Mursi Erdogan really got a chance to realize his ambitions. But the change of power exactly a year later and the arrival of al-Sisi put a cross on this. And at the same time on the normal relations of Egypt and Turkey.

Today the army of Egypt is a very impressive formation. Yield to the Turks only in the "freshness". But with the money of Saudi Arabia and the capabilities of the military-industrial complex of Russia, with which a number of contracts worth about 22 billion dollars are currently concluded, the Egyptian army will take a leading position in the region. Plus you should not forget about the annual military assistance from the United States.

Perhaps the poorest country in the region, with the most modest army. And having many internal problems, such as almost half a million Syrian refugees from areas captured by ISIL. The position of Jordan has always been frankly pro-American. Jordan joined the coalition led by the United States, and until recently, the statements of Jordanian officials on the Syrian issue did not differ from what was said in Washington. Recently, however, the position of Amman began to change. This was largely due to the success of the operation of the Russian VKS in Syria. Jordan has expressed a desire to coordinate the actions of its military with the Russian. The creation of an information and logistics center in Amman is planned, by analogy with that created in Iraq.

The army of Israel to comment does not make sense.

And the relationship is as follows. Despite the fact that Israel is preaching a frankly anti-Syrian line (with some good reasons for that), despite its rather tense relations with Iran, Israel is one of Turkey’s strongest opponents. Also not without reason. Today, Israel is quite in a warm relationship with Egypt (after a change of power there) and, therefore, with Saudi Arabia. In fact, it is a kind of triad that is ready to “make friends” against Erdogan.

In fact, today, through its actions, Turkey represented by Erdogan has turned the whole region against itself. Plus the USA, Europe and Russia. What Erdogan counts on is difficult to say. If we take into account NATO membership and the possession of the second army in the bloc, we hope that the rest will support him ...

After all, what Erdogan is trying to do now is an attempt to reshape Syria and put the situation exclusively under its control. But prevented the actions of the Russian HVAC.

The plan was clear: to capture the very same 98 kilometers of the Syrian border, inhabited by ethnic Turkmen, who openly support Turkey and fight with the troops of Assad. Create a kind of "buffer zone" there, officially introduce a contingent of Turkish troops to protect the refugees and, under the cover of the camps of these refugees, train the militants. And continue to seize the territories of Syria. With the help of the same units LIH.

No wonder that the chief of the Turkish National Intelligence Organization, Hakan Fidan, as recently as 25, November, officially spoke in support of ISIS.

"ISIS is a reality, and we must recognize that we cannot destroy such a well-organized and popular state system as the Islamic State."

Fidan called on Western colleagues to "reconsider their views on the Islamic political movement, put aside their cynical mentality and thwart Vladimir Putin’s plans to crush the Syrian Islamist revolutionaries."

And with the help of the “well-organized” ISIS system, to seize territory in Northern Syria, up to and including Aleppo. Because in the Turkish sense the same Aleppo is the original wilayet of the Ottoman Empire. Historically, yes, but the Ottoman Empire a lot of things belonged about four years ago. What this afternoon looks like absolute barbarism.

But with our bomber Erdogan obviously went over the superfluous. He acted as a provocateur instigator who insults you, and then runs off around the corner where the ambals with bits must wait for you. But in this case, the NATO comrades, who were supposed to play the role of ambalov, twisted a finger at their heads, and refused to support the Turkish leader. In a soft, true form. Say, deal with the Russian himself. But even after that Erdogan prefers to fly somewhere, having bit the bit.

Our история I knew several such examples. When the country's leader condemned himself to war with the whole world. Well, or with his big part. No need to say how it ended, right? War "against all" is impossible to win. Neither economic nor with the help weapons.

Erdogan’s policy has put Turkey in a difficult position. The allies are practically absent, and Russia's actions in response to an act of aggression do not allow resorting to the defense of the NATO bloc. Turkey remains alone in the region against countries that explicitly or implicitly want the fall of Erdogan. Speaking simply, Erdogan "got" all without exception. Even the USA. About Europe in the face of France and Germany can not speak. Yes, Erdogan firmly took Europe by the throat, organizing the flow of refugees from its territory. And this will also be reckoned to him.

There was the only new ally who could somehow support Turkey. Given the many joint economic projects, investments and everything else. But even with Russia did not work.

Predict the fall of Erdogan as a ruler is not worth it. This is an obvious fact. The West is unlikely to bet on this card. East - all the more. The map of Turkey will be beaten in the near future. And only Erdogan will be guilty of this.

Ctrl Enter
Noticed oshЫbku Highlight text and press. Ctrl + Enter
We are
The bloody games of the Turkish "Sultan"Erdogan was left without a "brother"
Military Reviewin Yandex News
Military Reviewin Google News
90 comments
Information
Dear reader, to leave comments on the publication, you must to register.