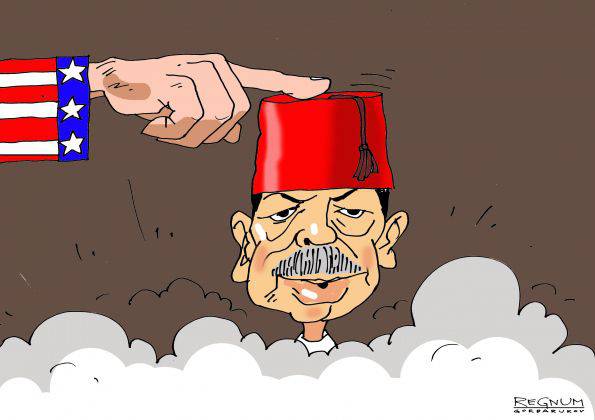 Interview of a military expert, a regular contributor to the magazine Arsenal of the Fatherland, a specialist in the field of application of the Military Space Forces, Aleksey Leonkov

Alexey Petrovich, Vladimir Vladimirovich Putin called the unprovoked attack of a Turkish fighter on a Russian plane, returning to base after an attack on the positions of ISIS, "backstab." Do you agree with this assessment?

How can you argue with the president? Only it seems to me that he, in addition to the commonly used meaning of this phrase, he had in mind an additional meaning. The analysis shows that the attack on the Su-24М2 of the Russian HQs was pre-planned by Turkey and its military partners. In this case, we are already talking about the operation "Backstab."

Indeed, our plane was waited in ambush by Turkish interceptors, a sabotage and reconnaissance group disguised as local Turkomans was located on the ground, the CNN and FOX crews were delivered in advance ...

This is only tactical support for the finale. The operation itself began much earlier. Throughout the entire period of the operation of the Russian air forces, the intelligence of NATO countries was not idle. Behind our actions aviation constant monitoring was carried out by means of space, air and ground reconnaissance. The attack itself involved several reconnaissance and targeting systems - at least 3, as well as two F-16s with the latest AIM-9X missiles.

How it all happened?

US Air Force plane Boeing E-3 Sentry AWACS took off on November 24 from Preveza airbase in Greece. The second E-3A Saudi Air Force took off from the Riyadh airbase. Both aircraft performed one common task - determining the exact location of the aircraft of the Russian Aerospace Force. They chose the "victim".

The American E-3A was to determine the mode of operation of the radar control weapons Su-24М2 aircraft, to check whether it is in a state of search or has already completed the capture and accompanies the target, generating data for firing. It is known that AWACS can control the actions of aviation in combat and transmit information to the BREO and PNK aircraft for combat operations.

That is, to determine how defenseless our plane?

It turns out that yes. As is known, Su-24М2 returned from a mission, and his NCP worked in the “navigation” mode together with GLONASS, he went to the base and was not preparing for action. E-3 all the time passed detailed information about the Su-24М2 pair of Turkish patrol F-16CJ. This aircraft is specially produced for Turkey. Its feature is the presence of a computer that controls the new radar AN / APG-68 and performs the role of the second pilot-navigator.

But this information is not enough to enter the high-speed target. I used something else?

Indeed, the accuracy of the F-16CJ fighter aircraft was additionally provided by the Patriot US air defense systems deployed in Turkey, or rather their multifunctional AN / MPQ-53 radar. Patriot air defense system can work with E-3 and MENTOR electronic intelligence satellites, it is possible that the Geosat satellite also participated in the satellite constellation.
The flight path of the F-16CJ indicates a high-precision triangulation target: a pair of E-3A plus a Patriot radar system plus geostationary SAR satellite MENTOR and, possibly, the Geosat satellite.

At the same time, E-3 gave directions to where our plane was in the air, determined its flight level, speed, weapon control status, the Patriot radar, together with the MENTOR radio-electronic reconnaissance satellite, provided Su-24М2 radio telemetry relative to the surface - that is, it gave the exact predicted appearance sector aircraft relative to the mountainous terrain.

It turns out that Turkish fighter exactly know where our plane waiting in ambush?

Of course. The F-16CJ went into the launch area and, from a distance of 4-6 kilometers, it almost at all ((!)) Launched an AIM-9X Sidewinder air-to-air missile into the rear hemisphere of the Russian bomber. At the same time, the AN / APG-68 radar of the fighter launched the missile operated in the target illumination mode: it turned on at the moment of launch and turned off after the rocket confidently captured and hit the target.

I did our pilots the ability to save the plane?

No. Chance to avoid defeat crew Sioux 24M2 were zero.
Against the rocket AIM-9X with a new matrix infrared homing head, which forms an image of the target in the infrared range and is insensitive to heat traps, Su-24М2 does not have countermeasures. His countermeasures: the SSE-15 radar irradiation warning station, the LOE-82 radar radiation warning station, the SPS-161 active jamming station, and the APP-50 false thermal target ejection device cannot confront the new rocket AIM-9X.

And if there was support for the fighters?

Now it will be. Of course, the tragedy could have been prevented by a couple of Su-30CM, which are equipped with the Khibiny-U armored military unit. But no one expected a stab in the back from an ally, much less warned about the details of the operation by our partner.

Do you mean “American partners”, the very ones who own the “Patriots” and “Avaksy”, as well as satellites, possibly involved in the operation?

Yes, with a high degree of probability. No Turkey's own capacity for such meticulous and very precise work. And do not forget about the second E-3, assigned to the Air Force KSA. The whole scenario quite fleeting, the score went to second.

Is everything went so smoothly?

The Turks still made a mistake, because of which the provocation was not entirely successful. F-16CJ came out to be defeated late in 2 minutes when Su-24М2 left the area of ​​the disputed 68-kilometer territory in the north of Syria (it took 1,5 minutes to reach its maximum). The F-16CJ “to defeat” command was not canceled, so the launch of the missiles was made a little further than the calculated point. This confirms that the shooting of the Su-24М2 fall was planned both from the territory of Syria and from the territory of Turkey, however, the “Syrian” shots are more detailed. It seems that it saved our navigator. He was able to go to the "Zelenka" and wait there for the search party.

Interviewed expert of the Commission on Security MHD Dmitry Efimov

Ctrl Enter
Noticed oshЫbku Highlight text and press. Ctrl + Enter
We are
A great interview with Sergey Lavrov: about Ukraine, Obama and IranWhat you didn't want to know about England
Military Reviewin Yandex News
Military Reviewin Google News
214 comments
Information
Dear reader, to leave comments on the publication, you must to register.