November 27 2015
30
Russian-Turkish war 1768-1774 Ottoman Sultan Mustafa III declares war on the Russian Empire, declaring claims to Russia's actions in the Commonwealth. There was a so-called Balt incident, when the Turks staged a pogrom on the Orthodox population of the town of Balta, which turned to Russia for help.


Russian-Turkish war 1787-1791 The reason for declaring war by the Ottoman Empire of Russia is associated with Russia's refusal to fulfill the Turkish ultimatum. The Turks demanded to restore the vassal dependence of Georgia and the Crimean Khanate. Taking advantage of the Russian refusal as a pretext, the Ottoman Empire, not without the moral support of Britain and France, declared war on the Russian Empire.

Russian-Turkish war 1828-1829 In March, 1826 of the year, Emperor Nicholas I, in an ultimatum, demands that Turkey withdraw its troops from the Moldavian principality and Wallachia and recognize Serbia’s internal self-government, which Turkey should have done under the Bucharest 1812 peace treaty of the year. Turkey, which initially declared its willingness to fulfill its obligations, ultimately could not agree to the conditions, and also opposed the full recognition of the independence of Greece. In April 1828, the Turks closed the Bosphorus, which was the formal reason for the start of full-scale hostilities.

World War I. Formal occasion (Casus belli) of the announcement (prior to the official start of the WWI) of the Serbian War by Austria-Hungary: assassination of the member of the extremist group Mlada Bosna by Gavrila Principle of the Archduke (heir of the Austro-Hungarian throne) Franz Ferdinand with his wife, Duchess Sofia Hohenberg, in Sarajevo XNOGN 28 of the year.

World War II. The official reason for the declaration of war by Germany to Poland: the so-called Gleijvitsky incident, he is also Operation Canned. The SS officers, disguised as Polish soldiers, carried out an “attack” on the radio station in Gleijvice (now the Polish city of Gliwice) and broadcast an “anti-German appeal” in Polish. From the statement of Hermann Göring:

The war broke out due to the fact that the Poles carried out an attack on a radio station in Gleijvice.

US-Vietnamese war. Here formal motives overlap one another, complementing each other. The first and main one is “the fight against the spread of the communist threat in Southeast Asia,” the second (more specific, as it is called) are the fake messages of American intelligence that the American destroyer Maddox, "being in neutral waters" and carrying out a "purely peaceful mission", came under fire from North Vietnamese boats. Interestingly, the crew of the American destroyer refuted this data, but at that moment few people were concerned about it ... The US went to invade Vietnam.

Why all this historiographic information? To the fact that recently, apparently, the very coordinate system itself has changed for declaring or entering the war. If, at the time of these, a flashing romance of a monarchical person of one of the states with the mistress of a monarchical person of another state or something like that could have served as a pretext to lead one army to another. Now everything is really different. Ultimatums - there are frank provocations - more than enough, but the world, the essence of which remains the same, has undergone significant and very intricate changes. 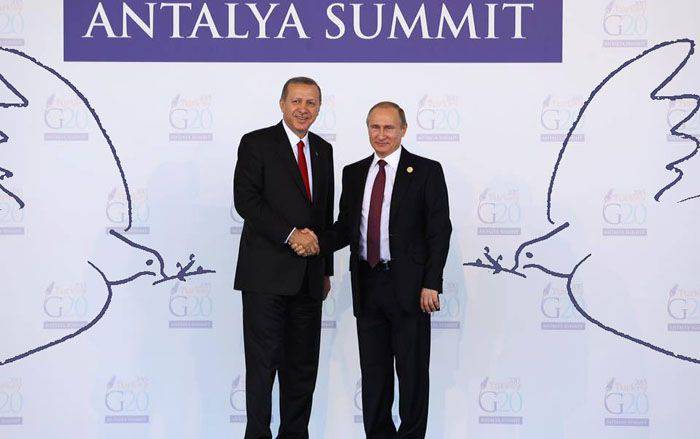 Of course, we will talk about the case that today everyone knows - the Turkish Air Force strike on the Russian Su-24 bomber. The data of the Russian Ministry of Defense suggests that the plane fell in 4 km from the border with Turkey - in Syrian territory, and the attack itself hit the plane while Su-24 was at a distance of approximately 1 km from the hypothetical line of entry into the Turkish air space. The Turks stubbornly assert that the plane “invaded” Turkish airspace, and that they began to “warn” the crew of the aircraft almost from the moment it took off from the Hmeimim airbase, and “mom swear” that they did not know about the military statehood the aircraft.

In any case, something like this would happen "dtsat" years ago - war would not be avoided. The reason for the war on both sides, as they say, is exceptionally perfect. - The Turks declare war on Russia for the fact that a Russian plane “invades” Turkish airspace, Russia declares war on Turkey for the fact that it did not invade anywhere, but was shot down over a third state in violation of all international norms. In general, years ago, endtsya or hundred endtsin back battalions and regiments would have already gone to whip each other on separate fronts with possible connectivity and additional willing to participate in the conflict. Field Marshals would have already moved their armies, considered the need for carts and stuff like that.

But times have changed. War between states became possible only when one state militarily and economically surpasses the other by several orders of magnitude. Moreover, formal occasions are sometimes simply amazing: a stronger and richer state says that a weaker and less well-off state wants to become stronger and richer, then it is demonstrated “by what methods” - something like Powell’s test tube or photos with “Milosevic’s marvels”. A stronger state says that the strong and so, they say, is enough, and therefore "we will not let the state become stronger due to the weakening of the already weak" - and rushed ...

But wars between states whose military potentials do not differ by an order of magnitude or several orders of magnitude have become virtually impossible in the situation of victorious globalization. No, there are, of course, surprising exceptions ... For example, some people in Ukraine seriously believe that the potential of this state is commensurate with the potential of Russia, and that this state really leads a war against Russia. Although, what kind of an exception is this? .. It is just a deformation of consciousness in individual representatives of a neighboring country ...

So, globalization ... As soon as an incident takes place, during which, figuratively speaking, beating muzzles during these times, an analytical brainstorming begins. Brainstorming on the one hand: how many boxes of Turkish tomatoes must be recognized as pesticidal, so that the Turkish authorities have a feeling of guilt for their deeds? Brainstorming on the other hand: how next time to show the Russians that we don’t want them to bomb tank trucks with cheap oil for us? At this moment, the "world gendarme" is declared, and ... introduces sanctions ...

The situation with the attempts of “deep analysis” of the one to whom it would be more profitable not to start the war, and who will lose how much from its beginning, if you still need to start, can be treated as you please. Dartanyansky is “weakness and chewing of snot,” in market terms it is “an opportunity to level global risks.” When the opinion of the first outweighs the second, the second are indignant; when it turns out at the second, the first are not at all delighted. But this seems to be the principle of confrontational relations of the 21st century. Today, no one (or almost no one) is ready for an open military confrontation. Even if one country has a nuclear weapon, and the other is not.

Pocket terrorist groups, grown by some people, as it turned out for some time, for the same “some people” are not a universal tool for achieving goals either - they can be burned out with OFABs, CABs and “Calibers”. But on the other hand, the destruction of cruise missiles by cruise missiles and air bombs does not guarantee that new fodders will not appear in their place, and that their main sponsors will “realize” their mistakes and come with repentance.

Everything, in fact, is simple. This is the world created by the dollar ... The world of global dependence, and in some cases, frank vassalage. And after all, people on the sinful Earth got used to it as they once got used to the idea that the Earth itself stands in the center of the Universe on three elephants. It seems that a change in understanding will come only after the birth of the new Copernicus, Galileo and Giordano Bruno. In the meantime, as diplomats say, serious concerns ...

Just do not think that this is some kind of appeal to return the manner of conduct of a century ago and start a war on any sneeze. Do not rush to extremes. But only, firstly, it was not at all sneeze, and, secondly, it is generally worth considering where the dogma is capable of leading the world around a famous printing press.