November 28 2015
47
The experience of military-industrial cooperation of the Warsaw Pact countries can be in demand in the CSTO.


This year marks the 60 years since the creation of the Warsaw Pact (VD), which united in the framework of the military-political union of the USSR and almost all the countries of Eastern Europe. The reasons for the collapse of this unique organization are purely political, more precisely - Gorbachev’s traitorous course towards the collapse of the anti-NATO coalition. Meanwhile, the WD has marked a qualitatively new stage in the development of the military-industrial complex of the participating countries on the basis of their close inter-sectoral cooperation. This experience can be claimed today.

Already in June, 1955, one month after the declaration of the Warsaw Pact, the participating countries agreed to develop a long-term program of military-industrial cooperation with each other. She was ready for 1958 year and adjusted to the geopolitical circumstances and scientific and technological achievements. According to available data, while in 1961, about 25 percent of the volume of military-technical products were produced on the basis of cooperation in the WD countries, by the end of 70's, over 40 percent. 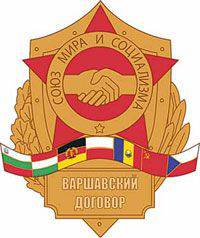 Joint (share) financing of relevant R & D and finished products was carried out, in which the share of the USSR was no less than 40 percent. GDR and Czechoslovakia - approximately 20 percent. On the basis of cooperation in the 50 – 70-ies, primarily the means of telecommunications and space intelligence, warning and anti-missile weapons, submarines and long-range air forces, as well as devices that ensure the highest possible accuracy of retaliatory strikes against NATO targets. At the same time, the share of East German and Czechoslovak "stuffing", for example, in Soviet missile armament and anti-missile defense equipment exceeded 30 percent in general, in technical equipment tank units and the USSR Navy reached 20 percent.

The ever closer development of military-industrial cooperation in the VD could not but disturb the countries participating in the NATO bloc. Therefore, various efforts were made to slow down and disrupt this interaction, including using the foreign policy mistakes of the Soviet leadership.

Thus, at the end of 50, Moscow’s unbridled anti-Stalinist policy led to a break in relations with Albania, which participated in the VD, and it was in this country (since 1951) that the largest naval base of the USSR in the Mediterranean region, the port of Vlora, was located. Moreover, it coexisted with NATO naval facilities in Italy and Greece, which could not help deter the aggressive plans of the alliance in the Balkan-Black Sea region (as well as against Egypt during the Suez crisis in 1955 – 1956). The conflict with Tirana almost turned into military actions of the USSR against Albania. In 1961, the base had to be evacuated. At the same time, Albania almost stopped supplying chrome, cobalt, vanadium, nickel and their alloys, mercury, graphite to the Soviet defense industry. Yes, the volume of these deliveries, it would seem, is small, but their total price per unit of conventional production was at least four times lower compared with the investment of 60-x, the beginning of 80-s in the development of resources of the same raw materials in the USSR, Bulgaria, GDR .

According to available information, provoking anti-Soviet demonstrations in the HP countries was also aimed, among other things, at separating the military-industrial complex. The notorious events in Hungary (1956), Czechoslovakia (1968), Poland (1980) led to the fact that in 1956 – 1957, 1967 – 1969 and 1980 – 1983, defense deliveries from countries of the mentioned countries were at least doubled.

In 1966, an inter-sectoral balance of the military-industrial sectors of the entire VD region was developed with details on the supply of cooperative products. In 1967, this document was adopted and began to be implemented. As a result, by the beginning of 80, the cumulative requirements of the military-industrial complex of the HP countries in raw materials, semi-finished products, components and finished products were more than 90 percent provided by the industrial and sales cooperation of the participating countries (although Romania in 1968) announced limited participation in technological chain, and Albania withdrew from HP in the same year). The missing - mainly raw materials and its semi-finished products - were imported from friendly India, Cuba, Vietnam, Guyana, Guinea, Iraq, Congo (Brazzaville), Angola, Mozambique, Uganda.

By the end of the 70-s, a “chess pattern” of enterprises - suppliers and consumers of military-technical products (including intermediate ones, that is subject to further processing) in the HP region, was developed. This enabled the second half of 80's economic and technological optimization of communications between such enterprises and more than a third to reduce the costs of transport and logistics support of the military-industrial complex.

Such a unique experience may well be in demand with the development of military-industrial cooperation in the CSTO. It is increasingly relevant due to geopolitical trends and the active transfer of arms production in the NATO region closer to the borders of the Russian Federation and Belarus. Moreover, such plans are being harbored by the alliance with respect to Ukraine, Georgia (for more details, “Live, mine”, “MIC”, No. 44, 2015).

By the way, up to a third of military-industrial complex facilities in Eastern European countries - participants of the former Warsaw Pact are now used by the military-industrial complex of the leading NATO countries. The leadership of the North Atlantic Alliance appreciated the role and capabilities of these facilities as far back as 60 – 70s ...

Ctrl Enter
Noticed oshЫbku Highlight text and press. Ctrl + Enter
We are
Russia and India are entering a qualitatively new level of relationsUralvagonzavod today is not just a large machine-building plant, but a research and production corporation
Military Reviewin Yandex News
Military Reviewin Google News
47 comments
Information
Dear reader, to leave comments on the publication, you must sign in.