November 26 2015
118
Informational portal «Crimea.Realii», being a “subsidiary” of Radio Liberty, which is funded from well-known sources, publishes (attention!) the conditions that are put up by terrorists who have undermined power transmission lines in the Kherson region in relation to the Russian Federation. In an interview with the correspondent “Crimea. Realia ”one of the leaders of the gang that carried out the terrorist attack against not only Crimeans, but also residents of the Kherson region of Ukraine, Mustafa Dzhemilev called the conditions put forward by terrorists against Russia. 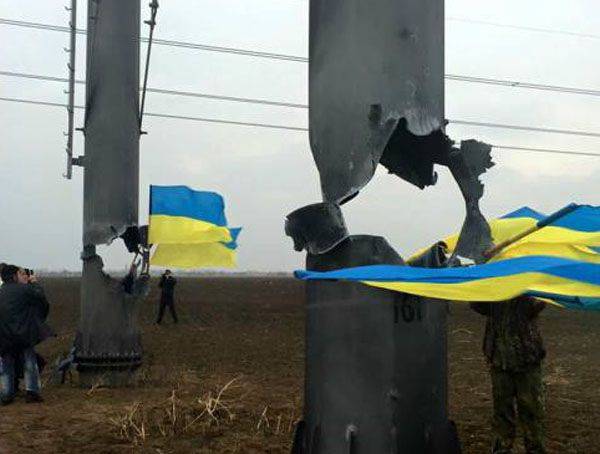 According to Dzhemilev, for electricity to go along power lines to the Crimea, Russia “must” release Ahtem Chiygoz (one of Dzhemilev’s “activists” who organized the riots in Crimea in February 2014) from custody and other members of an extremist group that is trying to what is called, muddy the water in the environment of the Crimean Tatars.

Cemilev:
They must take some counter steps. I believe that they should, first of all, release Ahtem Chiygoz, iconic figures. But they do not do this. Therefore, now such pressure from the public, what the hell should we turn on the light for them?

At the same time, Dzhemilev declares that Russia “is not taking such a step yet,” and therefore:
Our activists can not yet allow the resumption of electricity supplies to the Crimea.

“They cannot be allowed” ... That is, in Ukraine, the official authorities are not able to pacify a handful of “activists” who are carrying out terrorist acts, which are also beating on the budget of Ukraine.

Dzhemilev, who is a deputy of the Verkhovna Rada of Ukraine, said that he was waiting for consultations on the restoration of energy supply with Petro Poroshenko. According to Dzhemilev, he is aware that Ukraine is forced to pay heavy fines for non-compliance with agreements on the supply of electricity to the Crimea.

Ctrl Enter
Noticed oshЫbku Highlight text and press. Ctrl + Enter
We are
Dzhemilev: "Crimean Tatars live by the expectations of the end of this nightmare"Results of anti-terrorist work on Dagestan in April 2014
Military Reviewin Yandex News
Military Reviewin Google News
118 comments
Information
Dear reader, to leave comments on the publication, you must to register.