Erdogan made worse than a crime - he was wrong 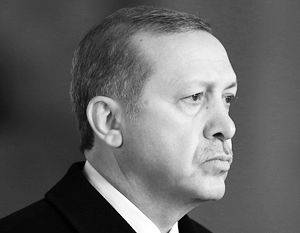 Russia will force Turkey to apologize in various ways - to ensure non-repetition of sabotage and to teach a lesson on how to behave with our country. But with all the need and imminence of bringing Erdogan back to life, one should not forget who benefits from the escalation of the Russian-Turkish conflict and its transfer to the stage of long-term confrontation. Certainly not Moscow, and not Ankara.


The Turkish leadership is already trying to mitigate the consequences of the destruction of the Russian military aircraft for bilateral relations. But, for example, the president is doing this in such a way that only worsens the situation - Erdogan’s statement that the Turks did not know whose plane they shot down cannot be called anything but a blatant lie. Prime Minister Davutolgu said that Ankara is not interested in exacerbating relations with Russia, because he considers her "friend and neighbor", but he also did not bring any apologies - the Turks continue to insist that they defended their territory.

Of course, Erdogan understood that the destruction of the aircraft would cause an acute crisis in relations with Russia, but at the same time he still believed that Putin would take his actions the way the Turkish president himself wanted: the Turks should be reckoned with more in the Syrian crisis, their role Syria cannot be understated in determining the future structure, and their position regarding both the Syrian Turkoman and the Syrian Kurds should be accepted by both Russia and the United States. Russia did not seek to annoy Turkey with its military operation, but objectively after the start of our actions aviation Erdogan felt humiliated. The fighting of the Syrian army with the support of Russian aviation in the area of ​​residence of the Syrian Turks, who are fighting both ISIS and Assad, pushed Ankara to make some kind of decision. Because it was silent to watch how troops consisting of even Syrian, but practically Turks, squeezed out of their territory, Ankara could not.

But instead of trying to agree with Russia and Damascus on the future of the Turkic population of Syria, Erdogan decided to go all-in - to demonstrate his coolness to Putin. It is not known what the two leaders spoke about ten days ago in Antalya, but it is clear that Erdogan was not satisfied with that conversation, and only after it and just a few hours after Putin’s trip to Tehran, that is, to historical Turkey’s rivals and Assad’s main allies, he decided to exponentially destroy the Russian aircraft. The solution, which, as it seemed to him, guarantees Turkey, albeit through a crisis in relations with Russia, an increase in the value of its shares both in the "Syrian hub" and in the Middle East as a whole, and even at the global level.

Did Erdogan have any reason to believe that Russia, although it will react violently to the destruction of the aircraft, will not threaten bilateral relations and after a while everything will return to normal? Most likely, he incorrectly assessed the soft reaction of Russia to his spring (after Putin’s trip to Yerevan) and autumn (after the start of the Syrian campaign) harsh statements to Moscow. Then Erdogan rather rudely publicly blackmailed Russia by the fact that it risks losing such an important partner as Turkey - in the first case because of the recognition of the genocide, and in the second because of the military support of Assad.

Putin did not respond in the same tone, and Erdogan most likely decided that bilateral relations and joint plans were the most expensive for the Kremlin. Turkey is very much needed by Russia, and nowhere will Moscow get away from it, especially in conditions of conflict with the West. Erdogan most likely did not consider the decision to bring down the plane as fateful: yes, the risk, yes, the increase in the rates, yes, the big game, but nothing, give it a ride. But it’s strange that during 12’s years of acquaintance with Putin, Erdogan, “Anatolian Putin,” as the West calls it all, as he used to measure all patterns, the West did not understand the character of the Russian president. Turkey is really very important to Russia - not only because of the current conflict with the United States, but also strategically - but Putin, like our country, does not forgive the betrayal, which was a stab in the back from the Turkish side. They do not forgive not the Turks, but Erdogan personally.

That is, the relationship is likely to recover even under Erdogan, when he apologizes for November 24, but the two leaders will not have personal confidence. This is the same thing that happened to Putin with Obama and the European leaders after the coup in Kiev in February 2014, when they first asked him to persuade Yanukovich to sign an agreement with the Maidan, and the next day, after his overthrow, they recognized the new government and " forgotten about the need to comply with the agreements guaranteed by the West. After such a personal relationship can be maintained, but with a person who does not comply with personal agreements, it is impossible to make plans for the future. And in the case of November 24, there was also a public insult to the country, that is, the situation is even worse.

But Putin, that is, Russia, offered a truly strategic partnership in the person of Erdogan of Turkey: while both parties remember the historical, and even today's geopolitical contradictions, it was possible to build mutually beneficial relations. All issues are solvable - and even Syrian - provided that both partners do not try to deceive each other and have at least partially coinciding interests. We have common interests: like Russia, Turkey is a sovereign state (NATO’s limiter is rather conditional, and in general Atlantic and supranational control over Turkey is much weaker than, for example, Germany), interested not just in strengthening its role in world, but also in the work on a new global architecture that will replace the “American-style world”.

Regional, national and even religious ambitions of Turkey do not necessarily have to conflict with the geopolitical and national interests of Russia. Especially if both countries agree that the main task for them is to strengthen their own civilization, and are ready to help each other in this work, and not to fight each other. One of the components of the Russian civilization is the Turkic element (starting with the same Tatars), and soon after the last Russian-Turkish war, which ended a hundred years ago, Moscow helped a lot to even leave a strong Turkish state from the Ottoman Empire.

Now there is a rivalry for influence in the Caucasus, but even a clash of interests in Georgia and Azerbaijan can, with a mutual desire, be translated into cooperation. Ankara’s attempts to become a leader for the Turkic peoples of Central Asia were largely unsuccessful, but the pan-Turkic project was doomed to failure anyway after Russia began returning to the post-Soviet space as an integrator and security guarantor. If Turkey does not pretend to oust Russia from Central Asia and does not play against us there, then everything else, including the delimitation of economic interests, can be agreed.

Pan-Islamic or pan-Arab ambitions of Turkey are not in fundamental contradiction with the interests of Russia (although they require us to take into account the interests of Iran), if, again, it does not consider itself as a “patron” of Russian Muslims. A large number of immigrants from the North Caucasus in Turkey, including former Chechen militants, does not mean at all that Ankara is doomed to be a center of anti-Russian forces. Experience the old, 19 century, Muhajir emigration from the North. The Caucasus (when, for example, many Adygs who fought with Russia during the Caucasian War left) shows that their descendants in their absolute majority no longer carry any special anti-Russian charge.

The rivalry in the Balkans, because of which, as well as because of the Caucasus, we mainly fought in the past, remains now, but even here both countries have at least a common competitor - the Germans and the European Union. Simply put, Turkey and Russia could work together and develop in the expanses of Eurasia - as heirs, even so different, of the Second Rome (Byzantium). As civilizations opposing the Atlantic project of a global melting pot, after all, Erdogan and Putin are patriots and nationalists, independent statesmen, and they are in favor of strengthening the traditional foundations of their civilization countries.

Agreeing on strategic cooperation with Russia, China, India and even Iran’s traditional rival Turkey would be much more profitable than playing games with the West, which each time ended for Istanbul, and then Ankara by simply using and deceiving them. And used in recent centuries, mainly for anti-Russian purposes.

And the most offensive for Turkey is that the current Erdogan adventure, which will not bring any benefits to the Turks, but only losses, can be used in the same way. True, the maximum damage would have been if Russia had led to provocation and, instead of teaching Erdogan, to start playing against Turkey as such, including playing the Kurdish card.

But, fortunately Turkey, Russia will not do this, because it is not in its strategic interests. We need a strong, friendly Turkey, just as it is needed by the nationally thinking and self-sufficient part of the Turkish elite, who understand the importance of serious relations with Russia. Turkey, like Russia, is not the West, and if Russia no longer plays other people's games, then, alas, Turkey can now be drawn into the anti-Russian combination, thanks to Erdogan. Of course, Erdogan did not want this, but he himself created a situation in which the atlantists have new opportunities for “playing Turkish”.

What Erdogan did was more than a crime, it was a mistake, and those who tried to organize a blockade would try to take advantage of it, and now they are doing everything to contain Russia. Now they will try to slay Russia and Turkey - naturally, while not acting openly - to do so in order to block the possibility of joint work between our two countries for decades. And to place Turkey in that anti-Russian redoubt, which the Atlantists gathered to build around Russia - from the Baltic to the Caucasus.

Another thing is that Russia is simultaneously working on building a broad front against the Atlantic project as such, and plans to build an anti-Russian redoubt will not be possible. But “forgetting” about Turkey or starting to spoil it wherever possible would be completely wrong. Hard to teach Erdogan a lesson should and should be, but without insulting Turkey and not pushing its people away from Russia.

Ctrl Enter
Noticed oshЫbku Highlight text and press. Ctrl + Enter
We are
A great interview with Sergey Lavrov: about Ukraine, Obama and IranWhat you didn't want to know about England
Military Reviewin Yandex News
Military Reviewin Google News
141 comment
Information
Dear reader, to leave comments on the publication, you must to register.