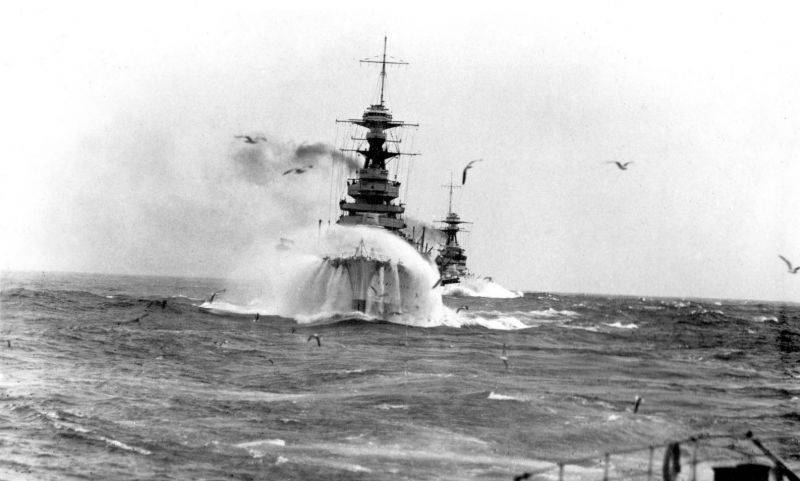 Comments of random visitors to the “Fleet” section are often not encouraging with originality. Readers focus on a couple of known cases, forgetting to analyze the whole picture. And then, on the basis of this, completely wrong conclusions are drawn. It becomes even a shame for the shipbuilders of the past, whose great creations in one instant are written into the incapable and useless trash.

As an example, the death of large and well-protected ships from artillery fire is usually given by the “Hood” and “Invincible”. Only a couple of successful salvos, and the sea giants went to the bottom, even without having time to revenge the enemy.

The Invincible example loses its obviousness when it comes to the full statistics of the Battle of Jutland. The British lost three battlecruisers (Invincible, Indifatible, Queen Mary), the Kaiser fleet lost one (Lutz).

Why did the stars side with the Germans? What explains the threefold difference in the number of losses?

The explanation must be sought not in horoscopes, but in the construction of ships. On the left is the German Derflinger type LKR. On the right is the British Invincible. And do not ask stupid questions.

All three British losses were caused by detonation, with the total loss of crews and ships.

LKR “Luttsov” received 24 powerful hits with large-caliber projectiles (305, 343 and 381 mm) and slowly sank in the night. Destroyers managed to remove the 90% of its crew.

So it turned out that the British, having made a bet on speed and firepower (the best defense is attack), ended up on the seabed. German battlecruisers were able to withstand more hits and as a result destroy the enemy.

It is noteworthy that in the grand meat grinder Jutland not a single super-dreadnought was killed. Slower, but much better protected battleships, however hard they tried, could not destroy each other. The British “Worspite” received 13 280-mm German projectile hits (equivalent to 305 mm), and the total number of holes he shattered from close blasts and smaller-caliber shells was 150. Despite the hells being shot, the “Worspite” remained in the ranks, and the losses of its crew amounted to 14 killed, 16 injured (of the 1100 aboard). He will set the heat to the Germans in World War II. 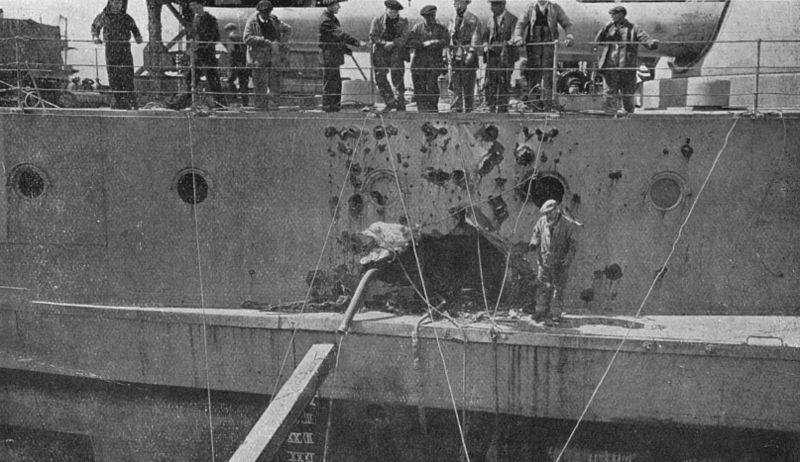 As for the battle cruiser “Hood”, there is nothing shameful about his death. Linear cruiser early 20's. clashed with a high-speed battleship of the late generation. The 76 mm deck could not bear the blow of the 380-mm yubersnaryad.

Death from a height

Aviation bombed battleships a lot and often. And only once she managed to “stick up” a heavy ship and put it to the bottom. This ship was the Italian Roma.

It is much less known that two bombs fell in the “Roma”. The second blow came in the area of ​​the engine room, where the ammunition cellars were detonated from the outbreak of fire. Why "macaroni" did not extinguish the fire? There is no consensus. According to one of the versions, the demoralized crew left the fighting posts. For the Italians, the war has already ended - the battleship was going to surrender to Malta.

The third little-known fact: on the same day “Fritz” got into the same type “Littorio”. The battleship flinched and ... exploded. Safely reached Malta, where he went to Egypt.

The third was the “Worspite” mentioned in the article, in which a pair of Fritsev landed (a direct hit and an 300 explosion kg of explosives at the side). The explosions did not add to his beauty, “Worspite” lost his turn. Only good news was that the crew’s irretrievable loss was 9 seafarers (0,8%). Six months later, the renovated battleship first opened fire on the fortifications in Normandy. 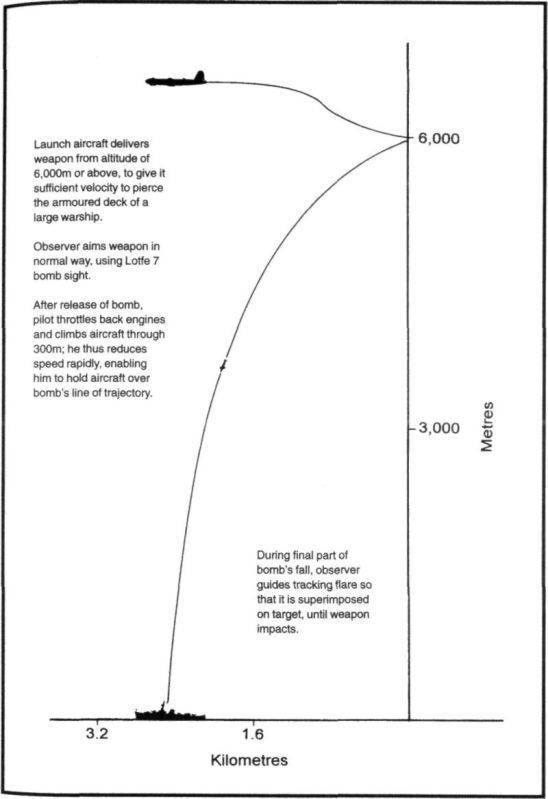 The Fritz X Superbomb is the equivalent of 460-mm art. projectile. With a length of more than three meters, it had a mass of 1362 kg. The thickness of the walls in the ogival part - 15 cm steel. The mass of explosives - 300 kg. Thanks to the “Fritz” radio correction, falling from a height of 6 km, it developed the transonic speed (280 m / s) and had the opportunity to get into a moving ship.

During the Spice bombing, two armor-piercing bombs dropped by Flying Fortresses were moored at the wall of the Vittorio Veneto LK. According to its characteristics, these “blanks” corresponded to the German “Fritz” (mass one ton, height of discharge 4-6 km). The attack had no result. The battleship was repaired in a month.

In total for the entire war, the Italian LC “Roma” became the only casual victim of bomber aviation. The exception confirmed the general rule: it is almost impossible to destroy a large highly protected ship with an air bomb.

“But what about Tirpitz, Marat and Arizona?” - skeptics exclaim indignantly. And they will be wrong.

All the above examples are so disgusting that a reminder of them gives a completely opposite result.

“Hyuga” - A battlecruiser launched at the end of the war in the 4 category, received 10 + direct hits and many close breaks during the bombardment of the naval forces of Kure 1945 in July. It sank in shallow water from numerous leaks in its hull.

“Ise” 24 July 1945 received five hits. Four days later, during the 9 hourly bombardment of Kure, eleven 1000-fnl got into the battleship. bombs dropped by multi-purpose fighters "Corsair". Ship in exhaustion sank to the bottom.

“Harun” He suffered the fate of “Hyuga” and “Ise”. Nine hits bombs. 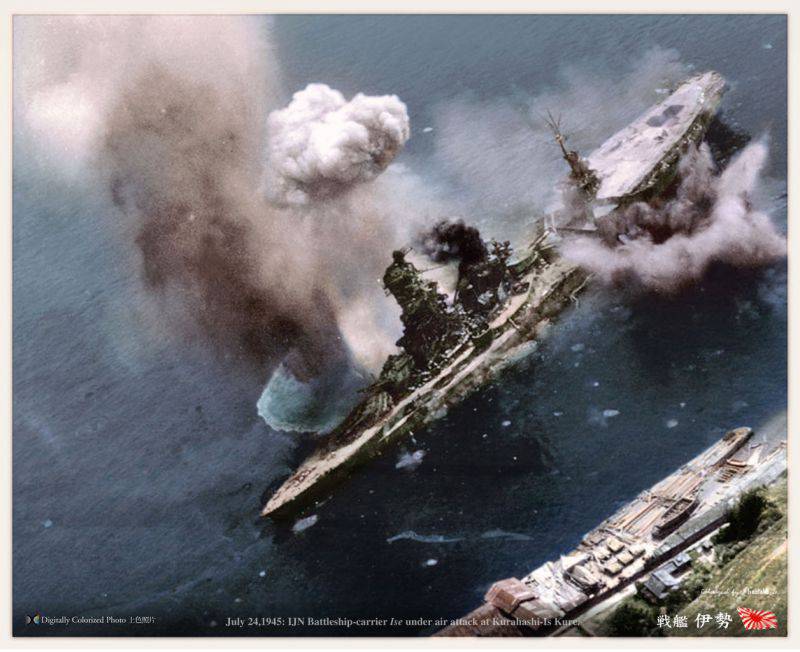 "Arizona". The horizontal booking of the dreadnought of the 1915 of the year was not difficult for the 800-kg bomb converted from the 356 mm armor-piercing projectile. While "Arizona" was the only one of the battleships of Pearl Harbor, sunk in this way.

“Marat”. There is not a single parameter by which it can be seriously compared with battleships of the later period. Break the 30-mm deck - das ist niht bezonders.

All of them were sunk in the bases. All except “Tirpitz” were rusting buckets built at the turn of the century. At the time of their death, the Japanese ships were wounded in battle and left hundreds of thousands of fire miles astern.

Still, for their destruction had to use an impressive amount of ammunition. Under normal conditions, in the open sea, with the presence of modern air defense, it would be impossible to repeat these results.

The only chance is to destroy the hull below the waterline.

In the years of the Second World War, 24 battleships were hit by torpedo strikes (despite the fact that “they didn’t fight and stood the whole war in the bases”).

And only twice in the war was a single torpedo able to cause serious damage. The wedged Bismarck steering wheel and bent propeller shafts of the LC Richelieu. While the details of the incident in Dakar remain a mystery. The French battleship and the British aircraft carrier were anchored. In the morning the British raised a squadron and attacked “Richelieu”. On the night before the torpedo attack, they scattered depth charges around the 15 battleship, and the torpedo warhead blast probably initiated the detonation of the charges lying at the bottom. The effect of the explosion was further enhanced by the shallow depth of the bay.

Just a couple of cases, of which one is clearly inadequate, against the backdrop of dozens of naval battles of World War II. And then the “eksperty” on the example of “Bismarck” will prove the failure of large warships. Of course, they simply do not know about other cases.

Of the 24 episodes mentioned, 13 ended in a shipwreck. Death always came from two reasons. The first is the lack of anti-torpedo protection (Congo, Fuso, Barham, Royal Oak, Republics, Oklahoma, Nevada, California, V. Virginia). All these were the dreadnoughts of the First World War, the creators of which did not suspect the rapid evolution of submarines and torpedo bombers. 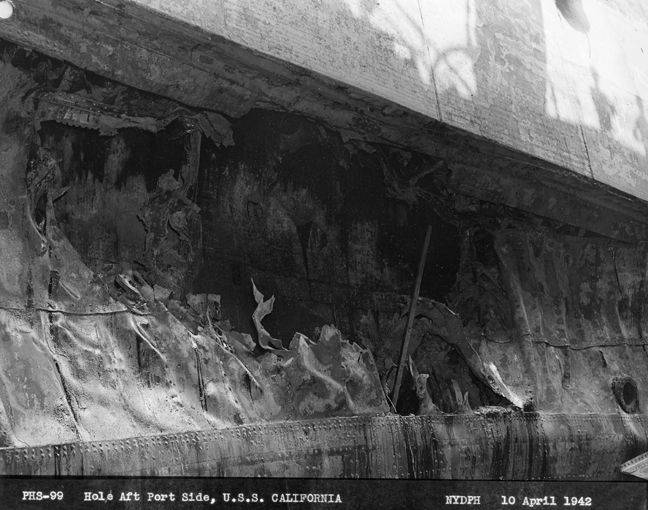 The reader will probably ask - how did Nevada, California and V. fall into the list of the dead? Virginia ”who were repaired and returned to service? Without going into much detail, we note that those Pearl Harbor victims received serious injuries and lay on the ground (stranded). Diver sent for inspection “V. Virginia ”(7 torpedo hits) passed through a hole without noticing the body of the battleship. According to legend, the hopeless ship was restored only because the former commander of the battleship was among the command of the base.

At this lyrical digression ends and again goes hard statistics.

The second group of battleships died from a completely wild number of torpedoes fired at them. “Scharnhorst” - 11 hits. “Musashi” - 20. For sinking the Japanese giants had to use the whole air army. According to the testimony of participants in those events, the position of “Musashi” became hopeless only after the sixth torpedo hit. And this is only because the attacks continued, and the capabilities of its PTZ and counter-flood systems were practically exhausted. Hordes of planes stoked “Musashi” for 9 hours. And he resisted to the last and continued to crawl under its own power. Great ship.

The death of the Prince of Wales LC (3 torpedoes) stands apart. The weakest battleships of the late period had a clearly insufficient PTZ, for which he paid. To top it all off, the explosion of the second torpedo bent the propeller shaft. Revolving, he “stirred” the entire feed part, accelerating the flow of water.

At the same time, little-known incidents with “Littorio”, “Vittorio Veneto”, “North Caroline”, “Yamato” (meeting with the submarine “Skate” in 1943) showed the obvious. A large and durable ship with a well-developed PTZ cannot be disabled by hitting one or two torpedoes. The consequence will be only a slight decrease in combat effectiveness, and on returning to the base - short-term repairs (from several weeks to a couple of months).

Against the background of such statistics, the example of damage to the “Bismarck” looks unconvincing.

Epilogue. The author sincerely hopes that this material was interesting to everyone who is fond of the naval theme. The indicated facts give a fundamentally different shade. stories about “Bismarck and whatnot” and “ingloriously lost Yamato”. The main conclusion is this: it was necessary to make incredible efforts to neutralize large, well-protected ships.

Occasionally, problems arose for those in whose design the threats of the new time were not fully taken into account. Those who were built later turned out to be practically indestructible in the usual ways. 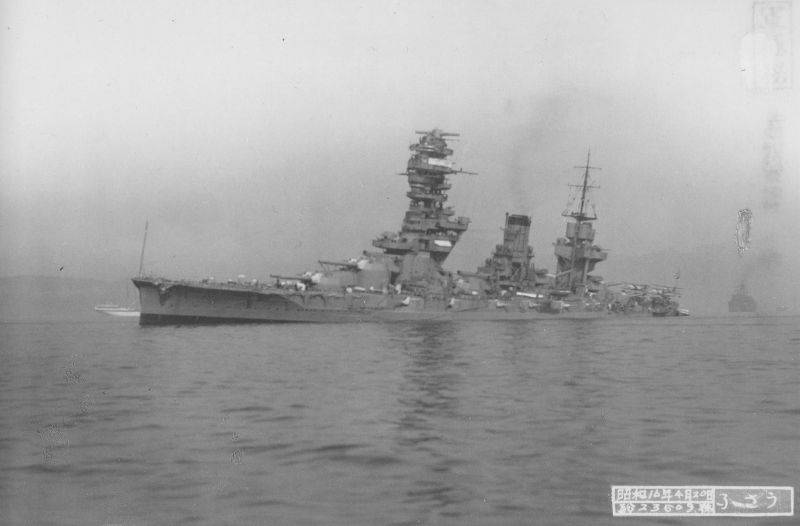 Tests of the anti-flooding system of the battleship Fuso, naval base Kure, April 1941

Ctrl Enter
Noticed oshЫbku Highlight text and press. Ctrl + Enter
We are
The cruisers of the 68 bis project: the Sverdlov missions in the post-war fleet of the USSR. 3 part"Svetlana". History of creation
Military Reviewin Yandex News
Military Reviewin Google News
164 comments
Information
Dear reader, to leave comments on the publication, you must to register.