November 30 2015
18
Immediately after the Nazi German attack, the Soviet Union began evacuating industrial enterprises to safe areas of the country. The result of this was the deployment of production facilities in new places, which allowed them to save the company from the capture of the enemy. Nevertheless, despite the evacuation, some enterprises continued to work until the approach of the enemy. Moreover, in such conditions, some factories even created new military equipment projects. A vivid example of this is the Red Star armored car.


In October 1941, the Kolomna Locomotive Plant named after V. Kuibyshev was evacuated. In the old place there were only some employees who, using the available equipment, continued to work. In December, the plant was given a new task: it was supposed to carry out repairs tanks HF, as well as tank diesel engines V-2K. Due to the specifics of damage to the armored vehicles, a certain stock of tank spare parts and assemblies that could be used in tank repairs or in the construction of new equipment soon accumulated at the enterprise. In December of that year, it was decided to use this stock for the construction of a completely new armored car.

Shortly after the start of repair of armored vehicles, Kolomna specialists proposed to develop a project for an armored rail vehicle with tank armament. The capabilities of the plant allowed the construction of similar equipment, and the accumulated stock of parts opened up good prospects in terms of weapons. Using the existing armored towers and engines, it was possible to build real railway tanks. The project of such a technique was named “Red Star”. 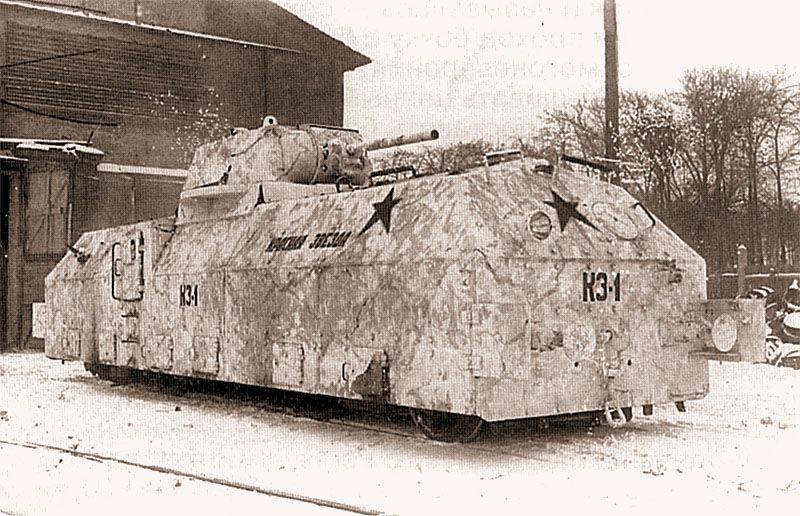 The prototype of the "Red Star" at the Kolomna Locomotive Plant. Photo Alternalhistory.org.ua

The project "Red Star" was developed under the leadership of designer Lev Sergeyevich Lebedyansky. This engineer had extensive experience in the development of locomotive technology, and in the prewar period he was involved in the creation of railway armored vehicles. Lebedyansky and his colleagues decided to use the existing experience in a new armored vehicle project on a railway line.

When creating promising armored cars, engineers of the Kolomna plant had to face a number of serious difficulties. They had to use only those components and assemblies that could be obtained in the current situation or manufactured using the machine tools remaining at the factory. It should be noted that it was the reduced machine tool park that led to the appearance of non-standard layout of the machine. Not being able to produce some parts, the authors of the project were forced to resort to unusual compromise solutions.

The basis of the design of the Krasnaya Zvezda machine was two identical carts with their own power units. Each bogie had two wheel sets and was equipped with a BNXXK B-2 engine. with transmission, and also other equipment, including a fuel and oil tank, a radiator, etc. Thus, the railcar received two engines at once. The engine was connected to the main clutch, which transmitted torque to the manual gearbox. That, in turn, was connected with onboard gears. The on-board transmissions transmitted torque to one of the wheel sets using chains. The second pair was set in motion with the help of special mechanical gears, which were connected with the first. Both truck armored vehicles had the same design and differed only by the method of installation.

The scheme of the "Red Star". Figure Otvaga2004.ru

Trucks were built on the basis of existing units with minimal use of new parts. So, diesel engine, transmission elements, fuel system, etc. were borrowed from the KV tanks. Wheel pairs, springs and other undercarriage elements, in turn, were taken from tenders of steam locomotives of the Su series. Thus, the design of the undercarriage and the power plant made it possible in the shortest possible time to master the production of new armored vehicles without the need to manufacture new complex parts.

During the evacuation, various machines, including gear-cutting machines, were taken out of Kolomna. Because of this, plant employees could not manufacture some units, including reverse gearboxes, etc. spare parts. For this reason, the railcar had to be equipped with two power plants, one of which was responsible for moving forward, the other for reverse. The original, though not the most reasonable technical solution, was forced and due to the lack of possibility of manufacturing the necessary units.

The armored body had a very simple design. Trucks connected to each other with two I-beams. They were asked to mount the frame of the corners, which should be installed armor plates. Protection options are unknown. Probably, the armor of the new rail car could protect the crew and units from rifle weapons and small-caliber artillery. 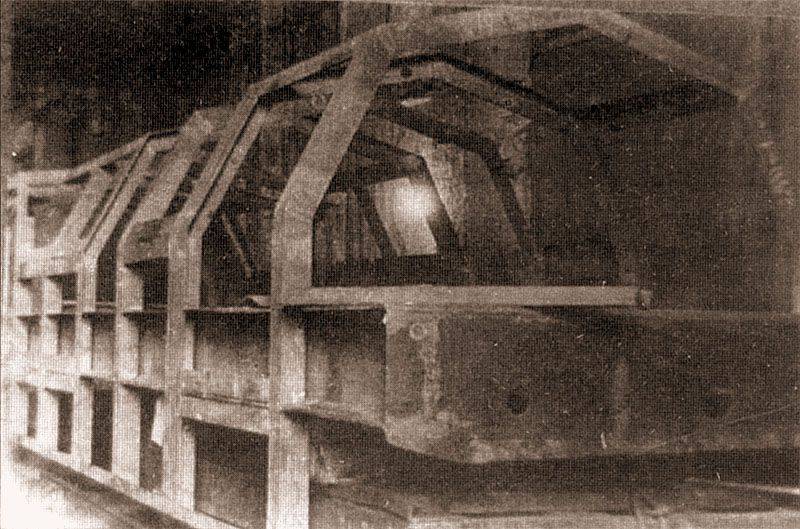 The body of the Red Star car had a characteristic faceted shape. The lower part was a rectangular armor box, the upper sheets were tilted inward and connected to a horizontal roof. On both sides of the hull, not far from the stern, there were two protruding rectangular boxes with hatches-doors for boarding the car. To simplify the design of the doors, it was decided to build up an appropriately shaped unit on the inclined upper sheets.

The driver was located in the central part of the body and could monitor the situation with a set of hatches and slots. The engine controls were borrowed from the HF tank and modified accordingly. The driver had two gear control levers and two pedals connected with the main clutches. The levers regulated the speed of movement, the pedals were responsible for putting the engine in front or reverse. On the dashboard there were devices to monitor the operation of both engines.

On the roof of the armored car positioned a box with a shoulder strap to install the tower. Kolomna Locomotive Plant was engaged in the repair of KV-type tanks, so the question of arming the Red Star was resolved quickly and simply. This combat vehicle was equipped with a turret from the KV tank without any changes in the composition of the weapons and sighting equipment. The tower used by the factory workers carried an 76-mm ZIS-5 cannon and two DT machine guns: one paired with a cannon, the second in the installation of the feeding sheet. For aiming weapons it was proposed to use the TOD-6 telescopic sight and periscopic PD-6. 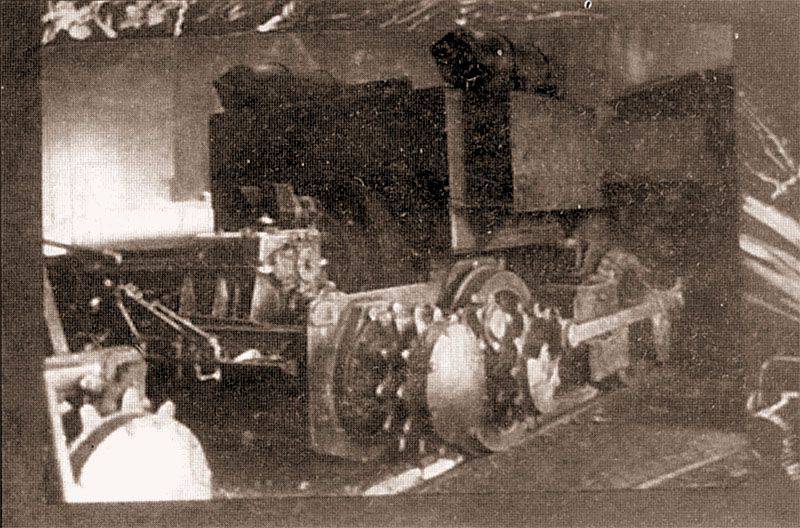 One of the carts with its own power plant. Well visible elements of the transfer. Photos Otvaga2004.ru

Additional armament machine consisted of three machine guns DT, installed in the body. Two machine guns were suggested to be mounted aft of the sides. The third was located on the anti-aircraft installation in the front of the case and in the transport position was located inside the case. Before using it, it was necessary to open the corresponding roof hatch and raise the installation to the working position. Access to three additional machine guns was provided by passes between the engines and the body.

The exact characteristics of the Red Star armored vehicles have unfortunately not been preserved. It is only known that this car could move along the railway track at speeds up to 43 km / h. The speed did not depend on the direction, which was achieved with the help of two separate engines responsible for moving forward or backward. The firing characteristics of the machine remained at the level of the tank, which “shared” its turret.

Understanding the seriousness of the situation, Kolomna engineers drafted a project as soon as possible, and then the plant workers assembled the first copy of the Red Star, which received the symbol KZ-1. From the assembly shop this armored vehicle was released in February 1942 of the year. According to some information, soon the armored car passed some tests and was soon presented to the specialists of the Armored Directorate Directorate of the Red Army.

In the cover letter to the new project, designer LS Lebedyansky noted that the Red Star project could be modernized in the future in order to simplify the design and improve performance. In particular, it was possible to use a single driving carriage equipped with an engine and a reversible gearbox. Due to this, it was possible to improve the driving characteristics of the machine, as well as to facilitate it and to release a sufficiently large volume inside the case. It could be used to increase ammunition and for other purposes. Another way to upgrade was to use an updated reservation made from curved and inclined sheets. 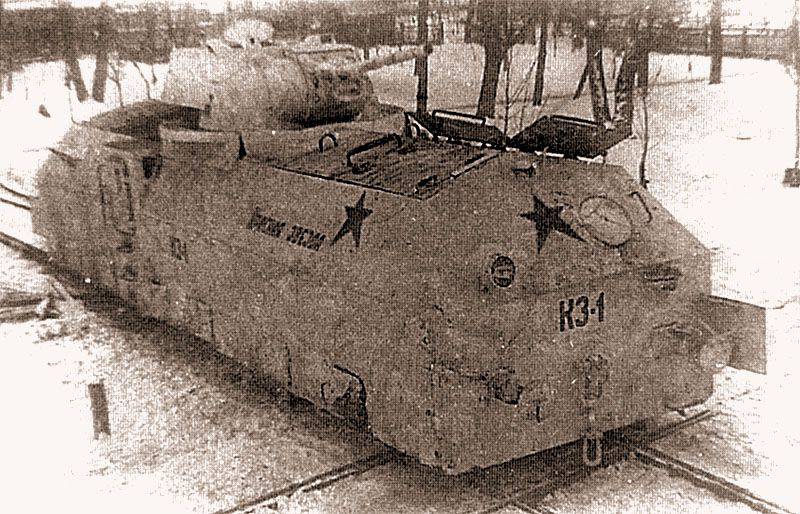 Employees of the Armored Vehicle Directorate saw for the first time a new railway armored vehicle in March 1942. Motor vehicle KZ-1 not interested in the army. Probably, the decision of the commission was affected by the overall complexity of the design and other drawbacks directly related to the specifics of the plant’s operation in front-line conditions. Work on the project "Red Star" were discontinued.

The further fate of the only prototype of a promising armored car is unknown. Apparently, he was soon dismantled, and the released units were used in the repair of new heavy tanks delivered to the factory. The machine "Red Star" did not go into the series, and also did not participate in the battles. Moreover, she probably did not even have time to pass the full cycle of tests, including the test firing.

At the very end of 1941, the designers of the Kolomna Locomotive Plant under the direction of L.S. Lebedyansky attempted to create a promising railway armored vehicles with tank weapons, which could significantly increase the combat capability of the Red Army. Working in the conditions of a shortage of components and having a limited machine park, Kolomna specialists were still able to create such a combat vehicle, although they had to use not very good ideas. Despite all the setbacks, the Red Star project is an excellent example of how Soviet engineers, even under the most difficult conditions, tried to help the Red Army in the fight against the enemy. In addition, this project was one of the most interesting attempts to create a combat vehicle based on serial tank and rail vehicles.