The Red Book of Ukrainian "overwhelmed"

November 26 2015
29
More than 20 months have passed since the “great Ukrainian peremoga” on the Maidan. During this time, a whole list of local and global "successes" of the Ukrainian authorities was born. To publish the full list, of course, you will need a separate multi-volume edition, and therefore you will have to restrict yourself to a shortened list of what the Ukrainian authorities present as merit in terms of counteracting the “aggressor and occupier”. 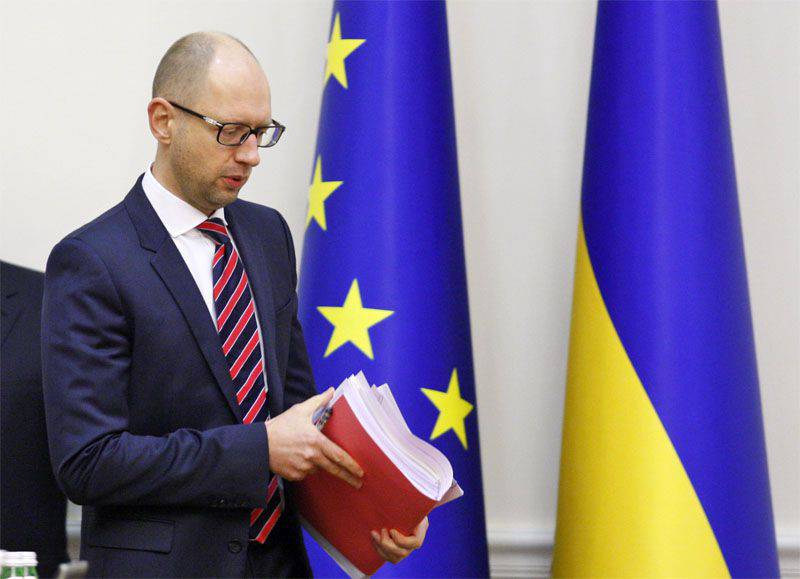 Actually, the fact that the Ukrainian authorities for the first time in stories Ukrainian statehood in the national security strategy called Russia "the aggressor and occupier," adding that Ukraine, in addition, with the "aggressor" is in a state of war. And this is probably one of the very few cases in history when the authorities of one state declare war against another state, continuing not only to buy oil, gas, coal, food, services from the “enemy”, but also with a screech in their voices demand from the "enemy" all this discounts.

Ukrainian authorities are on the broad road of Euro-Association and European Integration. These processes are so successful that, after more than 10 months after the smoke dispersed on Maidan and Institutsky, the likelihood of visa cancellation for Ukrainian citizens by the European Union countries was less than it was before the signing of the “saving” association agreement with the EU. Europe, having seen enough of the flows of refugees from Syria, Libya, Somalia, Eritrea, Yemen and other countries of the “victorious democracy”, decided that only the Ukrainians did not have enough for the European Union ...

The development of the Euro-Association process also fits in with this point - the introduction of the economic part of the agreement on 1 in January, 2016, through which the European Union hoped to fill up the Russian and Eurasian Union markets with its goods without duties, hoping that Ukraine is in the CIS free trade . But with 1 in January, Russia cancels the duty-free importation of goods from the “Square” territory and in addition is going to introduce a food embargo, which will automatically strike at Ukrainian producers in the amount of at least 600 million dollars annually (estimate, by the way, the Ukrainian Cabinet). And, rejoicing that the “Square” will not have previous trade contacts with Russia, the same government has not explained to its citizens, but with what, in fact, the market, it will replace the Russian market for Ukrainian producers. Perhaps the market of Luxembourg? ..

The fence ... That is, excuse me, “European shaft” by Arseniy Yatsenyuk. The total cost of the project, which, judging by the statements of the Ukrainian prime minister, should “restrain Russia's aggressive proclivities against Europe”, is about 8 billion hryvnia. The project itself must be completed in 2018 year. According to Yatsenyuk, "construction" is already ahead of schedule ... Apparently, therefore, residents of the Sumy and Chernihiv regions drag fragments of the mesh fence to their country and household plots, so that the rate of "over-fulfillment of plans" is not going too far ... of funds by the Ukrainian oligarchy will fail, which is the main concern for today's Ukraine.

In order not to depend on Russian gas, the Prime Minister of Ukraine literally turned to the leadership of Naftogaz and, in an orderly manner, demanded to stop buying blue fuel from Russia.

Yatsenyuk on the eve of:
The Cabinet decided to instruct Naftogaz to stop buying Russian gas. And then they (Russia) got confused: it’s not they who stopped supplying gas to us, we stopped buying it.

However, against the background of this peremoga obvious to every svidomite, an unforeseen zrada arose. And from whom? From the one to whom Yatsenyuk gave his commanding order to stop gas purchases from the “eastern neighbor”. The management of NAK Naftogaz issued a statement saying that as early as next week negotiations could be held with the Russian side on the price of gas for the first quarter of 2016 of the year. At the same time, Naftogaz explained that the main parameters of the agreement with Gazprom are, and they concern joint actions for the period up to March 31 of next year, it remains to agree on the details.

For some reason, Yatsenyuk did not comment on such a message from the management of Naftogaz ... And it’s true that there’s no comment even if a person very far from the energy sector of Ukraine understands: Ukraine simply cannot by definition completely refuse to buy gas from the Russian Federation. Indeed, in this case, it is necessary either to steal gas from a pipe through which it flows into Europe, which will strike, if possible, the so-called “reverse” from Europe to Ukraine; or to get into UGS facilities, which also will not allow to pump gas to European partners in due quantities. And partners who have already paid for gas supplies from Russia will be, to put it mildly, dissatisfied with the fact that gas is “lost” somewhere in the expanses of the “most independent in the world” state ...

The Ukrainian Cabinet of Ministers decided to “ban” the aircraft of Russian airlines from making transit flights through Ukrainian airspace. It is worth noting here that Peremoga, according to which a mutual ban on flights to each other is in effect, was obtained earlier. Now - and transit ...

From such peremoga they are perplexed in Rosaviation. The fact is that the department does not quite understand how it is possible for airlines to forbid flying over the territory of Ukraine if all self-respecting airlines after the tragedy with MH-17 try to fly around this particular part of the land. So, at the time of preparing the material using the site data www.flightradar24.com managed to find out that only 2 of Russian (apparently very risky) aircraft of the charter carrier flew over the territory of Ukraine I-fly on the route Moscow-Antalya and companies S7 on the route Chisinau-Moscow. 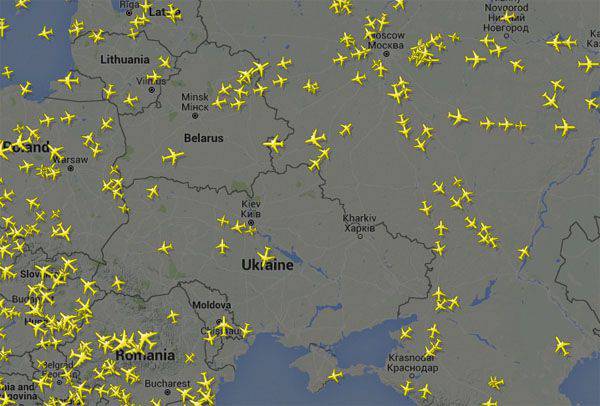 The “screenshot” from the above site shows that Ukraine on the flight map is similar to a large gray spot, which the leading air carriers of both Russia and Europe have long refused to transit through.

And how much more was Peremogh mined by Kiev ... These are the denunciations of various contracts ever concluded between Ukraine and Russia, which the current ukrovlasti found in the drawers of the table, inherited by state inheritance. This is an energy blockade of the Crimea, which, finally, will spur on the acceleration of the process of creating an energy bridge from the Krasnodar Territory to the Crimean peninsula. This is a statement that a moratorium on the payment of public debt to Moscow will be announced. This is “de-Sovietization”, in which, for example, Voroshilov’s streets change their name and become streets ... Voroshilova, but not in honor of Voroshilov, but in honor of a completely different Voroshilov ... This is, after all, a slate revolution that turned out to be so successful that all leading investors quickly fled from the territory of Ukraine, realizing that the proper volume of shale is something ...

A complete list of Peremog of Ukraine can be found by overpowering oneself by turning to the Ukrainian media and Mr. Yatsenyuk’s Facebook page.

Ctrl Enter
Noticed oshЫbku Highlight text and press. Ctrl + Enter
We are
Results of the week. "And both, and can be without bread"Situational analysis of the death of the MH17 flight (Malaysian Boeing 777), made on the basis of engineering analysis from 15.08.2014
Military Reviewin Yandex News
Military Reviewin Google News
29 comments
Information
Dear reader, to leave comments on the publication, you must to register.