Hallstatt and La Ten: on the verge between bronze and iron. (Part of 1)

November 27 2015
23
Before we talk about how the bronze age in Europe was replaced by the iron one, it is necessary to “transfer” to the territory of ... Ancient Assyria, the kingdom, which is considered to be the first empire in the world. Naturally, she was surrounded by certain states and in one of them, the state of Urartu, was introduced to us in Soviet times in the fifth grade of secondary school, with the oldest state on the territory of the USSR. Now this territory is not included in Russia, but by itself история Urartu from this has not changed at all. To the east of it was the Hatti area and that’s where the Russian historian S.A. Nefedov people and learned for the first time to receive and process scatter iron. From them, this technology was first borrowed by the urarts. During the reign of King Urartu Argishti I (around 780), the Urartu army received iron swords, iron helmets and armors made of iron plates or scales, sewn onto clothing, and, overtaking the neighboring powers in this regard, Assyria itself was threatened. Naturally, the Assyrians tried to adopt the novelty, and adopted it. After all, something that, and everything that concerns weapons, people adopt each other instantly.

The end of the Bronze Age was marked by the appearance of bronze daggers of amazing beauty and perfection. It should be noted that its handle is cast in one piece with the blade, but by virtue of tradition it repeats the design of daggers and swords with wooden handles that were attached to the blade on rivets. From the collection of Georges Hasse. At the moment in Antwerp in the repositories of the museum "Het Vleeshuis".

In the graves on the island of Crete also found two fragments of the scoured iron, dating from the XIX century. BC. And at the end of the II millennium BC some iron objects are found in Europe. We emphasize - separate, as well as individual iron objects that were found in the tomb of Tutankhamen. As for the large-scale production of iron and its processing — that is, the iron industry itself — for the first time became widespread in Greece and on the islands of the Aegean Sea. When it was? Around 1000 BC, as confirmed by archaeological finds. Then the iron-making industry in Southern Italy was brought by Greek colonists around 800 BC. 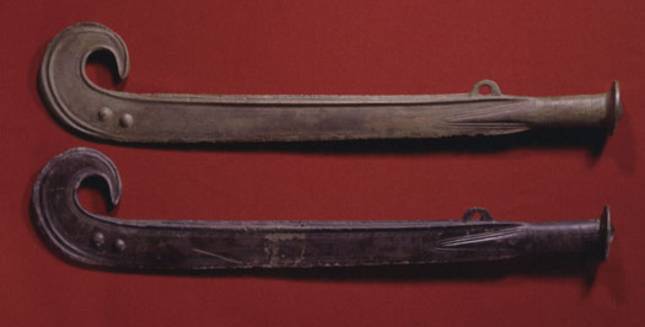 Well, in the temperate zone of Europe, in the Eastern Alps and surrounding areas, it appeared around 700 BC. Moreover, iron in the economy of European tribes for a long time played a rather limited role. And even in 500 year BC. er iron things were still rare here. There were also areas where copper ores were abundant, which restrained the spread of iron. For example, in the same Egypt, the competition between bronze and iron continued until the VI century BC. Oe., and the nomadic peoples of Kazakhstan and Central Asia, who also used their rich copper ore deposits, began to use iron only in the middle of the 1st millennium BC. er 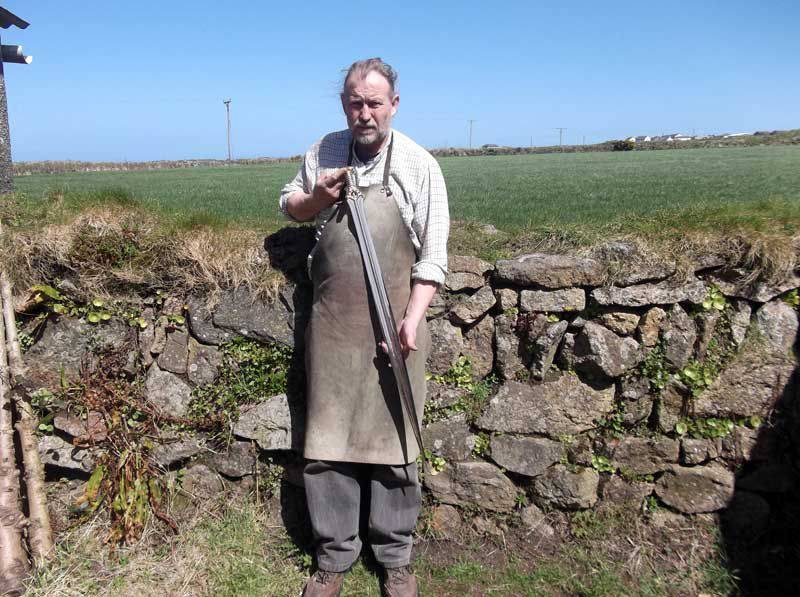 Neal Burridge (about which we have already told in the materials about the Trojan War) also specializes in Hallstatt swords and makes them to order.

Well, now, having become acquainted with the ways iron got into Europe, let's see how it spread here. Let's start with chronology: two periods of its distribution can be distinguished in Western Europe: Hallstatt (900 - 500 BC) and Latina (500 BC - the beginning of our era).

Well, the archaeological finds of the Iron Age in Europe can already be associated with the European nations mentioned in written monuments: in the north - the Germans, in the east - the Slavs and Illyrians, in the southeast - the Thracians, the peoples of the Apenninsky Peninsula in the south, and finally Celts - in Western and Central Europe.

The sword "tongue carp" - a blade with a shank at the handle.

Sword "tongue carp" from France. The original is one of the few complete bronze European swords in a scabbard. Length xnumx see

Let's start with the Hallstatt culture, named after the burial ground, excavated near the city. Hallstatt is a city in southwestern Austria. Digging in the area began in 1846 - 1864. and before the beginning of the 20th century, about two thousand burials were opened here. And this is not surprising: after all, the time when the departed was buried here, takes a whole epoch: something around 350 years (750 - 400 years BC). However, this is not surprising. Well, people lived here for several centuries and lived, especially since there were also deposits of rock salt and, apparently, to extract salt and sell it was their business. Surprisingly, about 45% of all graves are burials with cremation, that is, they belong to the era of “burial urns fields”. 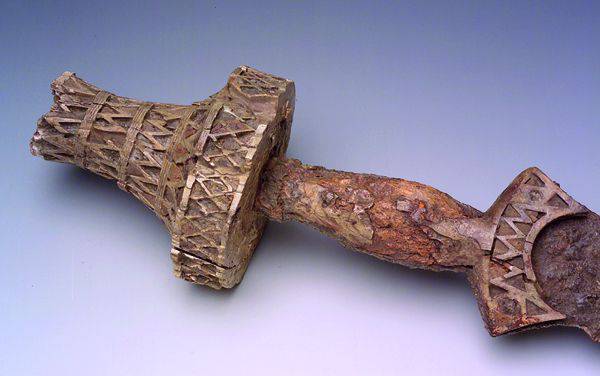 The handle of the iron sword of the Hallstatt culture of ivory with topping of amber. Austria. Around 650 - 500 BC. Military Historical Museum of Vienna.

But in the rest of the graves they find elongated corpses (usually with the head turned to the west, that is, “at sunset”). At the same time, both those rites and other rites were performed during the burial of both sexes, and not, let's say, as such - for men only, burning or only for women. The only thing in which the difference was noticed was the wealth of the grave goods. Deaths in this plan are richer and there are more men in them. Another difference: the inventory of corpses does not contain weapons. The deceased was burned not at the place of burial (remnants of fireplaces were not found!), But somewhere else (“in the local crematorium”!).

Under this hill was the famous Hochdorf Tomb. And what was found inside?

Well, the charred bone remains were either piled on the ground, or on stones, or piled up in a clay container or a bronze vessel. Then all this was buried at a depth of 1 - 1,5 m. There are graves surrounded by a circle of stones and covered with stones from above. Together with the dead that lie in these strange Hallstatt graves, found a lot of bronze and iron weapons, as well as bronze utensils and jewelry. 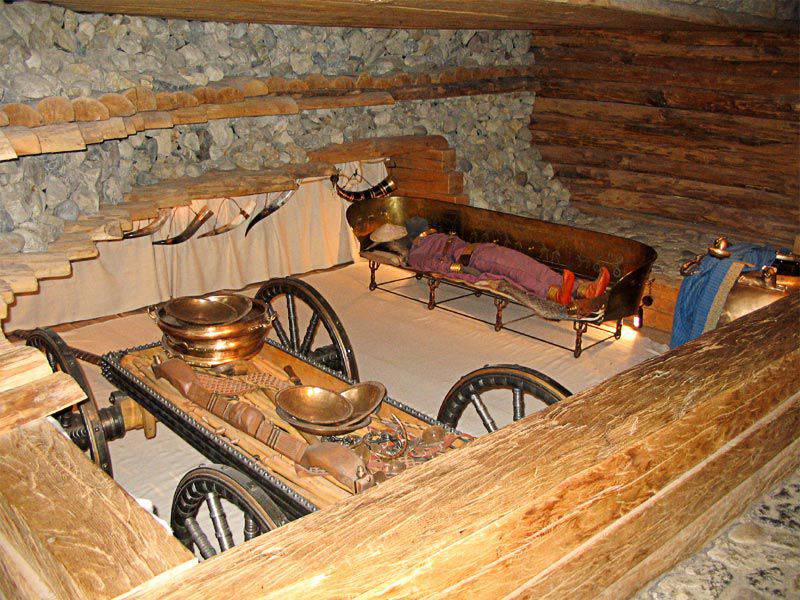 Hochdorf Tomb, Germany. Around 530 BC. Considered as "the Celtic tomb of Tutankhamen." It was discovered in 1977 year near Hochdorf in Baden-Württemberg, Germany. A man 40 was buried in it, 187 was a man of height, who was placed on a bronze sofa. The clothes are richly decorated with gold, on the hands of gold bracelets. Near the sofa was placed a large cauldron with figures of lions around the edges. There was a four-wheeled cart with a set of bronze dishes in the tomb - enough to serve nine people. (Historical Museum of Bern).

As for the latent culture, it became known to science in the second half of the nineteenth century. and was named after the Swiss village of La Ten on the lake Neuchâtel. In 1872, the archaeologist G. Hildebrand called the “Latens of the Age” and designated the “Second Iron Age”, following the “First Iron Age” —that is, the “Hallstatt Era”. At the same time, the second Iron Age in Europe was clearly more perfect than the first, since in the Late time, tools and weapons from bronze ceased to meet! 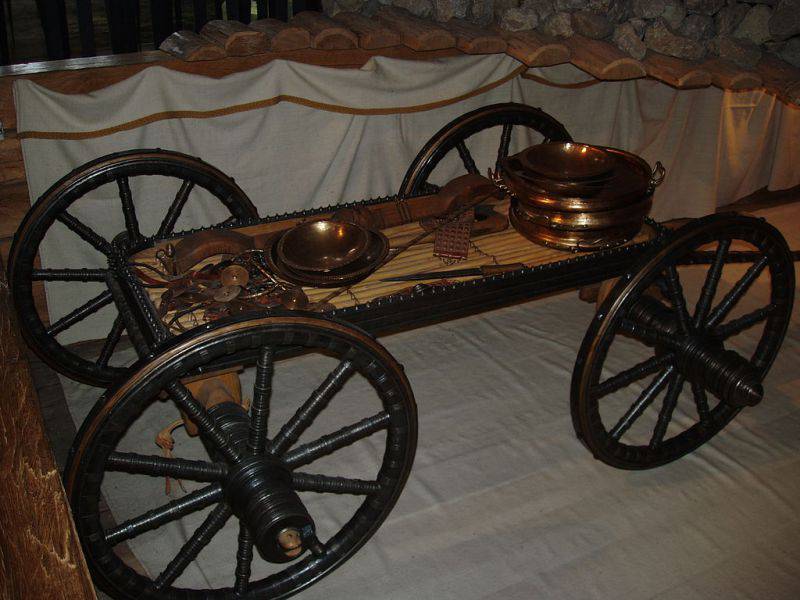 A cart with dishes.

Where did the representatives of Hallstatt culture live? In wooden log houses and semi earths. The usual type of settlement is a village that had the correct layout of streets, not too heavily fortified. Known and piling settlements, that is, people of this culture were much fiction. Salt mines of Hallstatt, copper mines, where they mined copper ore, iron-smelting workshops and forges were discovered.

Characteristic objects of the Hallstatt culture are bronze and iron swords with a handle, the top of which could have the shape of a bell or represent the similarity of the “antenna” of two volutes bent towards each other, daggers in metal sheaths, axes, iron and bronze spearheads. 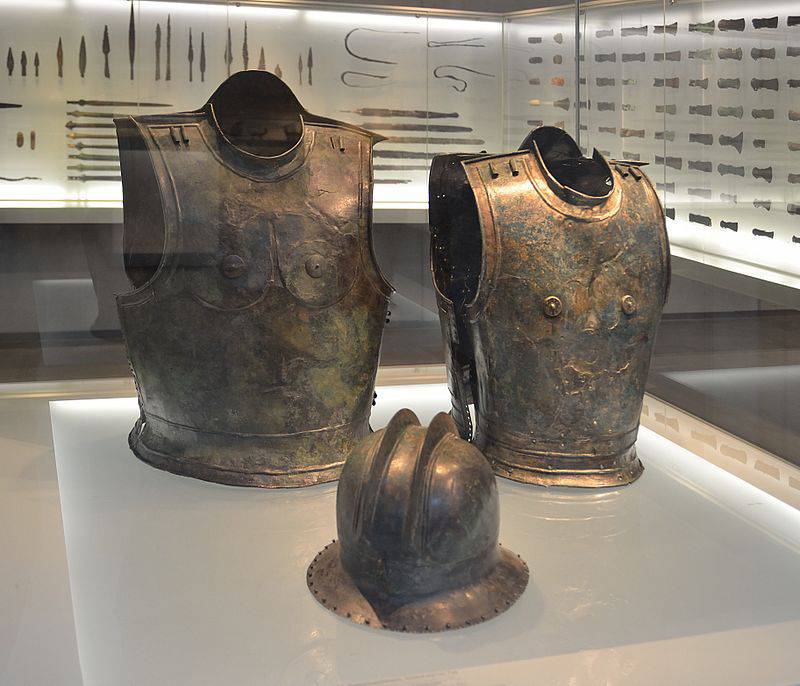 Two "muscular" cuirass and a helmet with two combs (the first third of the VI century BC.) Found in Styria, Austria. The artifacts are located in the Archaeological Museum at Eggenberg Castle, Graz.

The protective equipment of the Hallstatts included bronze conical and hemispherical helmets, which had wide flat fields and crests on the dome, armors, both from separate bronze plates and "muscular cuirass". In the burials one can find bronze ware, original brooches, stucco ceramics and necklaces made of opaque glass. The art of the Hallstatt tribes is clearly a luxury; After all, in the burials they find a lot of jewelry made of bronze, gold, glass, bones, brooches with figures of animals, belt buckles with embossed patterns and patterns, and the dishes they also had was very beautiful: yellow or red, with polychrome, carved or stamped geometric ornament. 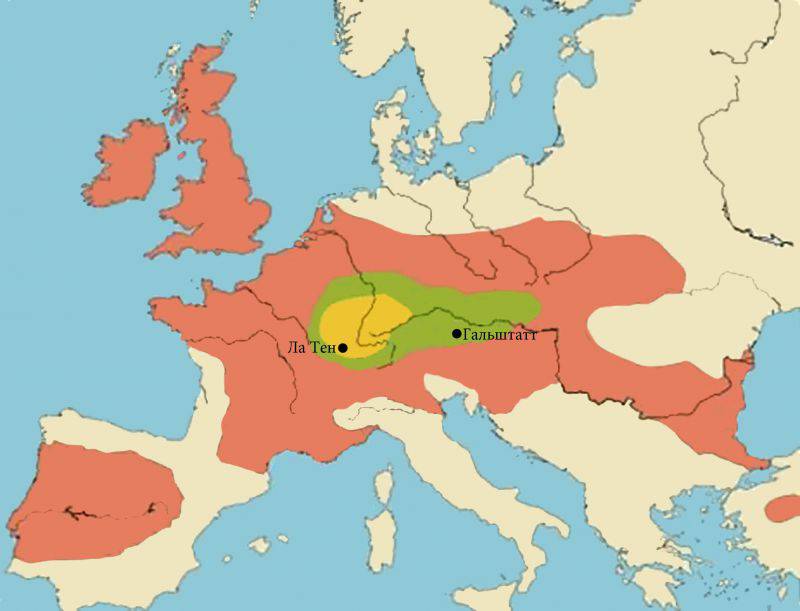 Map. Areas of Hallstatt and Latino cultures. The red color shows the territory of the maximum distribution of Celtic culture.

As for who these people were, then ... it is believed that the Hallstattans are the Proto-Celtas and, finally, the Latent culture is “the Celts in their pure form.” At the same time, there is no abyss between the Hallstatt and Laten cultures: the abundance of artifacts allows us to trace the development and modification of the same forms of tools, jewelry and weapons in both cultures.

The author is grateful to Neil Barridge (http://www.bronze-age-swords.com/in_my_workshop.htm) for the information and photos provided.

Ctrl Enter
Noticed oshЫbku Highlight text and press. Ctrl + Enter
We are
Bronze age on the island of Cyprus or "migrants are to blame for everything"! (part of 5)Weapons and armor of soldiers of the Trojan War. Swords and daggers (part one)
Military Reviewin Yandex News
Military Reviewin Google News
23 comments
Information
Dear reader, to leave comments on the publication, you must sign in.