Another round of anti-Russian hysteria

November 26 2015
180
Erdogan said that elements of the fuselage of the downed Russian Su-24 bomber fell on Turkish territory. There were also voices from across the ocean: potential US presidential candidates, as if on cue, rushed to denigrate Russia, Putin and extol Erdogan. Lindsay Graham called the destruction of the Su-24 "a good thing" and noted that Turkey "clicked Russia on the nose," and Marco Rubio once again called Putin V. a "gangster" and offered the White House to take a "hawk" response to any Russian aggression "against Turkey.


Some elements of the fuselage of the Russian Su-24M shot down by Turkey fell on Turkish territory, Turkish President Tayyip Erdogan said in Istanbul, reports TASS.

Here is Erdogan’s short story about the November 24 2015 incident: “Yesterday, two unidentified aircraft violated our airspace. Within five minutes they received ten warnings. After that, one of them returned to Syria, and the other continued to break. After that, our F-16 opened fire and shot him down. Later it turned out that the plane belonged to the Russian Federation. Some parts of it fell on Turkish territory and wounded two citizens. ”

Earlier, a statement at the NATO level followed. From the secretary general himself. We bring it on the original source - English language website North Atlantic Alliance.

After Ankara "informed the Allies" about the downed Russian military plane that violated Turkish airspace, the Secretary General expressed his concerns about the consequences of the military actions of Russia "within the borders of NATO."

According to Jens Stoltenberg, who spoke on the results of the emergency meeting of the Council of the North Atlantic Alliance in Brussels, it is necessary to take measures and avoid similar incidents in the future.

After this standard clerical phrase, Jens Stoltenberg suddenly declared: "As we have repeatedly made it clear, we are in solidarity with Turkey and support the territorial integrity of Turkey as our NATO ally."

The Secretary General noted that the alliance will continue to “very carefully” follow the developments on NATO’s southeastern borders.

Further, Stoltenberg said that he was waiting for “further contacts” between Ankara and Moscow and called for “calm and de-escalation”, as well as “diplomacy”.

After that, the journalists asked him questions.

The Secretary General replied that this was the "Allied Assessment." He said that the alliance “during the day” received “from several allies” information that is fully consistent with the information provided earlier by Turkey. “Thus,” he concluded, “information from other allies is consistent with what we received from Turkey.”

A reporter for the Wall Street Journal asked the general secretary about the possibility of creating an allied coalition in Syria along with Russia. "Or is the tactic too different?" But maybe the goals are too different? ”He asked, not without irony.

The NATO Secretary General has firmly declared that “the“ IG ”should be the common enemy. Personally, Stoltenberg would “welcome” all efforts to combat IS. And then he said that most of the Russian strikes in Syria were directed to areas where there was no IG.

A spokesman for Reuters asked about the contacts of NATO with the Russians or the planning of such contacts in connection with the Turkish incident.

Stoltenberg said that there were already direct contacts between Ankara and Moscow, but there was no contact between NATO and Russia. The Alliance is in contact with Ankara, which directly discussed the issue with the Russian authorities.

The Turkish incident added fuel to the fire of anti-Russian hysteria in the United States. 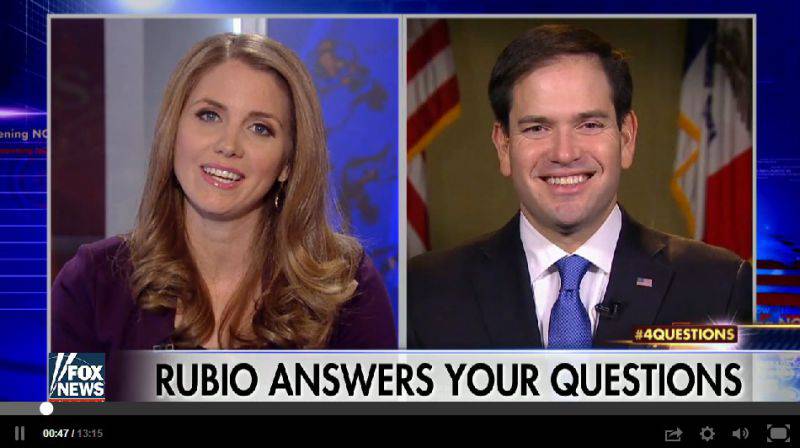 On air Fox News potential US presidential candidates (Republicans) commented on the possible military escalation between Russia and Turkey. The comments were related to the Russian bomber Su-24 shot down by a Turkish missile.

Florida Republican Senator Marco Rubio, known for his habit of political rudeness, again called Vladimir Putin a “gangster” and advised the White House to give the Russians a “hawkish” answer. The United States should give such a response to Moscow in any manifestation of “aggression” against Turkey.

The very possibility of such an American response could force Moscow to correlate probable "costs and benefits." After all, Putin is “a player in the field of geopolitics,” who makes decisions by comparing the minuses and advantages, according to Rubio.

Therefore, the Kremlin must learn that Washington is ready to fight for the defense of Turkey, a NATO partner.

Realizing that America and NATO are ready for anything, Putin will not risk "checking the alliance for strength." He understands: in such a confrontation, he “loses”, summed up Rubio.

Senator Lindsay Graham, who also spoke on the TV channel, called the destruction of the Su-24 "a good thing," and noted that Turkey deftly "clicked Russia on the nose."

Politicians like Rubio and Graham only have to announce donations from the personal funds of millions of dollars to the needs of the Islamic State. And to President Obama and Secretary of State Kerry to declare Islamist terrorists builders of democracy in Syria and Iraq and send them tons of five hundred weapons and cartridges. Senator John McCain, this "friend of the Russian people" and a lover of being photographed with bearded men on the Turkish-Syrian border, would be incredibly happy.

Observed and commented on Oleg Chuvakin
- especially for topwar.ru
Ctrl Enter
Noticed oshЫbku Highlight text and press. Ctrl + Enter
We are
Turkey and Greece. Cold War airspaceResults of the week "I do not need a Turkish coast"
Military Reviewin Yandex News
Military Reviewin Google News
180 comments
Information
Dear reader, to leave comments on the publication, you must to register.