Notes of the Colorado Cockroach. Press conference for Russian readers

November 26 2015
27
I read the comments on "Notes ..." and decided to try a completely new form of communication. It is clear that no one will present a correspondent or cameraman to me for an interview. That's why I decided to hold a press conference in one person. According to the principle of "samvsesam". Too many questions asked by readers. They probably think that I am aware of all the hidden matters in Ukraine. 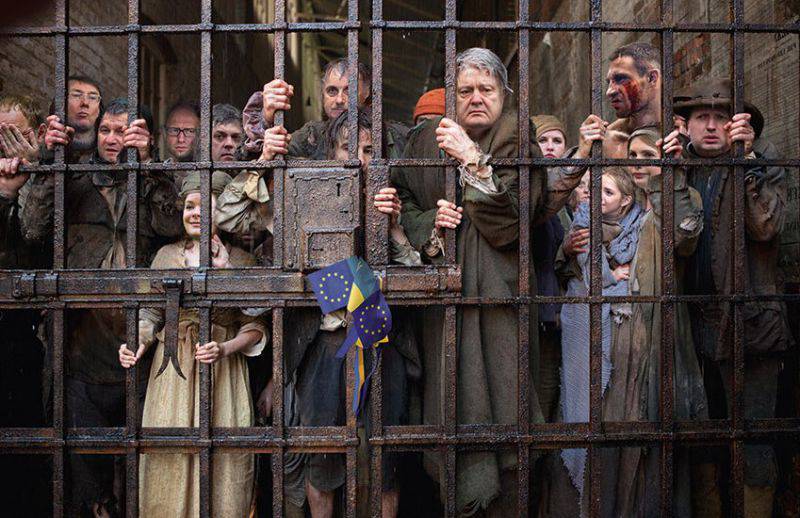 Yes, I know a lot. But imagine how many carpets in the Rada and other places. And what is the value of a cockroach. And even though my opinion expresses the opinion of some Ukrainians, it’s without any claims to the only true one. Just there are people like me. Preserved, in spite of everything. While preserved.

So, the cockroach sat down at a long table. Straightened chitin. Gleaming eyes polished Tarakanushka. And in the hall a lot of readers who are eager to ask their tricky questions. Let's start.

Question. Why do Ukrainian cockroaches reach only what their Western European friends are talking about? Why exactly the same conclusions emanating from Russia are not perceived?

K.T.'s answer You are not right. Ukrainian cockroaches are fully aware of what is happening. They fully understand the destructiveness of the policy pursued by Poroshenko and his clique. Moreover, the Ukrainian cockroaches even tried to express their opinion on this issue. I want to remind the fate of some. Like Olesya Elderberry. There were even attempts to bring people to the streets. Not to start the next maidan. Just so that the authorities hear their people.

However, the current pseudo-popular power is not like the power of the bloody dictator Yanukovich. She didn't bother almond much. The discontent was suppressed not only with the help of punitive divisions, but also with the help of fascist nationalists.

The parochial nationalists, who now rule the country, are trying to spread their peasant views to the townspeople. And I must admit, they do it in most cases. Especially in the case of youth education. Frantic nationalism and anti-Russian sentiment today for the majority of Ukrainians is the norm.

Question. Why is it so easy for Ukrainians to forget their historybetrayed their ancestors? Why is new story in fashion today?

K.T.'s answer In my opinion, what happened in Ukraine is largely determined by our mentality and the economic situation created in all the previous years in the country. Most Ukrainians are hardworking and kind people. A little mind. Yes, and "pull" what is bad, do not mind. We love our home. It is a house. And we always build it. More precisely, completing.

The economy under the previous authorities was already in preinfarction state. To earn on construction was problematic. That's why our most active and young people went to work. Who where. Someone to the West, some to Russia. Those who received good education went as far as we could. Those who had a position went.

And who was left? Only those who finished school with difficulty remained. Only those who could not build a house remained. No matter what. Have you seen a lot of people who blame themselves for their failures? Most often blame those who live better. You, in Russia, also went through this. Let me remind you how in 90 your old people treated young people rolling out foreign cars. Stole! We have worked all our lives, and we earned nothing except Zhiguli.

Now, for the most part, all radical nationalist and fascist movements consist precisely of those who blame a more successful neighbor for living better and of those who were brought up by the Ukrainian government. And these categories, unfortunately it is unfortunate to write, the story is known from the textbooks that they slipped in the school. For those textbooks that he wrote in favor. And there is simply no other story for them. There is no need to hammer head with cotton history. We have everything that does not fit into a certain format - cotton.

Question. How do you see the normalization of Ukrainian society?

K.T.'s answer Alas, but what happened in Ukraine today cannot normalize itself. Ukraine has always been a divided country. We just didn’t really advertise it. Any elections we have turned into a confrontation of the western and eastern regions. Confronting pro-Western and provostochnogo points of view. Any president automatically became a supporter of some and an opponent of others.

Currently, pro-Western politicians are in power. They do everything to tear Ukraine away from Russia. This led to the loss of the Crimea, to the uprising in the Donbas.

Today, I have little idea how it is possible to make Ukrainians on both sides forget the shed blood and destroyed houses. I'm not talking about how to return the Crimea. Any action of Ukraine in relation to these regions causes reciprocal hatred. And every day this hatred only increases.

I think that the normalization of Ukrainian society in the framework of a single Ukraine is no longer possible. The collapse of the country has actually happened. No matter what Western politicians say, the Russian president, it was not possible to save Ukraine. The question is only when it happens. I repeat, a single Ukrainian society does not exist today.

Question. Who and what forces can unite and begin the revival of the country?

K.T.'s answer They are already united. Look at the Donbass. Look at the Western Ukraine. These are practically politically ready republics. Any opposition forces in these regions will be severely suppressed by the existing authorities there. And with the approval of local residents.

We can only speak about the opposition in the regions where the Kiev authorities have so far crushed popular opinion by force. I mean the southern Ukrainian, Black Sea regions. Industrialized northeast. There it is not clear who will win. It is there that the appearance of a real opposition to Kiev is possible.

But in general, it seems to me, until the war between the oligarchs for the leading role in the economy of Ukraine stops, there’s no real rebirth. You cannot revive a country that no longer belongs to you. And Ukraine, alas, today does not belong to the people.

Question. Can the right sector do this? What is the degree of trust in PS?

K.T.'s answer I do not think. The right sector, as well as other radical organizations have already done their job. They were the scarecrow that performed the two tasks. First, they solved in a forceful way the tasks that the authorities could not solve. And, secondly, served as a sign for the people. You see, we have patriots who will always stop the presumptuous officials from the government.

The way the government actually treated and relates to the PS, showed events in Transcarpathia. It was an indicative flogging of presumptuous revolutionaries. Every cricket know your hearth. It seems to me that PS Dmitriy Yarosh, a conductor, therefore ran away from there. Political scent, if you want.

Today, Ukrainians belong to the PS exactly. Just like with other movements. That faith that was literally more recently, no longer exists. Today, many do not see the power that can withstand the government. The understanding that the revolution is devouring not only its leaders, but also ordinary people has already arrived. But it is expressed most often in kitchen conversations. No one knows how to remove Yatsenyuk. Hatred of him is growing. But Ukrainians will not find a solution to the problem on their own. Increasingly, there are calls for Americans and the EU to remove the prime minister.

Question. And why are you not fighting in the Donbas? There is a place for anyone.

K.T.'s answer This question should not be asked to me. It should be asked to those residents of Donbass who do not protect their home, but prefer to sit on the couch and run for regular humanitarian aid. I, like most readers, can count. And I can calculate the number of the LDNR army and the ratio of this number to the number of inhabitants of the region.

I do not blame anyone. Everyone chooses his life path. However, I consider that here I am more necessary. One writing, I hope, not bad, more important than hundreds of untrained clerks in the headquarters. But the fact that among my friends, those who fought in the brigades of the Brain, Demon, and others, many returned home is a fact. Returned not ordinary soldiers. Commanders returned, and in the ranks of senior officers LDNR.

By the way, even though the question was not voiced, I will answer. I do not write about the Donbass and I will not write. Every cockroach knows the place where it lives. I do not inhabit in Donetsk or Lugansk.

At this, I'm sorry, I finish writing. I don’t know if the press conference was successful, but I answered the questions honestly. As I understand it today. The remaining questions, if, of course, they are asked, I undertake to highlight in subsequent notes. In the meantime - goodbye.

And thanks for the questions in the comments. Asking, therefore, are not indifferent. It is encouraging.

Ctrl Enter
Noticed oshЫbku Highlight text and press. Ctrl + Enter
We are
Notes of the Colorado Cockroach. Between Christmas and Baptism ... chillyNotes of the Colorado Cockroach. Part of 14. Tse Europe!
Military Reviewin Yandex News
Military Reviewin Google News
27 comments
Information
Dear reader, to leave comments on the publication, you must to register.