Turkey and Russia: an Unbecoming Future

November 26 2015
112
Moscow can curtail business projects, as well as abandon military cooperation with Turkey, the Kommersant newspaper reports, citing its sources. According to an unnamed interlocutor in the presidential administration, decisions regarding Ankara can be “tough”. For example, Gazprom is going to assess the feasibility of the implementation of the Turkish Stream. The construction by Rosatom of the Akkuyu nuclear power plant in Turkey may also be in question. 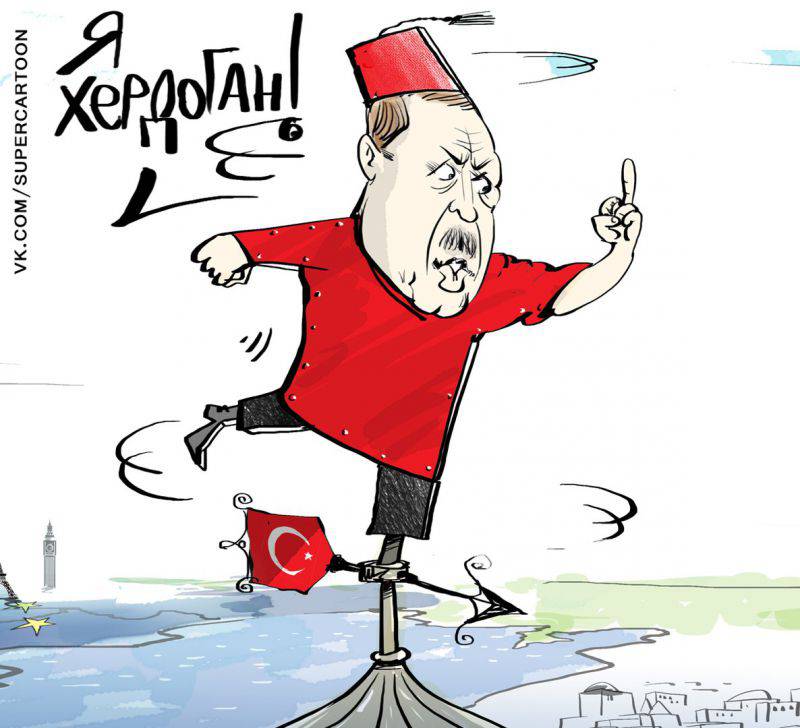 Recall, on Tuesday this week, the Russian Su-24 front bomber was hit by an air-to-air missile by a Turkish F-16 fighter. A Russian plane was flying at an altitude of 6 thousand meters at a distance of 1 km from the Turkish border. According to Vladimir Putin, the incident will have serious consequences for Russian-Turkish relations.

The president called the Turkish attack on the plane "a stab in the back by the accomplices of the terrorists."

Thus, Ankara was accused of complicity with terrorism.

Unnamed high-ranking sources told newspaper reporters Kommersant that the crisis in relations between Turkey and Russia will affect joint business projects. And the "victims" are already marked.

The probable “victim” number one is the implementation of the Turkish Stream gas pipeline project.

Number two is the construction by Rosatom of the Akkuyu nuclear power plant in Turkey.

On the Turkish side, obstacles may arise for the passage of Russian ships through the Black Sea Straits (despite the fact that such transit under international agreements can be limited only in the event of a war with Turkey).

And another victim will be tourism.

As for gas supplies to Turkey, experts polled by Kommersant doubt that this will be a "sacrifice."

A certain source in the presidential administration of the Russian Federation said that decisions would be made soon, and they would turn out to be “tough”. What are these solutions? There is no direct answer yet, since they will be finalized on the basis of expert consultations.

It is reported that an assessment of the feasibility of building the Turkish Stream will have to be given by Gazprom, which already suffered from the political uncertainty in Ankara. For Gazprom, the abolition of this “flow” means that Turkey will, as before, be supplied with gas through Ukraine. The previously made huge capex in gas pipelines in Russia for export projects through the Black Sea (the Southern Corridor) will not be used. In the "Gazprom" did not comment on the situation.

Ankara receives about 60% of gas consumed from Moscow, and it does not have other sources of this scale, the publication reminds.

Turkey does not depend on Russian oil, but it can influence its deliveries: after all, this state controls the Bosphorus and Dardanelles straits, through which also a significant part of the Russian Black Sea ports cargo flow, including the supply of Hmeymim airbase in Syria. However, a newspaper interlocutor from a large Russian state-owned company said: “The closure of the straits would be a disaster, but it’s difficult to imagine.” After all, passage through the straits is governed by the Montreux Convention of 1936.

Russia’s contract with Turkey on the construction of the Akkuyu NPP could also be at risk. The construction of the station with a capacity of 4,8 GW at the price of 22 billion dollars is the largest contract in the Rosatom portfolio. Moreover, the state corporation should become the owner of at least 51% of the station. The construction is now directly financed by the Russian Federation: the total amount of state support, reminds Kommersant, should be 93 billion rubles. The relevant agreements on the project between the Russian and Turkish parties have been concluded, a substantial part of the permits from the Turkish regulators has been received, and the complete cancellation of the project seems unlikely.

Finally, tourism. The conflict with Turkey, the newspaper writes, may result in the loss of the largest market by tour operators, and if this happens, in the very near future, tour operators will have to compensate for the failed travelers the cost of more than 40 thousands of purchased vouchers, and return more than 10 thousand people from the country.

In fact, this is not all possible "victims", we add from ourselves. There are still a number of areas that may be affected by an incident in the sky.

The volume of Russian-Turkish trade has now exceeded 31 billion dollars, and the Russian Federation is one of the largest foreign trade partners of Turkey. According to the State Statistical Office of Turkey, goods from Russia (worth $ 25,3 billion) occupied first place in the structure of Turkish imports, followed by goods from China and Germany.

Moreover, quite recently V. Putin and R. Erdogan talked about the need to increase trade turnover to 100 billion dollars a year. Now it’s hard to believe.

“Over the past ten years, the bilateral relations between Russia and Turkey have reached a very good level,” Erdogan quoted TASS. - Despite the fact that globally, some negative aspects have negatively affected the trade turnover between the two countries, there is still a positive about trade. Our goal is to reach $ 100 billion. We set ourselves such a goal to reach the 2023 year. "

What else are trading Ankara and Moscow?

As the channel indicates LifeNewsAnkara increased in 2015 year (recall the Western sanctions against Russia, which Ankara decided not to join) exports of fruits and vegetables to the Russian Federation. In January-May alone, the volume amounted to over 560 thousand tons. Turkey also offers meat, dairy products, fish and eggs - in exchange for grain from Russia.

A new round of tension can hit on investment, and that is a lot of money.

As LifeNews reminds, in 2013, investments from Russia to Turkey amounted to more than 950 million, and from Turkey to Russia - a little more than 520 million. Here both Sberbank’s purchase of Denizbank, and LUKoil’s acquisition of Akpet’s petrol stations, and the purchase by Inter RAO UES of the assets of the Grid Company of Turkey.

Who else can be touched by the new crisis in Russian-Turkish relations?

Yandex has been operating in Turkey since 2011, notes RBC.

In the summer of 2015, Yandex entered into a sponsorship contract with the Turkish Fenerbahçe football club. The most successful network projects in Turkey were Yandex.Maps and Yandex.Probki. The representative of "Yandex" refused to give the agency comments in connection with the aggravation of relations between Russia and Turkey.

The GAZ group of Oleg Deripaska with the Turkish partner Mersa Otomotiv has been assembling a Gazelle Next in Turkey since last October. The capacity of the joint venture is more than 9 thousand cars per year.

Needless to say, all this may be called into question in the event of complication of relations between the two states?

The representative of the General Staff, recalls further "RBC", said that "contacts with Turkey on a military line will be terminated." But Russia supplied the Turks anti-tank missile systems "Kornet-E", Mi-17 helicopters, armored personnel carriers. The Turks showed interest in the Russian Antey-2500 air defense system.

If we still add, in conclusion, R.T. Erdogan and his ruling party, whose title mentions “justice,” were able to maneuver between politics and economics, now it seems that the “sultan” manners of Erdogan, as well as the personal interests of some his relatives, who do not shy away from the dubious oil business in Syria, took over. Even if the "annexation" of the Crimea did not prevent the Turks from trading with Russia, including with the Crimea, and refusing to participate in the sanctions, now the economy of the whole country is relegated to the background. Apparently, the main interest of the “Sultan” Erdogan is that his son Bilal (a big fan be photographed with bearded leaders of terrorists) could continue to buy oil from smugglers "IG", filling his pockets with dollars.

It is also possible that the provocation in the sky was agreed with Washington: it’s not for nothing that the United States is carrying absurd statements about the "guilt" of Russia, which has straightened the air borders of the NATO country, and that shooting a Russian pilot in the air is an act of "self-defense" State Department Mark Toner).

One thing is clear: there will not be a single broad coalition against the “IG” in the Middle East. And this means that the “sultan” (for a couple with speaking heads from the State Department like M. Toner) himself signed his allegiance to the ideals of Islamist militants.

Observed and commented on Oleg Chuvakin
- especially for topwar.ru
Ctrl Enter
Noticed oshЫbku Highlight text and press. Ctrl + Enter
We are
"Sultan" apologizes or not? Prospects for the normalization of Russian-Turkish economic relationsThe attack on the Russian aircraft and the political situation in Turkey
Military Reviewin Yandex News
Military Reviewin Google News
112 comments
Information
Dear reader, to leave comments on the publication, you must to register.