November 27 2015
75
So, many have already written about the attack of the Turks 24.11.2015 g. On our bomber. God grant that the co-pilot was saved, as some media outlets write. But could our bomber in any way avoid the defeat of the American-made Turkish missile?


Let's compare the performance characteristics of the F-16 and the Su-24 in order to understand whether our bomber could have escaped from the Turk or offered him any opposition.

According to Wikipedia, confirmed from various sources of the Internet:

Su-24M is a modernized bomber. A new aiming and navigation system PNS-24М “Tiger” was installed. Able to automatically and semi-automatically fly over the topography of the terrain at an altitude of 50 m. 770 pcs.

In 1993, General Dynamics sold its aircraft manufacturing business to Lockheed Corporation (currently Lockheed Martin).
Due to its versatility and relatively low cost, the F-16 is the fourth-generation fighter of the last generation (2014 was built over 4540 aircraft in June) and enjoys success in the international arms market (it is in service with 25 countries, the 2014 is the most common combat aircraft in the world.

What are the chances of this bomber to counter the Turkish Air Force fighter F-16?

1. Could Su-24 get away from pursuing a Turk if, before the attack of the latter, he understood that he would be shot down? The maximum speed of the F-16 is at least 545 km / h higher than that of our bomber. The mass of our Su-24, even empty, is at least 6-7 tons more than the F-16. Given that the Su-24 returned to the base Hamine already "unloaded", then its weight was just 22300 kg. Undisturbed and afterburner in F-16 is also higher than in Su-24 - more than half. It turns out that due to the speed and combination of flight characteristics by weight, thrust-weight ratio of the aircraft and speed of the Su-24, it would not be able to oppose the same characteristics to the F-16.

2. Could Su-24 resist F-16? Considering that F-16 acted from ambush, i.e. was aimed at a surprise attack of the Su-24, waited close to the border of the flight of our aircraft, had air-to-air missiles to destroy air targets and covered Turkey’s air defense, attacked from its airspace, flying 5-6 km deep into Syrian airspace after the attack, Su-16 even had no hypothetical chance of knocking down the F-24. Whether Su-24 is armed with air-to-air missiles, he still didn’t have time, and most importantly, information about the threat of destruction from the Turkish Air Force. Just the guys did not expect such a vile and vile strike "in the back" from yesterday's "good-natured and responsive" "friends and partners." In addition, the plan for the elimination of such incidents was previously agreed upon and approved by the RF AU and a coalition of countries led by the United States. Thus, the fact of surprise and unexpectedness of the attack by the Turkish aircraft of our bomber played.

3. What actions should pilots of Turkish aircraft take in accordance with international standards and established rules of conduct for the Air Force of civilized countries? First, by radio, contact the violator of the airspace not 2 times, as stated in the Defense Ministry, but at least 20 times; secondly, fly around the intruder and make it clear by rocking the wings so that he would pay attention; thirdly, to give a turn to the fighter’s course gun over the intruder, so that he understood that he had violated the airspace of another state. Fourth, if the intruder did not leave the airspace of the country or flew too far, then force him to land on the airfield of the country that owns the airspace. What the Turks did: they violated everything, they just fired a rocket, and the aircraft of the Russian Aerospace Force, which was not in Turkish airspace, was thrown into the plane, they thought that they had been shot down over their territory, but it turned out to be a full-fledged act of aggression towards the Russian Federation in the airspace of another state, and with violation of the border of Syria by the attacker.

Could the Su-24 pilots be saved immediately after it crashed and the pilots ejected? Could, if on the base of Hmeimim there was a duty rescue unit of Mi-8 + Mi-24 helicopters (cover) with their immediate take-off (after receiving information about the fall of the Su-24) in the presence of an evacuation group and covering the landing site (as in Afghanistan) . The fact that there was no such readiness was evident, the departure was clearly delayed, and the arrival of pilots at the crash and landing site turned out to be a prepared ambush of pro-Turkish militants who had organized firing points in advance and set off attacking groups in the places where our rescuers could land.

It is impossible to predict the total, but it may be that the rescuers ’departure was timely and properly conducted, but upon arrival at the evacuation site, our landing force received such a fire defeat that when the Mi-8 was lost, the attackers’ fighters did not have enough strength and fire means for isolating the landing site and organizing firing points with a sufficient number of heavy weapons. Unfortunately, a rescue operation to evacuate the pilots from the territory occupied by the enemy cannot have a 100% positive result, but the massive use of attack helicopters to cut off the enemy’s evacuation site and destroy its fire weapons, a sufficient number of troops with heavy weapons would have a different effect.

It is easy to discuss it on the couch, but the first case shows that the lessons of Afgan should be remembered and applied. Then the evacuation of the pilots was organized in several echelons. The first arrivals assessed the situation, landed and secured. The second echelon massaged the first landing force and evacuated the wounded (and rescued if they were found), and the third wave was already heavy armed (AGS, heavy machine guns, hand grenade launchers, single machine guns, defensive hand grenades (F-1), smoke grenades, flame throwers and etc.).

The exercises conducted in recent years and sudden checks of the combat readiness of units and subunits of the Defense Ministry of the Russian Federation have a positive effect, but in combat the training is also not superfluous, and the planning of rescue operations is also necessary, as is the planning of an air offensive operation.

Implications for Turkey. The consequences have already been stated by the “sources” in the Kremlin: freezing of military cooperation, escorting bomber and attack aircraft with fighters, covering the air defense zone from the Russian cruiser Moscow, developing economic measures, terminating nuclear power plant projects in Turkey, banning tourist trips, and after returning all tourists - a complete ban in Egypt and others.

We will shoot down Turkish aircraft that violated the border of Syria. In this case, the reaction of NATO will be very harsh, even turning the hysteria up to the pre-war level.

Findings. The operation of the Russian Aerospace Forces in Syria continues, we monitor the Turks in the area of ​​the straits and the passage of Russian ships, the strengthening of NATO forces on the borders with Syria, the beginning of the offensive of the Ukrainian army in the Donbas, the shelling of the border territory of Crimea with Ukraine, the aggravation of the situation around Transnistria and much more.

Maybe it was not for nothing that Wanga before her death predicted that the black president in the United States would be the last? Maybe the year of the fire monkey will fry the yellowstone volcano of many monkeys? I hope that this fire will be of natural origin, and not of human hands as a matter of fact. 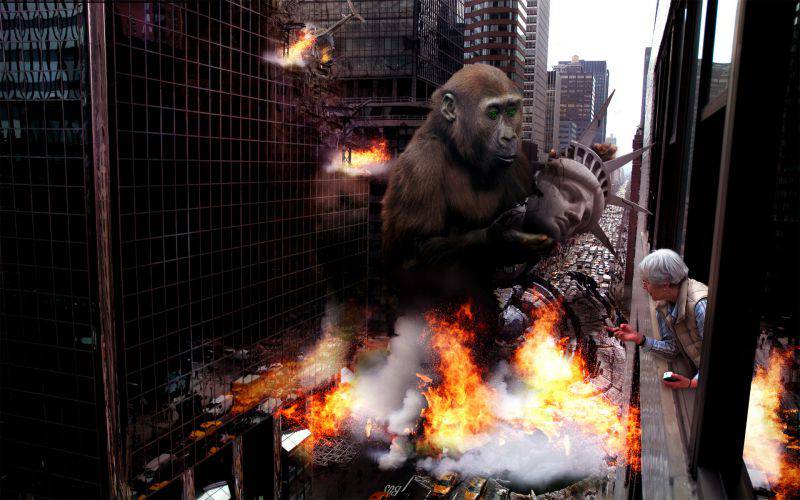 Ctrl Enter
Noticed oshЫbku Highlight text and press. Ctrl + Enter
We are
VPK LLC: production of military products. The answers"Tiger" vs "Iveco" - personal observations
75 comments
Information
Dear reader, to leave comments on the publication, you must to register.