November 25 2015
161
The Turks shot down a Russian Su-24 bomber: it allegedly violated Turkish airspace. The media reported that the Syrian soldiers managed to evacuate one of the catapulted pilots to the air base Hamim. The co-pilot was killed by fire from the ground. The United States approached this provocation flexibly: US State Department spokesman Mark Toner said that Syrian ethnic Turkmen could shoot the catapulted pilot ... in order to defend themselves. The general attitude of the West was expressed by the figure-doll - the former US ambassador to the UN, John Bolton. This Mr. advised Putin to “dump” on the plane incident, since the Russians themselves are “guilty.” 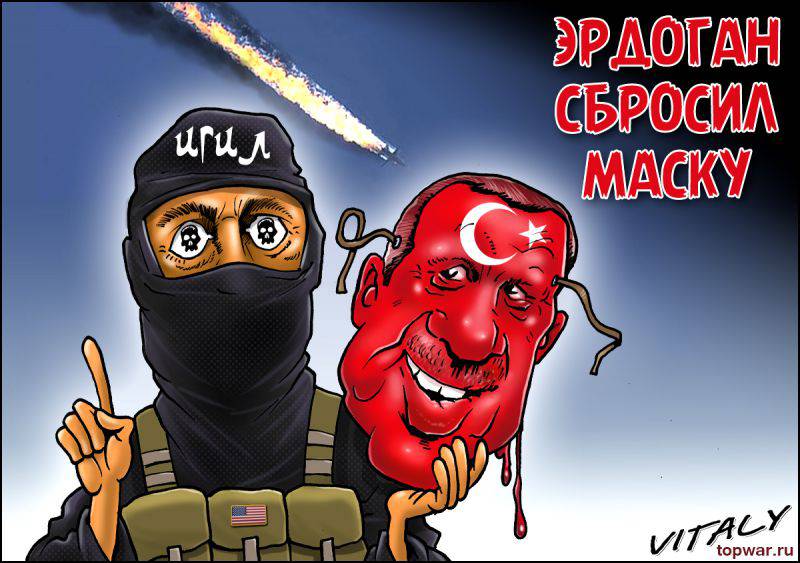 A Russian Su-24 bomber was hit on Tuesday by an air-to-air missile by a Turkish F-16 fighter. The aircraft was at an altitude of 6 thousand meters in 1 km from the Turkish border. According to Russian President Vladimir Putin, this incident will have serious consequences for Russian-Turkish relations.

“In any case, our pilots, our plane did not threaten the Turkish Republic. This is the obvious thing. They conducted operations to combat ISIS ", - quotes Putin TASS.

The president noted that the bomber operated in the mountainous part of northern Latakia, "where militants are concentrated, mainly immigrants from the Russian Federation." According to Putin, “the loss is connected with the blow that the supporters of terrorism inflicted on us in the back”.

So, the Kremlin qualified the actions of the Turkish side as aiding terrorism.

The West looks at the attack by the Turks of the Russian bomber and the subsequent shooting from the ground at the ejected pilots differently.

On this link You can read the full recording of Mark Toner's speech, one of the main official "talking heads" of the US State Department.

According to Toner (read according to the State Department and Washington in general), everything is simple: Turkey has the right to protect its airspace. In addition, this is not the first such incident with the Russians, who are not at all members of a broad coalition fighting the “IS”.

To a question from a journalist about whether the forces of ethnic Turkmen (turkoman forces) “killed two Russian pilots descending by parachute,” Toner said briefly: “Yeah.” Then the journalist said: “The forces of the Turkmen are supported by Turkey and are fighting against the Syrian government; they are part of the rebels there. Do you think these rebels are “moderately strong” in Syria? ”To this, Toner remarked that probably one Russian pilot was still not killed, as there are reports; there are “conflicting opinions” about forces.

Toner further said that if Russia attacked these Turkmen, then those “have every right to defend themselves.” But there is no complete information on this subject, he avoided a direct response from Toner.

The journalist turned out to be persistent: “And well, they have the right to shoot at pilots descending on parachutes?”

Angry Toner said in response: "We do not have a complete, clear understanding of everything that happened today, do you understand?" And he added that he is able to repeat this phrase for a whole day. “We are still trying to determine exactly what happened,” he said gently.

American authoritative magazine "Foreign Policy" believes that the downed Russian plane and the death of at least one pilot is the gravest incident between Russia and the state that is in NATO.

NATO has already arranged an "emergency meeting" in Brussels, the newspaper notes. What "measures" the alliance will take is not yet clear. According to the publication, the disaster with the Russian bomber will be a “dilemma” for Barack Obama and his allies in the anti-Igilov coalition. In addition, after the terrorist attacks in Paris, a number of NATO countries are discussing the possibility of more intensive participation in the Syrian "war in the air."

The magazine writes that the Su-24 bomber was shot down near the Syrian border. Between the Russian and Turkish officials there is a “bitter dispute” about which side he was shot down. The Turkish military also claimed that they had warned the plane for five minutes to turn around and warned “ten times”. Then came the attack, and then the "Syrian rebel group" said that its fighters fired pilots descending to the ground with parachutes.

Also, the publication reminds that the incident occurred just when tension increased between Turkey and Russia. Earlier, Ankara "expressed dissatisfaction" with the shelling of "Turkmen villages" in the north of Syria by Russian forces. On this occasion, last week, Russian Ambassador A. Charles was called "on the carpet".

Finally, the magazine reminds that in response to the actions of Russian UAVs and airplanes passing near the Turkish border, Washington sent 6 F-15 US Air Force fighters with air-to-air missiles to the Incirlik airbase in Turkey. The European command of the United States reported that the move was "a response to the request of the Turkish government for assistance in ensuring the sovereignty of Turkish airspace."

The Journal "Forbes" An article by Mark Adomanis, an American columnist who often writes about Russia, was published.

He recounts the Kremlin’s reaction to the incident: President Putin called Ankara’s actions a “stab in the back”, and Foreign Minister Sergey Lavrov canceled his scheduled visit and at the same time advised Russians to refrain from traveling to Turkey.

Turkey, in response, convened a meeting of the NATO Council and made statements on the protection of "territorial integrity".

Will there be a third world war? Professor New York University Mark Galeotti argues that the situation with the plane will not lead to the Third World. Firstly, it is extremely doubtful that the Russians want to start a war against Turkey. Secondly, even if they wanted, they do not have the resources for such a large-scale undertaking. And in general, the Russian army has “very limited capabilities” for the transfer of forces and means, and they are not capable of waging war with a “serious rival” like Turkey. The professor is waiting for only "angry statements", primarily from Putin, and nothing more.

Adomanis himself believes that the incident with the Su-24 can hardly be “carefully resolved”. The consequences will be. They will appear in the Middle East, since the Russians and the Turks are pursuing opposite goals there. The incident can give a start to a long "smoldering conflict." The Russians can assist the Kurdish detachments, and not very much, and the Turks will pay back with the same coin and “help” the militants of the North Caucasus.

British newspaper «The Guardian» believes that the "shooting" by Turkish forces of the Russian Su-24 will lead to an increase in tension between the two countries. In essence, this is the first present and direct clash between a member of NATO and the armed forces of the Russian Federation.

Since then, NATO and the US coalition operating in Iraq and Syria have been confronted with the possibility of a tough confrontation with Moscow.

Earlier, Turkey has repeatedly expressed concern about the "attacks on Turkmen" - Sunnis from the Muslim minority, which many Turks consider to be "near and dear to the people." Like the Turkish government, the Turkmen are against Syrian President Bashar al-Assad. The Turkish authorities claim that the Russian military forces are mainly beating on anti-assad rebel groups inside Syria, and not at all on the positions of "IG".

The British edition reminds that Ottoman Turkey and Tsarist Russia fought a war in 1877-78. Tov. Stalin for a short time claimed the part of eastern Turkey at the end of World War II. True, in recent times, relations between the two states have improved (after a series of “energy and trade deals”). Russia became the second trading partner of Turkey. Today 60% of natural gas comes from Russia.

American Online Journal "The Slate" believes that Turkey and Russia will henceforth be “problematic partners.” However, it is not about gas trading.

Journalist Joshua Keating, specializing in international topics, doubts that Russians and Turks are unlikely to join together in any “project” aimed at destroying “IG”. In addition, Russia is more interested in maintaining the "Syrian regime", while Turkey is more interested in the bombing of "Kurdish militants" who are just showing success in the fight against "IG".

In addition, after the tragic Tuesday, Russia is unlikely to be able to cooperate with NATO forces in Syria.

Finally, Putin can step up a campaign against Turkish rebel groups operating in Syria.

The journalist said last Tuesday “a good day for both the Assad regime and the IG.”

There is also a German opinion about a catastrophe in the sky.

In the newspaper "Frankfurter Rundschau" A replica of Vice Chancellor Sigmar Gabriel was published. He criticized the actions of Ankara.

According to Gabriel, the incident showed that the Russians are not unpredictable, but the Turks.

Speaking at a political conference in Berlin on Tuesday, the leader of the SPD noted that the Russians had “confronted airspace,” but the fact that Turkey “is an unpredictable player in this conflict” cannot be hidden.

The former US ambassador to the UN, John Bolton, summed up a peculiar result of Western statements.

He commented for Fox News incident with the Su-24. 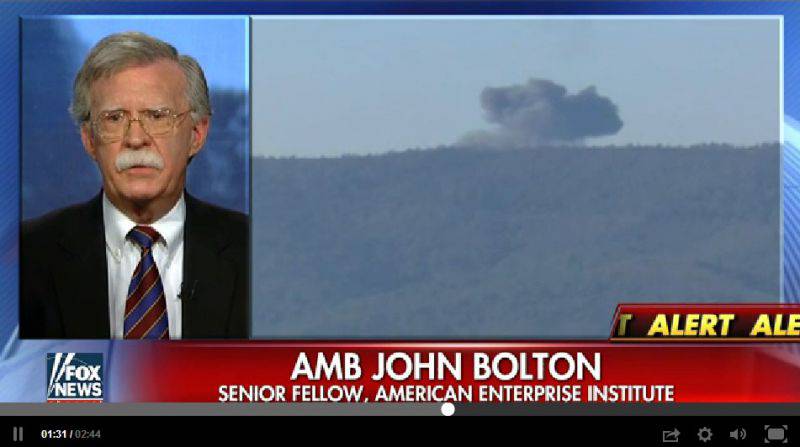 John Bolton blamed Moscow for the incident. Moreover, he suggested that Barack Obama advise Vladimir Putin on issues related to the incident to “back off”.

According to Mr. Bolton, the Russians had nothing to do in that area at all, and such an aerial incident was easily "predictable." And even it is strange that something like “did not happen before.”

Of course, Bolton does not blame Turkey. But blames Russia, which, according to the ex-ambassador, "invaded NATO airspace."

Thus, let us add on our own, the general attitude of the West is obvious: the “guilty” Russia, through the mouths of a political doll, was advised to “kick off”, because the NATO state cannot be wrong, but Moscow is proving to be out of place.

As for the execution of a pilot with a parachute, the Turkmen militants in this case were “defended” with “full” right. That is what flexible thinkers from the US State Department think. And if some journalists ask thinkers uncomfortable questions at the briefings - for example, about the strange “right to shoot at pilots descending on parachutes,” then the State Department representative can always say that he does not have “full and clear understanding”.

There is no understanding, but there are conclusions.

Ctrl Enter
Noticed a mistake Highlight text and press. Ctrl + Enter
We are
Middle Eastern Turkmen. Turkic factor in Iraq and SyriaResults of the week "I do not need a Turkish coast"
161 comment
Information
Dear reader, to leave comments on the publication, you must to register.