General Rudskoy: “Military contacts with Turkey will be stopped” 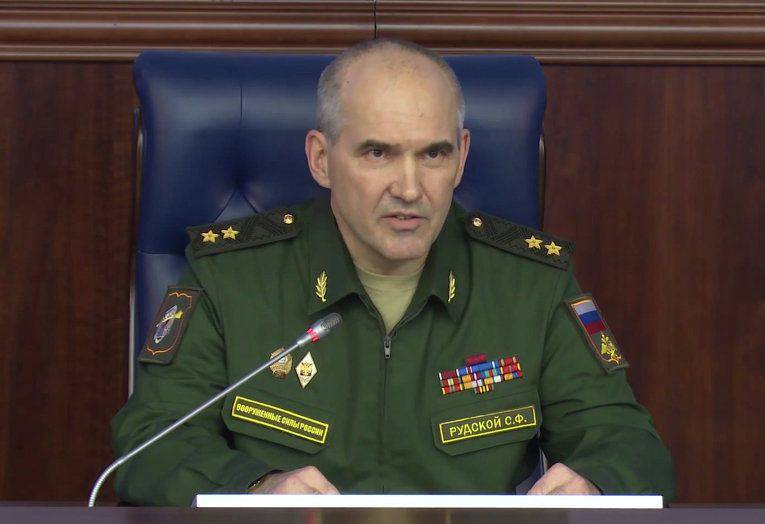 “Today (November 24) in 10.24 Moscow time. while performing a combat departure over the territory of the Syrian Arab Republic, the F-16 Turkish Air Force fighter was shot down by a Su-24M front bomber of the Russian HQs. Presumably the defeat was inflicted by a short-range rocket with a thermal homing head.

There were no attempts by the Turkish aircraft to contact or establish visual contact with our crew by means of objective monitoring.

A rocket hit a Su-24M aircraft over Syria. The crash site is located on Syrian territory four kilometers from the border. The crew of the aircraft ejected. According to preliminary data, one pilot was killed in the air by fire from the ground.

According to the exact data of objective control, our plane did not cross the border with Turkey.

This is also confirmed by the data of the Syrian air defense.

Moreover, according to the radar intelligence of Hmeimim airfield, the fact of violation of the airspace of Syria by the attacking aircraft of the Turkish Air Force was noted.

This fact is regarded as a gross violation of international law with the most serious consequences and a direct violation of the Memorandum on the prevention of incidents and ensuring flight safety in the Syrian Arab Republic, concluded with the United States and extending to all countries of the coalition, including Turkey.

Apparently, therefore, Turkey began emergency consultations with NATO, instead of urgently entering into contact with the Ministry of Defense of the Russian Federation.

The Turkish military attache in the Russian Federation declared a strong protest against the actions of the Turkish Air Force, which led to the loss of our aircraft.

It should be noted that from the very beginning of the operation we established a direct telephone line between the National Center for Defense Management of the Russian Federation and the Ministry of Defense of Turkey, but it did not bring any practical benefit from the fault of the Turkish side.

In order to evacuate Russian pilots from the landing site, a search and rescue operation was conducted involving two Mi-8 helicopters. During the operation, one of the helicopters as a result of small-arms fire weapons received damage and made a forced landing on neutral territory. One marine contract soldier died.

The actions of the search and rescue team and the helicopter crew were evacuated and are currently on aviation base "Hmeimim". The helicopter was destroyed from the territory controlled by gangs with mortar fire.

The search and rescue operation of the crew of the downed Russian bomber continues.

I want to emphasize that in the area of ​​operations of the Russian aviation, an operation of Syrian government troops is being conducted to destroy gangs in which, according to our data, more than 1000 militants from the North Caucasus are concentrated.

I draw your attention to the fact that none of our partners and the countries leading the fighting against ISIS have ever said that there are units of the so-called “moderate opposition” in this area and that they do not recommend striking the area. On the contrary, these areas are known as territories controlled by the most radical gangs.

The General Staff is currently working on additional measures to ensure the security of the Russian aviation base.

First: All actions of strike aviation will be carried out only under the cover of fighter aircraft.

Second: Measures will be taken to strengthen the air defense. To this end, the cruiser "Moscow", equipped with an air defense system "Fort", similar to the C-300, will occupy the area in the coastal part of Latakia. We warn that all the goals that pose a potential danger to us will be destroyed.

Third: Military contacts with Turkey will be terminated. ”

Ctrl Enter
Noticed oshЫbku Highlight text and press. Ctrl + Enter
We are
ARMY-2016. Cluster VCS. Part of 2. Space is space!The new concept of the Russian Aerospace Force of the Russian Federation will include a radical response to the Turkish aggression against the Su-24M
Military Reviewin Yandex News
Military Reviewin Google News
127 comments
Information
Dear reader, to leave comments on the publication, you must to register.