November 25 2015
38
26 May 2015 in Tbilisi hosted the already traditional exhibition of military equipment and armaments, which were created by specialists of the Scientific and Technical Center (STC) Delta, which is under the control of the Georgian Ministry of Defense. The main production base of STC "Delta" is Tbilisi aviation plant. Among other novelties at the exhibition, a promising 9-mm submachine gun, called “Iamani”, was also presented.


It is worth noting that at present the state scientific and technical center "Delta" is the main developer of light armored vehicles, small arms and artillery weapons and ammunition. In addition, aviation equipment for the armed forces and the Georgian police are produced here. The center was founded in 2010 year, including 6 major defense plants and research centers in the country, the center's staff exceeds two thousand employees. Today "Delta" is known mainly for its Didgori armored vehicles, which are widely presented in different versions. At the same time, at the same exhibition, which took place on 26 in May of the current year, the company also presented an unmanned reconnaissance-attack helicopter, so the list of products manufactured here is quite extensive. 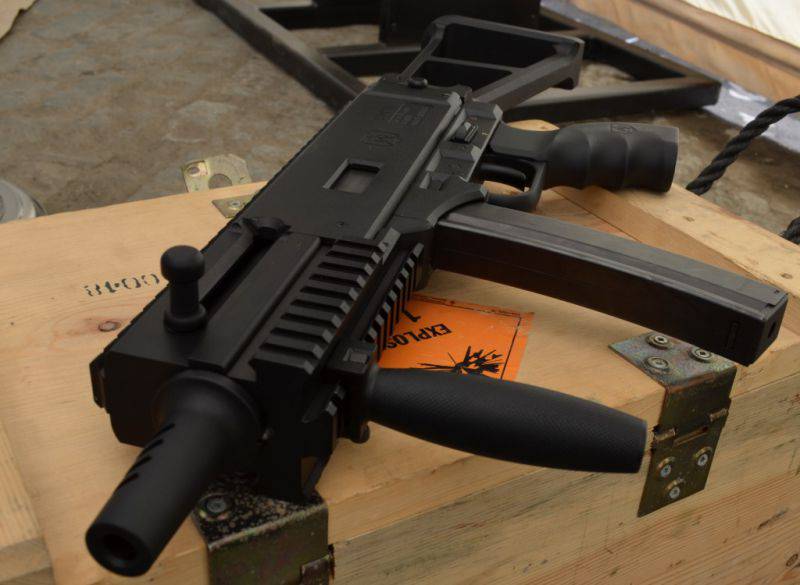 Returning to the 9-mm Iamani submachine gun, it can be noted that it is intended primarily for arming the police and intelligence services of the country, where it can completely replace foreign submachine guns and the Soviet AKS-74U. In this case, use a submachine gun Iamani in the military units, apparently, is not planned. Most likely, the submachine gun presented in Tbilisi is designed mainly for the domestic Georgian market.

The new submachine gun of Georgian manufacture was named Iamani (Iamani is a Georgian male name, in the local epic about the hero Amirani, this name was worn by the father of the hero). In general, this small weapon It is very unusual for a country that does not have big weapons traditions. Usually such countries are engaged in copying foreign samples or releasing them in their home countries under license, or trying to make various compilations based on them. In Georgia, they hope that the submachine gun they have created can help replace weapons purchased in Germany and the Czech Republic - MP5K, MP5SD, HK UMP 45 and CZ 61 Scorpion machine guns. According to the official website of the enterprise developer, the pistol-machine gun was created primarily for special purpose units and the police. 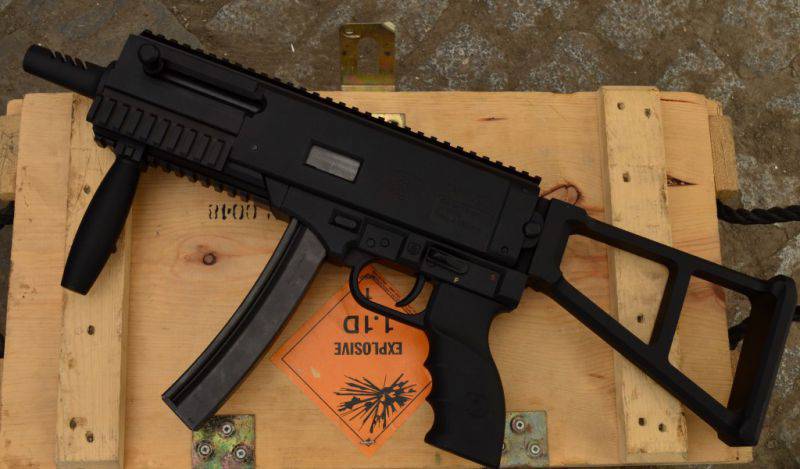 “Iamani” refers to the machine guns of the so-called “heavy” class, such as CZ Scorpion EVO 3, MP5 or Russian “Vityaz”, according to the thematic internet resource all4shooters.com. This submachine gun is made according to the classical scheme with a free gate. Despite this, various modern materials were widely used in the construction of the Georgian submachine gun. So his receiver was made of alloy steel, and the pistol grip and butt - from high-strength polymeric materials. Externally, this submachine gun stands out for its rather large receiver, which has an angular shape, which the Georgian gunsmith designers apparently wanted to maximally simplify, eliminating as many of the complex and protruding parts. For this reason, the Iamani receiver has a characteristic “brick-like” appearance.

The advantages of the submachine gun rightly include the fact that the control was made two-way: the reloading handle of the weapon, the reflector and the ejection of the sleeves can be rearranged on both sides of the weapon, which allows firing from both the right and left shoulder. For this reason, on the receiver, the cut-out for the passage of the reloading handle and ejection sleeve is made on both sides. The shop latch key also has a two-sided performance. This makes the submachine gun convenient for both right-handers and left-handers. The fuse is located at the top of the pistol grip. It has two fixing positions: S - protection and F - fire. 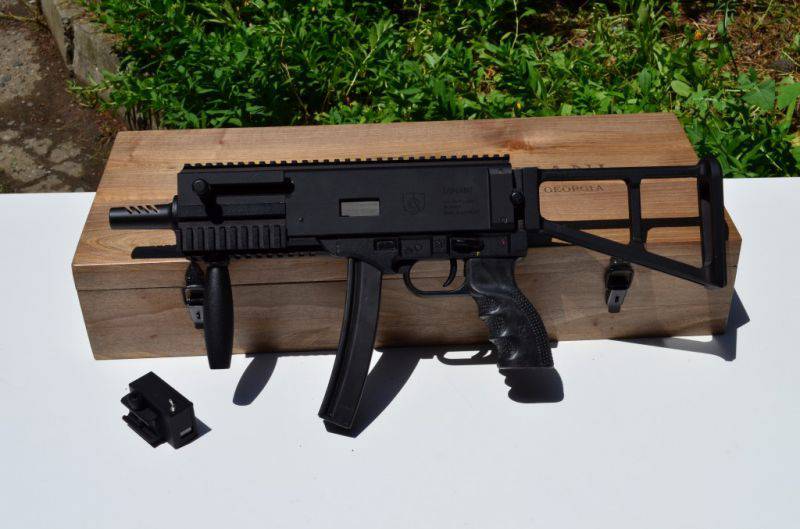 The entire length of the upper part of the receiver of the submachine gun is a standard Picatinny rail MIL-STD-1913, which is designed for installation: mechanical, optical and collimator sights. Another three much shorter Picatinny trims are in the front of the receiver. They are designed to install a laser pointer, tactical flashlight, additional front handle and other tactical accessories widely represented on the modern weapons market.

At the front of the barrel of the Georgian submachine gun mounted muzzle compensator slotted type. Installing such devices on small arms can reduce tossing the barrel when fired, as well as improve the accuracy of automatic fire and reduce the time of aiming when firing single ammunition. The Iamani submachine gun is equipped with a box magazine designed for 30 cartridges. This shop is identical to the one from the German MP5 submachine gun. The weapon is equipped with a plastic butt "skeleton" type, which is folded on the right side of the receiver. In the folded position, the butt does not close access to the trigger guard, so in an extreme situation the shooter can open fire with a submachine gun, even without folding the butt. 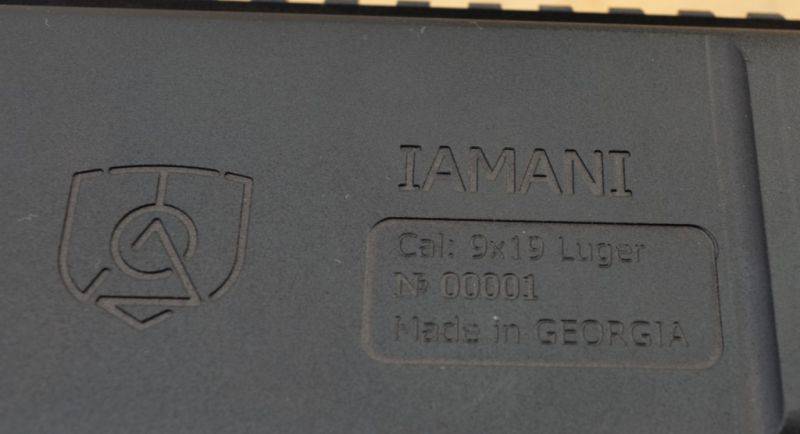 Detailed information about the novelty of the SEC "Delta" does not yet provide, mainly for acquaintance only the main tactical and technical characteristics of the weapon are presented. The lack of detailed information indirectly testifies to the fact that this is a prototype, which is still far from being introduced into production. This is confirmed by the fact that at the exhibition in Tbilisi was presented a submachine gun, which has a serial number - 00001. At present, the future of the Georgian Iamani submachine gun seems rather vague, especially considering that in recent years Georgia has been significantly reducing its defense spending. 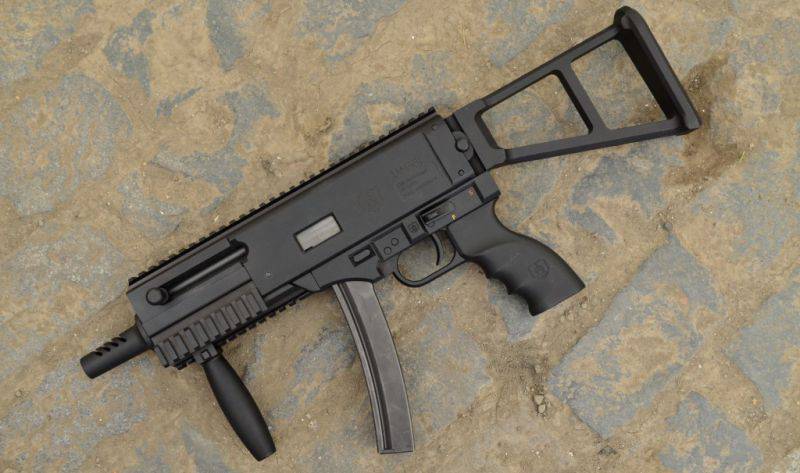