Strange aspects of the tragedy in the Syrian sky

November 25 2015
432
Not to study everything that concerned the fact of the attack and destruction of our aircraft in the airspace of Syria yesterday was simply unrealistic. Having looked and read all that is possible, I noticed a few really strange nuances. 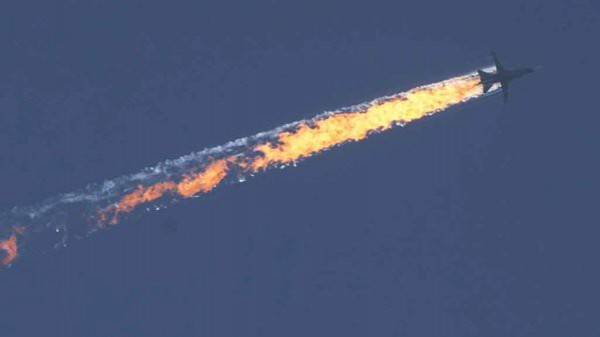 Some of the answers are not required, everything is clear. But the part remained under the question mark.

However, military actions are taking place on the territory of the SAR. Therefore, the following questions arise.

1. Why did our Su-24M act alone? Not in a pair, without a fighter cover? Perhaps he was in the "free hunting". But this does not remove a certain feeling of an unserious attitude to what is happening.

2. Why were the Mi-8 helicopters sent to the square after the crash? After all, it was known that the area is controlled by the Turkoman gangs. As a result - the death of our fighter and the loss of one helicopter. If, instead of Mi-8, bearded scum would see Mi-24, the situation would be completely different.

3. It seems that the presence in the area of ​​the fall of so many bandits came as a surprise. What is it, excessive trust in information from "partners" or a flaw in intelligence?

4. It was stated that the Su-24 was not equipped with a missile launch detection system. No comments at all. The pilots were virtually unarmed against any attack.

It seems that our command was not ready for both this situation and its consequences. I agree that no one expected this sort of vileness from the Turks. And the attack of the Turkish fighter was a nightmarish and tragic surprise.

However, there is always the likelihood of firing aircraft and helicopters from MANPADS and large-caliber machine guns. And no one canceled accidents. Rescue system in areas under the control of terrorists, should be.

And a few questions regarding the actions of the Turkish side.

It seems to me a strange meeting of one Su-24 and one F-16. A lone fighter was raised to intercept a lone bomber? I do not believe in chance at all.

Apparently, the Turkish side planned something similar in advance. I monitored all the ups of our planes on my radars, finding out whether the opportunity for such an action would be provided.

There is no doubt that if at least one Su-4 were in the air within 5-30 radius, then the Turks would not even twitch to intercept, all the more so if they left their airspace. Even together, since the “thirtieth” “sixteenth” is clearly too tough.

So planning is in place.

Moreover, there are generally accepted rules of action in such situations. In case of violation of the airspace, the following algorithm of actions was adopted.

1. Notify the violator on the radio frequency. It usually ends there. I doubt that was done. Especially, 10 warnings for 5 minutes.

2. Warning fire. Usually done with the help of a gun at an angle to the course of following the offender.

3. Forcing to land. It is accomplished with the help of maneuvers that our “air” readers will explain better than me.

4. And only when all the preceding paragraphs have failed, and provided that the actions of the offender are clearly a threat, the fire is fired.

We have what we have. The Turkish fighter jumped out of its airspace and launched a rocket on our plane.

These facts indicate only one thing: we are dealing with a pre-planned (and well) planned operation. All that the Turks can offer as an argument will look like an unsubstantiated babble. They wanted to shoot down our plane, they shot it down.

Yes, the organization of our VKS combat sorties helped them in this. And helped considerably. But this does not remove any responsibility from the perpetrators. Deserved punishment must be borne by everyone: the real killers (Erdogan and the oil merchant's son), and unwitting accomplices (responsible for developing action plans for our pilots).

A thousand tankers with oil from ISIS for Erdogan Jr. - too little payment for the death of our soldiers. Retribution must overtake everyone - both those who sanctioned the murder (otherwise I can’t characterize what happened) and the one who pressed the start button.

But it will be even more offensive if this tragic lesson is not learned.

The Defense Ministry announced that all targets representing a potential threat in the air will be destroyed.

I would like to hear another statement. That in those mountains, where the bullets were flying towards our pilots, there was nothing left alive. To burn everyone, as they proposed to do it with our killed pilot. And may their Allah understand, who is the Mujahid and who is not.

Ctrl Enter
Noticed oshЫbku Highlight text and press. Ctrl + Enter
We are
Front lines in the Syrian conflict as contours of the future world orderSituational analysis of the death of the MH17 flight (Malaysian Boeing 777), made on the basis of engineering analysis from 15.08.2014
Military Reviewin Yandex News
Military Reviewin Google News
432 comments
Information
Dear reader, to leave comments on the publication, you must to register.