"The unit of political longevity is one Mikoyan" 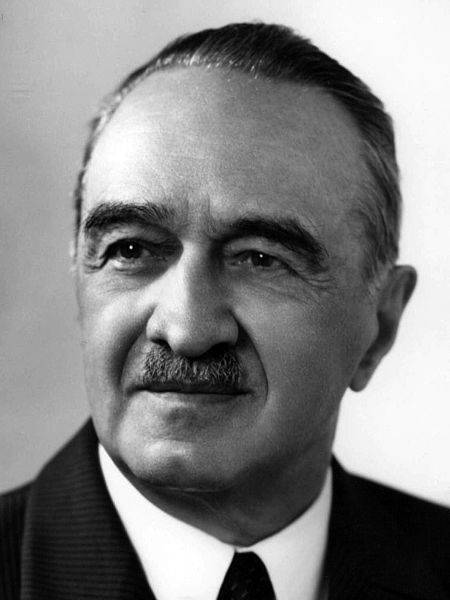 120 years ago, 25 November 1895, was born the Soviet statesman and political figure Anastas Ivanovich Mikoyan. Mikoyan had an amazing political longevity - having begun his public career with V. I. Lenin, Mikoyan completed it with the coming to power of L. I. Brezhnev. The main sphere of his activity was the foreign trade and food industry of the USSR, to the development of which Mikoyan made a great contribution.


In addition, during Khrushchev, Mikoyan was called abroad "the man №2 in the USSR", as he served as the first deputy chairman of the USSR Council of Ministers and was the most active member of the Presidium of the Central Committee (Politburo). It is at this time that most of his foreign missions fall. Mikoyan was even considered abroad as the unofficial minister of foreign affairs of the USSR. The fact is that N. S. Khrushchev, like Stalin, had a very high opinion of Mikoyan’s abilities, including diplomatic ones. Mikoyan’s mission in China began under Stalin. And Khrushchev preferred to send him in especially important cases, and not the Minister of Foreign Affairs. The geography of his travels is extensive: Austria, Afghanistan, Burma, Bulgaria, Hungary, Vietnam, Ghana, Guinea, GDR, Denmark, India, Indonesia, Iraq, China, Cuba, Mali, Morocco, Mexico, Mongolia, Norway, Pakistan, Poland, Romania , USA, Finland, France, Germany, Yugoslavia and Japan. In some countries, Mikoyan visited more than once. For example, Mikoyan in 1962 was actively involved in resolving the “Caribbean Crisis”, leading in person talks with leaders of the United States and Cuba Kennedy and Castro.

Anastas Ivanovich Mikoyan was born 13 (25) in November 1895, in the village of Sanahin, Tiflis Province, in an Armenian family. After graduating from the village school, he entered the seminary in Tiflis. He fought on the Caucasian front against the Turks. Returning to Tiflis, he joined the RSDLP (b) there. In 1916, he entered the Theological Academy in Echmiadzin. From 1917, he led the party work, from March 1919, he headed the Baku Bureau of the Caucasian Territorial Committee of the RCP (b). Anastas Mikoyan was the editor of the Social Democrat and the News of Baku Council newspapers. In October, 1919 was called to Moscow; member of the Central Executive Committee.

From 1920, Mikoyan was again in the Caucasus. With the occupation of Baku by the Bolsheviks, he entered the city as an authorized Revolutionary Military Council of the 11th Army and then headed the Nizhny Novgorod provincial committee until 1920. As a representative of the group t. "Caucasians" (former members of the Transcaucasian organization) Mikoyan supported Stalin in the inner-party struggle. On the recommendation of Stalin, Mikoyan was appointed secretary of the South-Eastern Bureau of the Central Committee of the RCP (B.), And then chairman of the North Caucasian Regional Party Committee. In the Caucasus, Mikoyan led a rather moderate policy towards the Cossacks and the peasantry, offering to deal with the grain procurement crisis not with emergency measures, but with increasing industrial supplies to the village. 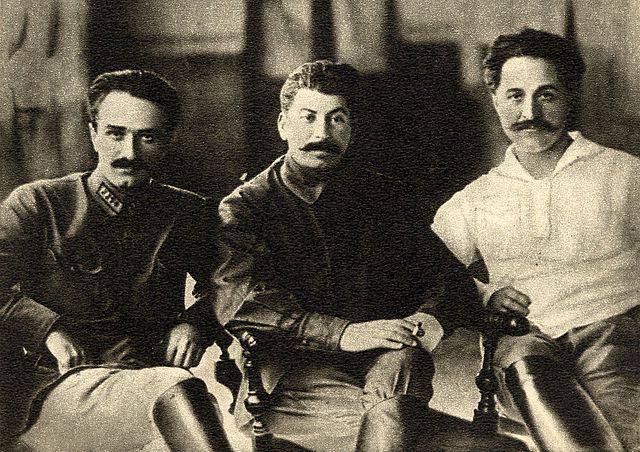 On the recommendation of Stalin, Mikoyan was a candidate member of the Politburo since 1926, as well as the people's commissar of commerce. Becoming the youngest Commissar. From 1930, he was Commissar of Supply; from 1934, the People's Commissar of the Food Industry. With 1935, he became a member of the Politburo. In 1938 — 1949 — Commissar of Foreign Trade. Mikoyan made a great contribution to the development of the Soviet food industry. Famous fish days were introduced in the USSR precisely at his insistence: in September 1932, the decision of the USSR People's Commissar of the USSR “On the introduction of the fish day at catering establishments” was issued. Much later, in 1976, the fish day was set for Thursday.

There is an opinion that Mikoyan should also be considered one of the founders of Soviet advertising. The People's Commissar invited famous poets to come up with catchy advertisements, like Mayakovsky: “Nowhere except in Mosselprom”. And on the roof of the Polytechnic Museum there was a motley advertisement: “It’s time for everyone to try, how crabs are tasty and tender,” “I eat jam and jam,” “Do you need a gift in your house? Buy Don Hall. All this was the idea of ​​Mikoyan, who also oversaw domestic trade.

If you try to identify the causes of "flooding" and the unprecedented political longevity of Mikoyan, you can bring his own words to a foreigner: "In short, I was just lucky." Indeed, Mikoyan many times was on the verge of ruin or career wreck. He really was lucky all his life. He could have been killed on the Turkish front in 1915. - Anastas Mikoyan enlisted in the Armenian volunteer squad of Andranik Ozanyan, after which he fought with the Ottomans. He could have been killed in Baku in 1918, when during the shootout two of the four soldiers of his squad who fought alongside him were killed, and he himself was wounded. Death bypassed him several times during the defense of Baku from the Turkish troops in the fall of 1918. He could have been killed by the Social Revolutionaries in Krasnovodsk or Ashkhabad after the fall of the Baku commune at the end of 1918. He could be handed over to Denikin counterintelligence as a result of two arrests in Baku and one in Tiflis in 1919. .

It should be noted that Mikoyan did not rush into the leaders. Often, on the contrary, stubbornly refused to raise, and agreed, only submitting to party discipline. As a result, they did not see the enemy in him. And he was a good performer. Mikoyan was devoted to work, had a unique memory, was an excellent organizer, always finding a way out of a difficult situation, was a leader who coped with all the tasks that he received. He was tactful, flexible, and avoided confrontation. In the 20s, he sincerely treated Stalin well, respected and appreciated him, and he, as an excellent psychologist, saw it. To other leaders showed loyalty, not intriguing, trying to substitute. Thus, in Mikoyan, they did not see a competitor and an enemy, they considered it a good helper.

Therefore, Mikoyan survived the struggle for power and the repression of the 1920-1930-s. In 1920, Mikoyan occupied a moderate line, and the time of the “great breakthrough” was supported by Stalin. He also behaved during the repression of the 1937 of the year, that is, he did not take the initiative, but did not resist them either. At the same time, Mikoyan authorized the arrest of many employees of the People's Commissariat of Food Industry and the People's Commissariat of Foreign Trade of the USSR

In 1942, a Red Army deserter who took over Anastas Mikoyan’s car for Joseph Stalin’s car tried to shoot him, but failed. During the war, Mikoyan was the chairman of the food and clothing committee of the Red Army, as well as a member of the Council for Evacuation and the State Committee for the Restoration of the Economy of the Liberated Regions, since 1942, he was a member of the State Committee of Defense. Throughout the war years, Mikoyan was intensely engaged in the development of catering. A large number of canteens were opened at industrial enterprises and institutions. For many workers and employees, public catering became the main form of food during the war years and saved many people from starvation. In 1943, Mr. Mikoyan was awarded the title Hero of Socialist Labor. In 1953, Mr. Mikoyan could have fallen under the new wave of cleansing that Stalin planned to launch. However, the death of the leader kept Mikoyan on the Soviet Olympus.

In sensitive matters, Mikoyan usually took an evasive position. At the same time, he generally supported Khrushchev against Beria and regarding the exposure of the "personality cult" of Joseph Stalin. Thus, during the congress, he actually made an anti-Stalinist speech (although not naming Stalin by name), declaring the existence of a “personality cult”, stressing the need for peaceful coexistence with the West and the peaceful path to socialism, criticizing Stalin’s works: “Short Course stories VKP (b) ”and“ Economic problems of socialism in the USSR ”. Following this, Mikoyan headed the commission for the rehabilitation of prisoners. At the plenum of the Central Committee 1957, he strongly supported Khrushchev against the anti-Party group, which he secured for himself a new rise in his party career.

Supporting Khrushchev, Anastas Mikoyan reached the peak of his career. In 1955 - 1964 served as first deputy chairman of the Council of Ministers of the USSR. From 15 July 1964 to 9 December 1965 - Chairman of the Presidium of the Supreme Soviet of the USSR, which was the highest state post in the USSR. The fall of Khrushchev was the end of Mikoyan’s career. During the October (1964) plenum of the CPSU Central Committee, he tried to carefully defend Khrushchev, emphasizing his foreign policy achievements. As a result, in December 1965, Mikoyan was dismissed as having reached the 70 age and was replaced by the loyal Brezhnev Nikolai Podgorny. At the same time, Anastas Mikoyan remained a member of the Central Committee of the CPSU and a member of the Presidium of the USSR Supreme Soviet (1965 — 1974), and received the sixth Order of Lenin.

He died on October 21 1978, at the age of about 83-s. Anastas Mikoyan caught a cold, then the pneumonia began, which passed into the pulmonary edema, and the body could not stand it.

Ctrl Enter
Noticed oshЫbku Highlight text and press. Ctrl + Enter
We are
Pragmatist MikoyanMyths of the Great Patriotic. Did Stalin have prostration in the first days of the war?
Military Reviewin Yandex News
Military Reviewin Google News
20 comments
Information
Dear reader, to leave comments on the publication, you must to register.