Erdogan stabbed us in the back. What will answer?

November 25 2015
199
What happened should have happened. It's a question of time. The time has come. In Syria, there is a war, and inevitably everyone was prepared for the inevitable losses. But of course, so that in the back, do not expect. 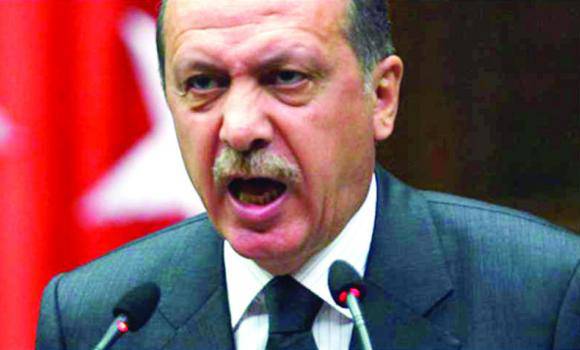 Erdogan revealed his true face to the Russians. There is no doubt that the attack by the Turkish fighter of our Su-24 is not a private initiative of the Turkish Air Force pilot. There is only one person who is responsible for the tragedy. That is the president and commander-in-chief of Turkey Erdogan.

It is quite clear that at the moment Erdogan is in a fit of hysterics. Russia stepped on his sore spot: pocket. It is no secret that the main part of the bulk oil tankers destroyed by the Russian HVAC, went to the companies controlled by the Erdogan family.

30000 oil barrels in Syria and 20000 barrels in Iraq are mined in ISIL-controlled territories. And 90% of this oil went to Turkey. And oil was sold at a price of 10-35 dollars per barrel.

It is significant that no explanations were given from Turkey regarding the incident for many hours after the tragedy. Only an appeal to NATO colleagues. Say, protect from Russian.

So, what is the fault of Russia?

Russia has moved to the destruction of infrastructure facilities and oil factories of the LIH.

Russia practically blocked the main road to Turkey, which was used for the supply and pumping of oil and antiques from the plundered ISIS in the occupied cities.

What steps has Turkey taken?

On November 20, Turkey accused Russia of attacking the Turkmen village of Bayyrbudzhak, and the Turkmen (Turkomans) allegedly "joined in" the fight against IS. In fact, being under the complete control of Ankara, parts of the Turkomans covered the departing towards the Turkish border. Moreover, the Turkomans declared the ISIS war after the air strikes received from the Russian HVAC.

Not far from our air base, a large aviation compound (Incirlik). Which consists mostly of fighters. The data are approximate. 12 American F-15C (clean fighters and well-armed), 14 F-16 Turkish Air Force. Well, a trifle like attack aircraft and tankers.

An open act of aggression against Russia. The destruction of the Russian aircraft being in the airspace of Syria.

What could be our answer?

Recognize that, despite the statements made, Turkey is not a member of the anti-terrorist coalition led by the United States and NATO, but an accomplice of ISIS. Based on this, plan the next steps.

Enhanced protection of our aircraft by the Su-35 at full combat load to work in the air and suppress, more precisely, the destruction of any aircraft that fly into the zone of the Russian aviation. The answer is based on Article 51 of the UN Charter.

Start targeted support for the Kurds in the military sphere. The Kurds are a knife at Erdogan's throat and real opponents of ISIS. The enemy of our enemy is our ally.

Suspend until better times all significant economic projects, from the construction of nuclear power plants to the "Turkish Stream". We cannot risk the lives of our fellow citizens who will have to work in a country that is one of the centers of aiding and abetting terrorism. We don't need the second Mali.

Stop all tourist trips of Russians to Turkey. In the name of security.

What happened with our aircraft is a hostile step towards Russia. And it is necessary to react to it quickly and rigidly.

Erdogan obviously played in the great Ottoman Sultan. It is the support of ISIS and the petrodollars received for the oil extracted by terrorists that allowed Erdogan, who has been in power for about 15 years, to revive the economy and create an army. The strongest in the region.

Erdogan pursued a policy to destroy all potential competitors in the region. Libya, Syria, Iraq. And, it should be noted that Turkey began to occupy an increasingly important position in the Middle East.

But Russia came and confused all the cards. And the oil flow began to dry up.

The fact that Erdogan committed both meanness and stupidity is understandable. The destruction of the Russian aircraft will entail a reaction from Russia. And everyone who is interested in the fight against LIH.

Turkey’s actions have clearly shown that Turkey is at war with ISIS only in words. In fact - this is the same assistant LIH, like Qatar. How it will react in Europe is not yet clear. But this behavior of Turkey is unlikely to meet with clear support.

Moreover, Europe may even go to the deterioration of relations with the United States on the issue of LIH. It will be very difficult for France to explain to its citizens the way out of the coalition and joint actions with Russia, the Germans too.

Truly, the world is beginning to share according to another principle. On the one hand, those who make huge money with the help of terrorists (the United States and Turkey), and on the other, those who fear real hostilities on their territory (Russia and Europe).

The Turks made a move by showing their true face. Now it's Russia.

P.S. A number of Russian tour operators in Russia have announced the termination of sales of tours to Turkey.

Ctrl Enter
Noticed oshЫbku Highlight text and press. Ctrl + Enter
We are
ARMY-2016. Cluster VCS. Part of 2. Space is space!The attack on the Russian aircraft and the political situation in Turkey
Military Reviewin Yandex News
Military Reviewin Google News
199 comments
Information
Dear reader, to leave comments on the publication, you must sign in.