November 26 2015
16
Not so long ago, the Finnish defense industry showed its new development. One of the relatively young companies completed the development of a promising armored car, built a prototype, and began to test it. It is reported that the new armored vehicle belongs to the class of equipment MRAP and is intended to protect the crew and assault troops from small weapons and enemy explosive devices. In addition, it is known about the use of several unusual solutions for such a technique.


The new armored car project was developed by Protolab Oy (Espoo), founded in 2007 year. According to reports, the development of the project was launched in 2009 year, and by now the work has reached the stage of testing a prototype. The project of Protolab Oy was named PMPV 6x6 (Protected Multi-Purpose Vehicle - “Protected Multi-Purpose Transport”). Also mentioned is the alternative designation MiSu - short for Miinasuojattu Maastokuorma-auto (“Cross-country vehicle with mine protection”).

Protolab Oy was the lead developer of the PMPV 6x6 project. In addition, there is information about the participation in the project of some other organizations that were responsible for the development of various components and assemblies. The project was developed according to the requirements put forward by the military departments of Finland, Sweden and some other countries. It is known that the project was financed by an unnamed third party. The works were paid for by a certain foreign company from Scandinavia, which exports arms. The name of this organization has not yet been disclosed, but you can make certain assumptions. 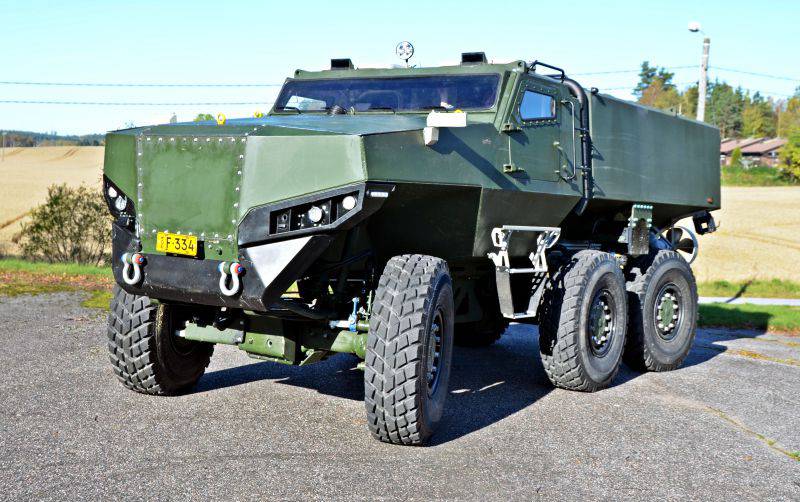 The design work was completed this year, after which the assembly of an experienced armored car began. The construction of the first copy of Protolab PMPV 6x6 was completed in early autumn, after which the machine was put to the test. Over the next few weeks, before the beginning of November, an experienced armored car passed through the ranges of about 800 km. In addition, the first floating tests have already been carried out. Two additional prototypes were built in incomplete configuration. In the near future, this technique will be tested by explosions at one of the UK landfills.

To date, the company has published a few photos and some information about its new project. Published data do not reveal some details of the project, but still allow you to make a fairly detailed picture.

The MRAP Protolab PMPV 6x6 class armored vehicle is a protected multi-purpose vehicle with a wheeled chassis. The task of this technology is the transportation of fighters with weapons or cargo of appropriate dimensions. It is alleged that with its own weight at the level of 14 t (empty or equipped - not specified), the armored car can carry up to 10 t of cargo. 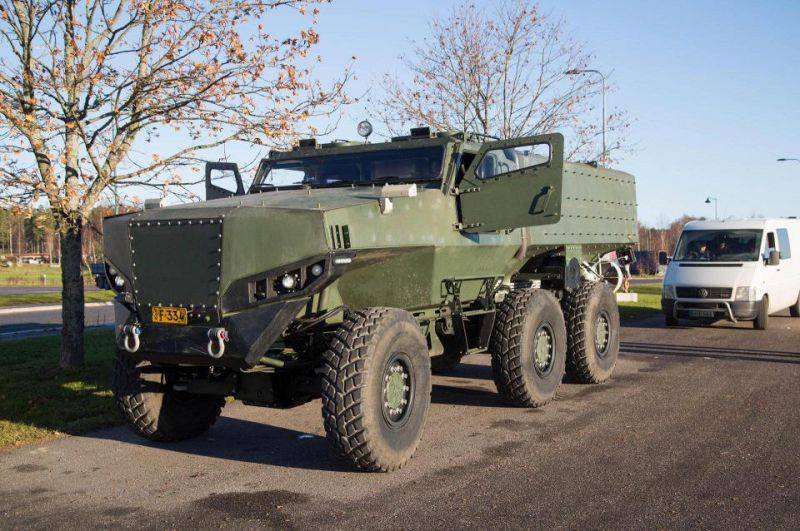 A new armored car built on the hood layout with a single-volume habitable compartment. A characteristic feature of the PMPV 6x6 is the large and forward engine compartment, the dimensions of which are directly related to the size of the engine used. At the moment, the new Finnish armored car is equipped with a Cummins diesel engine of 285 hp. and the Allison six-speed automatic transmission. As part of the power plant uses a specific cooling system of the original design, as evidenced by the absence of any grille on the surface of the engine compartment.

The chassis of the armored car is based on the units of commercially-made commercial trucks brand Sisu. The machine is equipped with an 6x6 wheel drive chassis fitted with an individual suspension. Undercarriage assemblies are mounted on the frame. Optimal weight distribution of the car on the ground is achieved by placing the axles with an increased gap between the first two pairs of wheels. To improve maneuverability, the front and rear axles are driven. Supplement for the wheel suspension are two water jet propulsion, located in the aft hull.

The body of the MiSu car, allegedly, is assembled from a new brand of armor steel developed by Ruukki. The case is made in the form of a single unit, divided into several compartments and providing all-round protection against small arms or explosive devices. Thus, the protection of the engine is carried out with the help of an appropriately shaped armor cover. In particular, from the impact of a shock wave in an explosion under the wheel or under the bottom of the engine is protected by inclined panels of wheel arches. 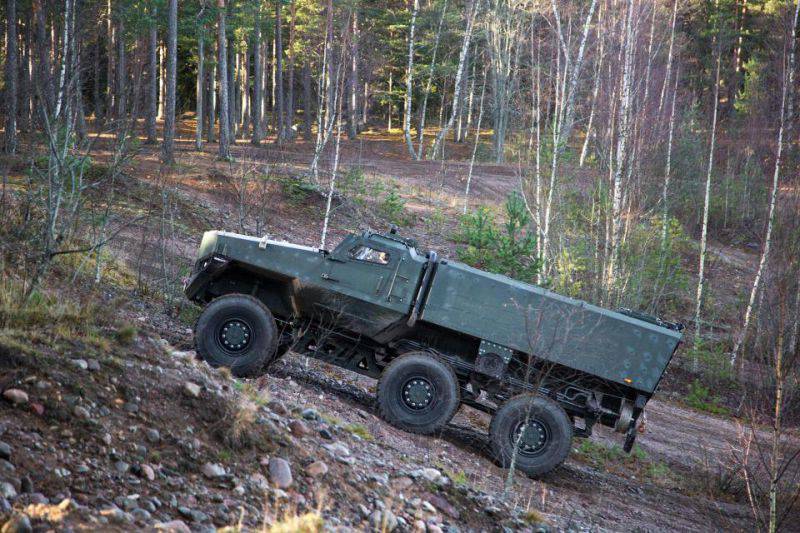 Behind the engine compartment is a double cab. It is equipped with a large armored windshield and two side windows of complex shape. The design of the cabin is designed to increase the level of protection. To this end, it has armor sides, assembled from two panels, a vertical upper and an inclined bottom. The bottom details of the sides and bottom form a V-shaped side booking. To preserve the strength of the hull, the side door openings are made only in the upper side plates. On the existing photos it is clear that there are hatches in the roof of the cabin. Due to the high height of the car, two ladders are located under the cabin doors.

In addition to the standard set of controls, the cabin is equipped with a number of special equipment. So, to simplify driving and improve visibility around the perimeter of the body, six video cameras are installed, the signal of which is displayed on a monitor in the cab. For work at night, a thermal imager is included in the equipment of the armored car.

The entire aft hull is made available for the accommodation of the troop compartment. This part of the body has a V-shaped "anti-mine" bottom and vertical sides. The bottom of the hull during the blasting of an explosive device must be deformed, absorbing part of the energy of the explosion and thereby reducing its impact on the crew and landing forces. Landing and disembarking are invited to perform through the aft door. In the roof there are several hatches. A curious feature of the PMPV 6x6 machine's troop compartment is the lack of glazing and equipment for firing personal weapons. Thus, the paratroopers during movement are located inside a closed protected volume, thereby achieving the highest possible level of protection. 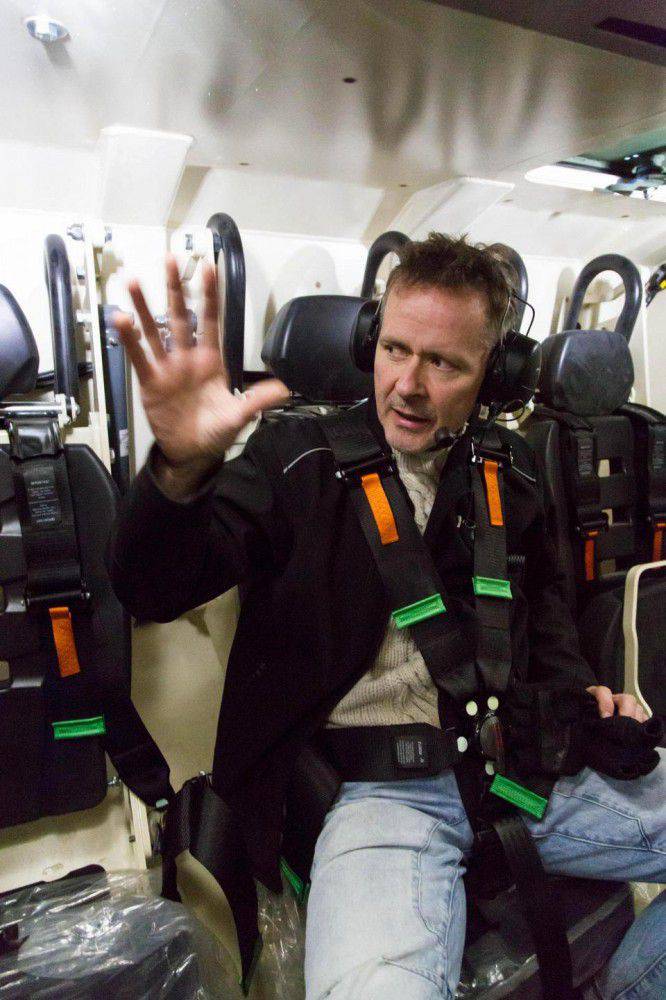 Along the sides of the troop compartment there are ten special-purpose seats that absorb part of the energy of an explosive device undermining. Chairs are completed so-called. five-point belts, as well as equipped with arcs of head protection and other equipment designed to protect the soldiers during the ride and during emergency situations. Also places for fighters have attachments for transporting weapons and connectors for recharging electronic equipment.

It is argued that solutions aimed at increasing the level of crew and airborne protection are used not only in the construction of individual units. Applied some ideas related to the overall layout of the machine. Thus, the body of the armored car Protolab PMPV 6x6 not only has a reinforced "anti-mine" bottom, but also hangs on special mounts. This, to a certain extent, improves the conditions for the crew, and also reduces the transfer of explosion energy to the hull.

In the current configuration promising Finnish armored car is not equipped with any weapons. However, as follows from the published data, the ability to install weapons is present. Probably, MiSu armored car can carry various types of combat modules with machine guns. It can be assumed that in this case, preference will be given to systems with remote control. 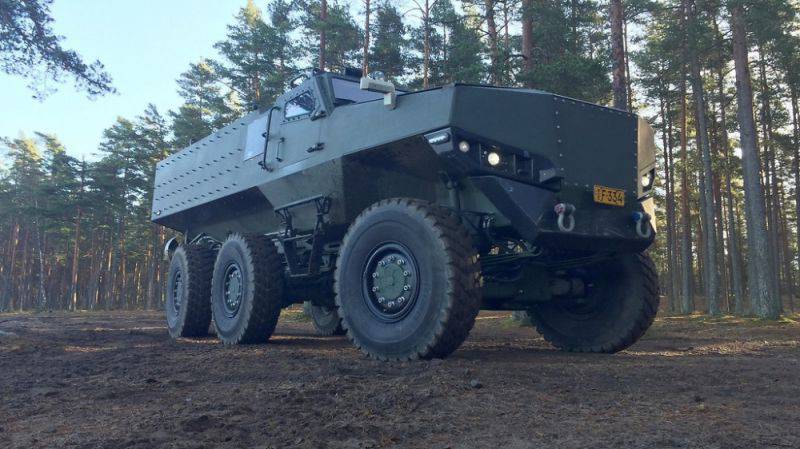 The new armored car has already passed part of the tests, which made it possible to determine its characteristics. The maximum speed of the car on the highway is declared at the level of 110 km / h. When traveling by water with water cannons, an armored car can accelerate to 10-12 km / h. Other characteristics of mobility have not yet been published.

To date, the company-developer has published only the most basic information about its new project and some figures. Therefore, in particular, the level of protection of the machine and some other parameters that directly affect its combat effectiveness remain unknown. Probably the full specifications of the PMPV 6x6 armored car will be published later.

At the moment there is one prototype of the MiSu armored vehicle, which is used in various tests at the test site. Two more prototypes in incomplete configuration in the near future will be sent to the UK, where they will check the level of protection of their armored corps. In the spring of next year it is planned to build another experienced armored car, which will differ from the existing ones with a full set of special equipment and will actually become a pre-production model.

Protolab Oy is already making plans for the future. In the case of orders for such equipment, mass production can start in about a year, by the end of 2016. Available production capacity will allow it to produce from 50 to 100 serial machines per year. The PMPV 6x6 serial armored car without special equipment and weapons, according to current estimates, will cost no more than 500 thousand euros. Installation of additional weapons and equipment, in turn, will lead to some appreciation of this technology. 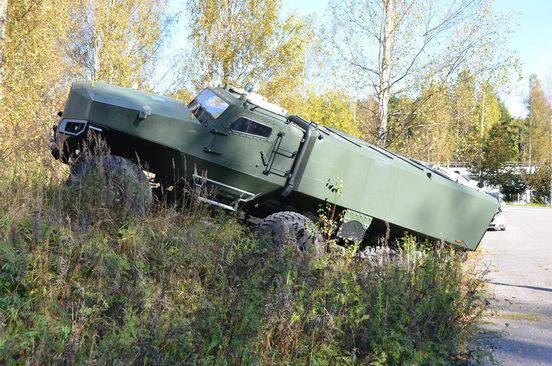 The new armored car project is primarily intended for export deliveries. Nevertheless, unconfirmed data has already appeared, according to which the Finnish Defense Ministry is also interested in a promising armored car. Thus, in the foreseeable future, several contracts may appear for the supply of MiSu vehicles for the army of Finland and the armed forces of other countries. In the case of the latter, deliveries are likely to be carried out with the assistance of a still unnamed Scandinavian defense company.

It is already noted that the purchase of armored vehicles PMPV 6x6 Finland is one of the most likely scenarios. The army of this state has a fairly large number of obsolete armored personnel carriers that need to be replaced. In this case, however, the purchase of a sufficient number of cars Patria AMV is not possible for economic reasons. The MiSu armored vehicle in this case is a reasonable and optimal way to upgrade the fleet of armored vehicles without unacceptable costs.

Currently, the Protolab PMPV 6x6 project is at the testing stage of the first prototype. Tests using this and other machines will continue for the next few months, after which mass production can begin. It is argued that upon receipt of the order, the serial construction of armored vehicles may begin at the end of next year. Thus, one of the most interesting and ambitious Finnish recent projects is approaching the final and may soon contribute to updating the fleet of vehicles of some states. However, to start production, the specialists of Protolab Oy have to complete the fine-tuning of their new car and gain the trust of potential customers.