The French are not the Americans: the war 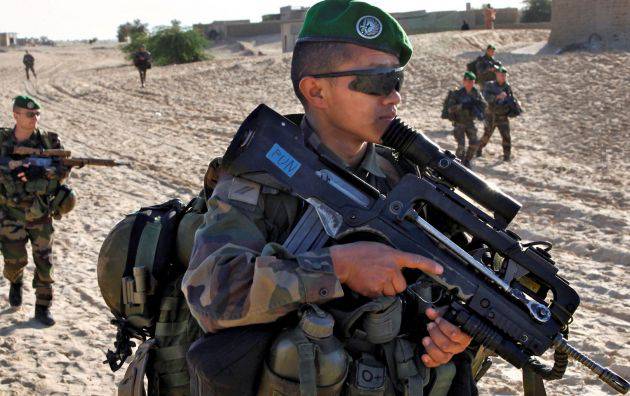 Actual carrier connection fleet France’s Russian-Syrian military operation against the caliphate gives many military analysts reason to consider the participation of the Fifth Republic in the ground operation against ISIS not only as possible, but also as probable.

Indeed, in the skies of Syria, the French are unlikely to be able to show such that would eclipse the attacks of the Russian Tu-160 or Caliber missiles - despite the fact that in fact the only practical purpose of connecting the French armed forces is to give the voter the necessary calming television the picture, providing it with verifiable reports about the successes on the front of the fight against terrorists.

A ground operation remains - everyone is fighting with everyone in the region, and there will be a place for another player in a ground operation. It is especially important that there are no Americans here - and the French will not have to fall under their formal or informal command, as in Afghanistan itself. This means that the task of showing the Frenchman in the street independence and military power can be solved to the full, without regard to the position of the Pentagon.

These arguments have caused quite a few publications in specialized military analytical publications of the United States regarding the fact that, as the Americans unexpectedly discovered, the French are fighting different ways in hybrid wars - and, in general, achieve success.

The French military has a bad reputation in the American general political press, associated with the traditional superficiality of such a press. This reputation is built from historical events such as the swift defeat by Nazi Germany in World War II and the colonial defeat at Dien Bien Phu.

However, military analysts have the opposite opinion of the modern French army: the French, from their point of view, "are among the best."

There is a French way of waging a hybrid war, which combines the lack of desire in France to spend large military resources and a clear calculation of the balance of objectives and sufficient tools to achieve it. They specialize in carefully planned and, as a rule, small but tough operations, often unofficial. Yes, the military of the Fifth Republic can go on a large-scale operation, but only if they receive resources from the US and other allies. So it was in Afghanistan, for example, where the French simply refused to participate in the planning of operations and actually transferred the command (and responsibility) to the US. But they build their own operations quite differently than the American army and navy.

Then the French were limited to using a single (sic!) Strike Fighter, and the two groups of paratroopers total of no more than a few dozen, who landed in the combat zone in the town of Birao. From a military point of view, what the French did pinprick, but the planning and organization were perfect, and it was enough to destroy the rebel offensive.

The level of preparation of the operation, experts note, shows the use of paratroopers, and not airmobile forces. Airborne attacks are more dangerous for the enemy, but more risky for the attackers - there is no opportunity to strengthen or evacuate lightly armed fighters in an emergency.

The French military, moreover, did all this quietly and unnoticed. The first reports in the French press appeared only a few weeks later and were strictly metered.

French intervention in Mali in January 2013 years also clearly showed all the signs of a very different than the US, the way of doing a hybrid war.

The French then demonstrated a high class of combined-arms operation and "joint" fire and maneuvering capabilities with poorly trained and almost without communications and control of local forces.

They competently used everything at hand - their special forces and the usual forces of the local army, outdated Tanks and untrained militia infantry, own high-precision artillery, attack helicopters and assault Aviation - while being able to organize a single command and tactical maneuvering. And all this in the most severe climate of tropical and desert Africa, when tank columns had to be stopped simply because the mechanics fell from heat stroke in obsolete cars. The French even had to rush to order new soldier's boots - ordinary tropical melted from the heat.

All this does not mean a banal deficit. The French military are very consciously planning operations based on their compact size and reasonable sufficiency in resources. In addition - and almost all observers note this - the French military, unlike the Americans, perceive the expansion of the mission very negatively and do not want to participate in such things as “national construction”, leaving the won battlefield to politicians.

In Mali, for example, the French military positioned themselves as a system for the destruction of several terrorist groups. But that's all they did. They refused to participate in anything else, such as restoring public order in Mali or participating in a conflict between various armed insurgent groups in Mali and the authorities of the state. Of course, this caused reproaches that the French military did not do much, what Mali needed, but the French strictly adhered to their policies and did not lose in the end - the most colorful and unpredictable government that received power eventually became their ally a priori.

The French, remarked by American military analysts, and learned to use America simply as a “local resource.”

Based on their experience with the US operations in Afghanistan, Libya, Mali, Somalia, the French have developed a strategy of how to work with the Americans.
They clearly know what they can most easily get from the United States, and what to do with it, namely: refueling, reconnaissance, surveillance and satellite tracking (ISR), large cargo planes, such as the C-17. The Americans give it simply and willingly - it is not connected with sending troops, it is not connected with personal risk for the US military that allows you to organize such support much easier, on a "technical" level.
The French will never ask for American Marines, or air support, or drone strikes - simply because they understand that the harm and difficulties that arise from such "help" will be much greater.

It is difficult to say whether the French behave differently in relation to cooperation with the Russian. However it is possible to observe that judge the effectiveness of the Army of the Fifth Republic need not by its participation in the American operation in Afghanistan, and for its own operations in recent years in Africa.
And the success of these operations, command respect.

Ctrl Enter
Noticed oshЫbku Highlight text and press. Ctrl + Enter
We are
A great interview with Sergey Lavrov: about Ukraine, Obama and IranWhat you didn't want to know about England
Military Reviewin Yandex News
Military Reviewin Google News
59 comments
Information
Dear reader, to leave comments on the publication, you must to register.