Battle of the Young: a repetition of the Kulikov victory 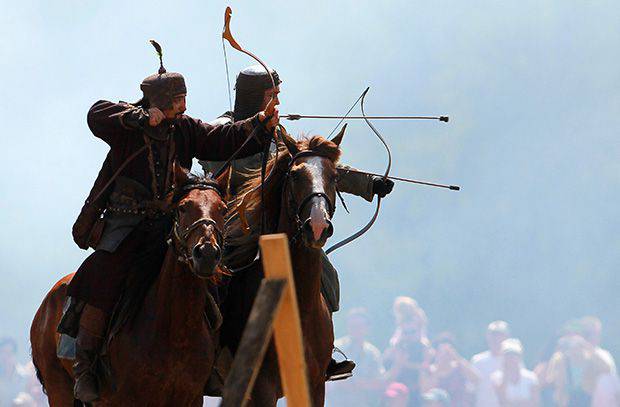 As governor of Ivan the Terrible, they managed to stop and destroy the Krymchak horde, six times superior in strength to the Russian army
В stories Fatherland, the first Russian autocrat, Ivan IV the Terrible, remained above all as the conqueror of Kazan and Astrakhan, the oprichnina ideologue, limiter of the boyar freemen, and cruel ruler. In reality, the years of the first Russian tsar's rule were not only gloomy, but also constructive: it was with him that Russia doubled and doubled! - expanded its territory, grew by many important lands and forced Europe to reckon with Russian interests and Russian politics.

A huge role in this was played by the battle, about which, alas, they began to speak seriously only at the very end of the twentieth century. But it was in the history of Russia since the times of Ivan the Terrible, the same as the Battle of Kulikovo two centuries earlier. At stake, then, the question was whether Russia would remain as an independent state, or, after getting back to victory, would return to a yoke like the Horde one.

The Russian warriors gave their answer to this challenge of time at the turn of the summer of 1572. Five days - from July 29 to August 2 - about fifty versts from Moscow, the capital of the Russian kingdom, they crushed the troops of the Crimean khan Devlet Giray I, supported by the Ottoman Turks, much larger than them and crushed. This battle entered the history of Russia under the name of the battle of Molodi: this was the name of the village in the vicinity of which the main events of those days took place.

The Russian ruler became aware of the upcoming campaign of the Crimean Khan Devlet Giray against Moscow, apparently at the beginning of 1572.

Since the end of the 15th century, the warriors of the Crimean Khanate, who broke away from the disintegrating Golden Horde in 1427, constantly engaged in predatory campaigns against Russia. And Khan Devlet Girey, who came to power in 1551 year, not only robbed Russian lands - he consistently sought to weaken the emerging Russian state, knowing full well what danger it poses to Crimea. This was evidenced by the Astrakhan and Kazan campaigns of Ivan the Terrible, as well as the numerous attempts of Russian raty to inflict a preventive strike on the Krymchaks. And therefore, Devlet Giray repeatedly made forays into Russia, on the one hand, not to allow her to concentrate forces and respond to him in the same way, and on the other, to plunder and seize captives for sale in Istanbul.

And at the beginning of the 16th century 70, the Crimean Khan had a completely unique chance to turn Russia into a vassal. Russian troops got bogged down in an unlucky Livonian war for them, the forces defending the center of Russia were small, and the country itself was weakened by internal problems, crop failure and plague — there was no reason to expect serious resistance. And this was fully confirmed by the campaign of Krymchaks in May-June 1571 of the year. The forty-thousand-member army of Devlet Giray easily reached Moscow, ravaged and burned the suburbs and suburbs: only the Kremlin and China-City, hidden behind stone walls, remained intact. Along the way, the Krymchaks destroyed another 36 of Russian cities; about 80 thousands of people became victims of that attack, 60 thousands more were captured, and the population of Moscow decreased threefold - from 100 to 30 thousands of inhabitants.

How could it not repeat this success, finally taking the weakened Russia under his arm! In addition, the Ottoman Empire supported the Khan's claims, interested in the disappearance of a new geopolitical adversary - the Russian Empire. So the Russian troops had to prepare as quickly as possible to repel the aggression. That's just to do it was not easy: the entire cash composition of the Russian army near Moscow at that time totaled the entire 20 034 person - yes, the number was established according to the documents of that era with an accuracy of one fighter! In addition to them, there were still about 5 thousands of Don Cossacks under the command of Colonel Mikhail Cherkashenin and a certain number of militiamen. Devlet Giray, in turn, led six more troops to Russia: 80 thousands of Krymchaks and Nogais, 33 thousands of Turks and 7 thousands of Turkish janissaries. 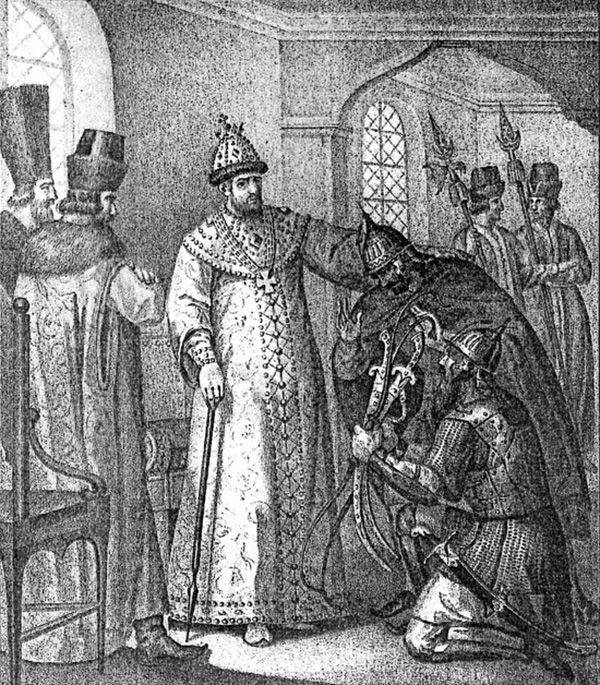 Tsar John IV is awarded trophies taken from Devlet Giray by Prince Vorotynsky, 1572 year. Photo: wikipedia.org
It was probably ridiculous to count on long-term resistance with such a balance of forces - no one expected him to do so. The question was: how to defeat a six-fold superior Russian army in order to permanently alienate the threat of new enslavement from Russia? Ivan the Terrible laid the search for the answer on Zemstvo voevode Prince Mikhail Vorotynsky, in whose assistance the young prince Dmitry Khvorostinin was assigned to the oprichnny voevode.

In this pair of outstanding Russian military leaders of the XVI century, the main role was played by Prince Vorotynsky - as the older and more experienced. By his time, 30 had been years of the military service of Russia: both in the Coast Guard Service on the Oksk frontier and on long-distance hikes. Voevoda Mikhail Vorotynsky was one of the main heroes of the Kazan campaigns, heading whole regiments in them. And he became particularly famous during the capture of Kazan in 1552: it was the regiment under the command of Vorotynsky that was able to first repel the daring counterattack of the city’s defenders, and four days later, at the head of his warriors, seize the wall adjacent to the Arsk gate and hold it for two days.

Dmitry Khvorostinin was younger than Vorotynsky for a decade and a half and became famous a little later. The first major military feat he accomplished during the siege of Polotsk during the Livonian War, freeing the townspeople, who were driven by the enemy into the castle as a human shield, and one of the first to enter the borders of the Upper Castle. Shortly thereafter, the young commander, highly appreciated by the tsar, became one of the oprichnich governors. It was the regiment of Khvorostinin who was the only one of all the oprichnich regiments in May-June 1571 of the year who fought the hordes that attacked Moscow, Devlet Giray, while his other colleagues ran away, leaving the capital to the mercy of fate.

These two commanders became the main opponents of the Crimean Khan, Devlet Giray, a man who spent almost twenty years of his life fighting the Russian kingdom.

Forerunners of the Generalissimo Suvorov

We are accustomed to the fact that the commanding maxim "Win not by number, but by skill" is not only formulated, but also for the first time applied by Generalissimo Alexander Suvorov. Meanwhile, long before the brilliant Russian commander, this principle was often and successfully used by his predecessors. Including - and the governor Vorotynsky and Khvorostinin. Their only chance of victory was to turn the strength of the Krymchak army — its size — into its main weakness. And they successfully achieved this.

When the vanguard of the Devlet Giray detachment was already approaching the Pakhra River, in the area of ​​present-day Podolsk, overcoming the Oka and dispersed the few Russian barriers (the governor in full accordance with the strategic plan!), The rearguard had just passed the small village of Molodi. It was here that he was attacked by the guardsmen Khvorostinin. Their task was simple, but very important: to ensure that the Khan, frightened by the attack from the rear, began to deploy an army from Moscow and transfer it to the battlefield chosen and equipped by the Russians at its discretion. And the suicide attack of the guardsmen was a success. Krymchaks really turned around, suspecting that too lightly crossing the Oka was just a red herring, and the main Russian forces were waiting behind. So it was, with one small exception: these forces waited for Krymchaks not in an open field, but in Gulyai-town - a mobile wooden fortification, a kind of fortress on wheels, armed to the teeth with cannons and foodstuffs.

It was about the walls of this Walk-city that the first, most fierce throw of the Krymchak cavalry, the main force of the attackers, crashed. Yielding to the "panicky" retreat of the guardsmen of Khvorostinin, the warriors of Devlet Giray rode right under the roars of the Vorotynsky warrior. Nomads couldn’t take Gulyai-gorod with a swoop and began to waste energy in new and new fruitless attacks. 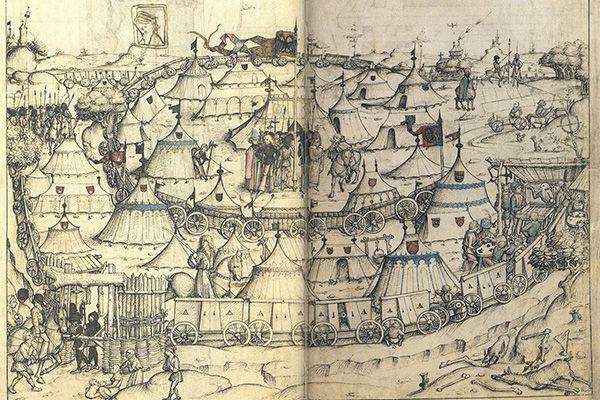 Gulyai-city (Wagenburg) from the engraving of the XV century. Map: wikipedia.org
However, the calculation of the attackers on the fact that sooner or later, the small Gulyai city, small in size and quickly assembled to surrender because of the famine, was almost true. The Russian guards were left far behind: Vorotynsky could not risk the speed of the troops moving to prevent Devlet Giray from breaking through to unprotected Moscow. But when in the Krymchak camp they found out that the Russians began to slaughter and eat their horses, this played an unexpected role for the governor in the events. Delighted by the fact that the enemy began to starve and deprives himself of maneuverable forces, the Krymchak military leaders decided to take a mad step: they hurried their horsemen and threw them into a foot attack on the walls of Gulyai-town without any fear of the Russian cavalry. And this predetermined the outcome of the battle.

Disconnected nomads succeeded in cutting out the few surviving archers from among the three-thousand field barrier to come close to the walls of the Walk-city and literally cling to them with their hands, chopping and shaking the protection of the Russians. At the same time, Vorotynsky, with his large regiment, managed to bypass the attackers in a wide arc, hiding in the ravines, and at the crucial moment strike them from the rear. At the same time, because of the walls of the Gulyai-city, a rapid outbreak was launched — Russian artillery, which the warriors had already mastered very well by that time. This came as a complete surprise to lightly-armed Krymchaks: until now, the gunners were silent, obeying the tactical plan of Vorotynsky.

The outcome of the five-day battle was terrible. The Crimean army, according to some, lost a total of about 110 thousand people. Including all Ottoman cavalry and all seven thousand selected Janissaries died. The losses of the Krymchaks themselves and the Nogai were so severe that only after a decade and a half the Crimean Khanate was able to restore the former male population. After all, on the march to Russia, which promised to be so victorious, according to tradition, almost all young men and men set off, and no more than 10 thousand people returned back ...

Victory at Molody actually put an end to the protracted Russian-Crimean wars. In addition, the defeat of the Krymchak army, and even had such a substantial numerical advantage, demonstrated the advantage of armed weapons and the Russian army passing to the unity of command over the steppe. Finally, the outcome of the battle forever deprived hopes of liberation from dependence on Moscow both the Kazan and Astrakhan khanates (who considered the Krymchaks as their main allies and the last chance to change the situation), and the Siberian Khanate encouraged them to confirm their vassal dependence before the Russian throne.

It is not surprising that historians call the battle of Molodyah the “second battle of Kulikovo”. And it is just as natural that now, when there is no need to adhere to the previous ideologies about the uniquely negative influence of the reign of Ivan the Terrible on the history of Russia, one can recognize that the events of the summer of 1572 have changed the history of our country forever. And we all need to remember this.