Hero Lost in the Snows 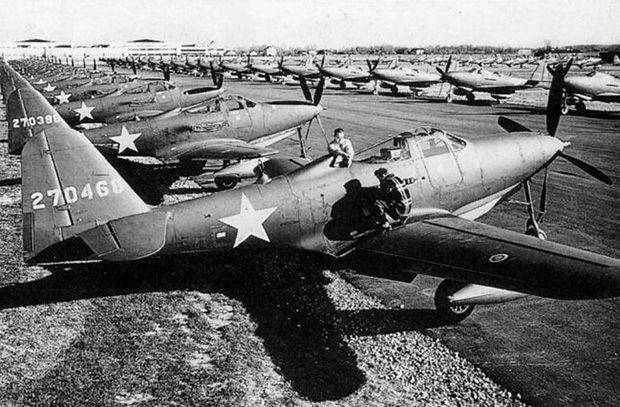 At the airway, which was opened in November 1942, there are several names - “Alsib”, “Alaska-Siberia”, “Krasnoyarsk-Uelkal”, “Krasnoyarsk air route”. For three years of the Great Patriotic War, its existence was kept in the strictest secrecy, because it was used to transfer Lend-Lease aircraft from the USA to Russia.

The route to Krasnoyarsk from the city of Grace Falls in Montana ran through the Bering Strait, Chukotka, Kolyma and Yakutia. To the Soviet pilots, the Allies handed over airplanes from a specially formed 1 th ferry division in the city of Fairbanks, Alaska, and they got the hardest part of the journey, passing through a cold pole, permafrost and endless taiga. To fly more than 6 thousand. Km, the pilots succeeded each other, passing the aircraft on the relay.

The first group of American fighters landed in Krasnoyarsk on November 16 1942. In total, during the existence of Alsiba, 8 thousand 94 combat and transport aircraft were delivered on the highway. They flew to Siberia with a priceless cargo: aircraft engines, gold, mica, medicines, artificial limbs, sewing machine needles and, of course, products.

During the three years of operation of the route, I did not reach the destination of the 81 aircraft, the 115 pilots died. But for many years no one knew about the feat of the Soviet pilots, who enveloped more than half of the globe in inhuman conditions. All involved in Alsib was forced to give a non-disclosure subscription. Only in 1992, were the first memories of pilots and technicians published. RP remembered, along with historians, how they performed the feat in the name of Victory.

The decision to create Alsiba the State Committee of Defense of the USSR was adopted in November 1941. American aircraft could not fly more than 700 km without landing for refueling and maintenance. Therefore, along the whole way, it was necessary to build new airfields, and in unrealistically short terms by peaceful standards.

Construction began in the spring of 1942. It was attended by residents of nearby villages and towns, as well as prisoners of the Gulag. The bulk of the work fell on their shoulders.

“The survivors in Dalstroi recalled that the authorities achieved unprecedented efficiency of work simply,” historian Ivan Savelyev tells the RP. - In the winter of 1941 – 1942, when Stalin set the task to launch Alsib, nobody considered the losses - the front needed airplanes, the route had to be started at any cost.

By October 1942, the 17 new airfields were ready. Also, existing airfields in Yakutsk and Krasnoyarsk were reconstructed. And October 7 1942, the first batch of fighters flew out of Ferbanks. They traveled to Krasnoyarsk for 33 of the day, lost one plane along with the crew. But the beginning of the air bridge across the Bering Strait was laid.

Heaviest in stories Alsiba was the first winter, 1942 – 1943's. Overwhelmingly, the airfields on the Alsiba route were not equipped with warm hangars. Technicians and mechanics had to endlessly repair planes, bring them into working condition, heat them around the clock, so as not to freeze.

I had to work outside without lighting, in the light of a flashlight.

“Mechanics and technicians in the first year of work Alsib had to perform the feat every day,” says Ivan Saveliev. - The pilots stopped flying when the thermometer fell below –50 C °, and the technical staff did not have a weekend in any weather. Amputation of frostbite fingers became common, often cases of frostbite of the lungs were recorded. Frosts were such that when you inhale from the teeth fell fillings. In just one day, when the temperature dropped to –68 C °, 11 people froze.

The pilots had no better than those who served the aircraft. Flying along the Alsiba highway, which passed through the deep rear, was no less dangerous than at the front. If the bombers were still designed to fly long distances, the fighters were not there initially.

Visibility on the Alsiba track was poor. Clouds often stood a layer of several kilometers, through which they literally had to break through. When flying through the Verkhoyansk and Chersky ranges in Yakutia, the pilots were forced to rise to an altitude of 5 – 6 km, and there was often not enough air for the oxygen masks. Maps of the area were inaccurate. There were no reference points that were familiar to pilots — railroads, cities and towns — on giant, deserted expanses. And no one could help them navigate from the ground: the radio transmitters were thin, the radius of their action did not exceed 100 – 150 km. Radio beacons were not, as well as direction finders at the airfields. Because of the magnetic storms, the pilots could not get weather reports, and were not ready for elevation changes. Plus, outboard gas tanks with fuel for long-haul flights worsened aerodynamics and made piloting more difficult. In such conditions, even experienced polar pilots with prewar experience of extreme flights often died.

- Before the war, every flight in this area, not without reason, was considered a feat and a great achievement of the Soviet aviation. The whole country knew the names of the polar pilots who decided on this, ”continues Mikhail Kagarlitsky. 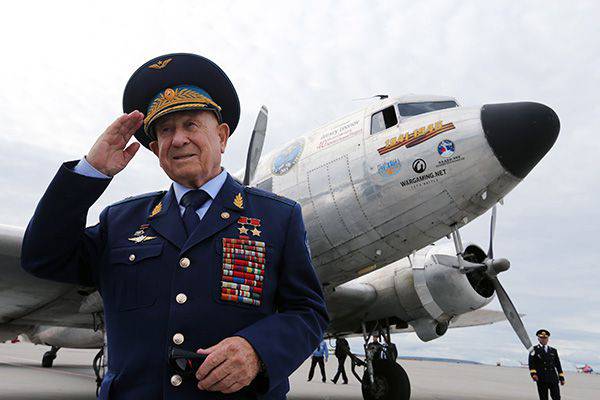 Cosmonaut Alexei Leonov at the ceremony of welcoming the Douglas DC-3 aircraft of the times of the Great Patriotic War, which made the flight “Alaska - Siberia-2015” through the Bering Strait. Photo: Marina Lystseva / TASS
Beginners did not have the skills of blind flights.

“Most people do not even know how to fly on one engine, let alone blind flights,” explains Mikhail Kagarlitsky. - Over time, the pilots gained the necessary experience, but at the cost of large losses. That is why most of the accidents occurred during the first year of operation of Alsib - then 58 aircraft were lost. Over the next two years of the track's work - only 23, although the weather did not spoil it afterwards. In December, the 1944 of the year, for example, for the entire month was only three flying days, but the pilots managed to overtake the 111 aircraft.

When the planes lost orientation, and the fuel was running out, they had to search for the edge in the forest or an island among the tundra to land the plane. It was rarely lucky: there were either swamps or taiga around.

“There were few precedents when, after an emergency landing, it was possible to save both the planes and the crew,” says Ivan Saveliev. - The first such incident occurred shortly after Alsib began work, in February 1943 of the year. The commander of the 1 th ferry aircraft division was the legendary polar pilot, member of the Papanin rescue team, hero of the Soviet Union Ilya Mazaruk. This time he led a group of 12 fighters - the planes always flew like a crane. And here on Kolyma began such a strong fog that there was no way to move on. The planes managed to land on the sand bar by the river.

Fortunately, the village was nearby. Mechanic sent for help. Local fishermen brought a tarpaulin, hid airplanes for them, drowned iron stoves under it all night, preventing the engines from freezing. Fed pilots, sheltered them for the night. It was clarified in the morning, and the planes were able to take off. Usually in similar situations they were doomed.

If the fuel just ran out, there were still chances to survive. And when, because of frost or technical problems, the motor refused - no longer. The pilots had only one thing left - to jump with a parachute. But it was almost impossible to escape this way: the pilots could not walk to the nearest populated point on their own - not the distances. Crews of other planes flying nearby, had no right to come to the aid of comrades: the pilots were ordered to fly to the West, without looking around, whatever happened. Therefore, any damage, as a rule, cost life.

The allies supported the Soviet pilots.

- In December, 1942 of the year on the airfields of Chukotka and Yakutia accumulated dozens of aircraft. They could not fly further because the fluid in the hydraulic systems was too thick. And then American chemists from the University of Alaska literally in two days found a substitute to one of the components, having managed to make the liquid more frost-resistant, - says Mikhail Kagarlitsky.

Alsib's pilots were happy with any help and support, including in the form of watches, cigarettes, which they found in the glove compartments of the aircraft. Every day risking their lives, they received the same salary as in the European part of Russia - all northern allowances in the autumn of 1942 were canceled. And even with such meager allowances, Alsib’s pilots managed to refuse more than 58 thousand rubles to build a house for partisan children, more than half a million rubles to build tank columns, regularly sent to the front parcels with things and products.

Nobody grumbled and complained about the difficulties. Everyone understood that it was necessary to endure and do everything so that American planes would go to the front and help smash the enemy.

- Three times Hero of the Soviet Union, Alexander Pokryshkin, from the spring of 1943, flew the Aerocobra, received through Alsib. On this fighter, he managed to shoot down 48 Nazi aircraft, - says Ivan Saveliev. - And when the Red Army liberated Europe, under the command of Pokryshkin a whole regiment was flying, and then a division. And one and all - on the "Airacobrah", delivered by pilots of Alsib.

For the heroism shown in distilling combat aircraft from the United States to the 30 front of January 1945, the 1 th ferry division was presented with the Red Banner "as a symbol of military honor, valor and glory."