November 24 2015
115
In the 21 year of its turbulent activity in the territory of the capital of Russia, the so-called Scientology Church of Moscow (SPM) should curtail its work based on the decision of the Moscow City Court. The relevant lawsuit was filed by the Ministry of Justice about a year ago, and all this time there was a rather heated discussion about whether or not to remove the Church of Scientology of Moscow from a single register of legal entities. The Moscow City Court decided that it was necessary to withdraw, and ordered the defendant to set up a liquidation commission within the next six months and complete all the required liquidation measures.


It should be noted that SC had problems with Russian legislation before. Back in 90, Scientologists were denied re-registration of their church. After that, the lower house of the Russian parliament passed a special decree, in which the Church of Scientology was recognized as a destructive religious organization.

In 2010, in Khanty-Mansiysk, the court found some literature extremist, the author of which is Ron Hubbard - the man who is the creator of the Scientology school based on the so-called "mental health practices." In 2012, the Moscow Regional Court did the same, banning the distribution of a number of books by Ron Hubbard in Russia. 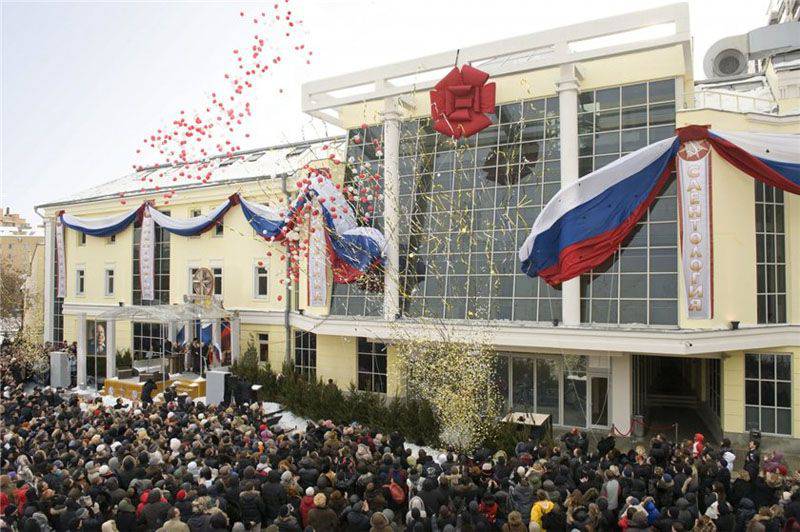 Photo of the opening of the Church of Scientology Moscow

All these years, Russian Scientologists have not abandoned their attempts to re-register their “church”. The last attempt in the summer of 2015 was rejected by the Izmailovsky Court of Moscow, which, relying on expert data, issued a ruling that SC could not be considered a religious organization at all.

The basis of Scientology, according to the same Hubbard, is “a movement along the steps of development,” which ultimately should lead to “complete freedom”. As it turns out, Scientology does not initially provide for the attainment of this complete freedom by a person who does not have a sum with five zeros in dollars in his pocket or in a bank account. So, the course of achieving “complete freedom” for American representatives of the organization costs about 350 thousand dollars, - which is what in its book “Sectology. Totalitarian Sects ”writes Alexander Dvorkin. It turns out that low-income people are not those who may be interested in the Scientology system, which clearly resembles a business project, and the word “church” here seems to be one of the attempts to disguise profitable business statements on the organization’s religiousness. The goal of the Scientology school is to put a person on the doctrine so that eventually his business (his means) becomes the business of the “church”. A kind of financial pyramid scheme.

The lawsuit filed by the Russian Justice Ministry states that the statute of the Moscow Church of Scientology does not comply with the principles of freedom of religion, and the word Scientology itself has nothing to do with religion and has long been registered as a trademark of the so-called US Religious Technology Center. Indeed, it is difficult to talk about free religion, if you need to have a very substantial amount and certainly share it with the "church" ... Of course, there are those in recognized churches for whom religion is reduced solely to donations to the needs of the church itself, but in Scientology This principle was raised to a special degree.

The Center itself, by the way, exists due to the fact that it receives funds from the exploitation of everything related to Scientology and the distribution of Hubbard literature (1911-1986). In fact, any mention of the term “Scientology” is announced by the Center for Religious Technology by borrowing, and therefore the persons who use it must make certain contributions to the center.

The Church of Scientology of Moscow stated that they would appeal the decision of the Moscow City Court, adding that the decision allegedly did not comply with Russian legislation, since the symbols of the SC and literature “were not recognized as extremist in Russia”. Apparently, the representatives of the SC somewhat forget about the decisions of the court of the Khanty-Mansiysk Autonomous Okrug (2010) and Moscow Region Court (2012), which, in fact, became a precedent.

Something about Scientology, which adepts call religious organization.

One of the main contradictions that one striving to achieve is “complete freedom,” that according to Hubbard, Scientology is a trend in “religion” that cures any diseases, but not all are cured ... According to Hubbard, Scientology " helping to cure cancer, ”and that modern medicine is simply not needed by a Scientologist. This statement, made by Hubbard in the 70s, attracted thousands of new adepts around the world to Scientologists. Diseases of sect members were explained by the fact that they are not actively investing in the “religion” and pay little attention to it. What is called, the cognitive dissonance of the adepts came at a time when it turned out that Hubbard himself was ill with cancer, and for some reason, Scientology did not help Hubbard escape the disease.

The most extensive clause of the Scientologists' charter, for example, Europe is the item "Capital", which, as it were, already says a lot ... And although the first place is that the association does not aim at making a profit from its activities, reality, everything looks exactly the opposite.

From the charter:
P. 3.11. Assistance to “closely related persons” includes:

Sale, exchange or long term rental property.
Loan funds or loans.
The sale of goods, services or agreements regarding the use of equipment under conditions more favorable than the corresponding conditions provided to independent third parties. If personal work is paid, then, among other things, the requirement is that the work produced is justified and necessary for the activities of the association.

P.4.4. Rules regarding the amount and payment of membership fees are established by the board of directors.

P.4.6. A member may terminate his membership at any time. but without having to get their contributions back. The resignation letter must be written and signed by the outgoing member.

Some time ago, in Russia, the view was expressed that Scientology was seen by so-called “post-totalitarian” countries as “especially interesting countries”. Allegedly, in such countries, to which Scientologists ranked Russia as well, with the help of Scientology approaches one can “build a new society”. The new society seems to be the one that allows the authors themselves to pull out all the resources, which, in principle, happened in the so-called post-perestroika era, when various sects and “interested investors” literally attacked Russia in order to snatch a piece bigger and more pleasing.

According to some reports, members of the Church of Scientology are individual representatives of the current Ukrainian authorities. Although the SC itself refutes these statements, but the principles on which the Ukrainian Cabinet, for example, works, in many ways resemble the SC’s ideas about building a “new society” by sucking out of the country all that at least some value.

Ctrl Enter
Noticed oshЫbku Highlight text and press. Ctrl + Enter
We are
Genocide of Christians in the Middle East. Millions of people have become a bargaining chip for American geopoliticsSituational analysis of the death of the MH17 flight (Malaysian Boeing 777), made on the basis of engineering analysis from 15.08.2014
Military Reviewin Yandex News
Military Reviewin Google News
115 comments
Information
Dear reader, to leave comments on the publication, you must sign in.