November 24 2015
43
Will the centurion Parasyuk become the Führer of ukronaci? He has just accomplished his first feat, which will undoubtedly enter history the Nazi revolution: kicked the general of the SBU foot in the head in the style of "mad horse". General Pisnoy, judging by his media dossier, is an excellent scumbag, but the matter is different: this is a significant blow! The revolutionary centurion scored the old-fashioned general! 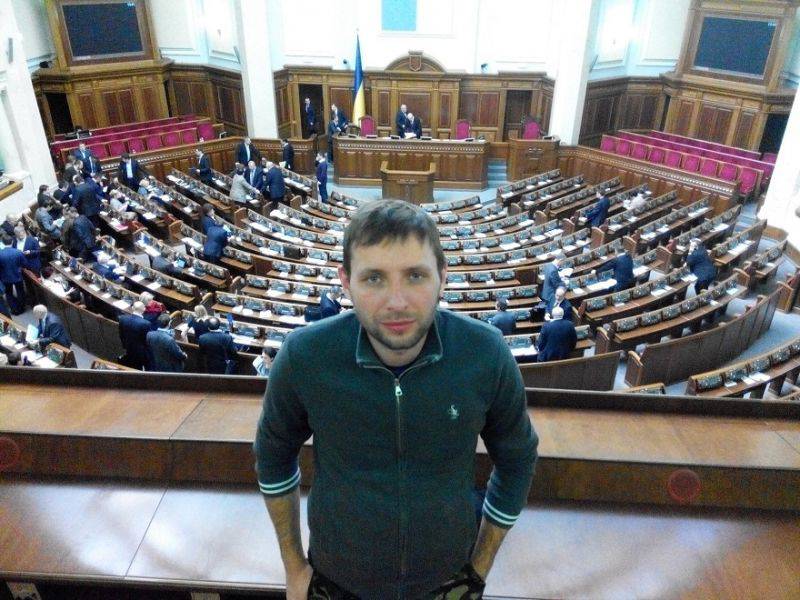 And silence ... The statement of the general on the centurion was taken by the GPU to be produced ... And the centurion Parasyuk, meanwhile, is performing on the Maidan and is preparing to make a tour in Krivoy Rog, which is the symbolic name of this city. For practicing Parasyuk strike "crooked horn"? In this unfortunate city, people's deputies from the Bandera people led by Semyon Semenchenko are preparing to introduce “direct democracy”, having previously “cleared from traitors”.

From the tribune of Maidan Parasyuk, in absentia, already slapped Poroshenko: “You are an agent of the Kremlin! We are not rocking the boat! ”Then he added a parliamentary word, it’s not for nothing that he sits in the Rada,“ it’s necessary to change the elite ”. But he ended up as a centurion: “Tse is a gang. Poroshenko - the second Yanukovych. Gang - get out! "

Even here, in Russia, it’s scary for the remnants of Ukraine, how many Parasyuk are there ... And one of them could be the next president of Banderia. And the European Commissioners will have to take it, and smile and shake hands. Otherwise, they can run into a “mad horse” blow from the centurion's guide. Euro-associated now!

The revolution has a beginning, there is no end to the revolution, and here the Bandera masses started talking again about continuing the revolution, because for two years Parasyukov and Semenchenko have greatly increased, the ATO no longer holds them. They now have their people's deputies, who suddenly realized that the main front was in Kiev.

Unfortunately for the Kiev authorities, besides the revolutionary centurions, there are two more Crimean Tartars, professional patriots, Dzhemilev and Chubarov, who are exceptional, and not some: they dream what to undermine in order to harm the Crimea.

Only two ... Yes, "a small bug, yes smelly," said the classic, and these two bugs managed to organize an undermining of power lines in the Crimea, and substitute the whole of Banderia under attack. Crimea has been preparing for this shutdown for a year, and calmly, without panic, introduced emergency situations, launched its autonomous generation, and in less than a month will receive an energy bridge from Kuban. But Banderia can run into major energy and political trouble, in addition to losing the flow of electricity from Russia. This is a reason to accuse Kiev of state terrorism, and Moscow is now considering options ...

The point is not even in the possible revenge of Russia. We are talking about the safe operation of the Ukrainian nuclear power plants, for which such emergency shutdowns are very dangerous. In addition, it was necessary to increase the load on thermal plants that operate on coal. By the way, Russia has ceased to ship coal for Ukraine, according to the information of the same Dzhemilev, and this threatens the work of 7 TPP in Ukraine. There are a lot of nuances in the energy industry, and it doesn’t like when it is suddenly blown up. There is a certain pattern that professional ignoramuses always become professional patriots.

Oh, God, how can Gogol not be remembered here, now not every Crimean Tatar will fly to the Crimea, after such a trick to its inhabitants. And in general, Banderia became a terrorist country at the request of just two or three idiots. She carved herself as a non-commissioned officer widow. Glory to Heroam!

And on the bench sit Nazi-Kombat Semen Semenchenko, Andrei Biletsky, and Dmitro Yarosh himself. In fact, according to independent experts, the greatest chances for Poroshenko’s presidency are in Lviv’s head of the Garden, the leader of the “Self-help” party. Because he has a “Finnish back” from Russia, he said in his interview. And he is recognized as the most intelligent Bandera.

To be Sadovy the next president-president, if he can cope with Parasyuk, which is far from a fact, because there are many of them. And you also need the blessing of overseas Ambassador Jeffrey Payette. Here he can compete with Yulia Tymoshenko with “Batkivshchyna”.

In Poroshenko, the “moment of truth” comes, one might say, it passes the point of no return. Either he will immediately introduce a state of emergency in the country, dismiss the parliament and declare the presidential dictatorship, or tomorrow he will not be able to do this. And Parasyuki will introduce him to the “mad horse” fighting style.

... I wonder how the State Department will close this ukrotsirk? Russia is one thing is important: do not scare to the time

Ctrl Enter
Noticed oshЫbku Highlight text and press. Ctrl + Enter
We are
New plants and workshops in Russia in 2015 yearOn the Maidan had fun, while the Crimea did not lose
Military Reviewin Yandex News
Military Reviewin Google News
43 comments
Information
Dear reader, to leave comments on the publication, you must to register.